The Difference between Ranking Above & Below the Fold (A CTR Study)

It was such a good question, I wish I would have thought of it myself. But I didn't. Nati Elimelech, a masterful and underrated technical SEO asked it. The question you ask? What does Click-Through Rate (CTR) look like above the fold versus below the fold? I told you it was a great question.

The question being, as good as it is, doesn't make it an easy one to answer. In fact, it's more than a little complicated. After all, you have to discount the first organic result being above the fold to a certain extent considering it's the first result folks see regardless of its "fold" status.

Complications aside, for the moment, let's explore what CTR is above and below the fold for sites on page one of the Google SERP! 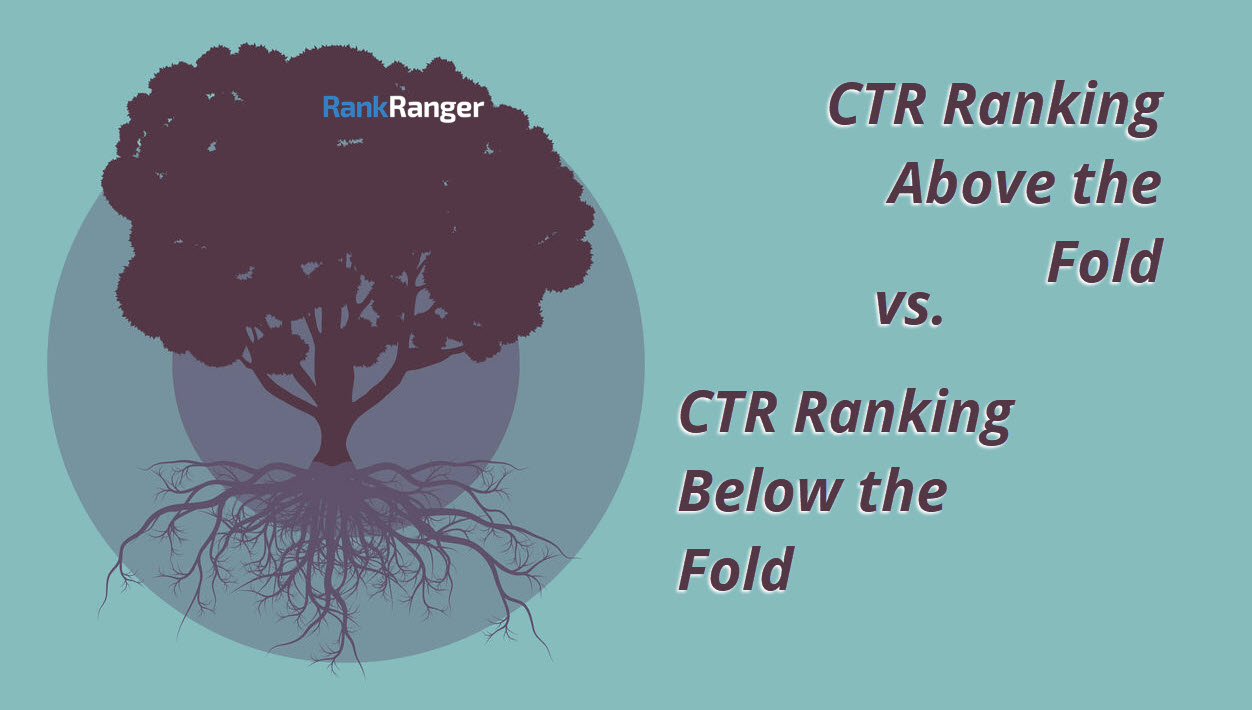 That said, it's a bit more complicated than that. I analyzed (admittingly at the aforementioned Mr. Elimelechs' behest) CTR for a total of 3,500 URLs (namely their ranking position and CTR). The problem is, the total number of URLs here is a bit misleading. Sure, 3,500 URLs reflect a lot of results on the SERP. However, in that set are URLs that rank #1 on the SERP. How do you compare ATF and BTF data on a site that ranks #1 on the SERP? The same for a site that ranks #10 on the SERP. There's nothing to compare it to.

So you can analyze 5M URLs and you still wouldn't necessarily know much. What needs to happen is a comparison between the ranking positions that appear at times both above and below the fold. This would be positions 3-5. Even this has its own complexities and limitations.

For this study, while I will at times make use of the full data-set, I'd like to hone in on about 1,500 of the 3,500 URLs I looked at. That is, those specific results on the SERP that ranked between positions 3-5, i.e., the positions that can fall both above as well as below the fold depending on the keyword.

One last note on the data. In gathering results and their CTR, I very much wanted to present a normalized picture. As such, included in the data-set are results that had a CTR of upwards of 40% as well as results which had a CTR of less than 1% for the same ranking position on the SERP. In other words, the data you see here may show CTRs that are lower than you expect. This was done on purpose to better reflect the overall CTR per position that a normal site may see for its ranking keywords overall. To this, the focus of the study will not be on the CTRs per se, but how they differ above and below the fold.

Surveying the Field: CTR at the Very Top of the SERP

Let's start off by looking at what CTR looks like at the very top of the SERP. Again, this won't really tell us the impact of ranking above the fold relative to ranking below the fold. Rather, this will tell us what it means in terms of CTR to rank above all other organic results. Below is the CTR for both position 1 and 2 on the Google SERP: 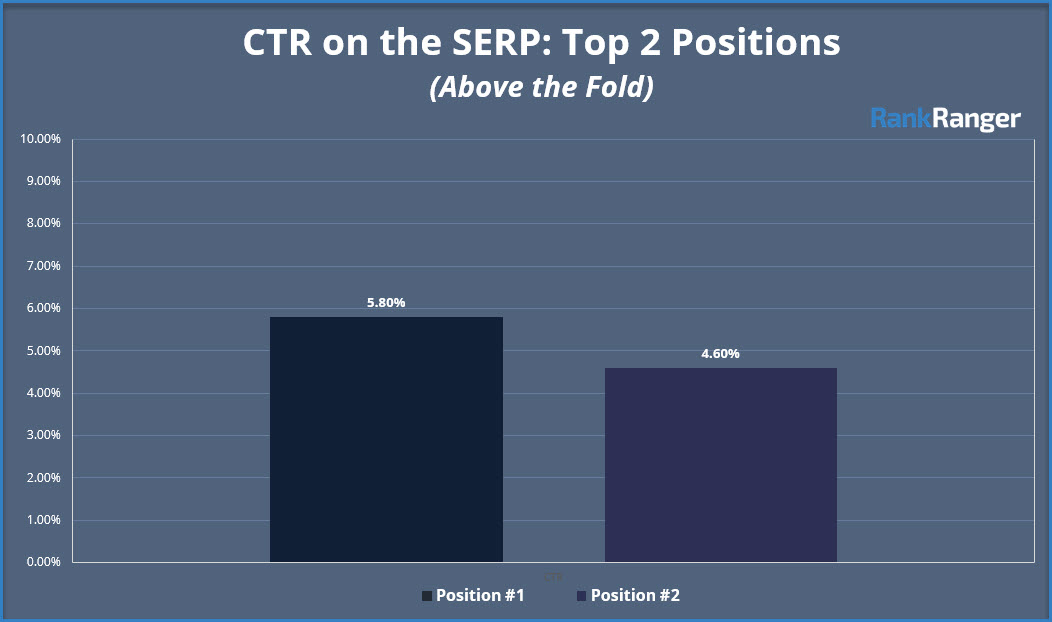 *The CTR presented here includes a balanced set of URLs as mentioned earlier. This means there are URLs with CTRs of more than 40% and URLs with extremely low CTRs included. That is, this is an extremely normalized data-set. The same applies to the graphs that follow.

The most noticeable takeaway is the 20% drop-off in CTR from the 1st to the 2nd position. While you could sound the alarm bell here, I would venture to say that a 4.6% CTR would make many do a bit of a jig. That is, I don't buy into the narrative that ranking at the very top of the SERP is a must, nor do I think that the data here supports that notion.

Looking at the top 5 positions on the SERP and what we are seeing is that CTR falls off proportionately as you move down the results page even when the URLs appear above the fold: 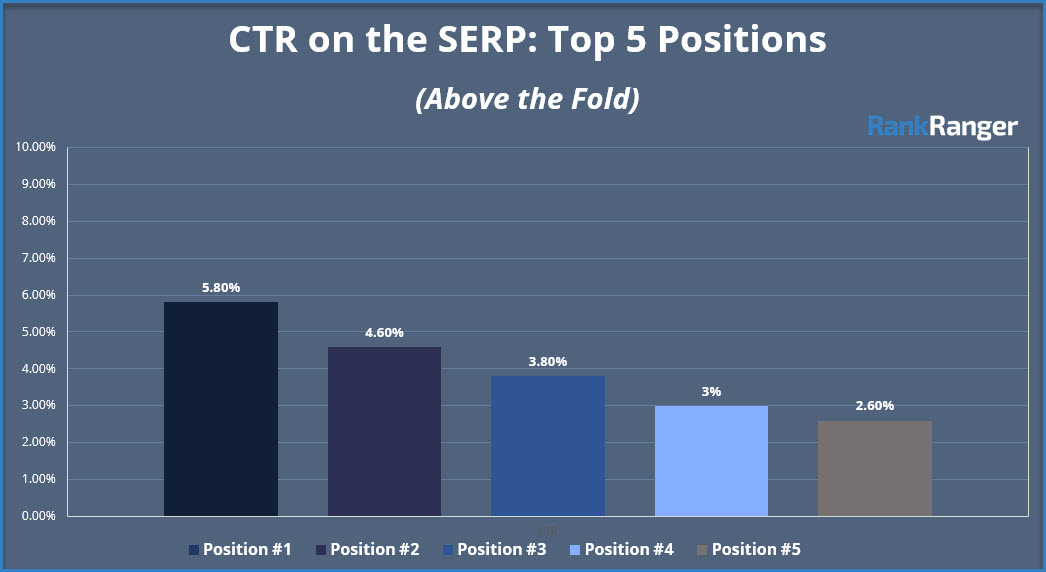 As interesting as this data is, let's use the above breakdown to analyze the potency of ranking above the fold vs. below the fold as this is the essential focus of this study.


Comparing CTR Above the Fold to CTR Below the Fold

As I mentioned, as enticing as it would be to analyze the CTR of positions 1 and 2 on the SERP to highlight the impact of ranking above the fold, doing so, while not impossible, is very complex. The reason, again, is that there is simply nothing to compare the URLs to. With that, what I do think offers insight are the ranking positions that can fall either above or below the fold. To varying extents (which is another limitation of this data) we're talking about positions 3, 4, and 5.

When looking at these ranking positions on the SERP, as you would expect, there's a significant difference in CTR when the positions are shown ATF vs. BTF. 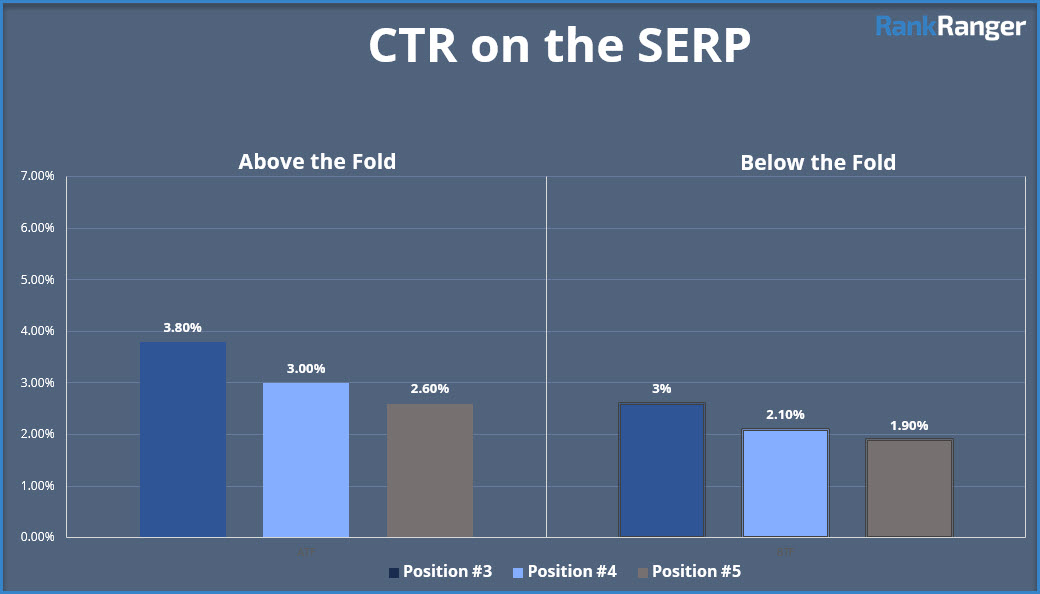 
The self-evident nature of the above data aside, there are some interesting tidbits here. For starters, the gap between above the fold and below the fold CTR narrows as you move down the SERP. For example, the CTR of position 3 ATF is 32% more than when the position is shown BTF. However, position 5's CTR is only 27% higher when the position is displayed ATF.

Also interesting is how the decrease in CTR plays itself out as you move down the ATF portion of the SERP relative to the BTF SERP. 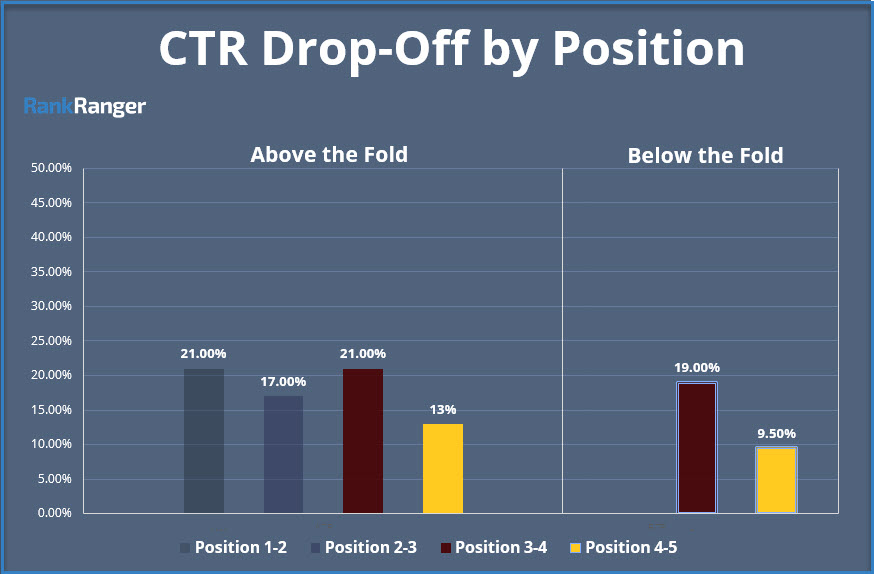 
CTR Above the Fold - CTR Below the Fold: What Does It All Mean?

Clearly, ranking above the fold is better at driving clicks. To qualify that, it's about 30% better at driving up your CTR between positions 3-5. To perhaps put this more concretely... the data shows that ranking #5 above the fold is literally the same thing as ranking #3 below the fold (from a CTR perspective). Thus, you could argue that ranking below the fold, at whatever position you are, is a two-position deficit relative to ranking above the fold. Obviously, that's not a very scientific way to formulate the equation, but it does drive the point home.

That said, not all positions are equal in that regard, the data does show a consistent theme in the difference between ranking 4 and 5 on the SERP (whether ATF or BTF) not being as stark as ranking at the 3rd position relative to the 4th position. As is evident, ranking #4, and how users interact with the position, has less to do with being ATF or BTF and more to do with how users relate to results that far down the page. There seems to be a cognitive cut-off in how users interact with the SERP, with position 4 being that cut-off. Meaning, users, it would appear, relate to positions 1-3 in one way and position 4 and beyond another way regardless of if these results are above or below the fold.

The decrease in the drop-off in CTR from position 4 to position 5 points to their decrease in relevancy from the user's perspective. Rather than being some sort of normalization, the data would better point to the absolute loss of relevancy position 4 (and below) conjures up for users relative to the top 3 slots on the SERP. 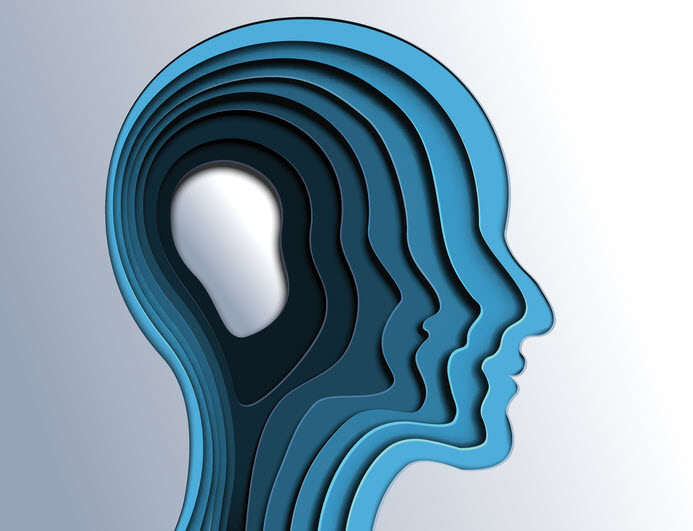 I expected to walk away from this study confirming my belief that ranking ATF is incredibly more important than ranking BTF. And while the data does show that notion to be true, it also points to another narrative, user psychology. It appears to me that ranking at the top of the SERP and the impact it has is a combination of visibility and user association.

The role of user psychology vis-a-vis ranking position perception is evident in the smaller CTR drop-off seen at the 4th position both ATF as well as BTF. Seeing a steeper drop-off in CTR from position 3 to position 4 only to see that drop-off normalize a bit when looking at position 5 relative to position 4 indicates there is a sharp contrast between ranking #3 and ranking #4 on the SERP. Being that this pattern is evident both when the positions are displayed above and below the fold necessitates an outside factor be at play. If not visibility and accessibility, this factor, applying Occum's razor, is user perception in terms of the ranking positions themselves.

User psychology and the authority associated with each ranking position are worth analyzing on a per vertical basis and in my opinion, should accompany the data on CTR above versus below the fold as presented here.

Rank Ranger Updates
Core Rank Tracking - A Local Enterprise SEO Tool November 3, 2021 Announcing The SERPulator: A Free Meta Tags Preview Tool! March 10, 2021 Google Keyword Planner Search Volume Affected by Google Advertising Policies December 2, 2020 Google Web Stories Tracking November 25, 2020 Share of Voice - A 30,000-Foot View of Your Organic Rankings October 28, 2020
All Updates
Subscribe & Receive Updates
Get a Free Trial     Request a Demo
Related Articles
Why Ranking Above the Fold Matters More Than Ever (& How to Get There!) How to Create an SEO Dashboard Core Rank Tracking - A Local Enterprise SEO Tool How to Use Google Search Console to Improve Your Rankings Why You Need Pixel Rank Tracking for Your SEO The Hands-On Guide to Winning Featured Snippets (Part 2)