Back when AMP first entered Google's mobile News Box in early 2016, the faster loading, lighting bolt indicated cards were a rare novelty. When we initially started tracking the percentage of AMP results within Google's mobile News Box, the numbers were not extraordinary at all. Forget seeing a majority of results within Google's Top Stories being AMP, not even a quarter of the results showed with the AMP icon according to our initial data. Over time the number of publishers optimizing for AMP has grown. Concurrently, the number of AMP articles within Google's news results has also increased (as has the number of countries showing AMP within their News Boxes). Still though, in most instances you're talking about 25% of news results being AMP, maybe 35% on a good day. All of that has now changed as the number of AMP optimized news articles appearing within Google's Top Stories on mobile has skyrocketed across the globe.

As I mentioned, when we first started tracking AMP within Google's mobile News Box, the number of AMP optimized articles was not exactly overwhelming, and of course as a new concept, that made a lot of sense. On our very first day of tracking AMP within mobile news results, we showed data for three countries (the US, UK, and Spain), with the highest percentage of AMP in news results among them being 17.75% (UK). 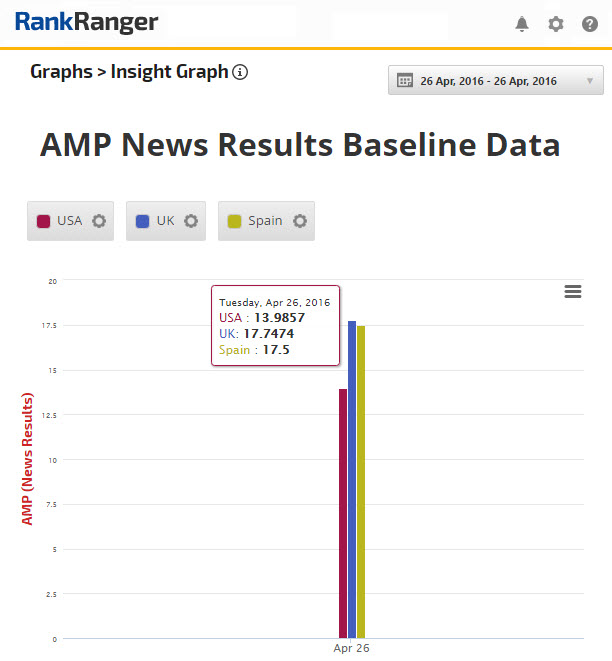 In truth, the numbers did not increase to the extent you may have expected them to as time went on (especially considering the emphasis Google has placed on AMP). By the end of 2016, AMP had yet to regularly approach the majority of news results, with many countries being a long way from the 50% mark.


Fact is, countries like Australia and Germany still showed mobile News Boxes with less than 1/5 of the results being AMP by December 31, 2016. In the case of Australia, AMP hadn't appeared within their Google news results until August 2016, a good five months after AMP entered Top Stories in the US.

With the historical data above in mind, it seems that AMP's fortune within new results has dramatically changed. As of today, of the 12 countries we show displaying AMP news results, only one (Japan) has a mobile News Box containing less than 50% AMP results within it. 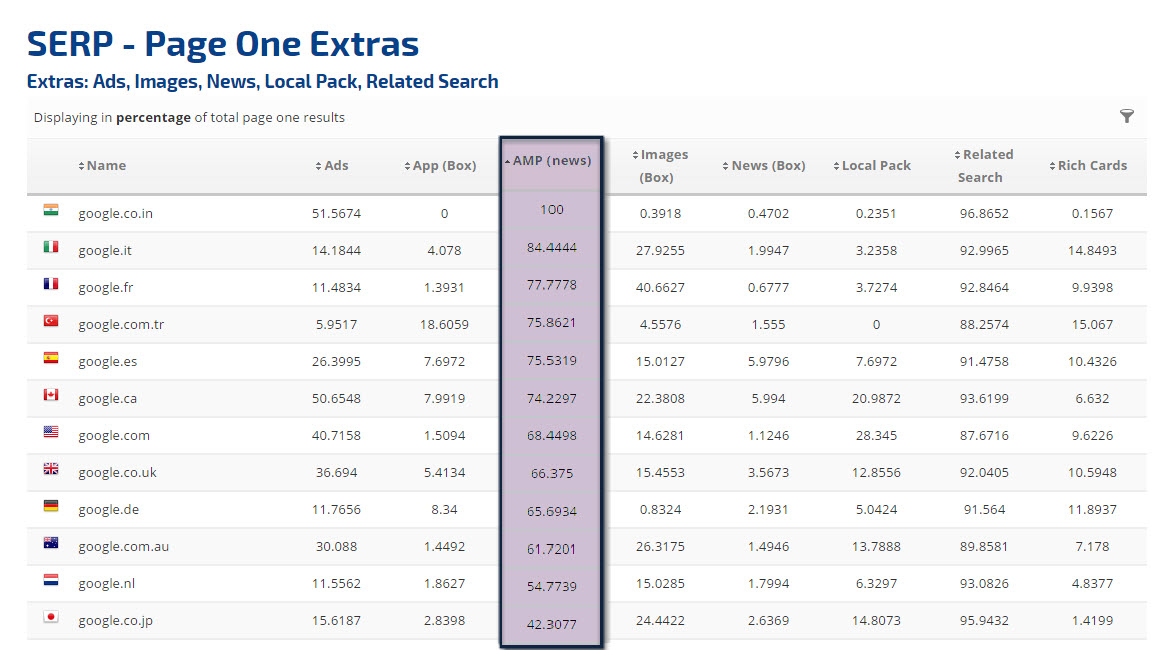 As of January 30, 2017 only Japan displays less than 50% AMP results within Google's News Box


Generally taking place between January 26th and 29th, we first tracked the increase in AMP optimized new results in the US. Where on January the 25th we had seen only about 30% of mobile News Box results in the US showing as AMP, that number more than doubled via a 70% showing on January 29th.


This data event was replicated across the globe with huge increases across the board. Take France for example, on January 25 - 26 AMP within news results was statistically 0%. Yet, just a few days later 78% of all News Box results on the French mobile SERP were AMP.


Just by way of example and looking at data from 14 days out as a baseline, AMP within Google's mobile New Box increased fifteenfold in Australia, sevenfold in Italy, sixfold in Germany, and more than doubled in the UK.

Saving the best for last, 100% of all the results in Google's mobile News Box on the Indian SERP are now AMP. Just consider that as of January 1st, India did not show any AMP articles within mobile's Top Stories.


Google News Box - Going All in for AMP

The spectacularly steep spikes in news oriented AMP results begs the obvious question.... is Google going all in for AMP within its news results? Meaning, is the recent global AMP spike indicative that Google desires all its mobile news results to be AMP? Does the global spike in the number of AMP optimized News Boxes reflect a push for the format to completely takeover Google's news cards and carousels on a global basis? If so, the implications for publishers are simply huge and presents them with the message that they need to go AMP or fade away to SERP irrelevancy in so far as News Box results are concerned. Regardless, the recent data should be enough to tell publishers that are not on board with AMP as of yet to quickly climb aboard.