Google is one step closer to fostering an era of a faster, more nimble mobile web experience. True to its word, the search engine has placed AMP pages within the blue organic results. As speedier pages with their lightning bolt icons began to appear within organic links, Rank Ranger began working on tracking it with our Mobile SERP Feature Tracker. We are happy to announce that Rank Ranger is now monitoring AMP within both news and organic results on mobile.

An Insight Graph showing a variety of organic AMP data

Mobile-Friendly Out & AMP In

Just recently Google retracted its Mobile-friendly label from within organic results. Looking back at the label’s removal within the current context, it would appear that Google removed it to pave the way for the AMP indicator within the blue links. In fact, Google’s reasoning behind the mobile-friendly label’s retirement was specifically to make the mobile SERP less cramped. This statement is all the more logical considering Google planned to insert the AMP icon within organic results (and now officially has). Could you imagine how oddly stuffed an organic result on mobile would appear with both labels present?

Rank Ranger – The First to Track AMP in Organic Results

We've been tracking AMP within news results for a few months now, and upon seeing the rollout of AMP within organic results we worked to incorporate the new data into our tracking tool. With lightning speed (pun intended) our development team quickly began tracking AMP within organic mobile results. As a result of their quick action and late hours, I am proud to inform you that the Mobile SERP Feature Tracker is now the only SERP tool tracking AMP according to a variety of metrics that includes organic appearances as well.  We are tracking AMP in a variety of ways in order to offer a comprehensive picture of AMP performance on Page One of the SERP.

Percentage of Page One SERPs with an AMP Result

We are tracking the percentage of Page One SERPs that include at least one AMP result within them. This percentage includes any form of AMP results, either as part of a News Box or within organic results. So long as an AMP result of any kind appears on Page One of the mobile SERP, it's counted.


The Percentage of Page One SERPs with an Organic AMP Result

Once the tracker shows you how many Page One SERPs include at least one AMP result in any form, you are able to then hone in on just "organic AMP." The AMP - Organic % metric presents how many mobile Page Ones had at least one organic AMP result on it.

Our AMP data collection continues with a tracking of the Page One results themselves. Once we know the percentage of Page One SERPs showing an organic AMP result, it would of course then make sense to tell you how many of the organic results, on average are AMP and how many are not AMP.

The Percentage of News Results that are AMP

This is the original metric the tracker has monitored over the last few months in regards to AMP. Since AMP originally rolled-out within News Box, the Mobile SERP Feature Tracker tells you the percentage of articles within News Box that are AMP optimized. 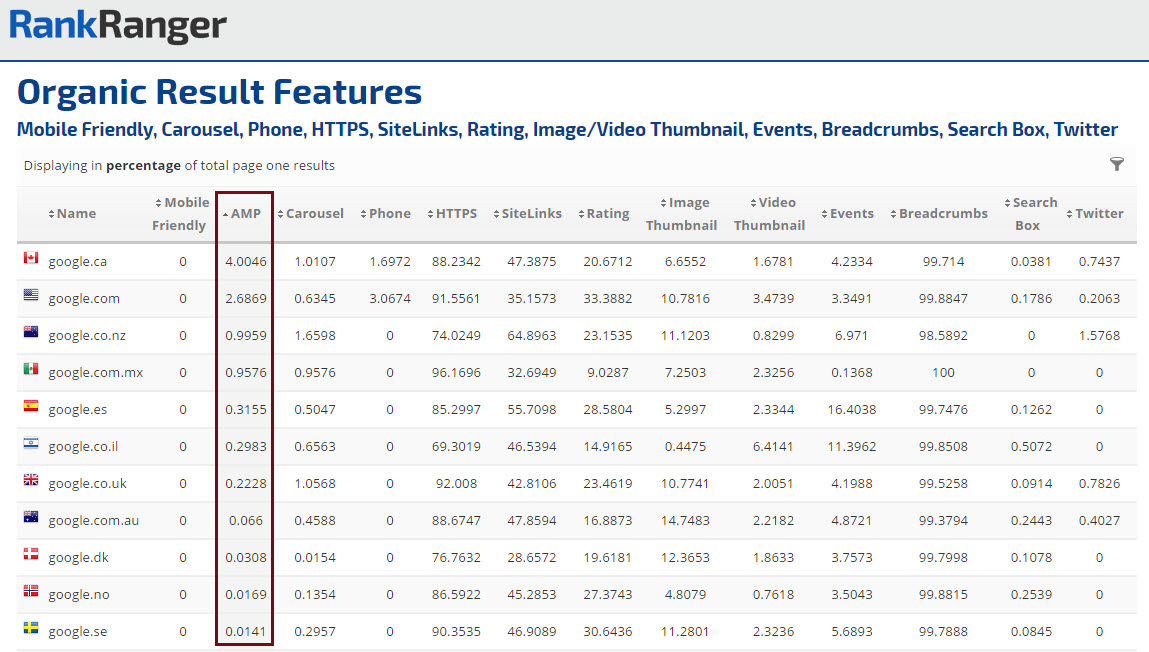 
A Thing About Organic AMP Results

Our tracking of AMP within mobile organic results has shown us that AMP optimization has sped across a variety of industries. When we first starting recording results, we quite expectantly saw organic AMP results in relation to keywords associated with the news. Keywords like hillary extends lead, obama un, and s&p pattern resulted in a SERP with an organic AMP result on it. 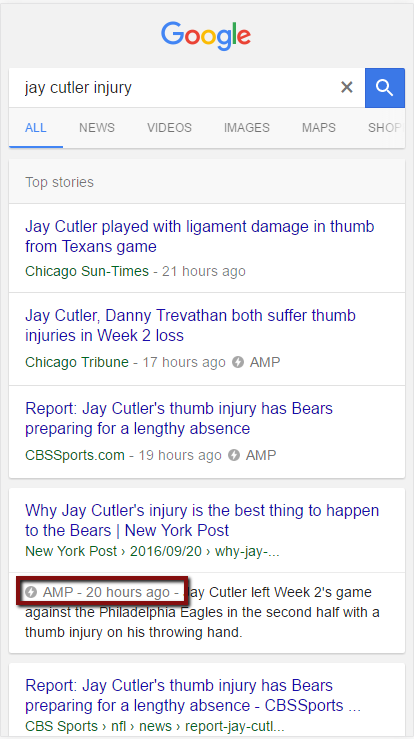 An organic result related to the news with an AMP icon

As the data began pouring in, we saw that AMP has truly expanded past the news industry. Keywords like "natural flea killers", "house flipping loans", "hideable flask", and even "dating sites for over 60" all produced SERPs with organic AMP results. 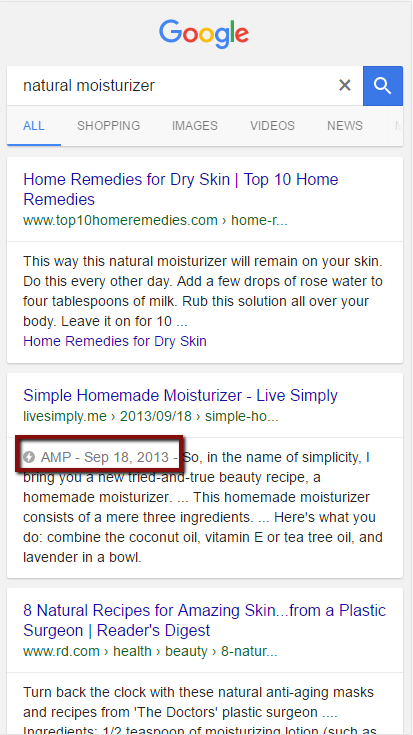 Not only are we presenting the developing data on AMP within organic search via our tracking tool, we are also reporting on it internally, within Rank Ranger’s SEO software. Back in the end of March, we announced that our rank tracker dashboard began indicating for each keyword which SERP features were attached to your landing pages which ranked for that keyword. With the addition of AMP to mobile organic results, our rank tracker dashboard will now indicate if your pages were picked up by Google as being AMP optimized – and it does the same for your competitors' pages as well.


Since AMP optimization is a conscious effort, users who have optimized for AMP could and in fact should expect their site's pages to show on the SERP with its AMP status indicated. Having the AMP icon at your disposal within our rank tracking dashboard affords you the ability to ensure that indeed your pages are being shown as AMP optimized on the SERP (that is without doing a manual search for every one of your keywords). Seeing one of your pages ranking within results but without its AMP status could indicate a problem in its optimization process.


Some Perspective on AMP

There are a lot of different theories out there as to why Google is pushing AMP so hard. These theories range from an altruistic wish to see the speed of mobile web pages speed up to Google wanting to keep webpages within its ecosystem (since AMP pages are cached).  However, from a contextual perspective, Google's inserting of AMP into organic results on mobile comes on the heels of its removal of the Mobile-Friendly label. Apply some poetic license, it's as if Google is saying, "well the mobile web, at least 85% of it, is mobile friendly, time to move on to the next mobile web upgrade." The question of course is, will Google's success with mobile friendliness continue with its push for AMP optimization. As I mentioned, AMP is not without its controversies, so predicting its popularity is a bit more difficult. Until a final determination can be made, we'll be carefully watching – and tracking.