Turning Up the Volume: Rethinking the SEO Impact of Google AMP 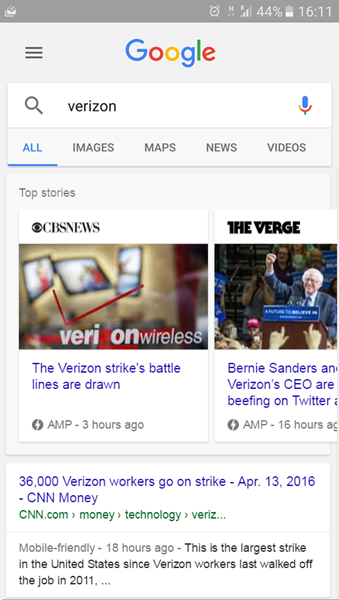 If mobile mania is not here yet, you can bet your life it will be. With smartphones as the most popular way to access the internet, along with the continued rise of mobile ad revenue, predicting the increased role of mobile-friendly sites doesn't exactly require a prophet. It also doesn't take much to notice that Google is ever increasing its focus on the mobile web and mobile-friendliness. As a result, you may have upped the attention you pay to your mobile SEO, and rightly so. However, is aligning yourself to mobile algorithm updates like the one coming out this May, the only method of riding the mobile wave to the top of the SERP?

Google rolled out support for the Accelerated Mobile Pages (AMP) project in late February. Since the project marched onto the stage there's been a decent amount of chatter as to its SEO impact. Google took notice at the onset with Googler John Mueller saying, "Is AMP a ranking signal? At the moment, it is not a ranking signal." Can't really get much clearer than that! Recently, the topic of AMP has taken a slightly different twist. Mr. Mueller has again been making some interesting statements about the project. More on that shortly, let's first take a look at what AMP is.

So what exactly is AMP? Before I describe what it is, let's understand where it came from. You know that really annoying mobile webpage that loads...eventually, and as it does undergoes seismic shifts with the insertion of every single image so that by the time your page loads you're not only that much older, but dizzier as well? This is why we have AMP. The AMP project's major goal is to significantly increase the speed at which a mobile page loads. An AMP page is then a page that has been optimized in a specific way to meet this need for speed.

Sounds great, right? But how does it work?


How Does AMP Work?

Imagine AMP as the sort of structure or even the template of fast mobile page creation. AMP uses a markup language appropriately called AMP HTML. It is as it sounds. AMP HTML is essentially a sort of subcategory of HTML that has its own custom tags coupled with numerous restrictions that are designed to increase speed.

Along with AMP HTML there is also AMP JS. Remember our problem with the dizzying way pictures can load on your mobile device? Well AMP JS is meant to be the solution. What Google has essentially done is to lock and limit the JavaScript library, eliminating scripts such as third-party JavaScript. With a set library of AMP approved scripts, page speed is designed to increase.

Lastly, there's AMP CDN (Content Delivery Network), which was implemented to incentivize publishers to create AMP pages. Once Google sees that you have set up an AMP optimized page, they will retrieve the page and cache it. The AMP CDN as Google themselves puts it, "improves page performance automatically."

To elaborate and clarify a bit further, an AMP page is not a new page per se. An AMP optimized page is precisely that, a preexisting page that has been optimized. Note, that this in a sense creates duplicate content which as we know is an SEO no-no. This odd scenario would as a result demand a canonical tag, which is in fact a part of the AMP optimization process.

While the AMP project portrays itself as a sort of philanthropic process for the greater mobile good, it does have relevant SEO meaning. This is where we get back to John Mueller's recent comments on the topic. We noted earlier that he stated that AMP optimization does not serve as a ranking signal, so what then is the SEO impact? In fact, a lot of us are mainly familiar with AMP only in so far as the carousel of "newsy" items that displays in a mobile search is concerned. You might be thinking, "If my site is not "newsy" do I really need to be concerned with AMP?"

Great question, we're glad you asked. Indeed Mr. Mueller coincidentally was asked the very same question during a recent Webmaster Central Office-hours Hangout session (see approximately 37:48 in the video below). Specifically, he was asked, "Does it make sense to implement AMP pages on non-publisher sites?" Indeed, Mueller's initial response was what you may have thought it to be, that only "newsy" content will appear in the carousel, and if your page doesn't fit this profile, well then AMP won't help you in this regard. It's what he said next that is truly intriguing: "You can make AMP pages that can be used normally." Mr. Mueller then qualified this statement by subsequently referring to an AMP beta tester who optimized their desktop pages with AMP, "...the desktop version is actually an AMP page, which makes a site really really fast."

My key takeaway from this last statement....really...really...fast. While AMP may not serve as a ranking signal, it does make a page....really really fast, in an instant according to the AMP project (four times as fast according Romain Dillet over at TechCrunch). So while AMP may not be related to rank in a direct sort of way, it does potentially have an enormous user-experience impact. We know that Google weights page speed very highly when considering a page's rank on the SERP. Meaning, that on a more meta-level, AMP could become a ranking factor. What if your competitor has a page that loaded four times as fast as your own? How might Google rank your two pages comparatively? Just to more or less confirm this analysis, John Mueller Tweeted this link to a Financial Times Technology Department article and commented:


"there are clear and highly valued benefits in making the site even faster"https://t.co/cnueoR2c2Y

Ads:  Google aimed to address various issues AMP would present to mobile advertising and announced its intention to utilize AMP in order to "transform the ads experience on the mobile web." According to Nitin Kashyap & Craigh DiNatali over at AMPHTML, ads innovation has been outlined as follows:
GitHub has published additional technical information on AMP ads.

Social Media: As part of the Webmaster Hangout session's discussion on AMP, John Mueller said, "The other thing to keep in mind is that AMP is not just shown in Google results, so there are a number of other sites that are planning, or I don't know if they are already showing, AMP content in their services as well. So for example, I believe Twitter is going to start doing that, Pinterest was another one of those sites... So if you have content that's regularly reused in some of these other services, then that's something that could make sense there as well."

Couldn't have said it better myself.

Preconceived notions are of course often misleading. The moral to be taken from the ones held about AMP is that the project really spreads its roots beyond "newsy" content and snazzy carousels. In the mobile age, and in considering Google's mobile push, it may be beneficial to revamp your approach to how you think of AMP. It's safe to say that AMP is intended to be much more profound than some have initially taken it to be. Like any broad shift in web and search interaction, there are inherent SEO impacts. It's important to consider the full picture and take a holistic approach. While AMP is not a ranking signal as of yet, it does contain behemoth page speed and subsequently a walloping SEO punch.