Beyond Authorship: 5 Reasons Why Search Benefits from Content Attribution

On June 25th, Google announced that they would stop displaying the authorship photo in their search results. This news came as a strong deception for many authors and webmasters who implemented the signature on their articles. This decision gave rise to a lot of discussion and many articles were published regarding this change. Most of them have been dedicated to the reason why Google would have stopped the display, others were looking for alternatives and finally a few were discussing the CTR. However the following question remains: should webmasters keep investing time in the implementation of the authorship code or not? My answer is YES. To summarize this article briefly, here is why:

Google Authorship: How it Works and What it Does

In the early days of the web, people were only using data and metadata found within content to rank and search information. Then, in 1996, relations between pages (links) were added to the equation and gave birth to the famous Pagerank algorithm, created by Larry Page and Sergey Brin from Google, with the efficiency we all know.

In the past 10 years, the rise of social networks was really important. New signals could also have been added to the search equations (comments on articles, reviews on social sites, RT of Facebook Likes, etc.) but it could not be done by search engines in an independent way. Think of Twitter blocking Google access to its API, for instance. The firm from Mountain View can't rely on external signals to build ranking (even if we know more or less the way Google is indexing tweets). Therefore, to create an additional layer, Google had to build its own social network in the form of Google+. That created two opportunities for the search engine:

The first one is that the discussions made about articles are now accessible; the amount of information collected there is much more targeted than a regular link (sentiment analysis can be performed on posts, number of +1s, comments and shares can be tracked).

The second opportunity, which is to link content to its creator, seemed like a side effect; Google Authorship was born.

Technically speaking, the Google+ authorship system is creating a reciprocal link between a URL and an individual entity profile. Google filed the agent rank patent in 2005 for that, and Google+ was launched only in 2011. So, Google+ might be much more than a social network for Google Search.

G+ profiles contain a lot of information about individuals, but the most important feature is our social connections. By implementing the G+ authorship system, the new layer I was referring to earlier is created in a very smart way. The engine is not only connecting pages to their creators, no, it is connecting content to the social graph. The combination of the link graph and the social graph bring together a huge amount of information. To make a simple comparison, it is similar to going from 2 dimensions to 3 dimensions. 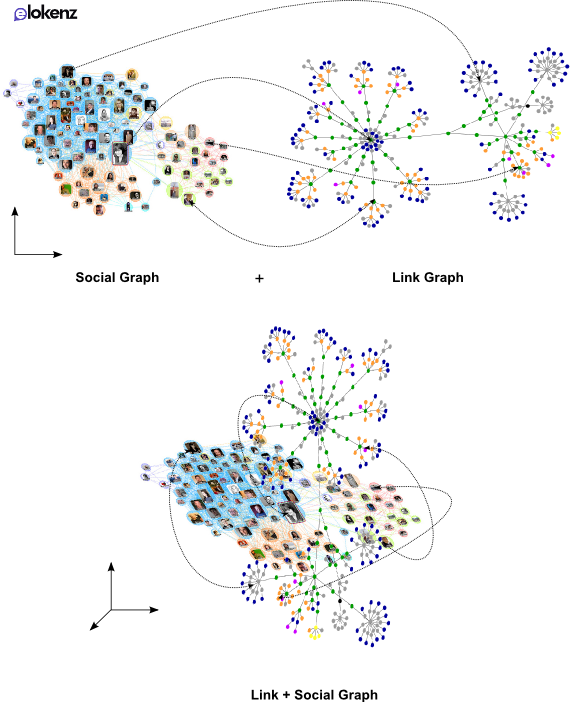 The connection between both spaces was relevant only if the social side was bringing enough information. Therefore, Google invested a lot into building and increasing the adoption to its social network. To my knowledge, every Google service now needs a G+ account: Gmail and G+ are more or less the same thing, YouTube is strongly interacting with G+, your calendar is linked to G+, your android apps are visible on G+, etc.

The creation of an authorship photo snippet was part of this strategy. Google argued that this snippet would likely increase the click-through rate (CTR) on search results. Most webmasters are willing to do many things to increase their CTR and therefore the technical manipulation to set up authorship for content was performed by most content creators. This increase of CTR when a photo was being displayed has been contested by very few people, but mostly by respected experts. In the last couple of days, Mark Traphagen (someone once described him as a "G+ guru") published a post on Moz about that, and his point of view is very clear:

"All that is not to say there was never any rise in CTR for any Authorship posts. But it is to say that we never really knew for sure, and we never knew how much. Most importantly, there was never any proof that any CTR boost was universal. That is, there was no reason to assume that just because your results got an author photo, they were automatically getting a CTR boost. "

So, while the appearance of the authorship photo was obvious, its removal was not. I will not list the various ideas that have already been suggested, but the most widely adopted theory seems to be that Google was losing money with it.

The photo in the search results could distract visitors from clicking on ads. Though I like this theory a lot, I think it's not explaining everything. Google could also have reduced the amount of results with a picture instead of completely removing it. By the way, the display probability of this author photo has been subject to a lot of tuning from Google in the last months so I will not be surprised if Google reactivated the feature in a near future.

Should you keep implementing the authorship tag or not?

I believe users should keep adding their authorship to articles when it is relevant (mainly on blog posts, on content which carries informational value). This for five reasons:

Authorship Photos Might Be Turned Back On One Day

The first obvious reason comes from my last section. Google might turn on again the display of authorship photos, so it's always great to be prepared and to have the tag on your website. The day it will happen, you won't have to set it up again on all your sites.

The Byline Increases the CTR Too

The second thing is that, even without the photo, the authorship byline that is appearing below the URL in a search result is still a factor to help your CTR. Let's decompose a result as it is today for the query "SEO tips for Joomla". 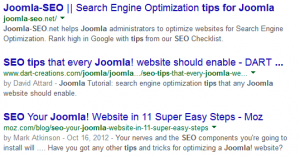 First you'll see a title in bold and blue, then a URL in green, and finally, before the description, you might find extra information in grey. One important thing is that this template is universal and is the same on your mobile or on your tablet (if you find a different display let me know in the comments). See what I got for the same query on my iPhone: 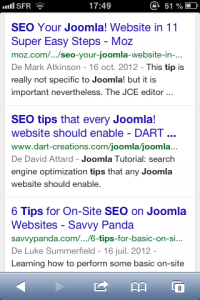 So even if the label is not the first thing you notice, searchers will learn how to use it because of this universality. The byline will bring extra value to your page in the SERPs. For a concrete example, let's compare a result to a book. You can often find books with and without author names on their side, but your mind will tend to give more credibility to those where you can find author information.

The third point, called author rank, was discussed by many people until recently, and it tends to be more and more accepted. As I described it in my first section, the implementation of an authorship system allowed Google to reach a new dimension in terms of ranking signal. By combining links, social discussions, the social graph and authors, Google entered into a new playground. A strict definition of 'author rank' as the one you know for 'Page Rank' is impossible at this point. Even a comparison between the two is irrelevant. The mathematical definition of Pagerank is 'the probability that a random surfer visits this page'. A content creator is likely to be read only in a given context (topic, epoch, language, community). Therefore, the academic literature about an author rank computation is quite diverse and no consensus seems yet to be adopted. However, simple signals can already be collected and are likely to be used for ranking. I am not entering into details since Mark's post is talking about that in his #5. In brief, be ready, an author rank calculation is coming.

The authorship signature is openly accessible to external services. I am not aware of many services except my own project Elokenz and the (still active?) Authorrank.org at the moment, but there might be other very interesting applications in the future. The data Google is providing is very sparse at the moment, and you can only get the list of domains where authors are contributing, and then it's up to you to check whether a given page was marked or not. I wish G+ would provide an API in the future where you could collect the list of articles for a given author. In the meantime, people have to implement it to build their own tool (at Elokenz we have a private API for that).

Believe it or not, the web is becoming more and more semantic. David Amerland, another Guru (but this time for semantic search), is frequently providing examples of the progress search engines are making. Semantic information can be created by content (what you are writing is carrying a semantic information and natural language process) or by context (your code, your meta data, incoming links). A reference to the author of content (an article, a blog post, a forum thread) is a valuable piece of information. I believe that it will soon be easy to search for "articles about SEO from Jean-Christophe Lavocat in English” on Google. So, keeping the authorship information (when it's relevant) could be a great thing when Hummingbird 2 or 3 will be released.

I understand that my post is clearly oriented toward the keep using the authorship system opinion, and that it's clearly what Google is expecting from us. However, I really think that this meta information can bring a lot to search and to the interaction between individuals and content. At Elokenz we think that by providing a direct connection between authored posts and the people who talk about them on social networks, we can help strengthen the two layers together: the links and the social graph. In one way, even if we stop using the authorship tagging, Google might still be able to retrieve some information with language processing, however, it might be subject to errors. So, why not help the bots and add the correct author information?

Jean-Christophe Lavocat
Follow @MordyOberstein
Jean-Christophe is the founder of Elokenz, a tool for Bloggers, Web journalists, Community Managers, Content Marketers and Growth Hackers. Elokenz allows users to follow the social mentions of their articles to increase their visibility and engage with more readers. Elokenz is fully based on the G+ authorship.