Are Featured Snippets Getting Shorter? [Study]


It's always nice when theory meets reality. Not too long before I undertook the research for this study I wrote an article about why I thought Featured Snippets would be getting shorter. To be honest, I was not expecting my search marketing prophecy to come true so soon. However, when I noticed that Google was throwing content barely a few hours old into Featured Snippets it seemed the content within them was a bit on the thin side. Thus, I took to analyzing 150 Featured Snippets to see if my anecdotal observation was correct. 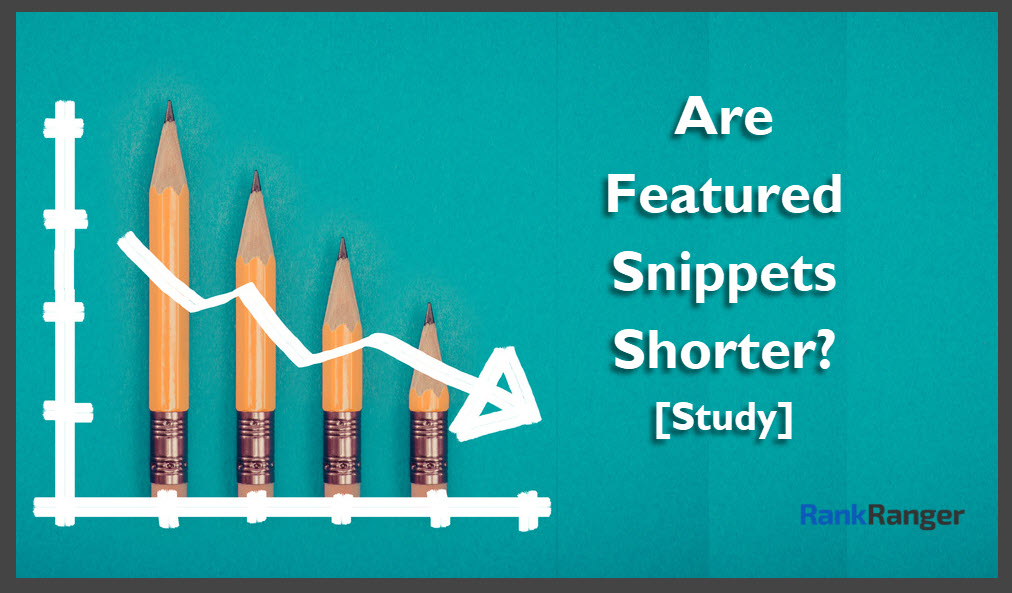 On the Average Length of Featured Snippets: Then & Now

It should be noted, that I only compared Featured Snippets of the same format. That is, if a Featured Snippet was presented in paragraph form in say 2017 but currently appears as a list Featured Snippet, I did not use it for this study. The reason for this is obvious, Google tends to use different character allotments for each type of SERP feature.

Lastly, I analyzed paragraph and list Featured Snippet formats only. I did not look at any tabular Featured Snippets as it was generally too cumbersome to count the characters within them.

That said, would you like to see what I found?


How Long Are Featured Snippets These Days? 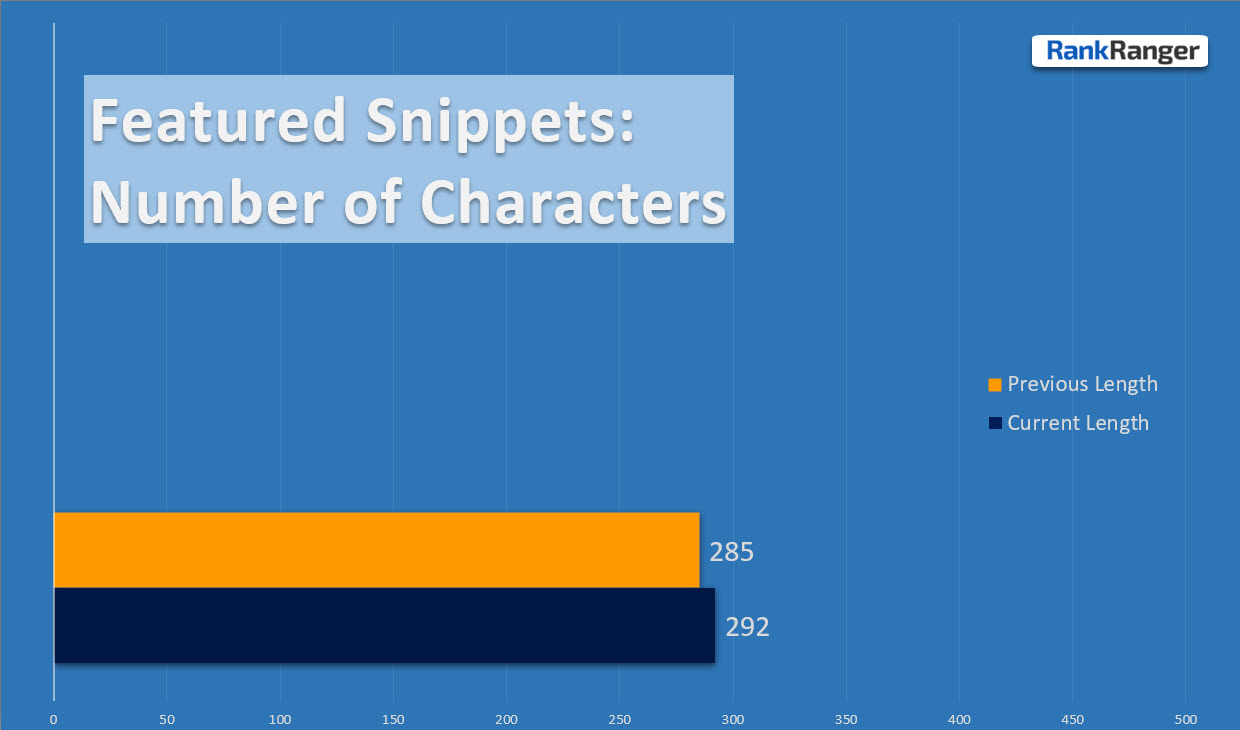 On average, and regardless of format, Featured Snippets now contain seven more characters than previously

Featured Snippets that contain a list (either as bullets or a numbered list) are about 9% longer in 2019 than they were prior to the end of Q3 in 2018. Specifically, the average list Featured Snippet now contains 315 characters whereas the format used to consist of 289 characters. 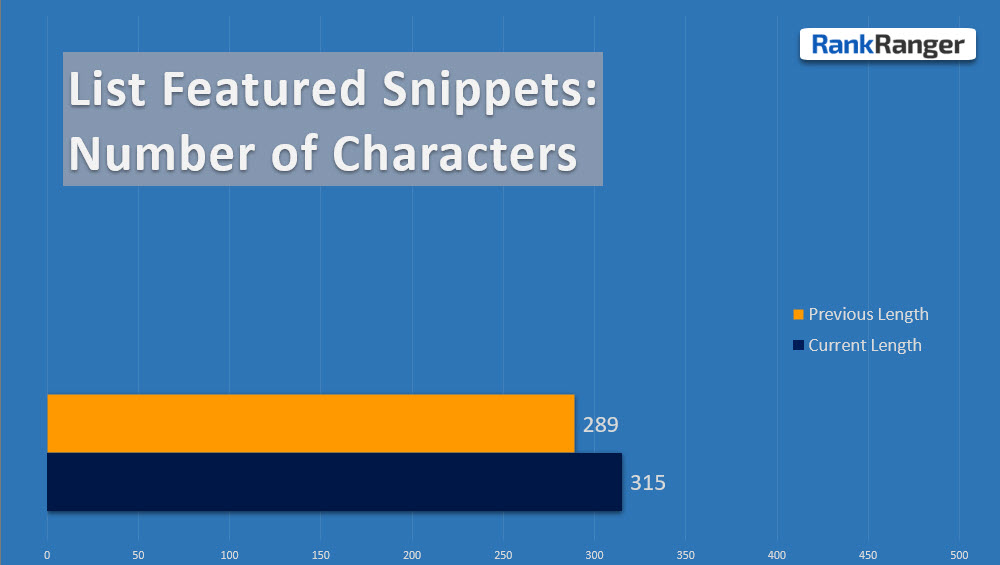 Here's a Featured Snippet for the keyword top online shopping sites from January 2018: 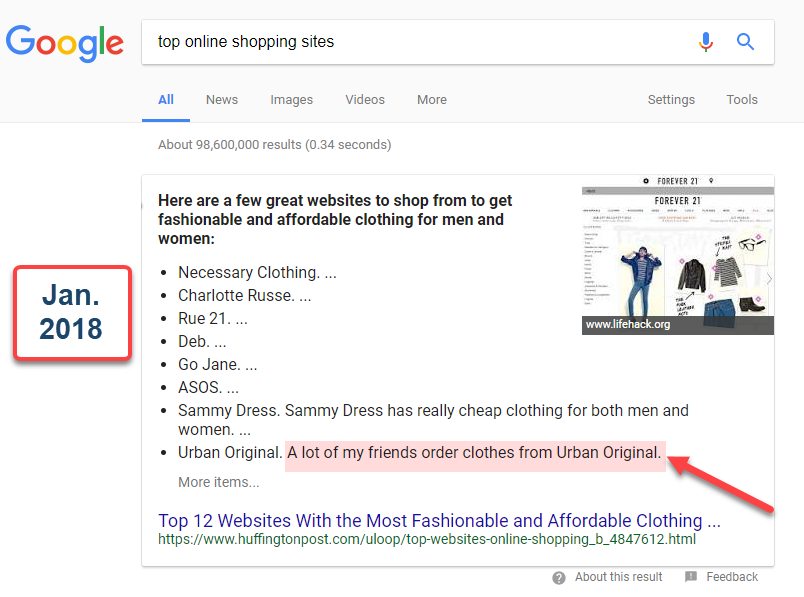 There is no reason I need to know that the author's friends order clothing from Urban Original. I really don't care. Hence the 2019 version of this Featured Snippet has no such content: 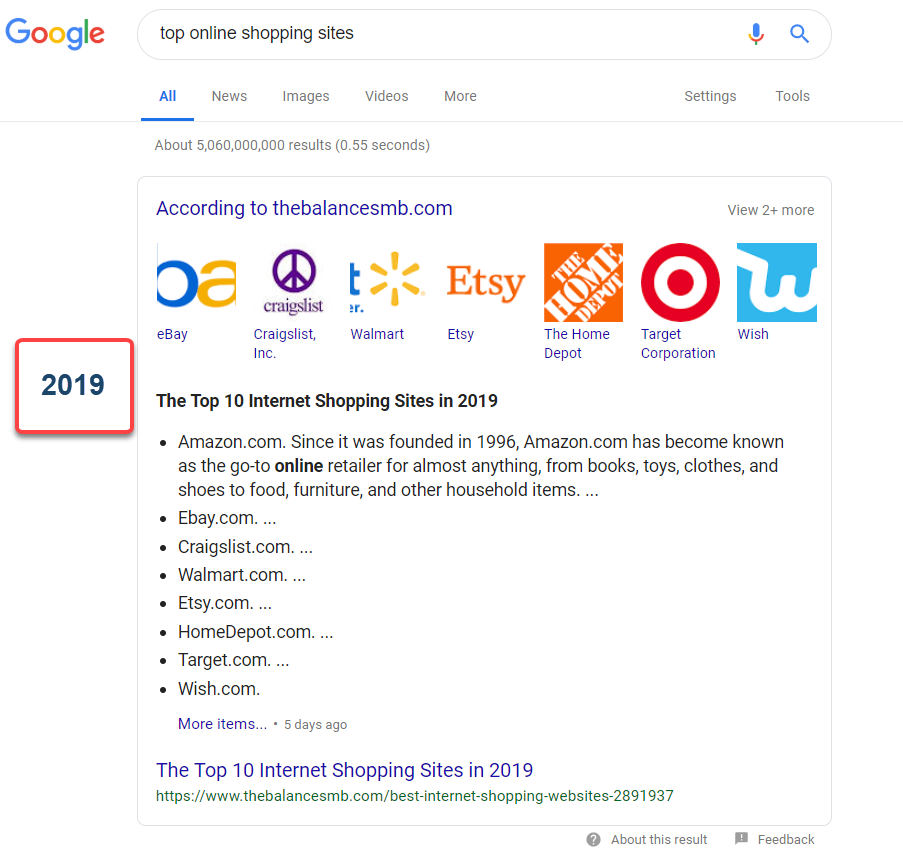 Aside from a short description of Amazon (which is not entirely irrelevant), all we get is a nice list of online stores. Notice, the stores listed in 2019 are far less obscure than what was shown previously. Also, the title/header leading off the list in 2019 is far more succinct than what was shown in early 2018. Which is interesting because the 2019 Featured Snippet is 26 characters longer than the older version. 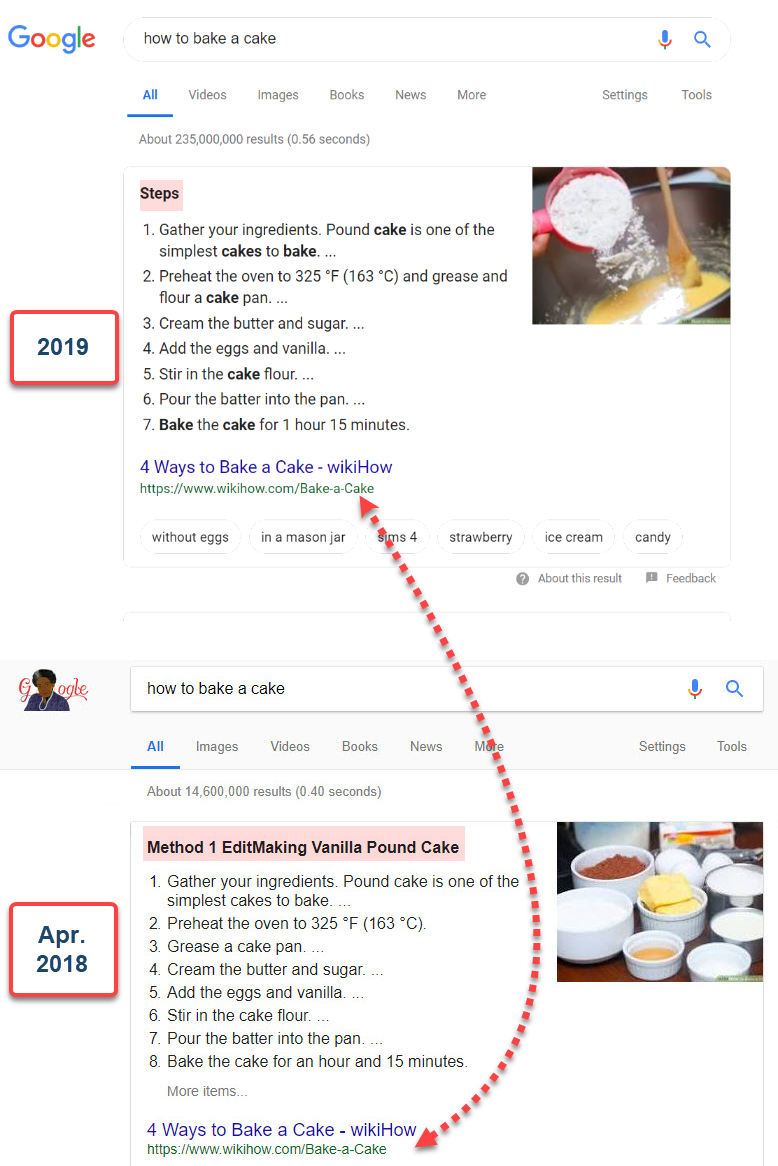 Despite the same URL showing both inside the April 2018 and 2019 version of the Featured Snippet, the more recent incarnation is 38 characters shorter


What happened to make the current snippet shorter? The header leading the list. If you'll look above, Google did away with the inefficient and a bit bizarre heading of Method 1 EditMaking Vanilla Cake for the far more comprehensible Steps!

[Note, Google also did away with the 'More items' button, thereby indicating that the list shown is the complete list and that there is less of a need for a click.]

It's pretty clear that while Google has increased the character count within list Featured Snippets it has done so in spite of presenting more efficient content within them.

There's a general trend towards Google offering a more complete information experience on the SERP. This takes the form of both more types of "Google" content as well as more complete answers within Google's SERP features. For list versions of Featured Snippets, this means more content. (In a moment I'll show you why this does not apply to all Featured Snippet formats). If Google wants a list Featured Snippet to serve as a comprehensive answer it may mean adding more content. (Interestingly, the average number of bullets/numbers within a given list Featured Snippet has not changed and stands at 6.6 both now and prior to the end of 2018's third quarter.) 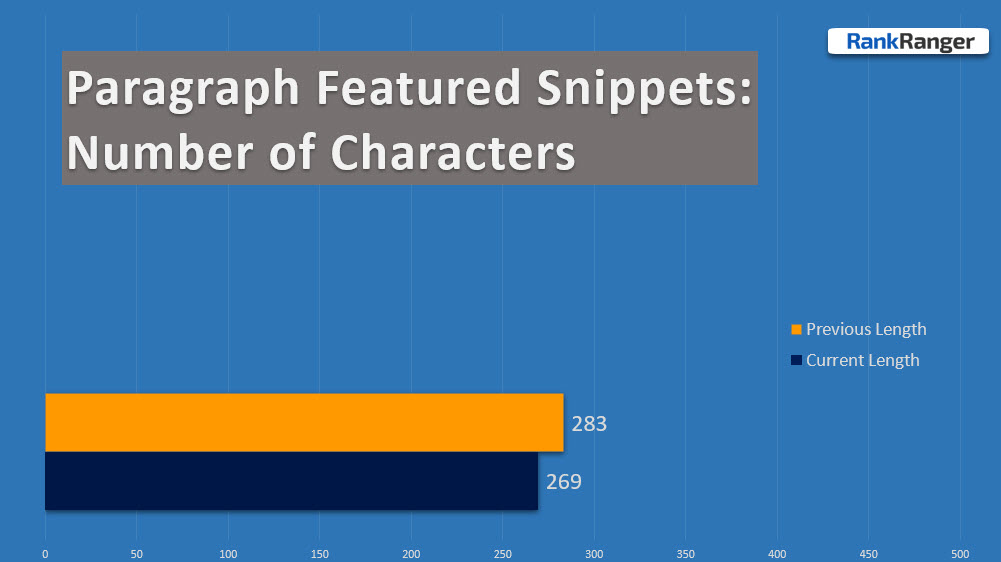 Google has been shortening the length of paragraph format Featured Snippets


14 characters might not sound like a lot. In truth, from what I can gather, that comes out to about three fewer words being used within a paragraph Featured Snippet. That's not an exorbitant reduction, though it still is something to note and consider. However, you have to keep in mind that this is the average. The number of fewer characters is important (and is significant despite boiling down to three or so fewer words) but the trend itself is of equal importance. That is, we have to ask what fewer Featured Snippet characters means qualitatively.

To help us understand just that here's what a Featured Snippet looks like with 101 fewer characters: 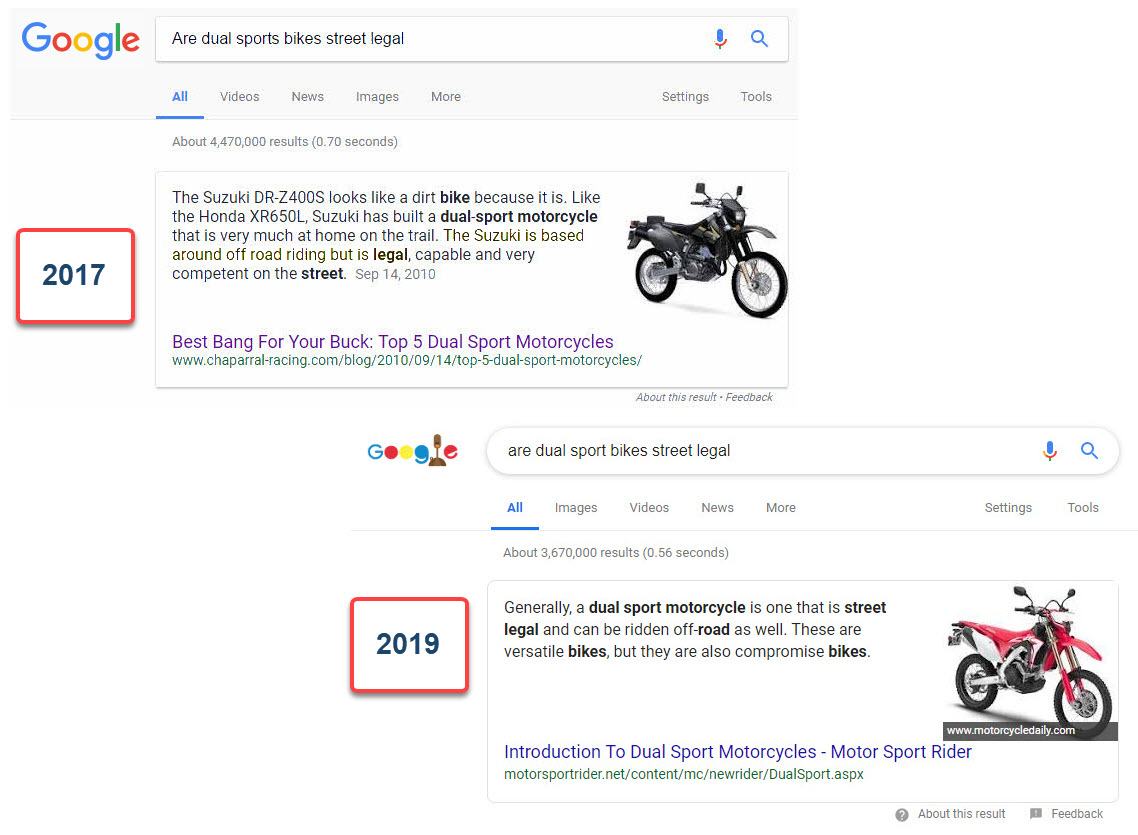 First off, the original Featured Snippet from 2017 was not exactly War and Peace, it was pretty concise to begin with and even stands well under the current and reduced average of 269 characters. This already slim incarnation now looks almost bareboned and doesn't even run more than three paltry lines. As you all well know, the shorter the content, the more likely it will be read.

Now, are you ready for why the character reduction here really matters?!

I'd like to ask you to go back and read the Featured Snippet from 2017 if you haven't already because it hardly answers the question that is the query. It's only in passing that we learn that a dual sports bike is street legal and even so we can only infer that this specific model is street legal.

Compare that to the 2019 version where we are told explicitly that dual sports motorcycles are generally street legal. The character reduction was carried out not because Google thinks shorter content is more readable content. Rather, Google is reducing the number of characters in paragraph Featured Snippets because it is better at dispensing information that directly aligns to the query. Shorter here means a more targeted and more complete answer.

That becomes clear when we actually compare the current Featured Snippet (at the time of this writing) to the previous version for the keyword universe origins: 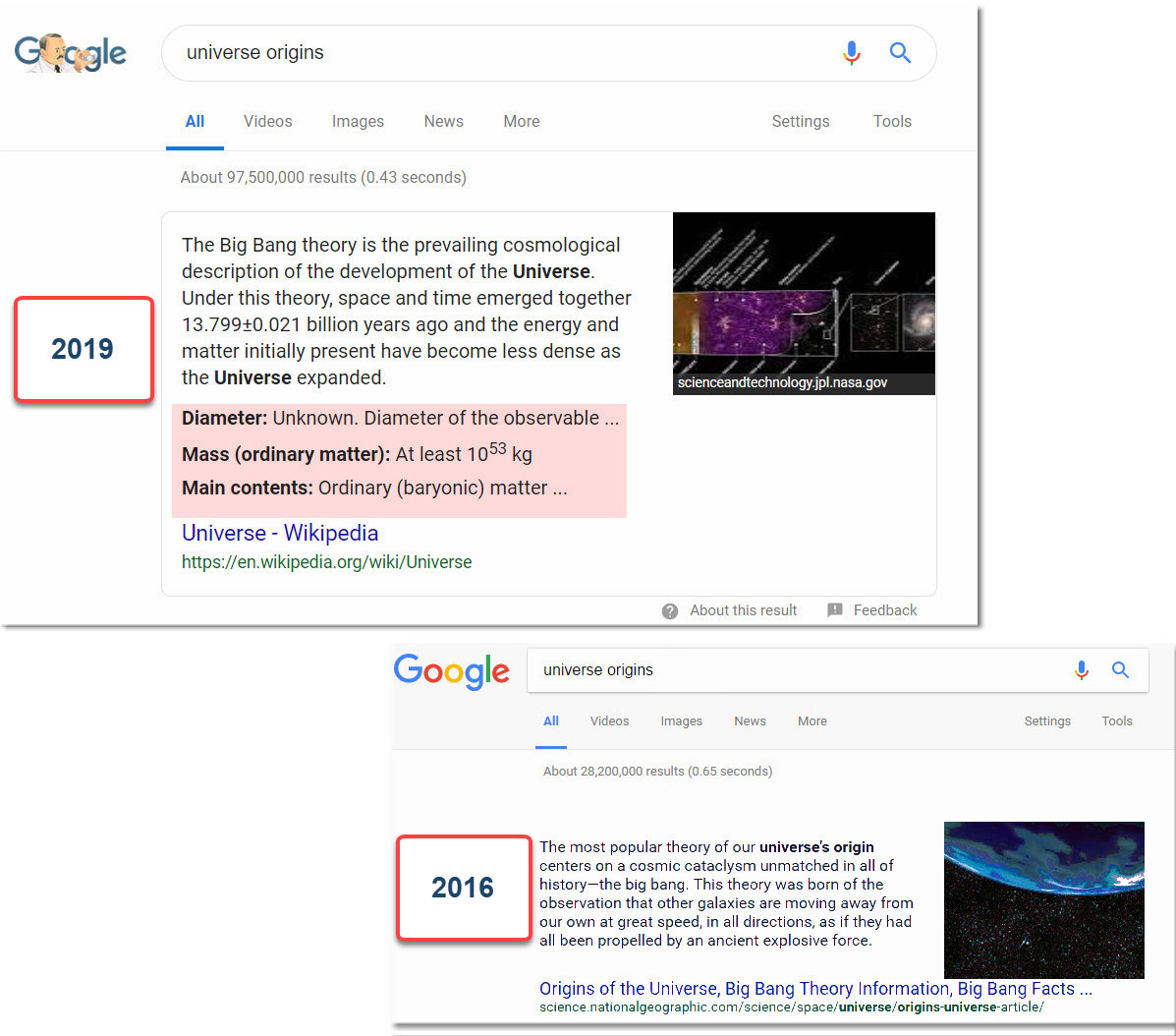 The 2019 version of the Featured Snippet contains ancillary information to better anticipate the user's next quest, knowledge of the universe's size. In this case, and as is 'most curious', Google not only pulled content from the main body of the page but from a side box as well so as to offer a more layered answer with content that one would expect to see in a Direct Answer.

All of this, of course, and as I laid out in my Search Engine Land article on the future of Featured Snippets, means that users may be less inclined to click on a paragraph Featured Snippet's URL. (I would say the same for the list format as well, but because it has more, not shorter content. That is, the definition of a potent and complete answer is not related to its concise nature, at least where list-type Featured Snippets are concerned.)


Father Time and the Fading of Featured Snippets 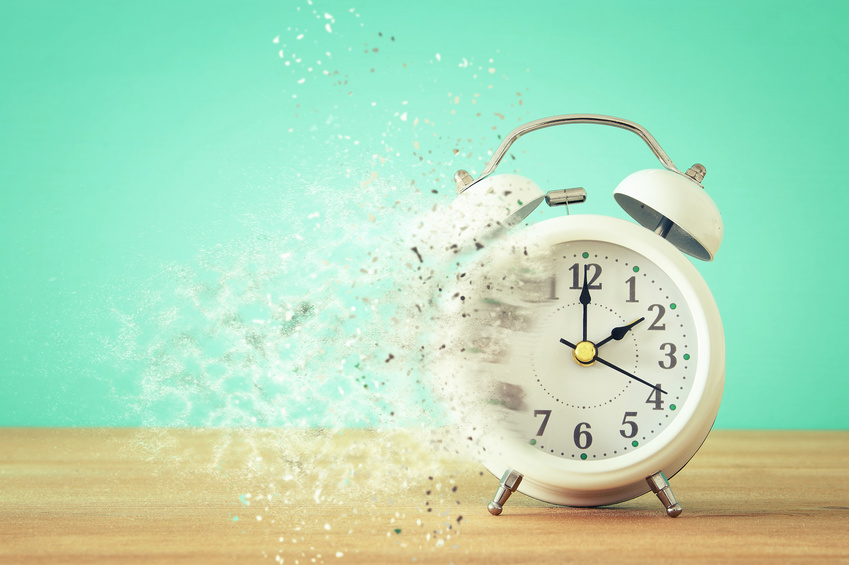 That said, and as I've mentioned elsewhere, Featured Snippets will always be a win. More than that, having your URL placed in front of a user's eyes in such an authoritative manner (as comes with being at the tippy top of the SERP) is a big brand win! Perhaps with paragraph Featured Snippets coming in at a paltry 269 characters, people will start to talk up the branding advantages of the zero-position box. Perhaps.