Google Update March 2019 (Who & What Was Impacted)


The first official Google algorithm update of 2019 has arrived! With it, of course, comes much speculation over its enormity as well as what niches and sites were the most impacted. Throw the Medic Update into the mix and we have ourselves quite a bag of potential SEO tinder on our hands here.

However, just how big was this update compared to the Medic Update? Were YMYL sites targeted? Were certain niches more affected than others? Was the March update some sort of reversal? Once the dust settled who were the big winners and losers?

Let's have at it then, shall we? 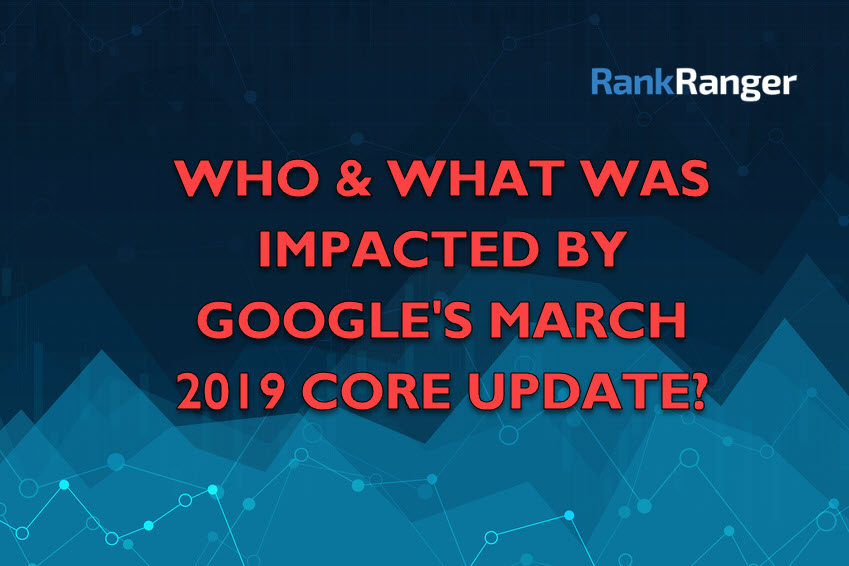 The Medic Update was one of the most cataclysmic algorithmic events to hit the SERP for quite some time and it's important to remember that. Much of the worry and intrigue surrounding the March 2019 Core Update gains its context from what occurred in August of 2018. I, therefore, want to specifically deal with the latest core update relative to the Medic Update. In the process of doing so we'll be able to get a better sense of how "large" the March 2019 Core Update actually was and if any niches were targeted relative to others. Of course, in doing this I'll also show you how the niches fared.


The Overall Size of the March 2019 Core Update

Ironically, being that most updates go unconfirmed, the one official update we've had thus far in 2019 was not anything extraordinary, at least not in terms of the length of its roll-out and overall fluctuation levels.

The March 2019 Core Update only lasted four days and produced a rank fluctuation high of 89/100 on the Rank Risk Index:

By contrast, the unconfirmed algorithm update that took place at the end of February hit a fluctuation level of 91/100 at its peak:

To be fair, the Medic Update of August 2018 also ran its course over but four days. Here, however, rank fluctuation levels hit 94/100:

Perhaps, though, the best comparison is to the first of the confirmed core updates, which coincidentally took place exactly a year before the March 2019 Core Update. Back in March of 2018, the core update was a massive 14-day algorithmic event that had fluctuation levels hitting 99/100! What a difference a year makes!

The point is, the most recent core update incarnation is hardly distinguishable from the average (substantial) run of the mill Google update. It is certainly, again from an overall fluctuation level perspective, not on par with the Medic Update.


The Impact of the March 2019 Core Update by Niche

To analyze the impact of the update on rank stability I analyzed the SERP according to six metrics:

For our purposes, I analyzed two dates where normal levels of rank fluctuations were observed. I then recorded the percentage of "exact matches" for the six metrics listed above. This data served as my baseline.

After collecting my baseline data, I executed the same process. However, this time the two dates I compared were not days where normal fluctuations were observed. Rather, rankings on a day noted to be stable were compared to rankings tracked during the core update. As a result, I was able to see, by comparing the baseline data to that seen during the update, if the percentage of ranking matches was altered by the algorithm change, and if so to what extent. A lower percentage of exact matches would clearly indicate an increase in rank movement.

For our purposes here, the following niches were analyzed:

There was a fair amount of consistency within the volatility displayed by travel sites. As shown below, even the top ranking position underwent a fair amount of rank changes (relatively speaking). 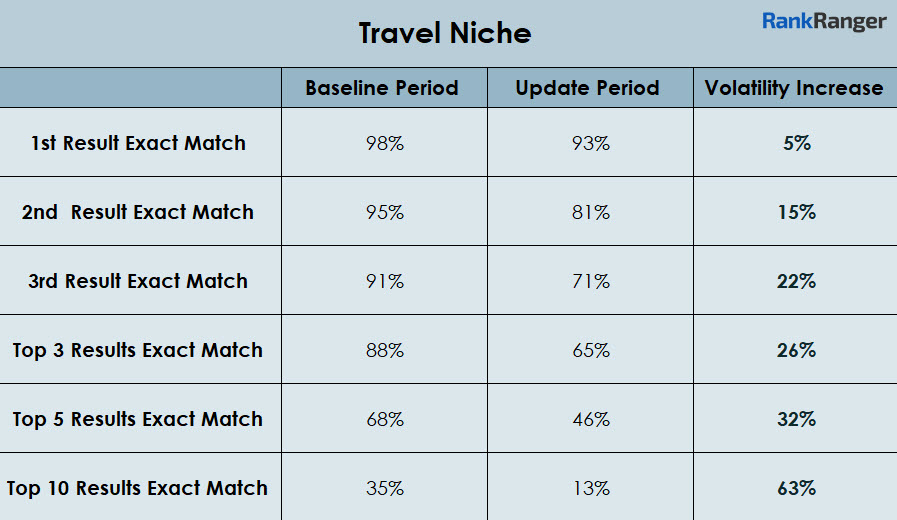 Of course, as is clearly shown, as is expected, and as will be seen in the other niches, as you move down the SERP rank instability increases. Here, the instability reaches a pinnacle when analyzing the percentage of SERPs where the top 10 results all matched from one point to the next during the baseline and update periods. In this instance, the baseline period showed that 35% of the dataset's keywords producing exact match SERPs while the same occurred just 13% of the time during the update period, a 63% increase in volatility.

The data seen within the Home & Garden/Retail niche was similar to that shown above for the Travel industry. While in this case, the top result on the SERP saw more volatility than that exhibited within the Travel niche, the other metrics were very closely aligned. To the exclusion of the Top 5 Results Exact Match metric, all of the volatility increases shown as part of the Home & Garden/Retail niche were within five percentage points of the Travel niche. 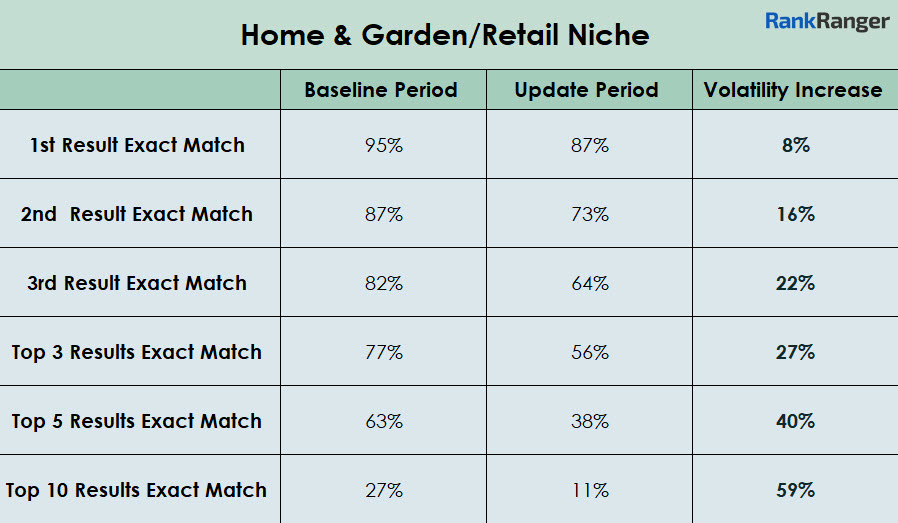 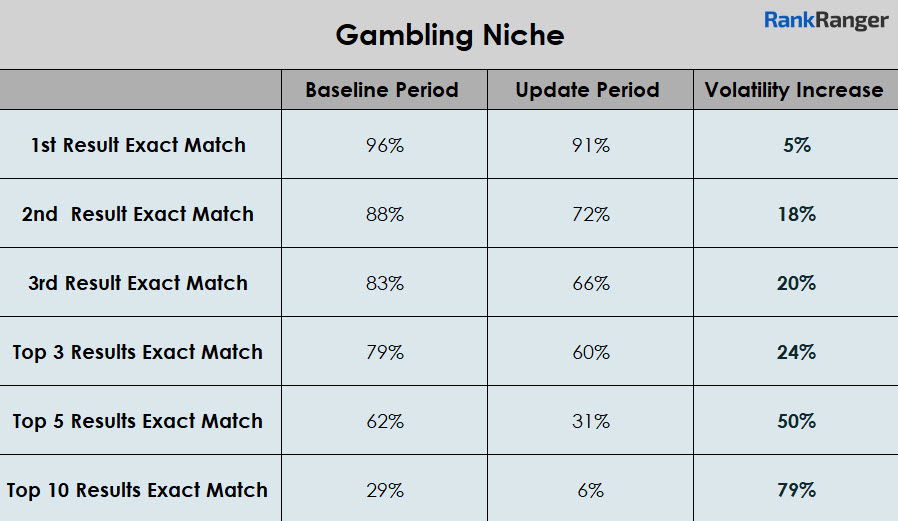 The bottom line, when looking at the top 5 and top 10 results, the Gambling niche was considerably more volatile than the two niches shown earlier.

For some reason, the issue of YMYL sites during the Medic Update has been viewed within a zero-sum framework, one with hardly any nuance. Interestingly enough, most of this discussion has not come from those producing the actual data. Neither extreme, in my estimation, is at all correct. The Finance and Health niches clearly displayed a greater tendency towards high levels of rank volatility. This, however, does not necessitate the conclusion that YMYL sites were targeted. Rather, what is far more likely is that the changes Google made to the algorithm were more "applicable" to such sites, thus, any drawbacks these sites displayed were all the more accentuated (relative to their peers within other niches).

With that, there is an obvious intrigue in knowing if the March 2019 Core Update adhered to the same construct.

Based on the data collected, and unlike the Medic Update, there appears to be no divergence between YMYL type niches and any other industry. The data for the Finance and Health niche either shows it to be consistent with the level of volatility seen within the other niches or in some instances, a bit less volatile.

The Health niche showed the lowest levels of rank volatility at both the first, second, and third ranking positions when compared to all the other niches I analyzed. Even when looking at the Top 5 Exact Match metric, the Health niche only saw a 25% increase in volatility during the update whereas the Travel niche came in at a 33% increase for the same metric. When looking at the first page of the SERP overall, i.e., the top 10 results, the Health niche, which saw a 71% increase in rank volatility was in the same ballpark as the Travel and Gambling niches, which saw a 65% and 79% spike in volatility respectively. 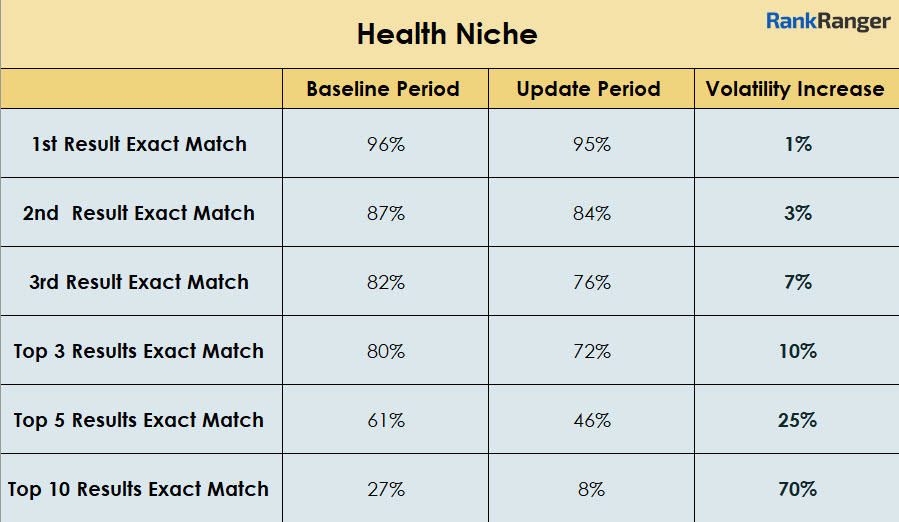 In contradistinction to the Health niche, rank volatility within the Finance industry was more apparent towards the top of the SERP with the 1st and 2nd Exact Match metrics reflecting a 9% and 26% increase respectively. These figures are a bit higher than what was observed within most of the other niches. That said, the Home & Garden/Retail niche displayed the same rank volatility increase at the first position. 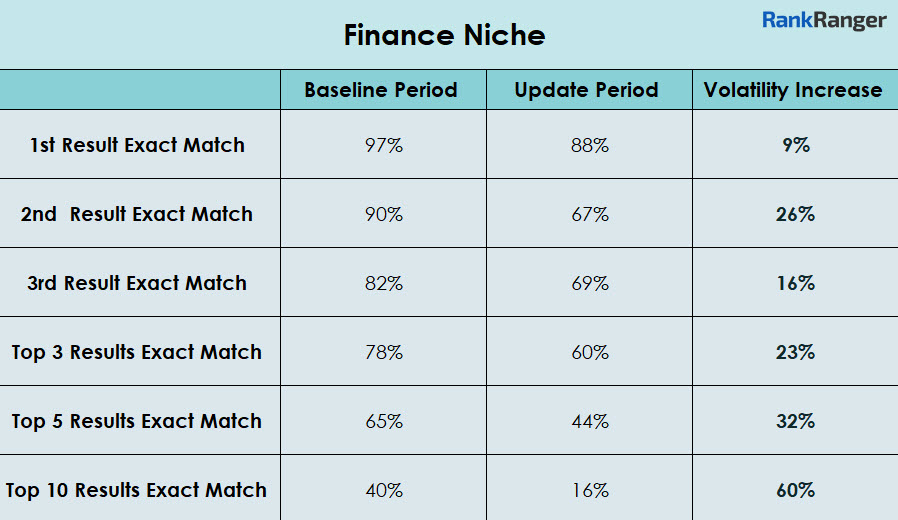 Despite some divergence at the very top of the SERP, the remaining volatility metrics placed the Finance niche within the same "stability departure" standard set by the other niches.

How the March 2019 Core Update Compares to the Medic Update

Here's the data for the niches mentioned above which, of course, includes data on Health and Finance sites:

Simply put, the increases in rank volatility seen during the Medic Update were far steeper than what was recorded during the March 2019 Core Update.


Winners and Losers of the March 2019 Core Update

Identifying the sites that were more greatly impacted by the Medic Update was pretty easy all things considered since so much movement was recorded. The same sort of prodigious movement among a single site's visibility was not as apparent with this update. Still, there were some big "winners" as well as some big "losers."

Before I showcase the lists of winners and losers, let me briefly explain what you're looking at here. The sites listed below are sites that underwent either sharp visibility increases or visibility decreases as a result of the March 2019 Core Update.

In doing as such, you can see the site's true gains or losses over the entire period of increased rank fluctuation activity, not just the March 2019 Core Update. What I wanted to avoid was showing you a site that displayed a huge uptick in visibility as a result of the core update but that was simply a return to normal levels as the site was hit hard towards the end of February by another unconfirmed update.

Below is an example of such a site: 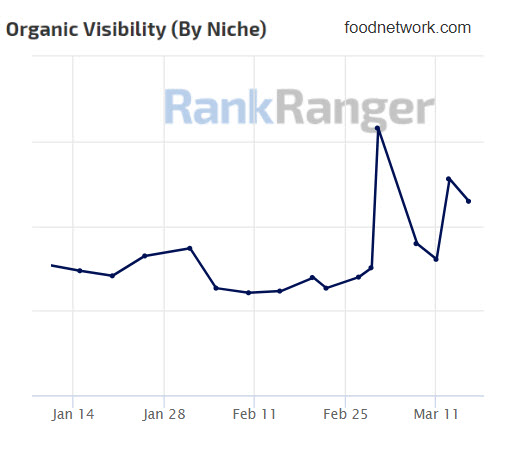 Caveats aside, here are the overall winners and losers of the March 2019 Core Update: 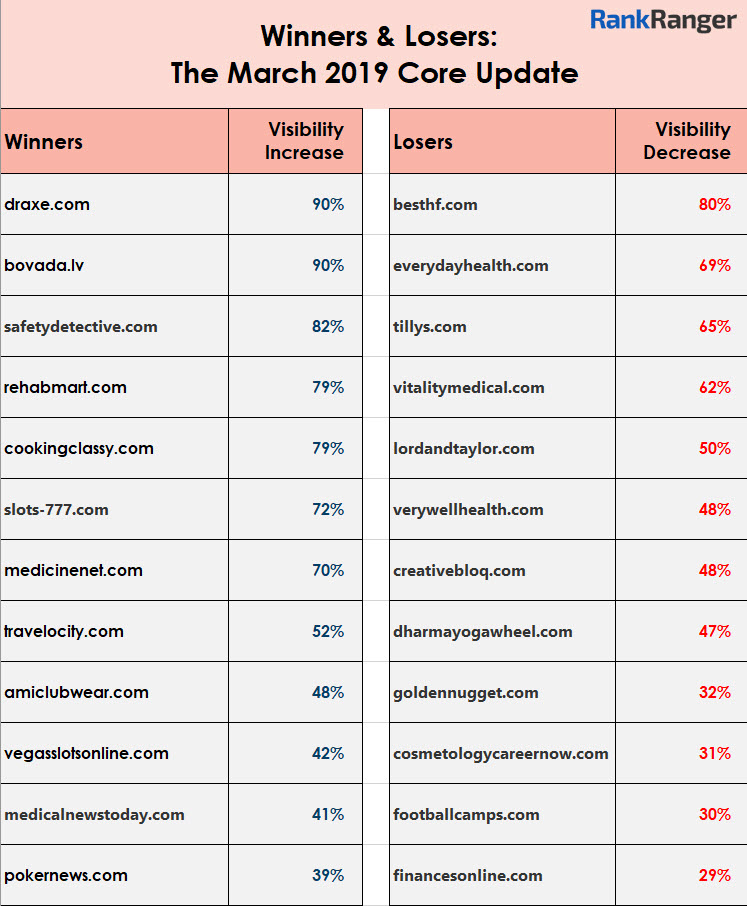 Note, just because a site is listed above does not indicate that it was not impacted at all by the algorithm updates that dominated late February and early March. As you can see below for the site rehabmart.com, the site was affected by the update that occurred on March 2nd. That said, the gains saw as a result of the March 2019 Core Update were true gains and not a mere reversal. 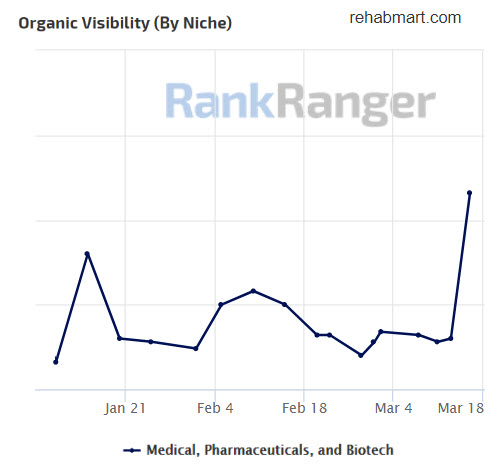 As an aside, you may have noticed that some of the sites on the above list were heavily impacted by the Medic Update. Indeed, sites like draxe.com and medicalnewstoday.com have seen a reversal of their ranking fortunes. That said, I don't see enough evidence, either in the sites per se or at the niche level to consider the March 2019 Core Update to be a reversal of the Medic Update. 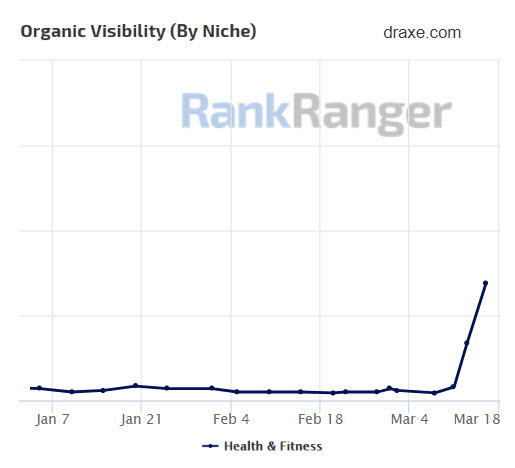 What is interesting to note is that the March 2019 Core Update hit the SERP exactly a year after the core update that was confirmed in March 2018. Does this signify a new algorithmic pattern where core updates are scheduled if not built into "the system?" That's a good question and one that will be easily answered by the time August 2019 rolls around!