Google for Jobs Is a Job Listing Powerhouse! 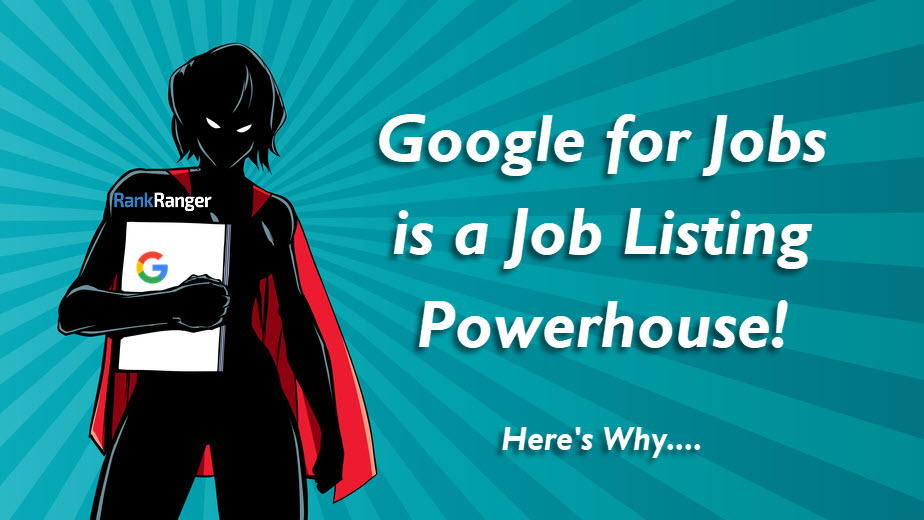 Google's job listing search engine, Google for Jobs, has been around for a nice while at this point. Though, despite having spread to markets such as India and Japan, not much is known about how vast of a resource Google's job compilation database is. For job sites such as CareerBuilder, how big a traffic determent is Google's job SERP feature? For job seekers, how deep does this canyon of job listings go? Is the job depository growing or is it stagnant? Simply, what is the state of Google for Jobs?

Care to find out?

What I would like to do initially is to take stock of how large Google for Jobs is: How diverse is the set of employers found within it? (i.e., Are a few major companies the dominant job listing force?) How many job boards does this aggregation of job postings actually represent? What sort of salary can one expect to see within the listings? Etc.

To get this train rolling, I'm going to use Rank Ranger's Job Insights Tool to pull some numbers (some of which were a bit surprising to me).

How Many Job Postings Are Found on Google For Jobs?

Let's start with how many listings can be found within Google for Jobs in the US. On average, we're talking between 175K to a bit over 200K unique job listings being available for job hunters on any given day. 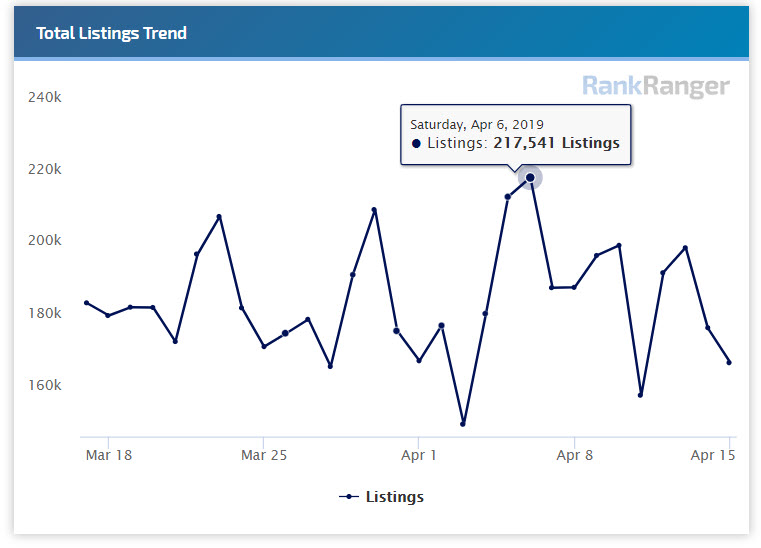 
I want to help you qualify that number a bit. Let's lowball this figure and say that each day there are 175K unique jobs listed within Google for Jobs. That comes out to 5,250,000 jobs per month.... LinkedIn says that 3,000,000 jobs get added to their database each month. That means that Google for Jobs contains double the number of monthly job listings as compared to LinkedIn. However powerful you thought LinkedIn's job database is, Google's is double that! And that's just the US!

How Many Employers & Job Boards Are Represented within Google for Jobs

There is definitely a nice diverse set of employers offering jobs within Google's job listing search engine. To again use ranges, there are generally between 32K - 43K unique employers represented by the job listings within Google for Jobs.

This means, that on any given day the average employer hosts between 4.5 and 5.5. jobs within Google for Jobs. Considering that both multinational companies, as well as local businesses, are represented, that to me seems like a diverse spattering of employers. 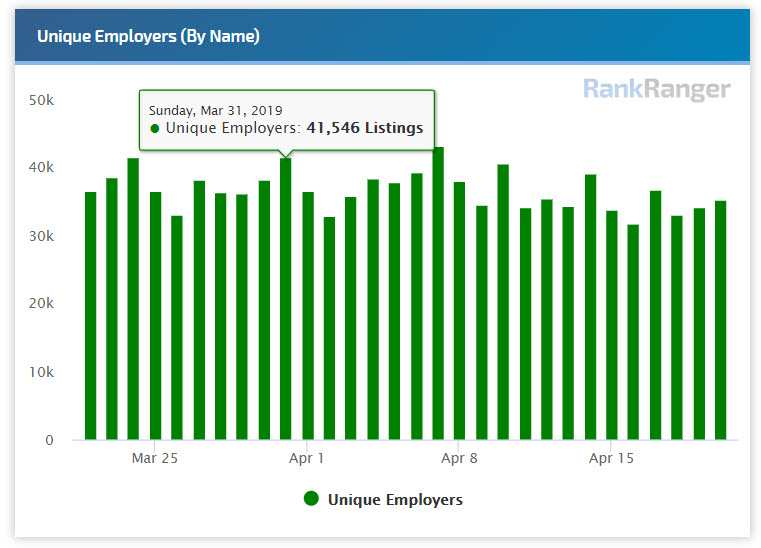 The number of unique employers listing jobs within Google's database hit a 30-day high of 41,500


Now, this one shocked me. There are between roughly 5,500 and 7,000 job boards represented within Google for Jobs on a daily basis. That's a ton! How many job boards can you think of off the top of your head? Maybe half a dozen? Nowhere near the low-end of 5,500! That's because Google pulls in job listings from in-house job boards. In other words, if apple.com has its own page full of job listings, Google considers that to be a job board. Google is not just pulling jobs from Glassdoor or Monster, but from the job boards of individual recruiters and employers! 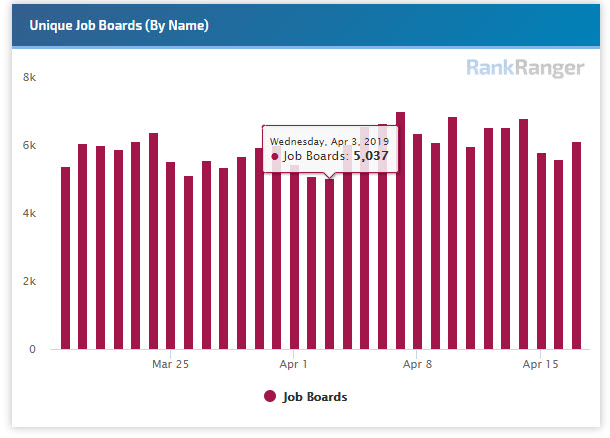 
Salaries Inside Google for Jobs

This is some of the most surprising data, in my opinion. The salary range with the most Google for Jobs listings was the $70K - $100K range which contained roughly 41K listings over a 30-day period. Next up was the $100K - $200K range with 37K listings! The next most heavily populated range is the $50K - $60K range with just 20K listings, about half of the number within the $70K-100K range. 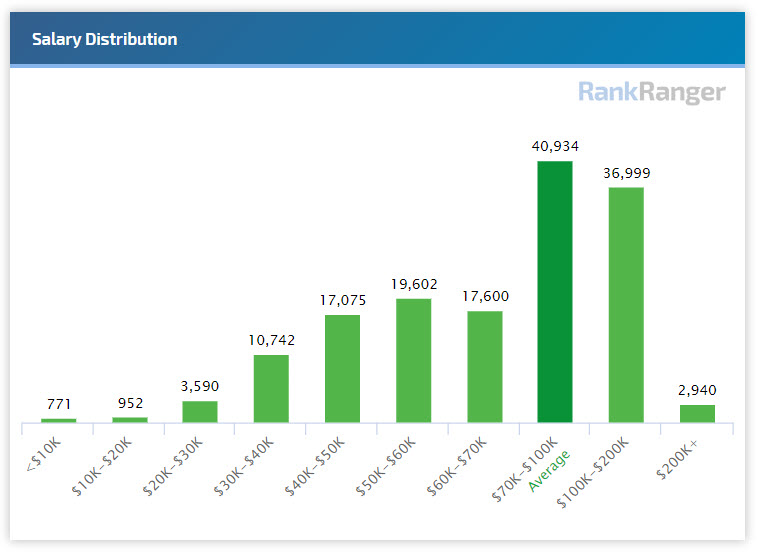 Oddly enough, most of the salaries within Google for Jobs fall between $70K and $100K

It's a little surprising then to see that the top two salary ranges for the reporting period inside of Google for Jobs were the $70K - $100K and $100K - $200K ranges. It's certainly not the case that the income data we're all familiar with is wrong. Rather, the likely possibility is that listings that offer a more generous salary are more likely to include salary info. (If a job post does not include salary information, it cannot be counted towards the average, obviously.)

When looking at the job categories that reflect the salary data (here, though the salary numbers are historical, not over a 30-day period), it's not surprising that to see executive jobs offering the largest salaries. 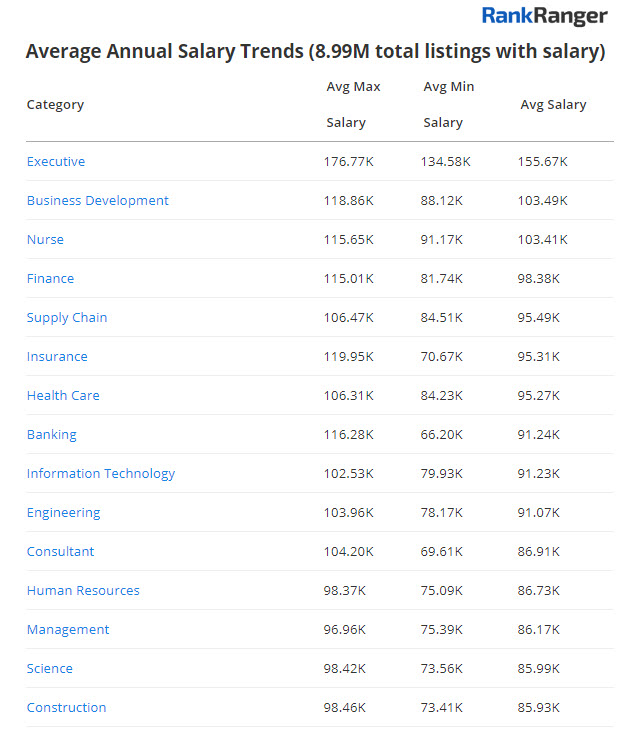 Conversely, some of the other categories, such as Nurse did catch me off guard. With a wife who is a nurse, it was a bit surprising to see that the average listing for nurses within Google for Jobs offered a salary of just over $100K. This would indicate, anecdotally (though with a wife who earns a nurse's salary I have a pretty good idea of what's what), that the listings which include salary info are those that are for either more senior positions or those that simply offer a high salary. This makes good sense - if you're offering a nice salary, why not showcase it that fact? Meaning, while senior positions with higher salaries contain earning information within the job listing, other less tenured positions do not.

Salary information within a listing for jobs under $70K is no less pertinent and no less desirable. If other listing creators are ignoring salary information for positions that do not offer an average salary, perhaps you shouldn't. The data points to there being a lack of salary data below the $70K threshold that all things being equal would be highly desirable. Adding in salary information for ranges below the $70K mark could set your job listing apart from others. Perfect evidence of this is that just 165K of the 6 million or so new job listings within a 30-day period contain any sort of salary data!

Google for Jobs Is Starting to Take Off! 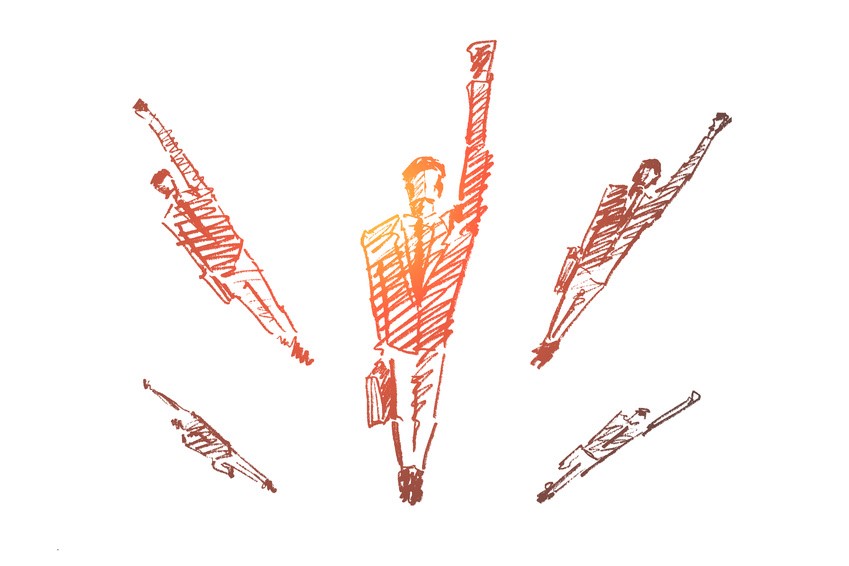 One of the things that most interests me is not only the current potency of Google for Jobs as a source of job listings but its trajectory. From a trends perspective, all signs point to Google for Jobs undergoing continual growth at significant levels. Every single job category within Google for Jobs has seen month over month growth with but one exception (Communications Writing). More than that, 13 job categories have seen monthly growth of over 5% with three categories showing over 10% growth! 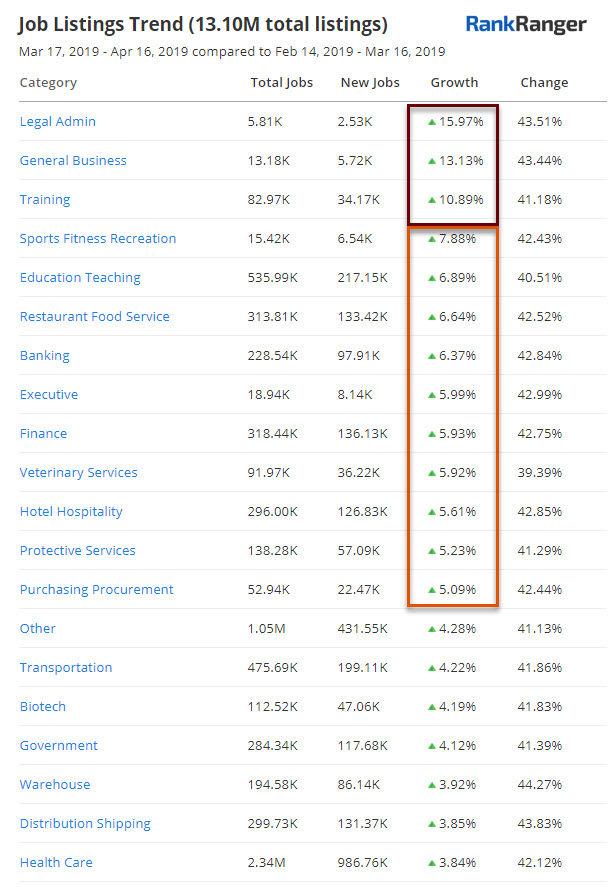 13 job categories saw job listing growth of over 5% as compared to the previous 30-day period
This ascent is supported by the qualitative landscape of the listings contained within Google for Jobs. That is to say, the nature of the listings within the jobs database supports the notion that Google is indeed a job listing heavyweight. While "Executive" jobs present the highest salaries categorically, the individual job titles that reflect the highest earning power are almost entirely from the medical field. 23 out of the top 25 of the best paying jobs are highly specialized medical positions. In other words, some of our society's most highly-skilled jobs are being listed inside of Google for Jobs. 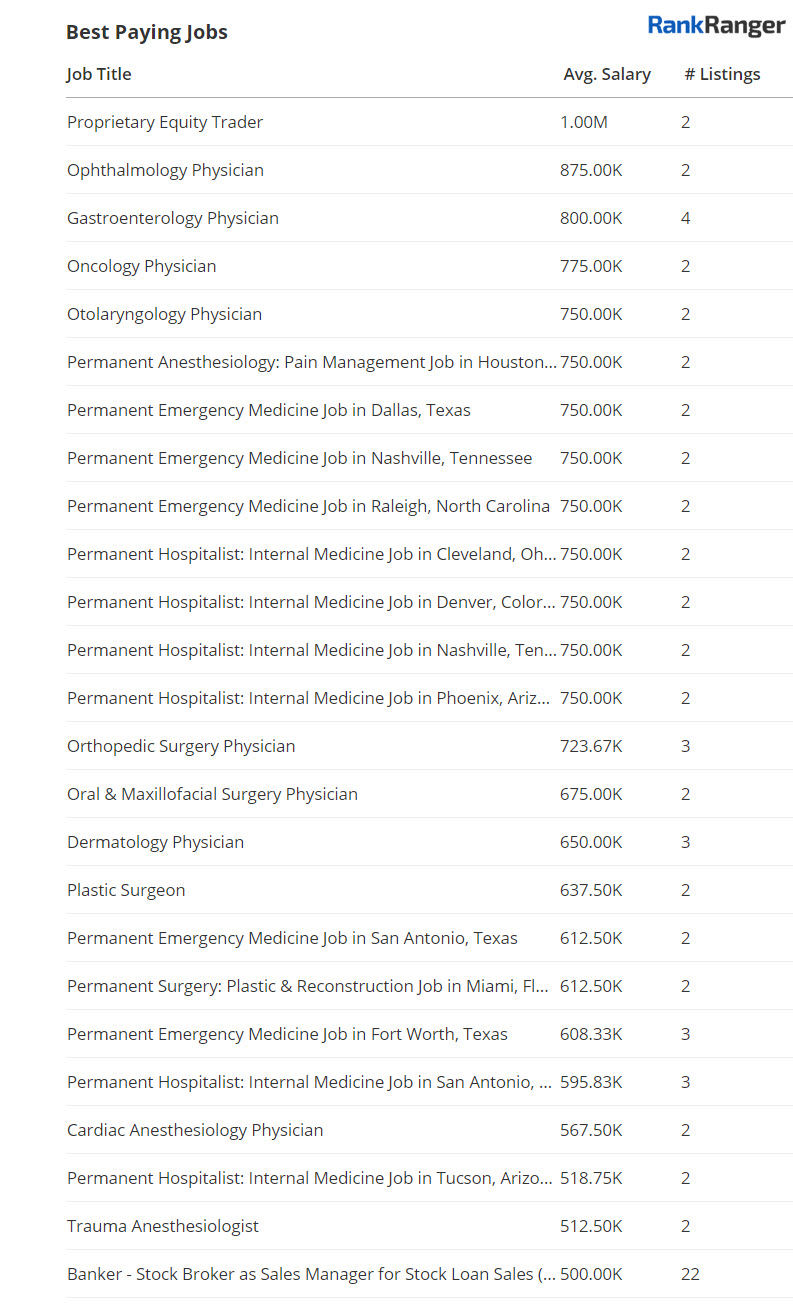 Simultaneously, there is a tremendous amount of job listing diversity. When looking at the most popular jobs within Google's job depository you have anything from staff accountants to Java developers. In other words, Google for Jobs is applicable to a plethora of demographics and to a diverse set of job seekers. 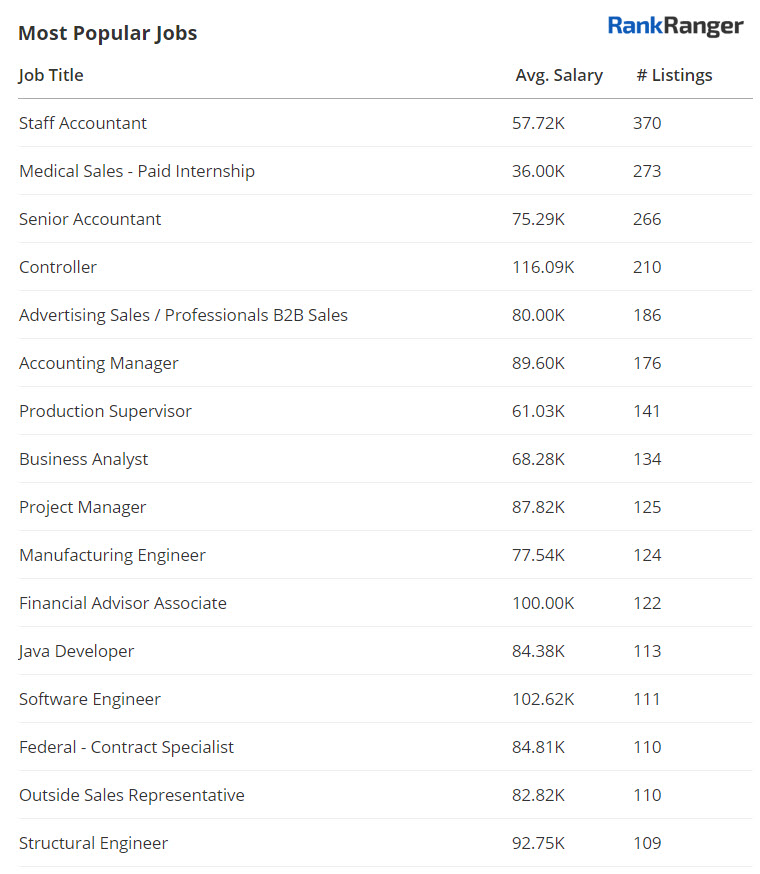 I personally think you need both the diversity and the availability of highly skilled positions for the database to be substantial and treated as such by job seekers. With Google being applicable to job seekers with all sorts of skill sets at all levels of specialization, its growth is assuredly sustainable. 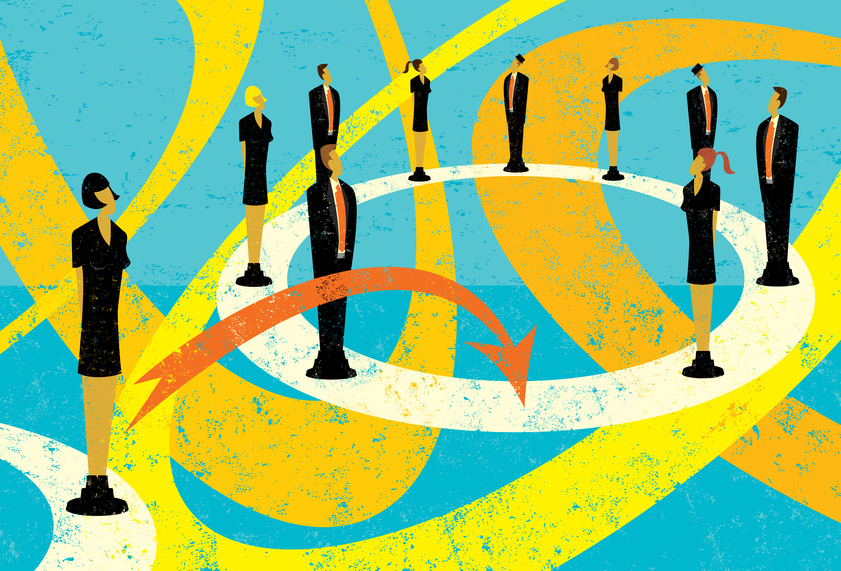 To be honest, I'm a bit surprised that Google for Jobs hasn't gotten more attention from both the SEO and HR communities. For sites that offer job opportunities, whether it be a job board giant or an employer offering direct listings on their site, Google for Jobs, as I hope I've shown, is a job posting "conglomerate" colossus. Knowing what works and what doesn't within it, knowing what job keywords are more effective, knowing what job titles are more common and efficient, etc., can offer serious dividends. It's a new area of SEO that has yet to be capitalized on.

For the world of HR, there is no central job listing location like Google for Jobs. As I mentioned, the sheer number of listings along with its job diversity is in a way unprecedented. Never before have we had access to such an array of job postings under one roof! That means the availability of all-new insights on the state of the job market. What areas are hotspots for what type of positions? What sort of salary information is being disclosed and what do average salaries look like? Where is there job opportunity growth? What job title variations are becoming popularized? These questions need answers.

In short, there are all sorts of untapped opportunities and insights to be found within Google for Jobs. All I see is a platform with the unique ability to present itself to users (i.e., with placement at the very top of the Google SERP) that has a clear path towards continual growth.