A few weeks back I decided to produce a series of articles about Google's SERP features starting with The Complete Guide to Google's Knowledge Panel. A major factor behind doing so was the introduction of Google's Olympic Games Feature which highlighted a new era in Knowledge Panel functionality and depth. To be honest, I had a bit of writer's remorse after walking away from that post. There's really a lot more to discuss considering all of the variations and extensions of the SERP feature. Out of the diverse types of Knowledge Panels none stands out to me more than Google's Health Panel, also known as Health Cards, also known as Dr. Google.


What Google's Health Panel Does

For the uninitiated, Google, via its health feature, offers you insight into countless medical conditions. The Health Panel starts off with an outline of a specific condition that includes a general description of the health condition and is often accompanied by a graphic that represents it in some way.

Now, not every Health Panel is the same and mobile can be slightly different than desktop, but for the most part the panel: 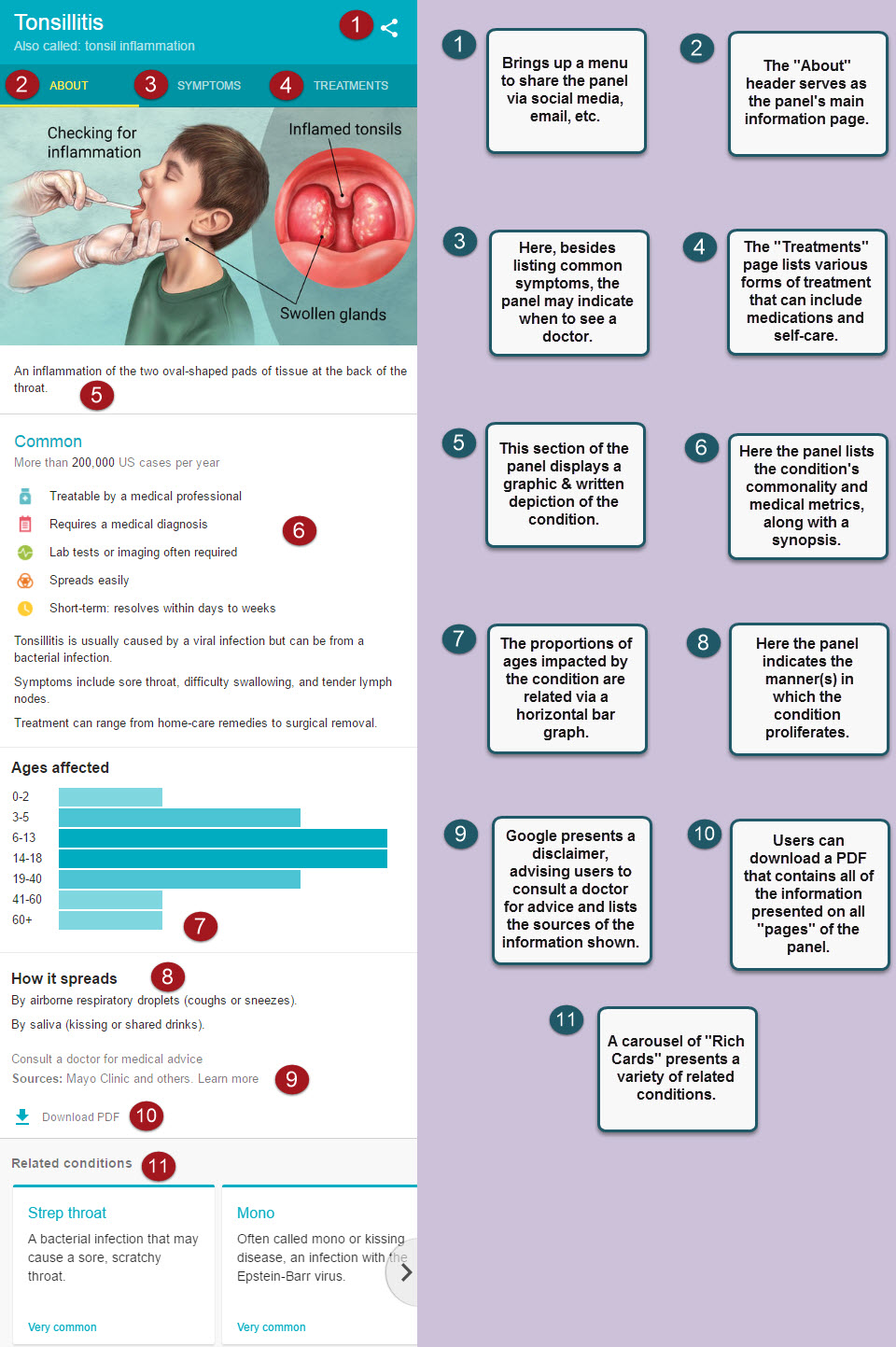 
But wait, that's not all! Google's Health Panel also often indicates related conditions. Did I mention this is just what you see before clicking on anything? There is another header that you can click on to see the symptoms that come along with the medical condition. The panel also enables you to see treatments that often includes a list of medications in addition to home treatment options. In other words, this a hypochondriacs best friend and their doctor's worst nightmare. In all seriousness, Google's health feature packs a powerful information punch that is both inclusive and easy to navigate.

The Knowledge Panel in general presents some pretty interesting functionality, particularly on mobile. However, part of what makes Google's health feature so unique is that it offers a combination of unique functionality.

In my previous post, in what I will now dub my "Google Knowledge Panel series," I showed you how Google's Olympics Games Panel brought mobile functionality to desktop. Like the Olympic Panel, the mobile-like functionality of the Health Panel presents a deep dive into an endless amount of information. 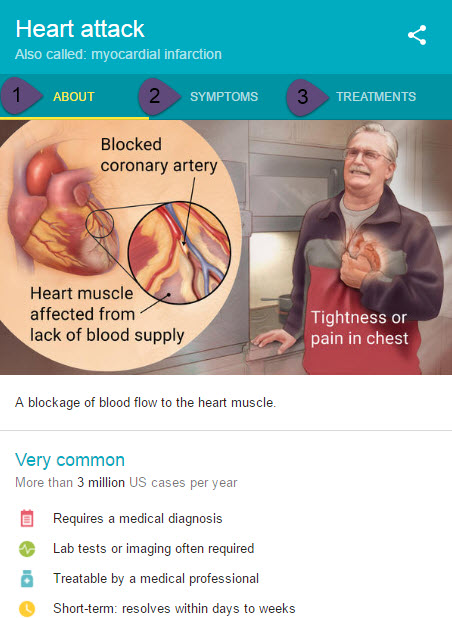 One the neatest things that Google's health feature presents is the dynamic use of various types of functionality. The Health Panel incorporates two forms of functionality that are used as standalone SERP features, Rich Cards and expandable boxes.

Rich Card Carousel: Google's health feature, whether it be on mobile or desktop, often displays with a carousel of Rich Cards at the bottom of the main panel. Interestingly enough, Rich Cards are a feature designated for mobile. These cards fall under a heading called Related conditions (see screenshot below). Within them, Google presents those conditions that are closely associated with the one presented in the panel. Each card lists the name of the condition along with how common it is. Clicking on a card will bring up not only a new Health Panel related to the selected condition, but a new SERP related to it as well. The carousel of Rich Cards containing these associated conditions follows the user as a new heading (i.e. Symptoms or Treatments) is selected. Meaning, that if you move past the panel's main "page" (under the About heading) and bring up the page under say the Symptoms heading, the Related conditions carousel will still display at the bottom of the panel. 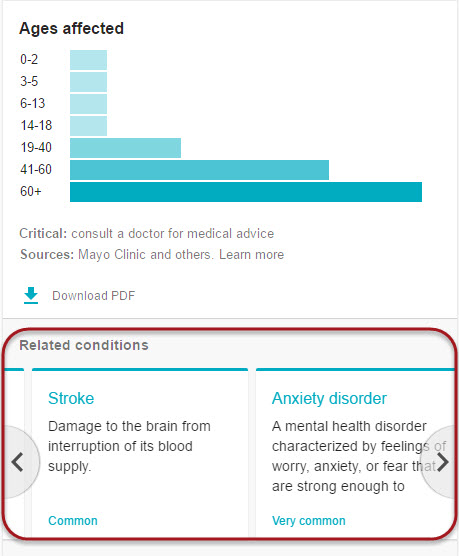 
Expandable Cards: Within the Treatments section of the feature, Google may list various treatment options within expandable cards. You may be familiar with expandable cards as Google also uses them within its Related Questions feature, etc. Each one of the cards serves as a heading of sorts and upon expansion additional information is exposed. Expanded cards often present links to additional medical information or can even expose another carousel of Rich Cards.

Perhaps the best way to highlight both the unique content and functionality of this SERP feature is to take a tour of sorts.

Let's start off with a common cold which brings up the following Health Panel:

A Health Panel displays information related to the common cold


Note that Pink eye is listed as a related condition in the carousel and is marked as "Very common" (and let me tell you, as a former school teacher, it is very common... too common). After clicking on Pink eye, Google brings up the Health Panel on the condition (see below). 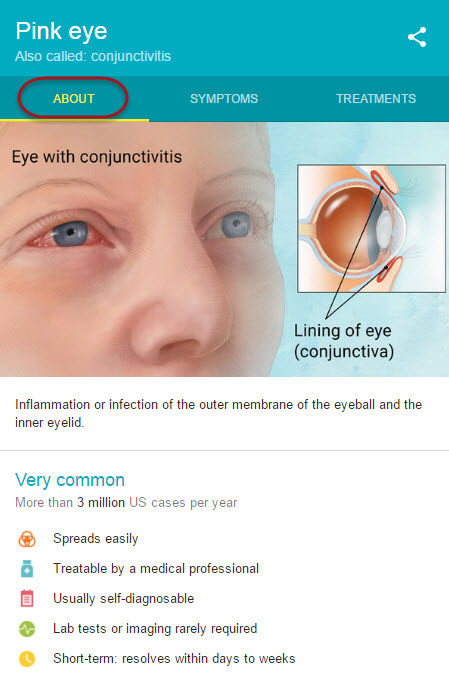 The top portion of a Health Panel related to the eye condition, Pink eye


Clicking on the Symptoms tab brings up helpful information about how to diagnose Pink eye: 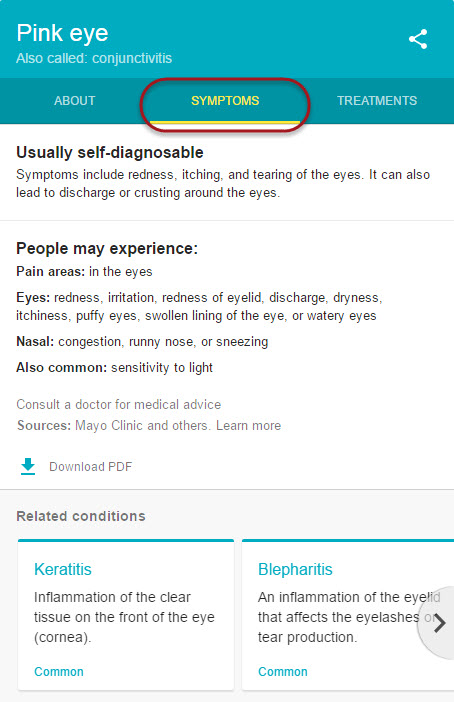 
With our diagnosis confirmed, perhaps we should see what treatments are available: 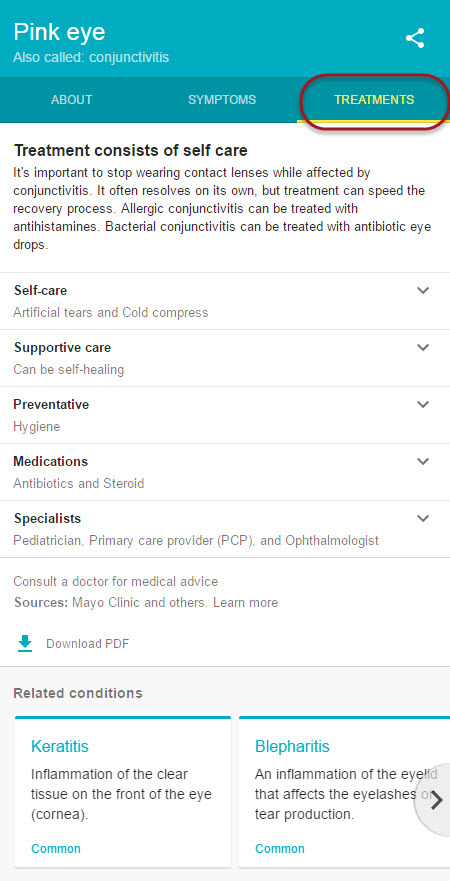 The Treatment page of a Health Panel related to "Pink eye"


Let's perhaps see what medications are commonly used to get rid of this irritating condition:

The Medications card expanded and presenting a secondary card which has also been expanded, revealing a carousel of antibiotics


I wonder what Ofloxacin is? (Say that ten times fast!):


Hello! What do we have here? Why it's a Health Panel showing medication information where clicking on either Side Effects, Interactions, or Warnings will bring you to a page on the U.S. National Library of Medicine site. 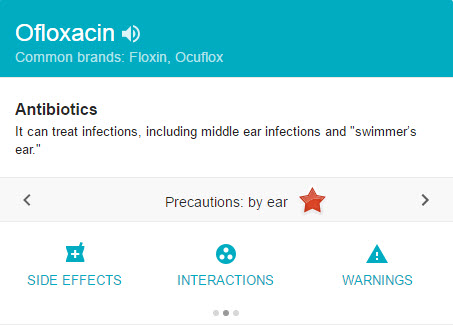 Precautions for Ofloxacin when taken via the ear


and into the eye as well: 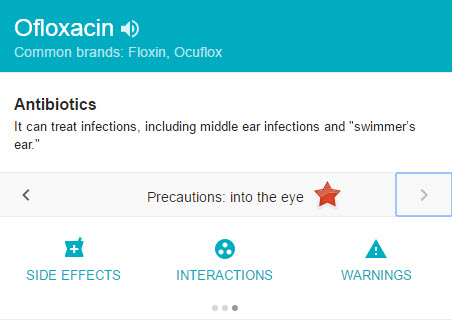 
Just to highlight how prolific this feature is, Google's Health Panel says that Ofloxacin is used to treat Leprosy. And so with the wealth of knowledge found within Google's health feature, we've gone from having a common cold to a rare biblical disease in under 60 seconds!


One thing is for certain, Google's Health Panel is an exhaustive source of medical knowledge. Via its unique functionality, the feature offers the full spectrum of medical information. I would think, if used correctly, the information contained in the panel could very well help patients be well-informed, empowering them to be greater advocates for their own medical care. Though, the feature does bring up the question as to whether or not the average person is really suited to self-diagnose.  Also, like some of Google's other deep diving panels (such as its Olympic SERP feature) the Health Panel may pose significant competition to health information sites. Personally, WebMd.com was one of my go-to medical sites, but with Google's feature I have not used the site much at all. Either way, Google's Health Panel is a well-designed, interactive medical information library for the online age.