I love the Olympics and I'm the first to admit that I have Olympic fever. There's something about the Games that excites just about everyone even those who aren't regular sports fans. Maybe it's the variety of events, the intense competition, the fact that the athletes are not paid, I don't know. All I know is that like many people out there I find the Olympics to be pure sportsmanship at its best that is totally and completely captivating. Gone are bitter rivalries based upon silly happenstances, gone are fans of opposing teams cursing one another out over nonsense that happened 100 years ago. The Olympics is all about sports with none of the nastiness that competition often conjures up. The Olympics are less about testosterone overload and more about the drama of pushing one's physical limits (which may be why more women watch the Olympics than men). The only problem with the Olympics is keeping tabs on all 300 or so events in which 10,000 or so athletes compete. Enter Google who rolled out a new homegrown feature at the top of the SERP that makes tracking Olympics 2016 Games a cinch. 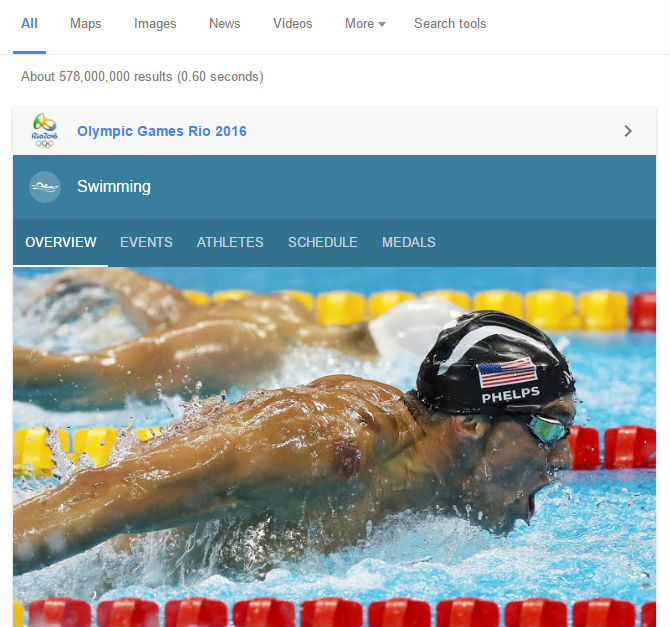 To quote Google, "in celebration of the next chapter in Olympics history, we’re bringing the best our products have to offer to help people around the world stay up-to-date with the Olympic Games Rio 2016." In real terms, this means that Google has developed a SERP feature that organizes and tracks the Olympic events, athletes, medal counts by day, country, athlete, sport, etc. The feature appears to have been developed specifically for the Olympic games as nothing of its kind has been seen on Google to date (at least not on the desktop SERP).

Google's Olympic feature presents itself right on top of the SERP, above all other results when the query relates to the current Olympics. Queries such as Rio Olympics 2016 or Olympics Results will bring the feature up (a query such as Olympic History will not). Worth noting is that Google's Olympics feature is so prevalent, that seemingly a generic query for any sport taking place at the Olympics such as "rowing" will bring the feature up. I personally did a search for swimming, not swimming race or swimming gold medal – just swimming – the activity every kid in camp does for six weeks and Google assumed I meant swimming as related to the Olympics and brought the feature up with a big 'ol picture of Michael Phelps.

With this introduction, let's look a bit deeper into the feature itself and then we'll consider what the implications for SEO may be going forward.

Google's Olympic feature on the SERP itself lists today's featured competitions with times and statuses and it also shows an updated tally of the medals the top countries have received so far.  Nothing too out of the ordinary so far. The surprise occurs when you click on one of the menu items to search by Sport, Schedule, Athletes, etc. One might expect to land on the website of the International Olympic Committee or possibly NBC or CBS Sports. Instead, you're instantly transported to a comprehensive, multi-level Google knowledge panel with "pages" outside the SERP.

Although this feature provides a lot of information, I think this still falls within the category of a knowledge panel, one that doesn't just exist on the SERP, but has depth – a deep knowledge panel. It's not a mini website, because it's informational only. You won't find articles describing what happened during the competitions or stories about the athletes themselves as you would on traditional websites covering the events. 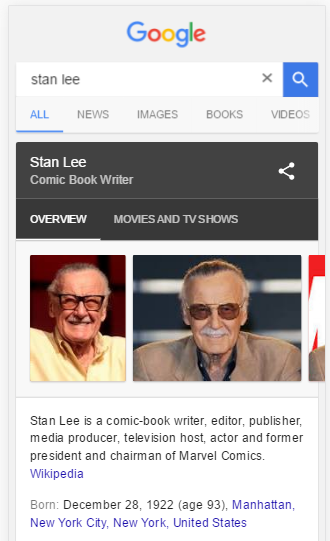 Clicking on the "Athletes" link brings you to a page with the names and photos of all the Olympic participants. You can apply a filter to show only athletes from a particular country or show either male of female participants and you can sort by number of medals or by what's trending. If you click on an athlete, you'll see their photo, the medals they've won so far (or haven't), the events they have or will participate in and how they've ranked in each competition. Below that, there's a carousel of other "athletes people also searched for" to choose from. Notably, in the mobile version, a top news stories carousel is also displayed with relevant articles about the athlete.

The UX of this knowledge panel is very similar to the generic mobile knowledge panel which provides information on the SERP itself, but also has a menu with links to "inside pages" (see our Visual Guide to Google SERP Features for more information). For example, if you search for "Stan Lee" on a cellphone, you will see a knowledge panel with on-page info at the top of the SERP (see screenshot) and, in addition you will see that there are menu links to "Overview" and "Movies and TV Shows" which link to inside pages providing additional information about the individual or topic. Another similarity between the Olympic desktop and generic mobile knowledge panels is that the inside pages don't display the organic search results for the keyword the person searched for, but at least on the generic mobile there is a link to display the search results. >

The Olympics knowledge panel, like Google's search engine itself, is aware and sensitive to your preferences. As you use the feature, Google will list information it thinks is relevant to you above all other related material. For example, if Google notices that you have an affinity for rhythmic gymnastics (you know, the one where the athletes twirl that colorful twirly thing... spoken like a true NFL football fan), athletes related to that sport will appear before any others on your screen.

An Eye to the Future

The bigger question that SEO professionals and website owners might be asking themselves is the following: Is this new type of knowledge panel, what I referred to as a "deep knowledge panel," a limited feature that Google will roll out from time to time for special events, or is it a prototype for much more deep Google content that we will see on the ever-changing SERP playing field? The answer to this question is – Only time will tell. I don't see Google sharing their plans so we'll just have to wait and see.

One could overact to this development and question "what use is it to work on my client's keyword rank if there are going to be features like this (as well as ads) pushing my results into the deep end of the page one results?" It's important to put things into perspective though. As I pointed out earlier, this knowledge panel provides a lot of information about the Olympic games in Rio, but anyone really wanting to read about what actually happened at the competitions and feel the excitement will not use this knowledge panel as a replacement for the traditional sports sites. Therefore, at least in this particular example, the SEO guy and his client at NBC or CBS sports can breathe a sigh of relief knowing that they are still competing for rank with each other and not with Google's new deep knowledge panel. Enjoy the games!