Google Has Removed the Search Box Feature from the SERP


Dearly beloved we are gathered here today, on Google's very own birthday, to announce the departure of the Search Box SERP feature from the face of the earth. In less dramatic terms, Google has removed its Search Box feature from the SERP on both desktop and mobile. The removal is uniform, and as such, applies to every country that previously carried the feature.


Search Box Is Removed from the SERP Globally

As of September 25th, our SERP feature trackers for both desktop and mobile began noticing a steep decline in the number of Search Boxes appearing on  SERPs worldwide. After declining sharply for two days, the feature's removal process was completed.


For those unfamiliar with the feature, the Search Box allowed you to search a site's contents directly on the SERP. The feature appeared below the meta-description within an organic result in the form a slim rectangle box that allowed the user to search within the pages of a displaying website directly from the results page, with the user being taken to the search results page on the target website (as shown in the image below). 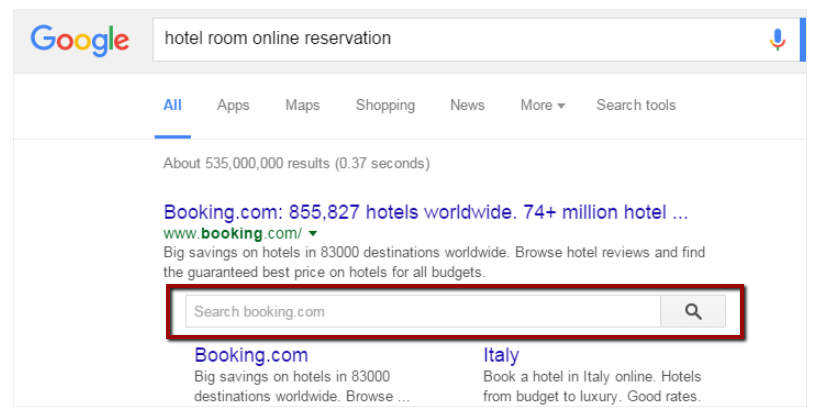 As indicated, the removal of the Search Box feature was universal. Meaning, no country shows the SERP feature on its SERP any longer. This applies to both desktop as well as to mobile. 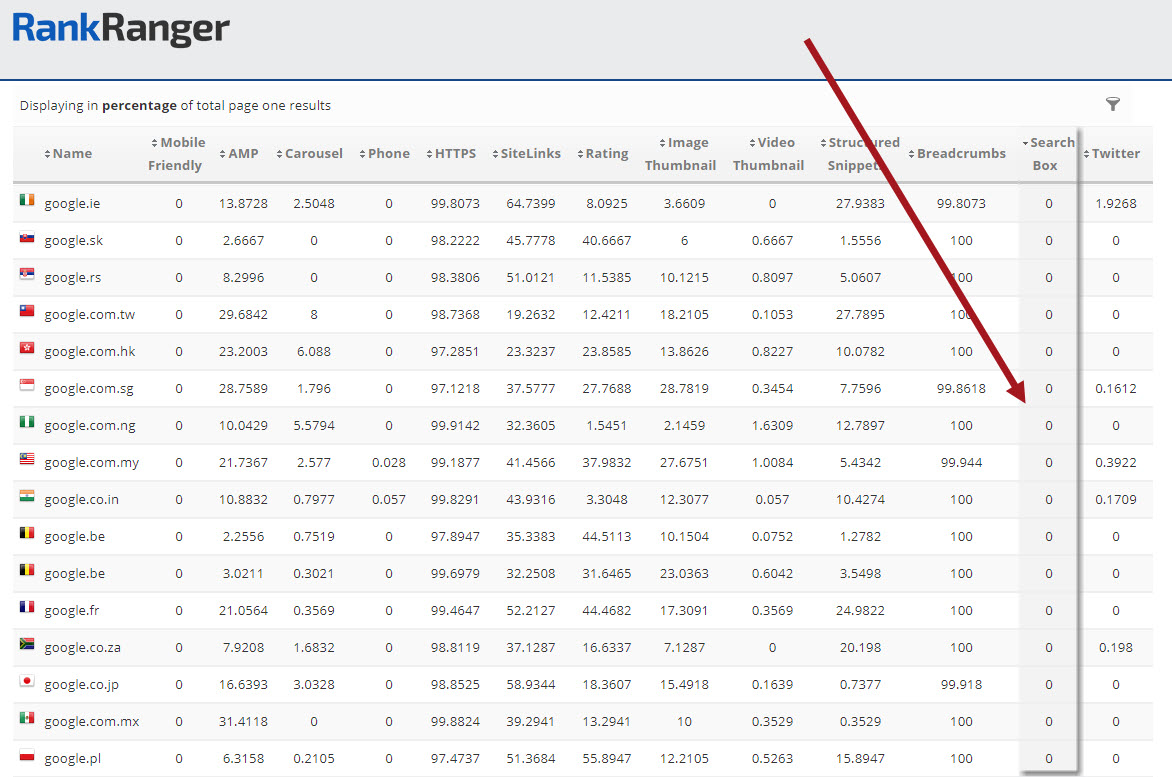 In the past, there were a variety of site types that would generally show with a Search Box under certain circumstances. Universities, when searched for directly on Google by name, often appeared with the Search Box feature.

Back in early November of 2016, upon reporting that Google had eliminated the Notable Online SERP feature, I had presented screenshots of direct searches for both Harvard and Yale Universities, as shown below: 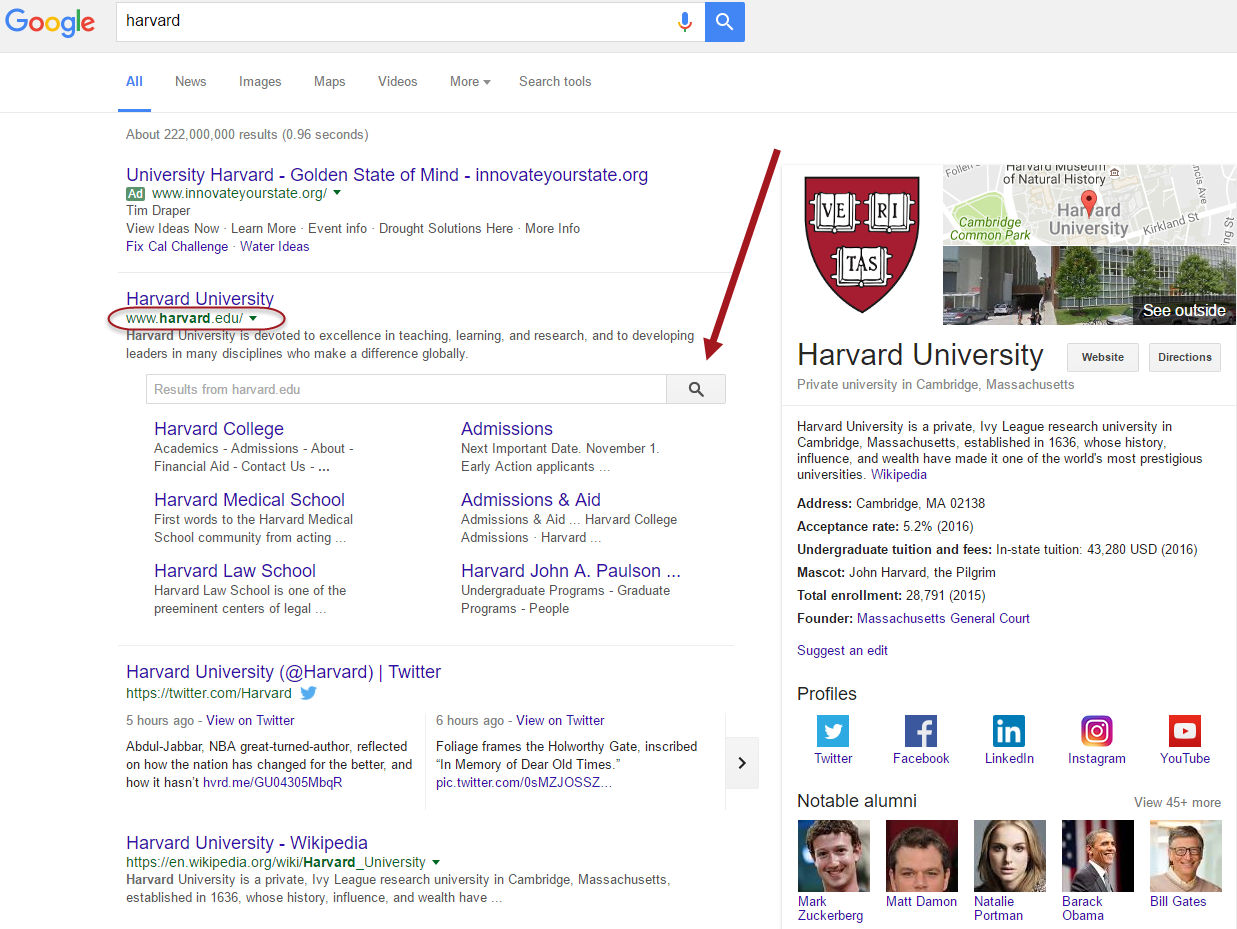 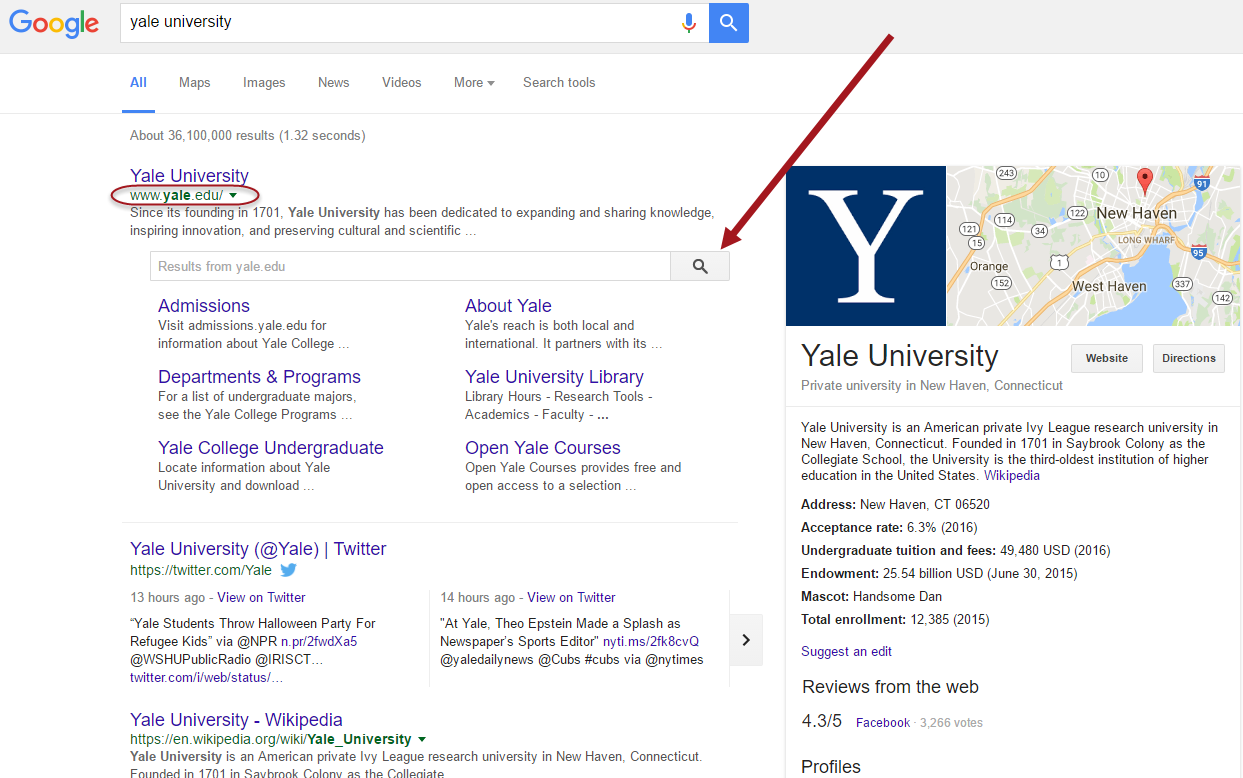 In both instances you can clearly see that a Search Box exists within their organic listings.

Such is no longer the case. A search for Harvard came back as: 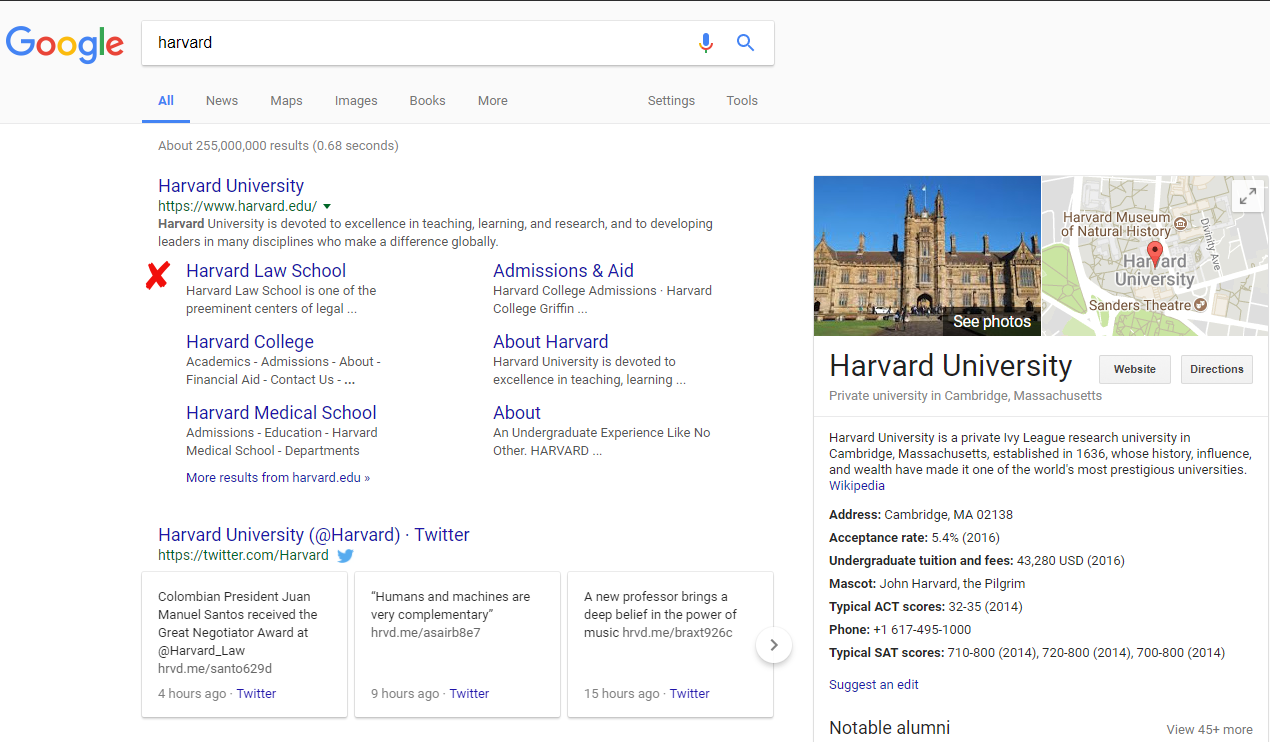 Again, undertaking a direct search for Yale and the below is the result: 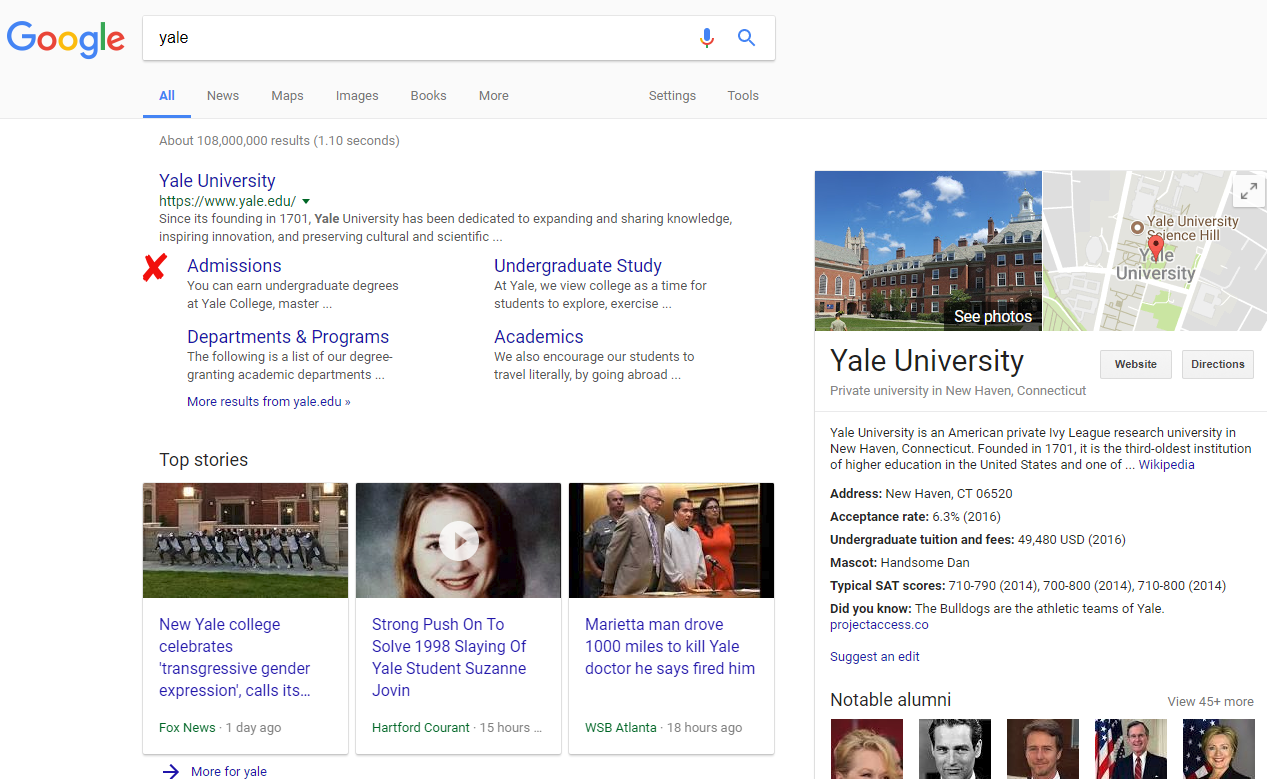 As can been seen, the Search Box feature is no longer present for these organic results.


Direct searches for agencies of the United States government also traditionally came back with a Search Box within the specific agency's organic result. The below is a screenshot of a direct search for dept of state on mobile a few months back which clearly shows the Search Box: 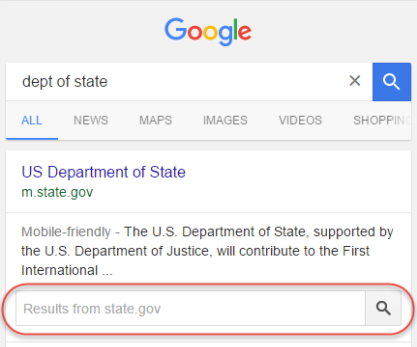 Today, the same search on mobile does not produce the SERP feature: 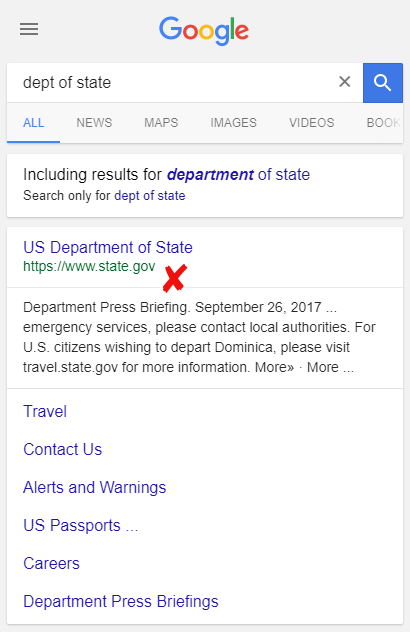 Lastly, though the Search Box SERP feature was never prominent, it would almost always display within Wikipedia's organic results. This is no longer the case as evidenced below: 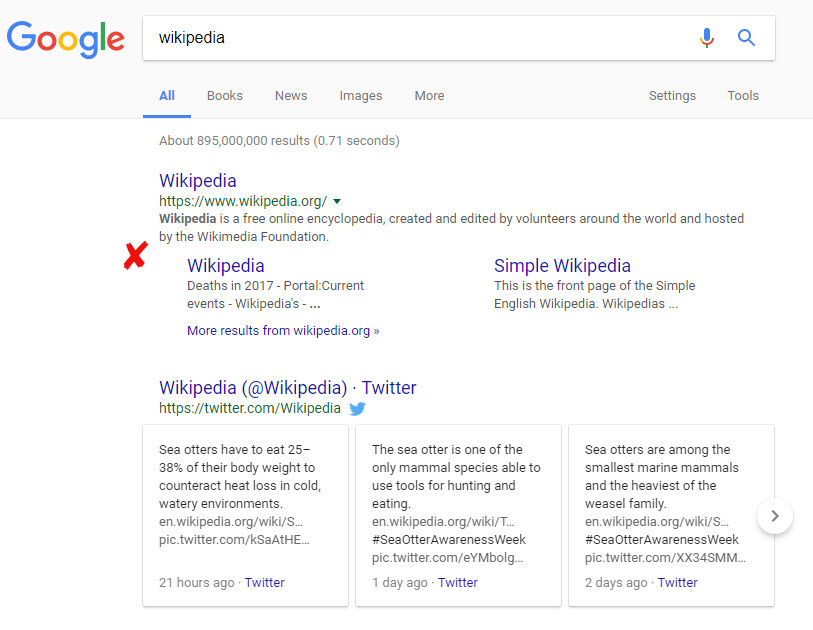 While Google has yet to officially confirm that it has removed the Search Box feature from the SERP, there is good reason to attribute its elimination to lack of use. The SERP feature was never a powerhouse by any means and traditionally only showed on a minuscule number of Page One SERPs. In all honesty, it almost made no sense to have the feature with such a low display rate. Being that Google hardly ever showed the feature in the first place, users could obviously not engage with it. I can only speak personally here, but even when the feature did appear, I never used it. Thus, it makes good sense to say that Google removed the Search Box feature simply because it was not a factor on the SERP. Whether Google will formally declare why it removed the feature remains to be seen of course. In either event, the Search Box is one SERP feature that I would wager will hardly be missed.


Update: As of October 3rd Google has fixed a bug that resulted in the SiteLinks Search Box being removed from the SERP. As the bug has been fixed, the SERP feature has returned to the SERP globally.