I didn't plan on writing this post. I was only checking up on how some SERP features were performing, which I do on occasion (translation: every day). But then, like the 4th of July fireworks I always seem to miss, things started popping, and the one or two SERP features I was tracking, turned into more than just that. Then it hit me like a rocket's red glare, a bomb bursting in air, Google snuck a series of SERP feature trajectory shifts into its last update.


Multiple Mixing Marathons on the SERP

If you're going to throw rank stability out the window, why not throw a few more SERP structure shifts into the mix at the same time? While not throwing caution into the wind exactly, this is what Google in-effect does. When rolling out an update, Google takes the opportunity to shift all sorts of things around. Some known, some unknown. This is not exactly a secret, Google has indicated they roll out multiple updates simultaneously on more than one occasion. For example, back at the end of September 2016, Google removed 50% of Image Boxes from page one and migrated them to page two. It also used the opportunity to reorganize rankings now that these page one SERPs had a vacancy as Image Box had made like Elvis and left the building known as page one.


Here we are now on the heels of what was a massive and elongated algorithm update that deeply impacted rankings. True to form, Google has ushered in additional SERP alterations on the back of its most recent update. Thanks to our desktop and mobile SERP feature tools, I've tracked a series of significant adjustments to the trajectory of a number of SERP features that all coincide with the recent update. Meaning, there were shifts in the data paths of the features, as they were not one day movements with a subsequent return to normalcy.

Let's get right into it. There were a series of high-profile SERP features that changed data paths along with the end of June Google algorithm update. The below will not include those features that altered course along with the update, but did not show substantial movement (i.e. Breadcrumbs, Reviews, Video Thumbnail, etc.). I mention them however since their movement in conjunction with the update further indicates that Google purposefully shifted SERP feature trends as it rolled out last week's update. With that here are the features that shifted on desktop:

The Answer Box does not get the attention it deserves. Up until recently, this feature appeared on over 50% of all page ones. Meaning, on over 50% of page one SERPs, there was a box that gave the users the information they were searching for, but did not contain an organic link. (Note, 10% out of this figure are Featured Snippets, that do have an organic link, leaving 40% of the top showing boxes without one.) I do not need to go into the organic traffic implications of this little data tidbit. 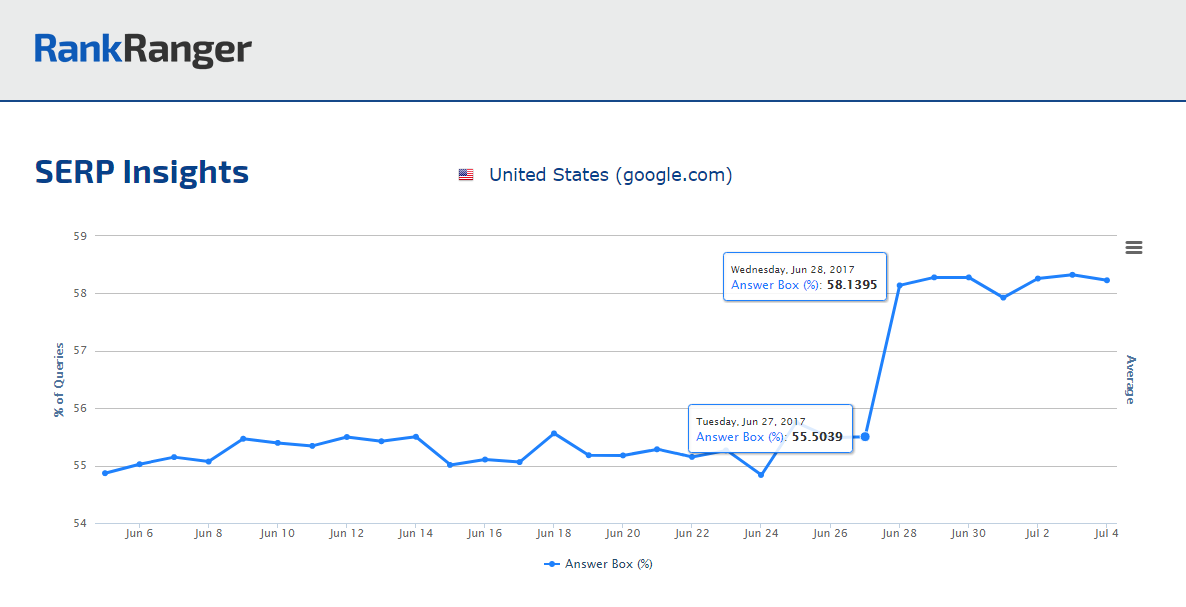 
However, Answer Boxes, due to the recent update no longer appear on 50% of the first page of results. No, they now appear on almost 60% of all page one SERPs. Between June 27 and 28, and aligned to the concurrent update, the feature went from a 55.5% showing to 58%. This 4.5% uptick is indeed significant. In all honesty I thought 55% was pushing the limits a bit, but at nearly 60%, that is an overwhelming majority that I must admit I did not expect so soon and that can significantly impact the organic elements on the SERP.

Again occurring between June 27 and 28, Google's Knowledge Panel took an uncharacteristic downturn, moving from a 10.6% page one showing, to a 8.6% rate of display. The downtrend reflects an almost 20% decrease in the feature's page one presence. Currently, the feature sits at below 8%.


What's intriguing here is that the shift is unprecedented. Looking back at the data since the start of 2017, and the feature has, from a relative basis, fallen off a cliff. Since the start of the year, even multiple day downtrends have not resulted in the loss of more than a percentage point. Here we're talking about a two point turn, which is visually striking when seeing the data plotted graphically (see below).

Yet again, along with the update, one of the most prominent SERP features underwent a June 27-28 shift. Local Packs saw a page one boost of 3 percentage points, moving from appearing on 39% of page one SERPs, to 41%, a significant 7.5% increase.


Wrapping up the data for desktop, a look back at Local Pack's performance in 2017 indicates that this spike is the single largest shift, up or down, the feature has seen all year.

The increase in Local Packs is the year's largest spike

Moving on to mobile and the cast of characters showing data shifts expands a bit. The big three indicated above are joined by an additional feature unique to mobile, and also of SERP notoriety. Here too, there were a series of SERP features that shifted along with the update, but not substantially. Again I mention this to paint a fuller picture of what transpired. In any event, let's begin with the three features noted above and see how they performed on mobile.

Here on mobile, Answer Boxes had appeared on 25% of page one SERPs, roughly half that of desktop. Mobile Answer Boxes also shifted as part of the recent Google update, just not up. The SERP feature saw a loss of 1.5 percentage points, dropping from 24.2% to 22.6%. Like on desktop the shift occurred between June 27 and 28.

Like on desktop, mobile Knowledge Panels took an unusual turn downwards moving from 9.2% to 7.4% on page one. This too constitutes a near 20% downgrade in the frequency in which the feature appears on page one of the SERP. 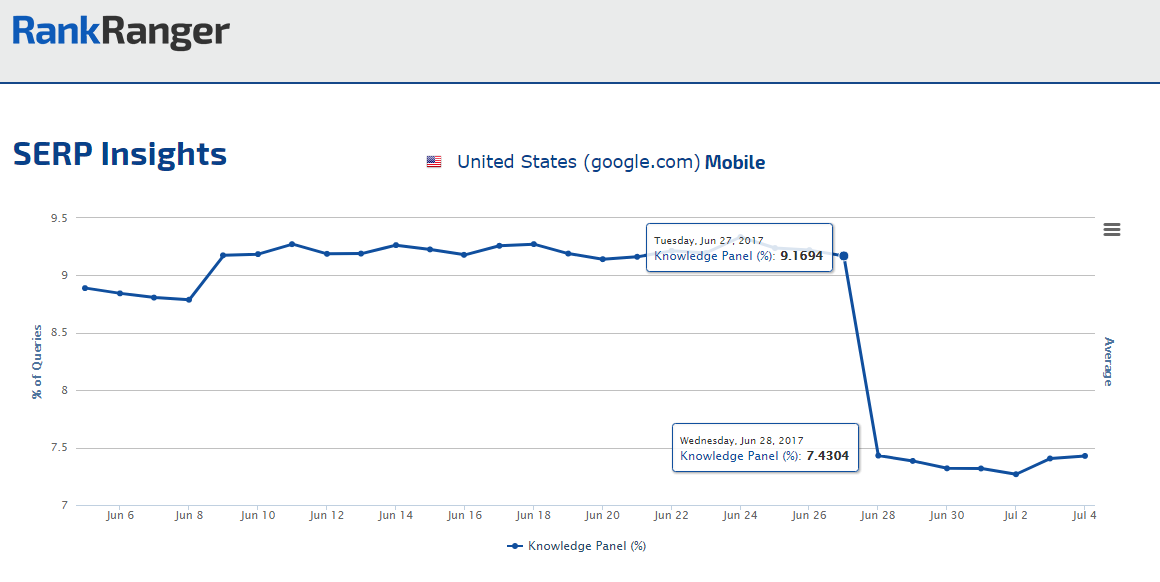 In line with the timing of the recent Google Update, mobile Knowledge Panels underwent an abnormal decrease

Rounding up the features that shifted on desktop, Local Packs on mobile saw a roughly 2 percentage point increase between the 27th and 28th, moving from just over 32% to a tad under 34%.

Last, but certainly not least, and unique to mobile is AMP. As this SERP feature is unique from the pack of features referenced above, its data pattern is a bit different. As opposed to mainly fluctuating over a one day period, AMP showed a two day spike that went from June 29th through July 1st (i.e. not from June 27-28). In fact, the increase the feature undertook is the smallest of the data shifts noted here, falling under a full percentage point.

AMP shows an increase during the Google update, but according to a different pattern than other SERP features


Yet, the data is still significant. The increase from a page one presence on 15.6% of SERPs to 16% is tied for the largest increase in AMP on the mobile SERP since it lost 25% of its first page showing back in April. It also signifies the feature gaining 2 full points back from its April falloff. When looking at the more recent AMP trends, this spike could signify that Google is close to restoring AMP to its previous glory.

SERP Feature Shifts and a Google Update - Does It All Add Up?

What's the significance of Google altering SERP feature trajectories on the back of its most recent update? There has to be a pattern, a connection right? Maybe... Of course while the possibility that there is some sort of grand connection between the two SERP events is logical, it is not necessary. It could be the case that Google ran two parallel, yet unrelated SERP updates simultaneously. In other words, there is another possibility besides for some thematic connection between the update and the SERP feature shift, efficiency. It could simply be more efficient for Google to queue its various updates, and run them all at once. While that's not as dramatic or interesting as the alternative, I personally think it's more likely. You?