Google’s new algorithm update "Possum,” a name adopted by some in the SEO industry, is filtering out duplicate and spammy results in the Local Pack and in Google Maps in an attempt to provide more quality and diverse results for people searching for a local business or service. I'll examine what Possum is supposed to do and then we'll take a first stab at assessing how well it's carrying out its mission. 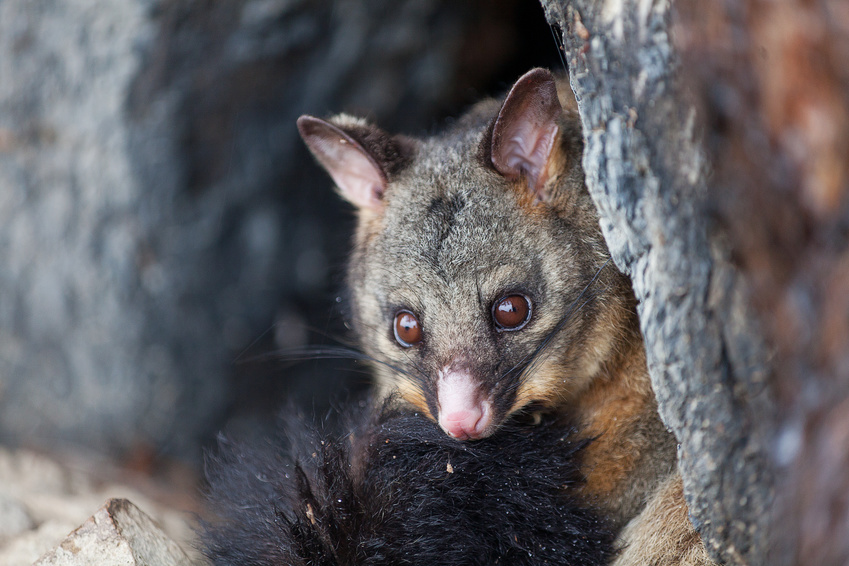 At the beginning of September, Rank Ranger’s Rank Risk Index captured a very large spike in rank volatility. There was a lot of discussion in the SEO industry pointing to a significant Google update which had occurred, but it was not yet clear what the update affected.

Since our Rank Risk Index tracks volatility in organic results specifically, it was clear that a large algorithm update which affected organic results had been rolled out. However, about a week ago, Joy Hawkins, one of the leading SEO experts on local search, revealed that another part of this update drastically shifted the rank and visibility of businesses in local packs, Google Maps, and Local Finder (the Local Finder is the screen that you see after clicking on "More Places” at the bottom of the Local Pack).
Based on dozens of ranking reports she analyzed, Hawkins said  "This is the biggest change I’ve since in local since Pigeon in 2014. I don’t have a single client that wasn’t affected.”
According to Hawkins, Google’s aim with this update is to remove the duplicate and spammy business listings in the Local Pack results. Up until now, in order to increase the diversity of results, Google would filter out local listings that shared the same website domain or phone number. As such, a group of lawyers or practitioners sharing the same website and telephone number would see one or maximum two listings in the local results. With this update, Google is now filtering out listings that share the same physical address as well. This makes it much harder and more expensive to get duplicate listings. Arranging for a different physical address is definitely more involved than getting another website and phone number.
According to the experience of Hawkin’s clients, Google is not only filtering out businesses that share the same physical address, but even businesses that have a different suite number at the same address are being filtered out too.
Hawkins is convinced that Google has some way of recognizing when two businesses are jointly owned because one of her clients is a dentist who owns and operates two separate offices in the same area, will not see both offices listed at the same time within the Local Finder.

A few days after publishing her post about Possum, Hawkins was interviewed by Conrad Saam of Mockingbird, a firm which provides SEO services to attorneys. In that interview she provided more interesting details about Possum. She said that Google’s update is not a penalty, but rather a new filter. The update is not deindexing sites, it’s just favoring other listings. The proof, Hawkins said, is in the fact that a business may see several of its locations disappear from the results, but its main listing remains unaffected. If it were a penalty, the main website would not get away unscathed, she said.
So as of now, this update is not penalizing websites, but Hawkins predicts that this could change if Google sees that the update is not successful in filtering out those who are manipulating the system. 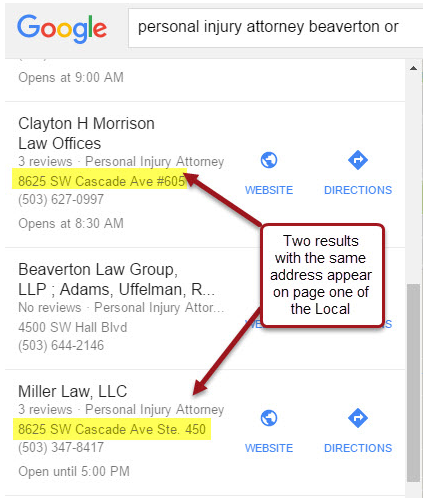 Two business listings with the same address in the Local Finder
Unfortunately, I think that Google’s Possum needs to be fed some more vitamin-packed veggies because it’s still not managing to filter out even obvious duplicate listings. In the results of the above search, I found two local listings for the same attorney. Both listings shared exactly the same physical address and telephone number but the business name and website address were different. How this slipped by Possum... I guess this is a work in progress... 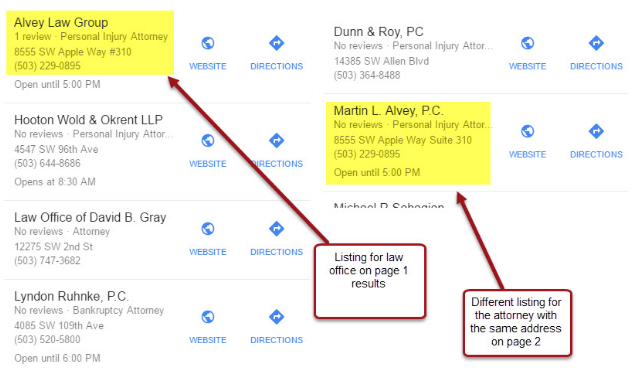 A business with two listings in the Local Finder, same address and telephone, but different website

The rolling out of Google’s Possum update only reaffirms the importance of being able to accurately track and optimize websites on Google Maps, Local Packs, and local search results. There is an enormous amount of competition in local search in general, and on mobile searches in particular. As a result, rank tracking and optimizing is essential for a website to gain visibility and bring in business.
Trying to monitor local search results from a particular location is faulty because the search results will be affected by browser personalization and IP, as well as browsing and search history.
Only professional rank tracking tools, like Rank Ranger’s, that have the capability of executing and recording the results of location-specific searches can provide accurate results that can be relied upon.
About The Author

Tzvi Barish
Tzvi is the SEO Manager at Rank Ranger. He has 15+ years of experience in content marketing and SEO.