In fifty years from now, two old men will be sitting in rockers on the front porch of a cabin deep in the woods. Silently whittling wood into arcane objects to be barely tolerated by their families and embarrassingly placed on the mantelpiece, one will turn to the other and say, "Remember when you had to scroll down 'the Google', scouring for jobs listings site-by-site? Whatever happened to that?" 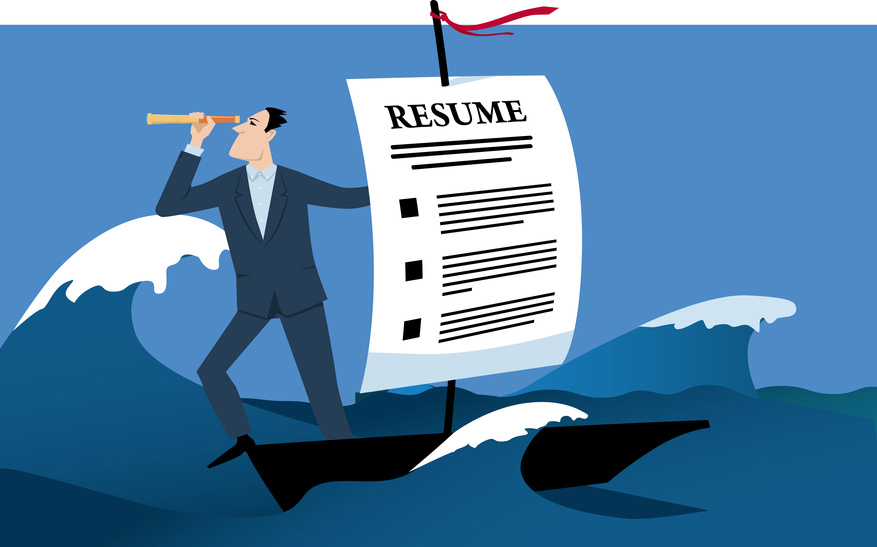 I'll tell you what happened, Google for Jobs came along and the significance of organic rankings for job related queries all but became as much of a relic as these two fellas sitting on the porch. The Google for Jobs feature is a massive conglomerate that is set to corner the online job listings market. Follow me as I show you how the new feature is set up, what it does, and why it is sure to be the go-to job search tool (I'll even throw in a bonus theory as to why this matters so much to Google).

What Is Google's Job Feature (aka Google for Jobs)

Remember way back when, if you wanted to find a job online you had to hop from site to site just make sure you covered all of your bases? Those days are unequivocally gone. Google for Jobs is a SERP feature that amasses job listings from across the web (from job listing sites and so forth) into one massively beautiful work of SERP feature art. Simply, it's an enormous database of job listings that is presented in a user-friendly way.

Seeing is believing right? (Less words for me to type too!) So let's do a Google search for senior care jobs boca raton florida (this way we can be sure there are an adequate number of job listings). 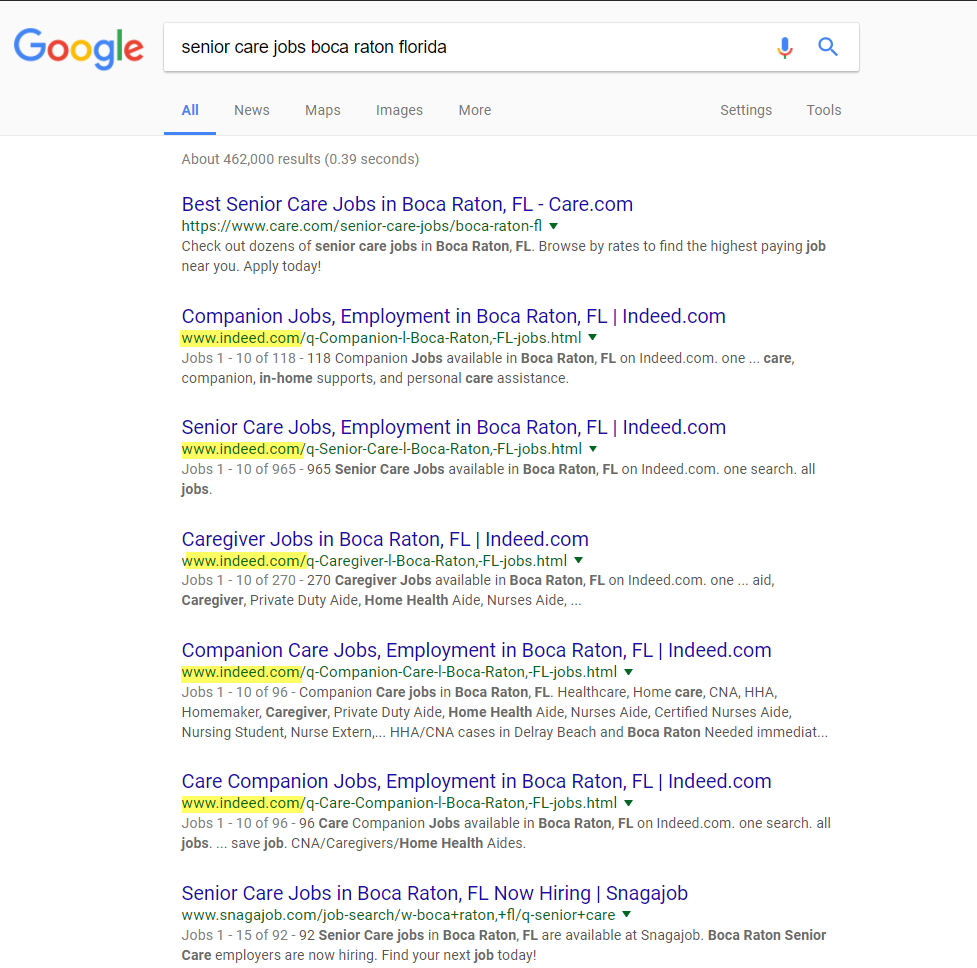 So hats off to Indeed.com, you guys are the SEO kings of job listings. However, you and I know there are other major job listings sites that are relevant to any job seeker (monster.com, careerbuilder.com, Linkedin, etc.). Not only would you have to scroll down the SERP and hop from site to site to find all the listings you were searching for, but you would have to move past page one in this case just to get to the rest of the big name sites.

Returning now to the luxury of modernity, here's how the same query looks on the SERP in the "modern" age: 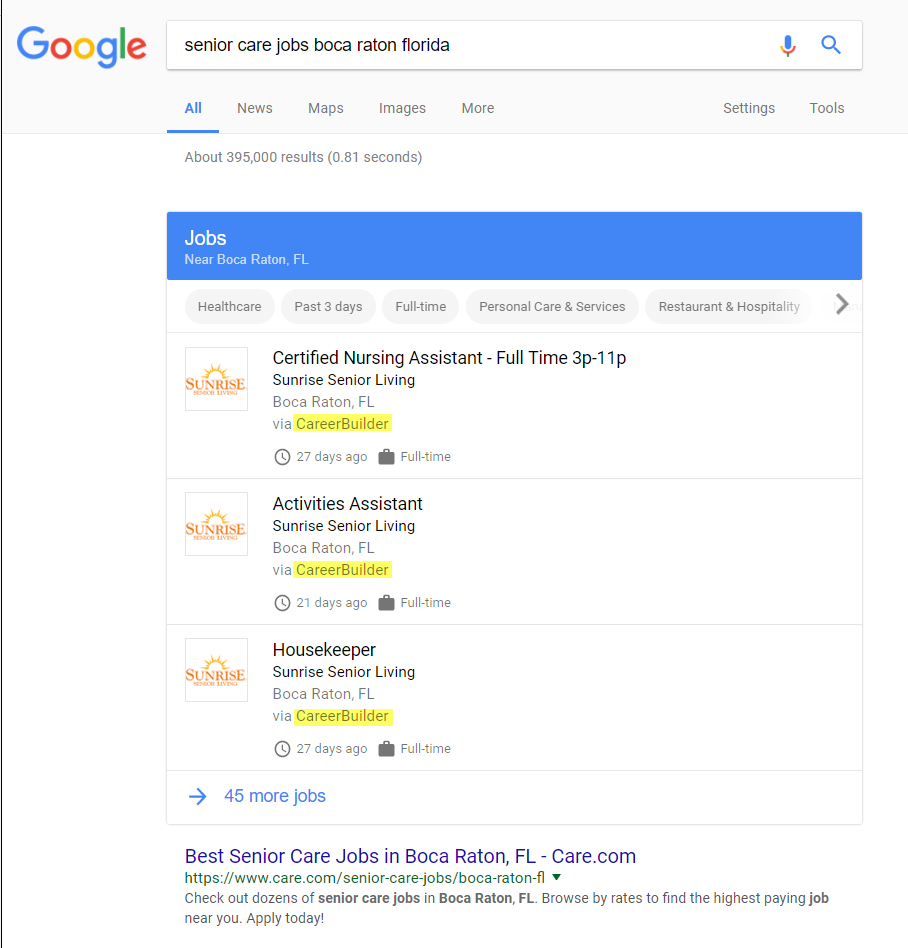 Now, you might argue that we're no better off. Whereas organic rank was dominated by Indeed, the Google for Jobs panel here is occupied solely by listings off of CareerBuilder. Where is the job listing diversity and the streamlining that comes with it?

It's right here, sorry about that: 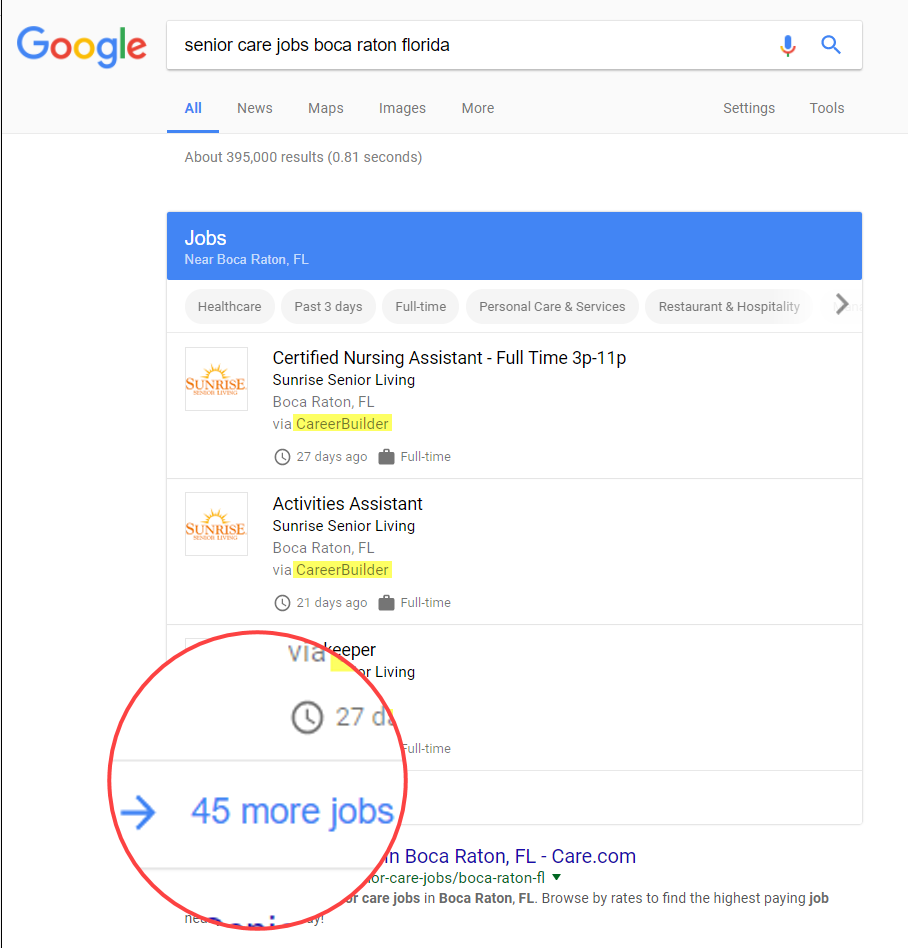 Technically speaking that's just a link, here they are in actuality: 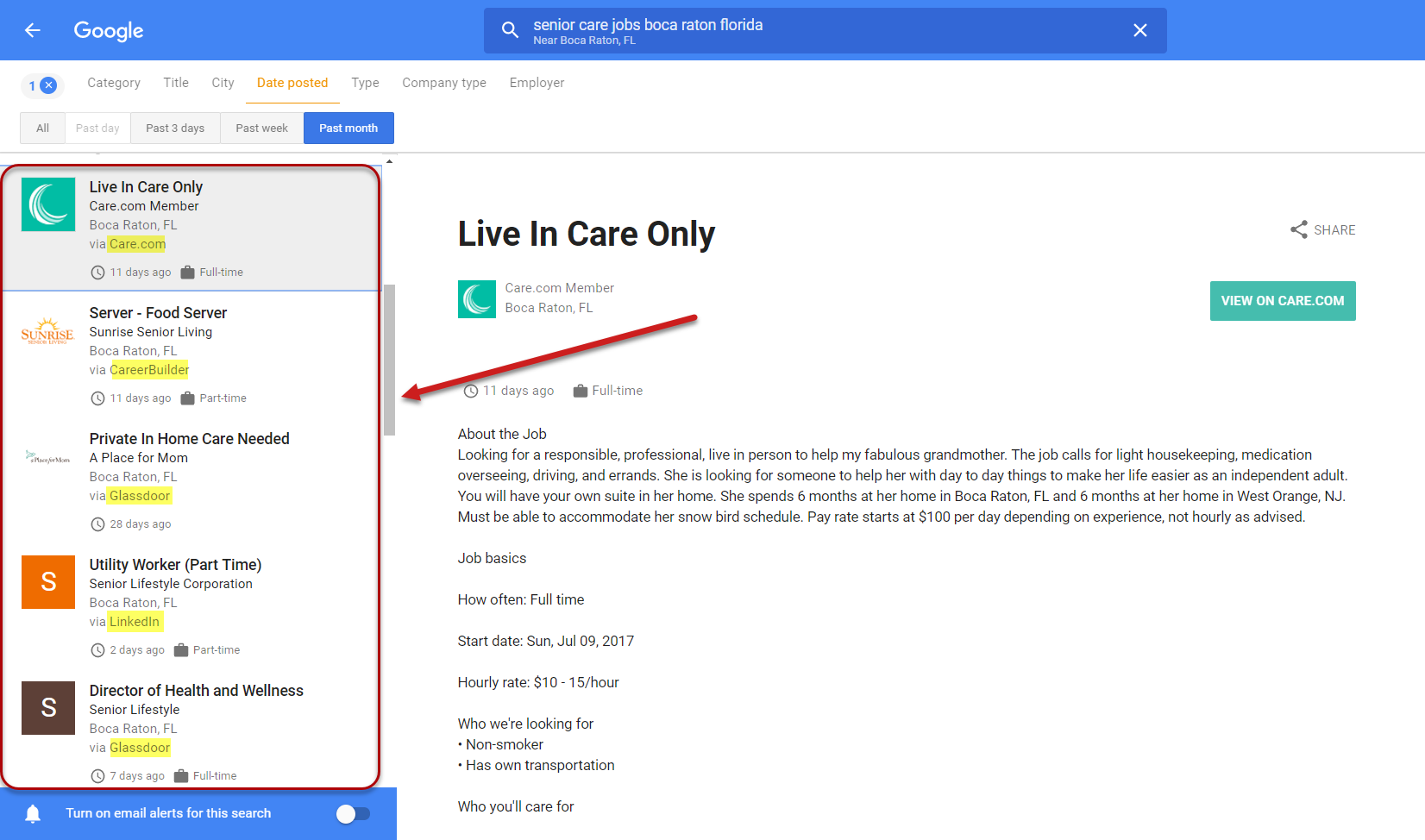 While initially only showing three job listings on the SERP, Google for Jobs contains an extensive list of jobs for any particular query. These listings, as you can see above, are collected from a slew of sites that include the traditional job sites, but also those found on LinkedIn as well as industry specific job listing sites.

So what is Google for Jobs? It's a collection of job listings from the web all under one roof with a lot of bells and whistles to make the job hunt as efficient, easy, and productive as possible.

Google for Jobs - How Does It Work? 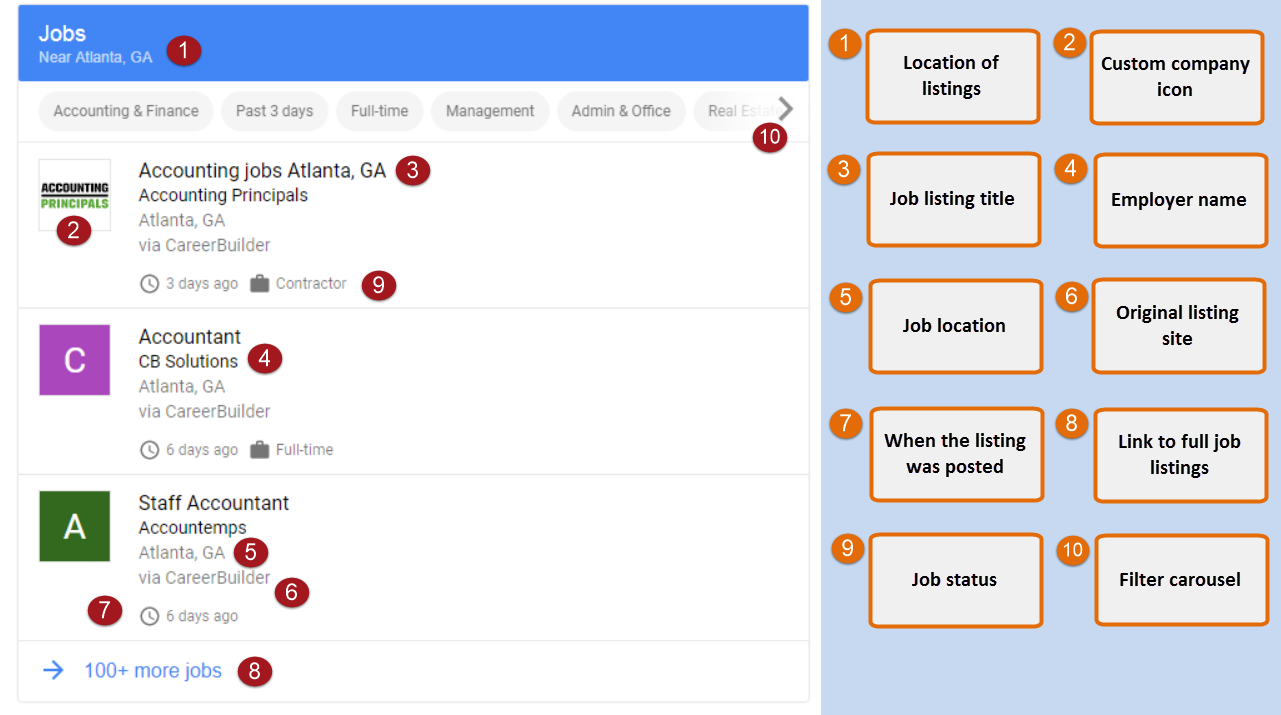 Assuming your query is similar to any of the above, the new Google for Jobs feature should appear at the top of the SERP (maybe under an ad or two). What you get initially is a bit straightforward at first glance. The SERP itself shows three related job listings in a box that looks somewhat similar to a mobile Local Pack.

Each listing includes the job title (obviously), the company offering the position, the general location, the site where the listing was originally posted, as well as when the job was posted. Depending on the position, a " job status" (which Google calls Job Type) next to a briefcase icon may appear, indicating if the position is full-time, part-time, etc. This job listing 3-pack of sorts is nice, but doesn't do the feature justice.

Sitting on top of these three job listings is a carousel of filters, where we get our first whiff of the true job listing mania. The filter carousel allows you to refine your job search according to:


Jobs titles have various shades of meaning. To help you track down exactly what you're looking for, Google includes sub-categories within its set of filter options. What do I mean by "sub-categories" exactly?

Think about it like this, job titles are not linear entities. Rather, each job takes on many forms, and exists uniquely within various industries. What in the world am I talking about?

Let's do a search for chef new orleans jobs: 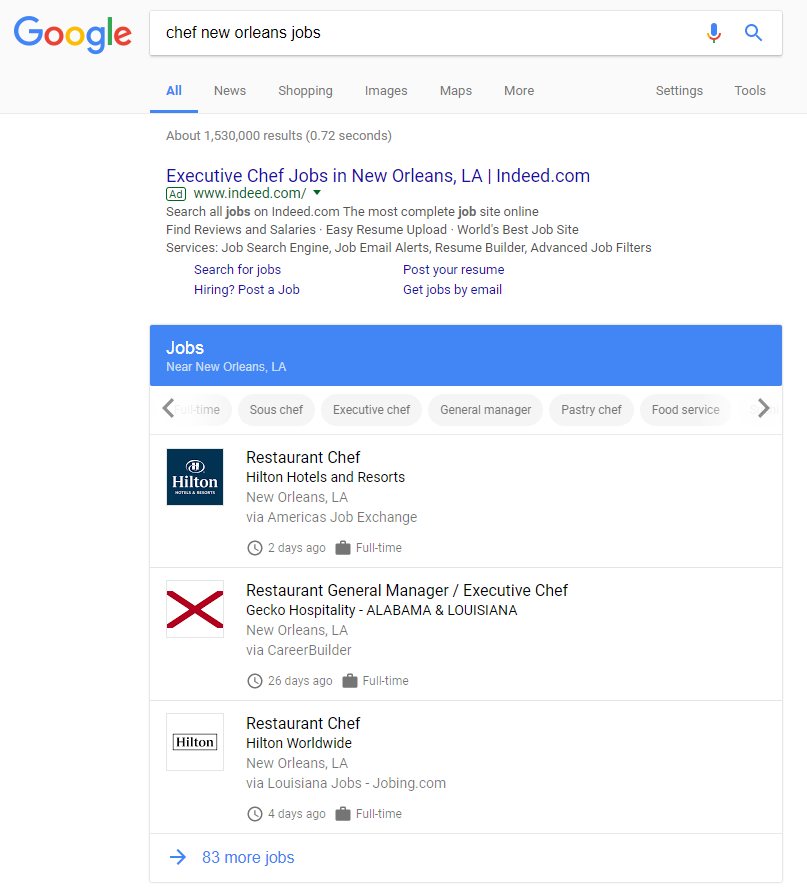 Perhaps though our query was too general... after all there are numerous kinds of chefs. Are we looking for a job as a sous chef, a rotisseur, a saucier, perhaps our skills are best served as a pastry chef?


If I could direct your attention to the carousel above the results, you'll notice some of the above-listed chef variations: 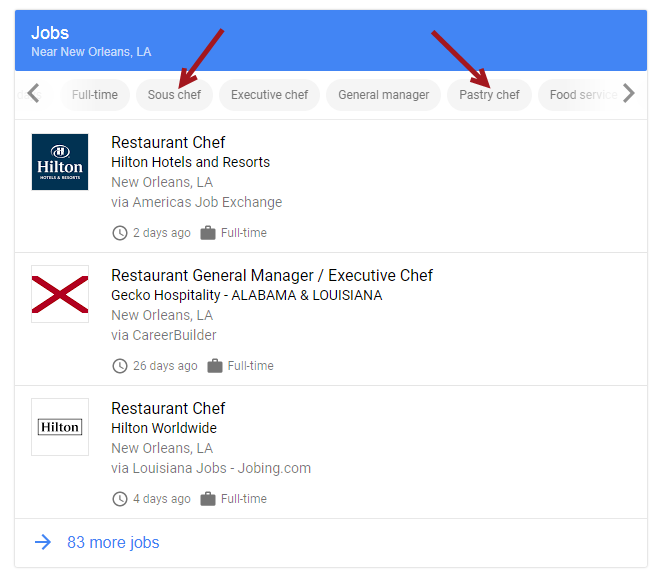 Let's try another search now, lawyer jobs washington dc (should be a few of those in the nation's capital): 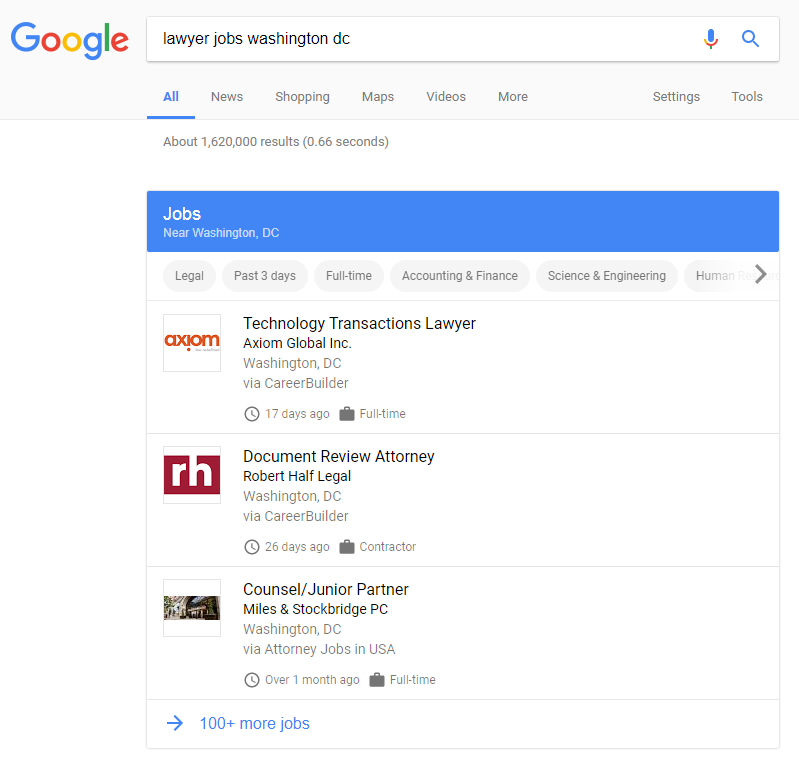 This is a very broad job query, especially for this particular industry in this particular location. What type of attorney are you? Do you practice corporate law, environmental law, real estate law, do you chase ambulances, etc.?

Just like Google offers you a way to refine the specific nature of your job (see the listing results for chef new orleans jobs above) you can also specify the industry within which you would like to search.

Again, let's have a look at the filter above the results: 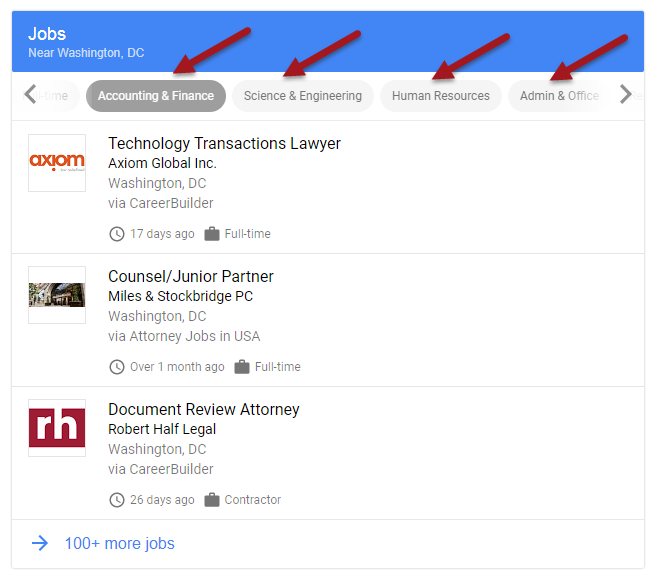 So again, specifying and refining your jobs query is a readily available option within Google for Jobs.


Getting the Full Job Listings Story 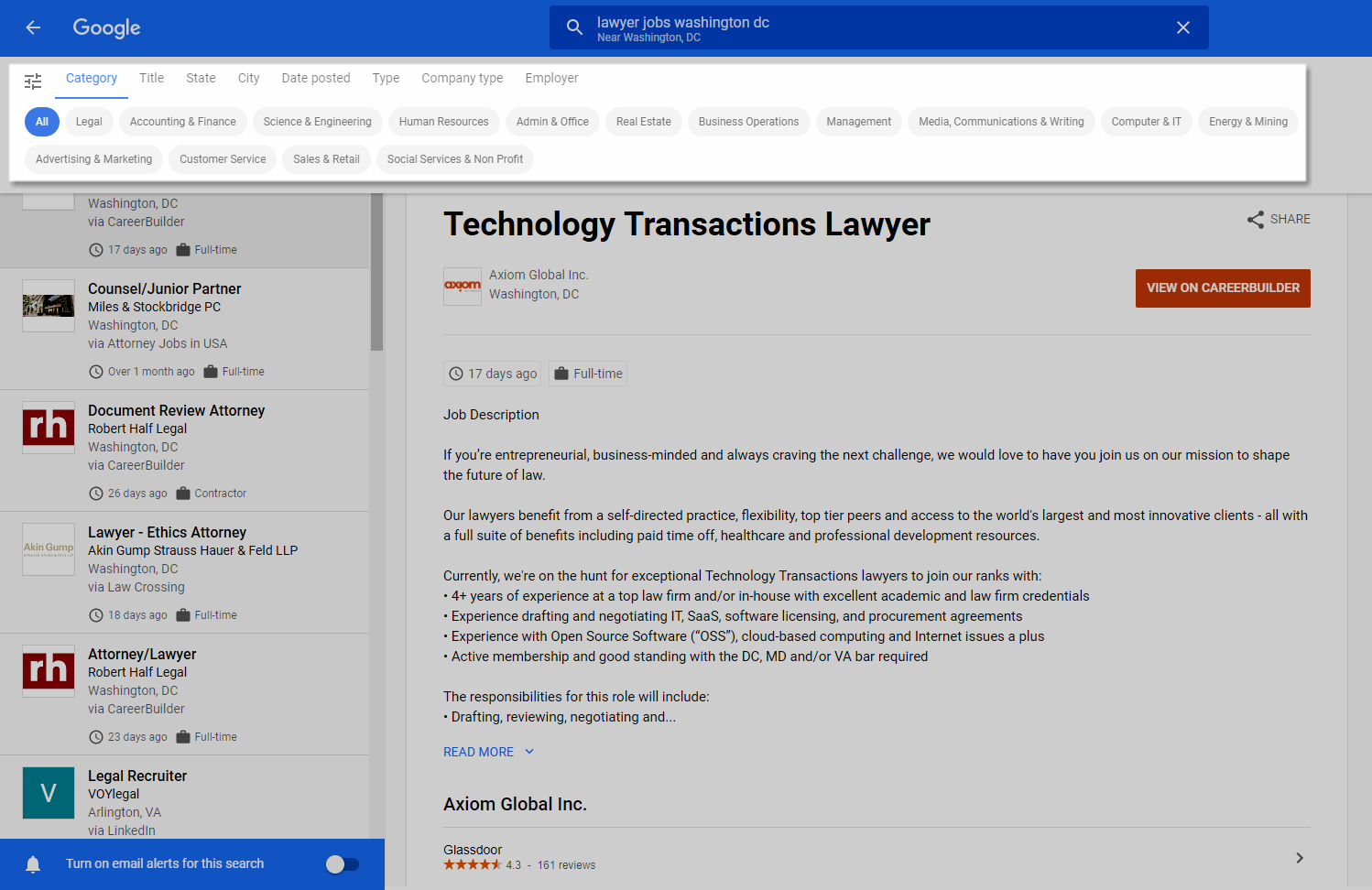 What you see initially on the SERP is just a prelude to the real deal. Let's take a new search, something broad that will give us a bit to work with... therapist jobs new york: 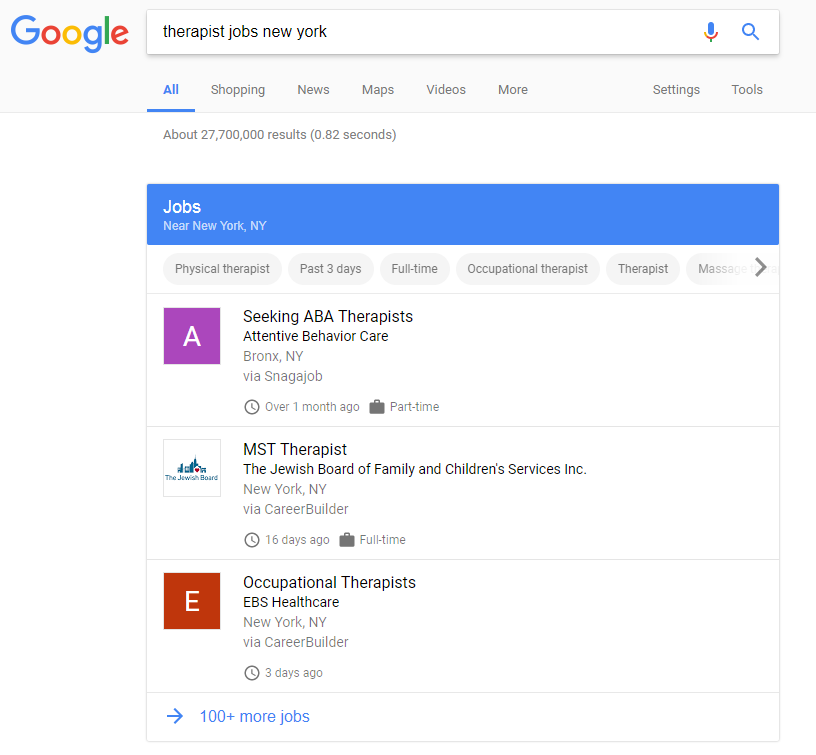 These are the initial three results, which up until now is all we've seen... but there's a lot more... as you may have noticed in the image above, there are more than 100 jobs for us to pick our way through.

Here is what we get upon clicking on the link to see the full list (which is also accessed by clicking on one of the three main listings, or by engaging the top filter, though only results that align to the filter option selected will show, not the full unfiltered list): 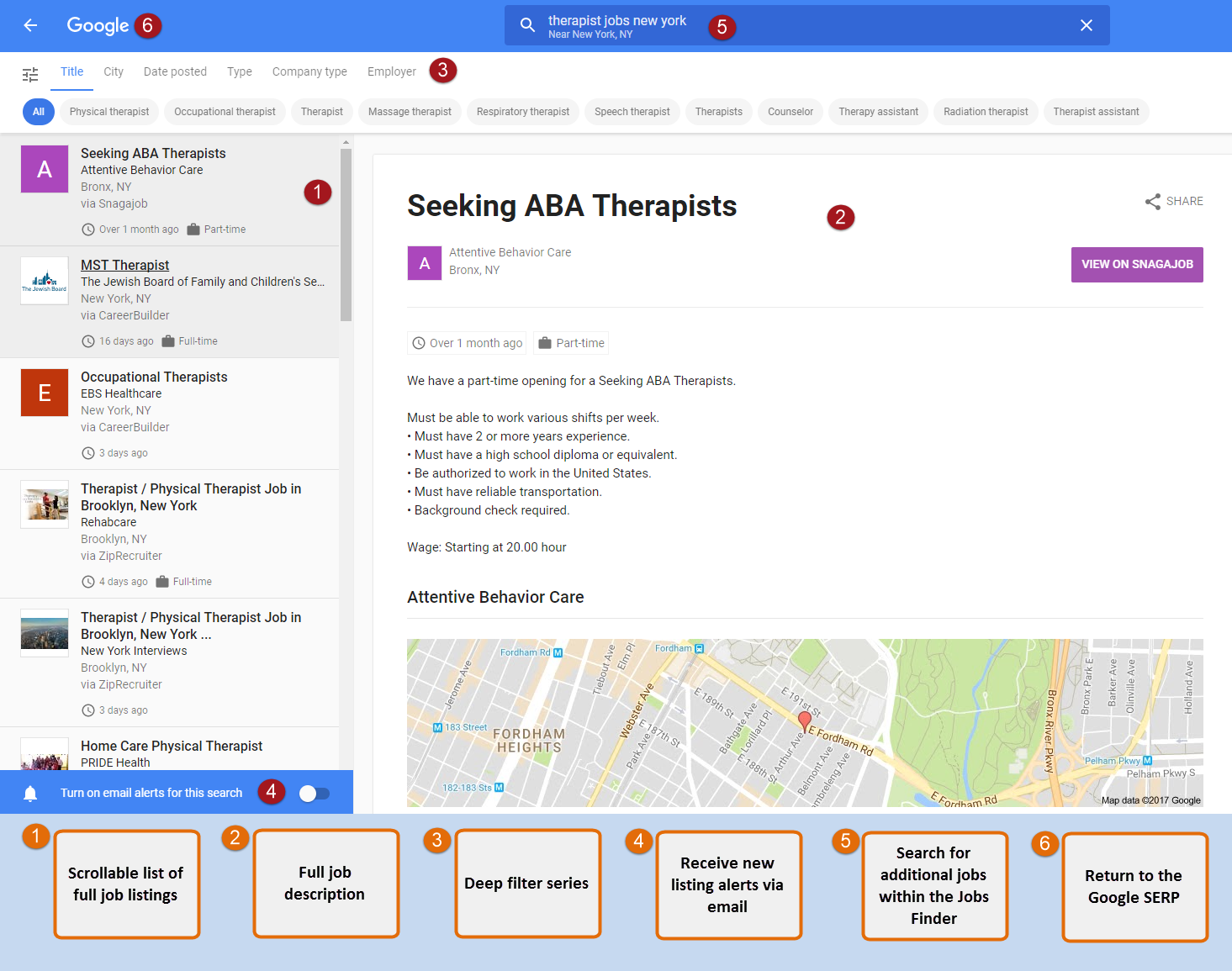 What we have here is very similar to what we find when a Local Pack is expanded and the Local Finder appears. So I'm going to call this, the Jobs Finder. The Jobs Finder includes:


Let's actually play this search out and try to refine it a bit, since therapists is so broad a term and the New York job market so large. To start, let's narrow what we mean by therapist down to something a bit more specific: 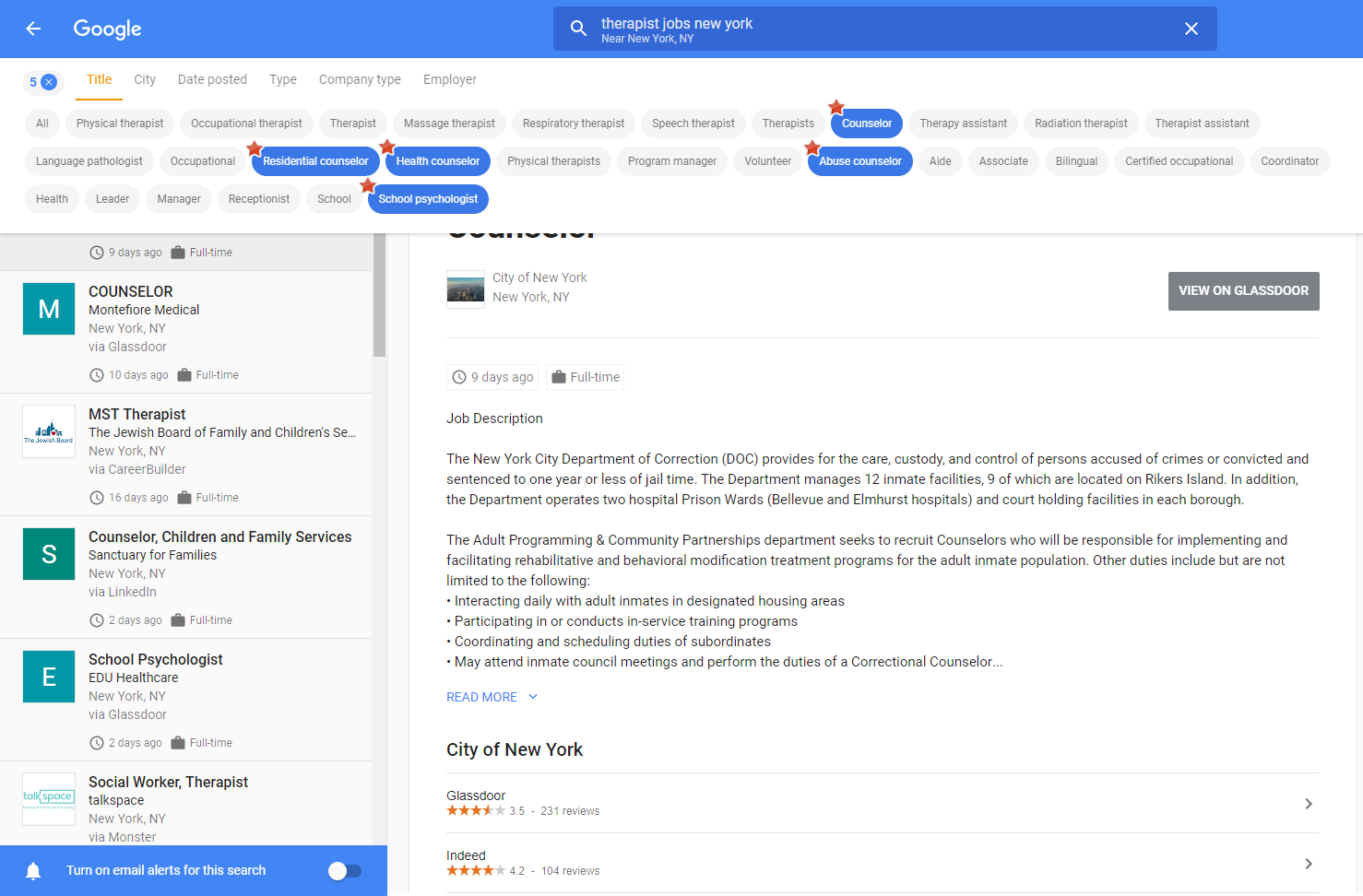 Now we should only see results related to the five job titles indicated above, which should narrow the prospects down considerably.

Job title specification may not be enough, not in a job market like New York. To ensure you don't have a three hour commute in the morning, let's filter our results by a more specific location and search outside New York per se and hop over the river to Jersey: 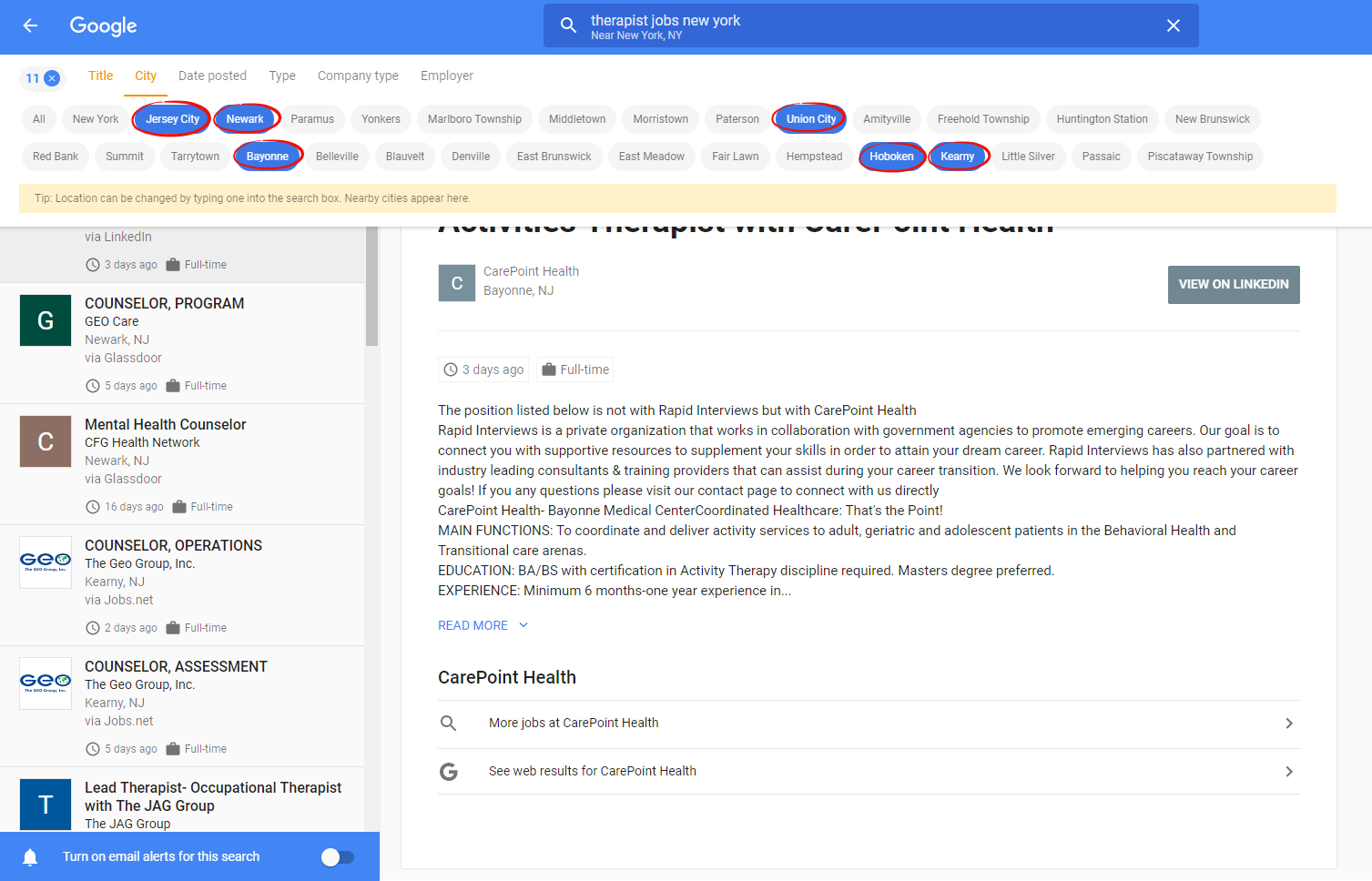 Moving right along, let's remove jobs that have been sitting on listing sites longer than a month, since what are the chances that they are still really available? 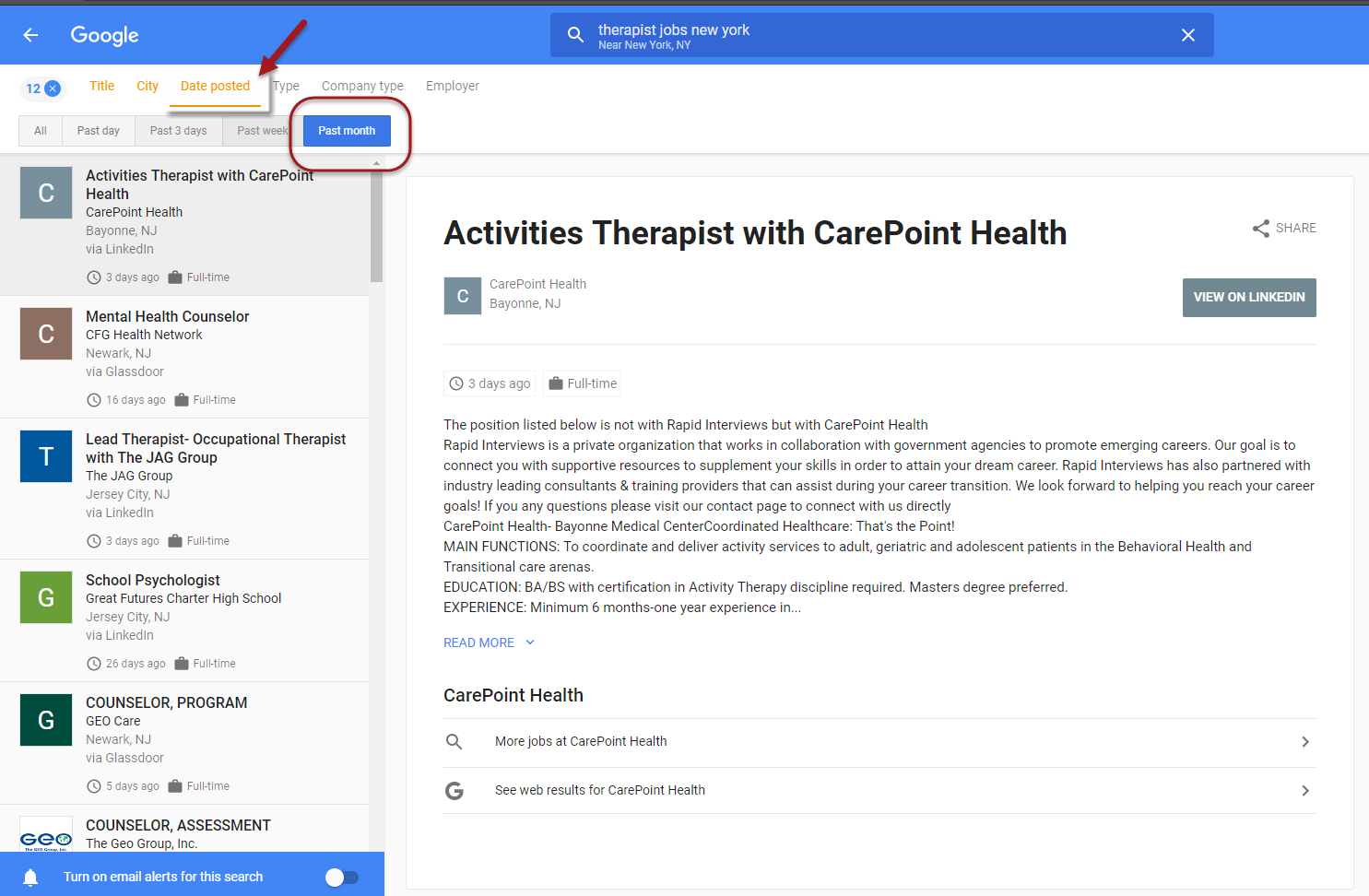 Now by type, as we're serious job hunters in need of a full-time job only: 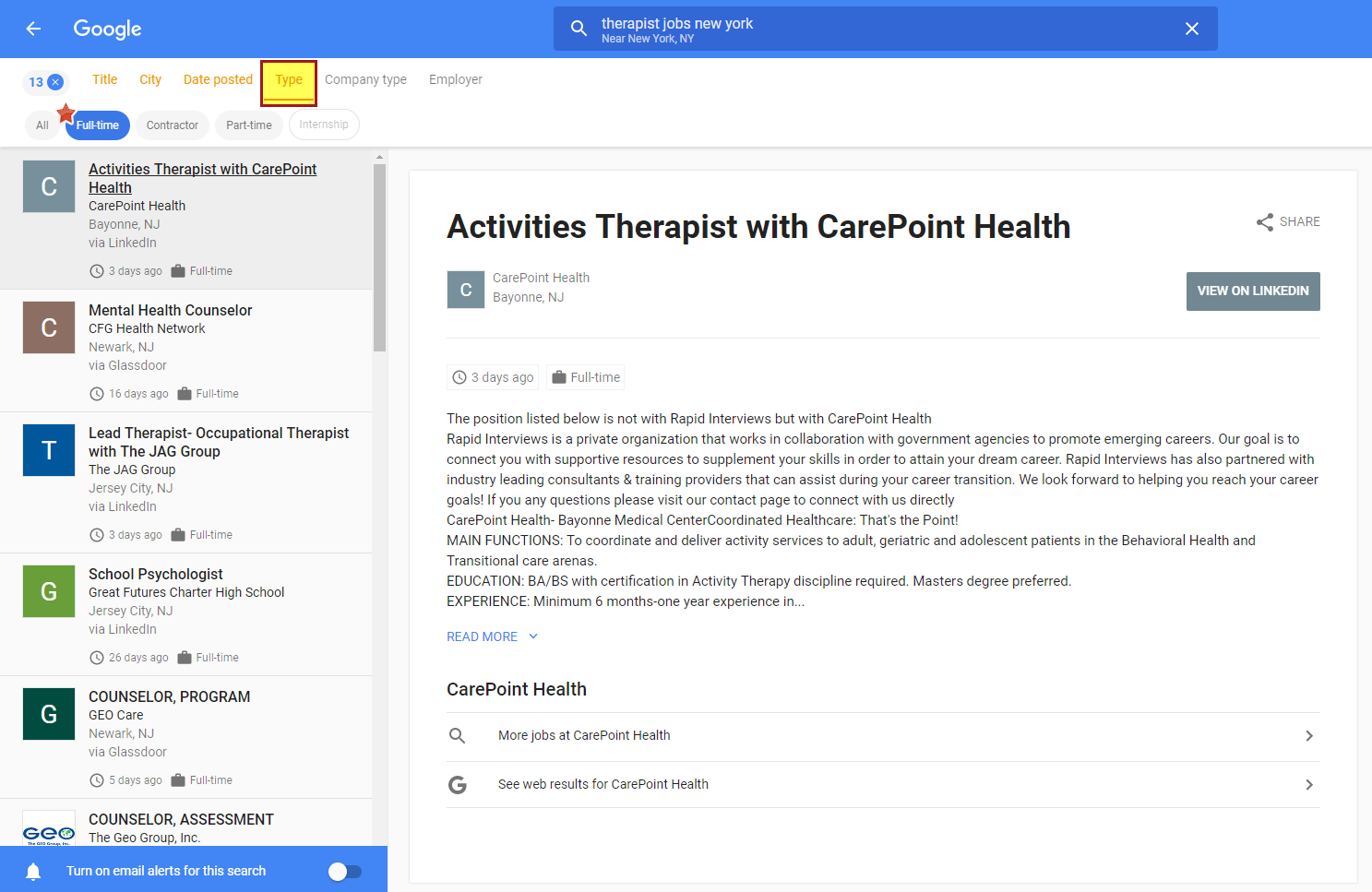 Getting closer to a fully refined search, let's tell Google what sort of company we are looking for: 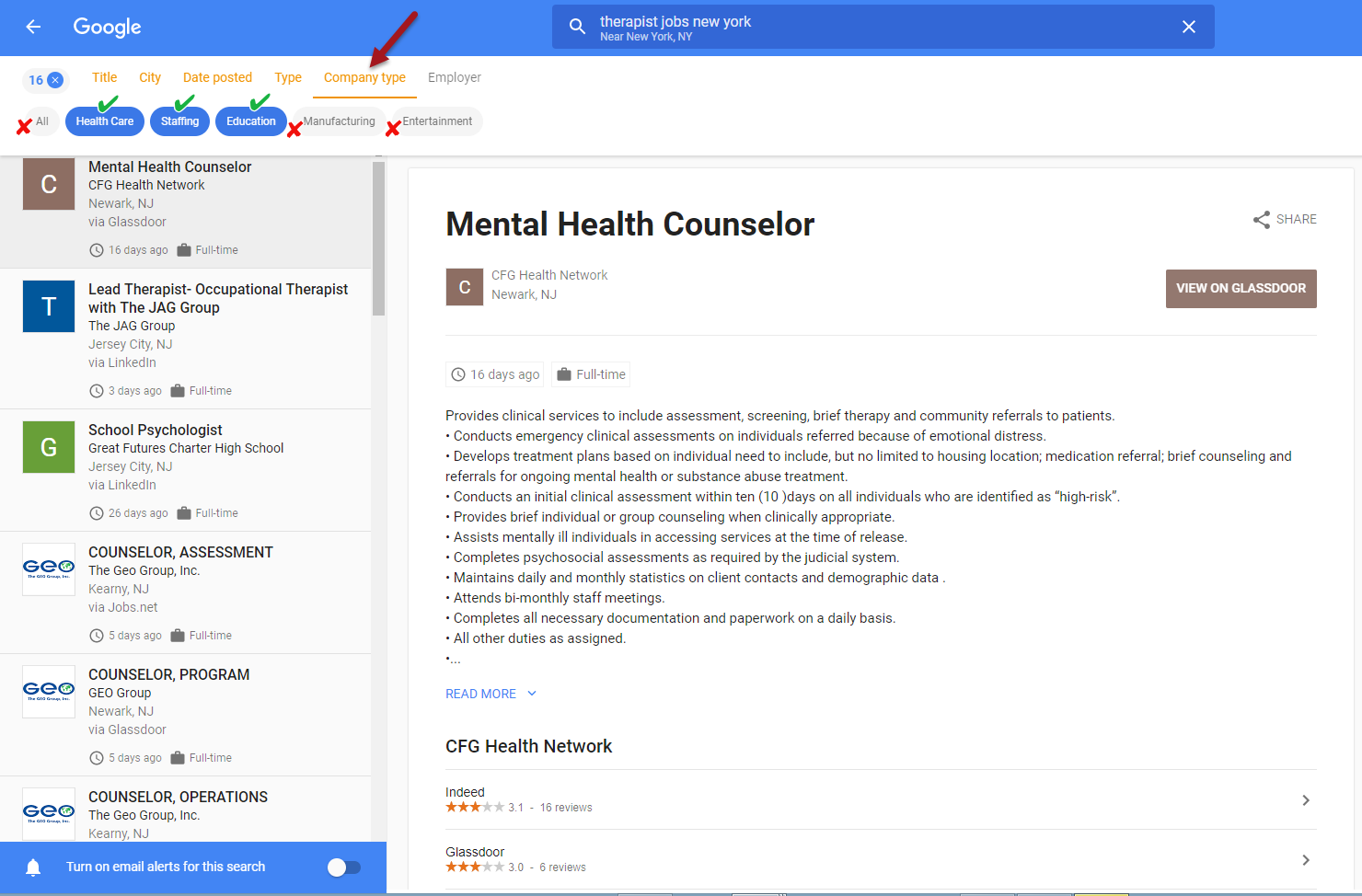 Finally, let's be a bit picky about where we want to work. In this instance let's go full altruism and look for a job at a school: 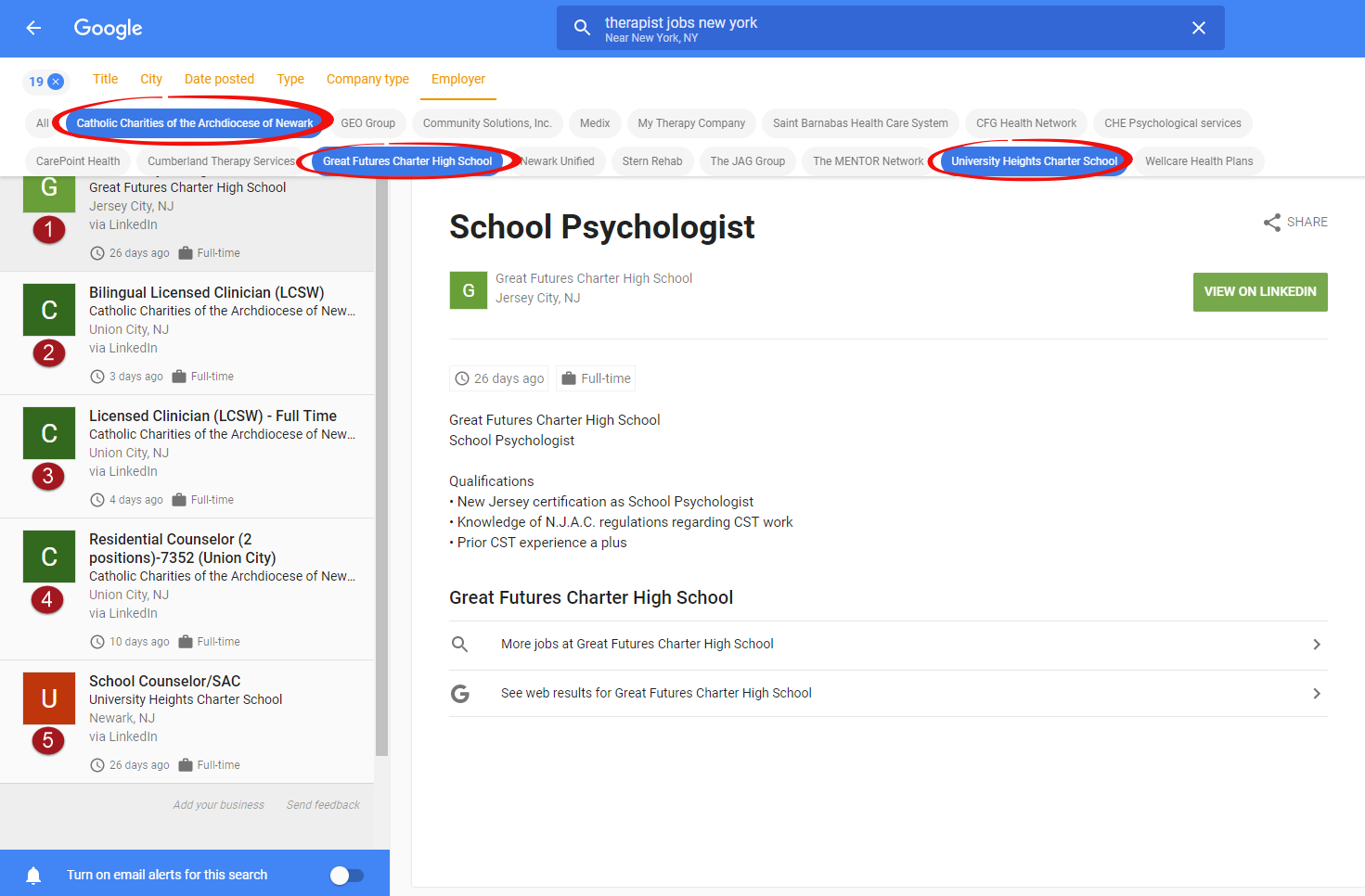 After all of that, we are left with just 5 jobs. I'll just state the obvious then, the filters within the Google for Jobs feature are extremely effective at helping users narrow the their job searches down to the most relevant listings.

There is one last item of business before we can call this Google for Jobs tour de force complete... the actual job description within the "Jobs Finder." The job descriptions Google offers are powerhouses in their own right.

Let's take a look at a job description for every 11 year old's dream job... a Zamboni driver: 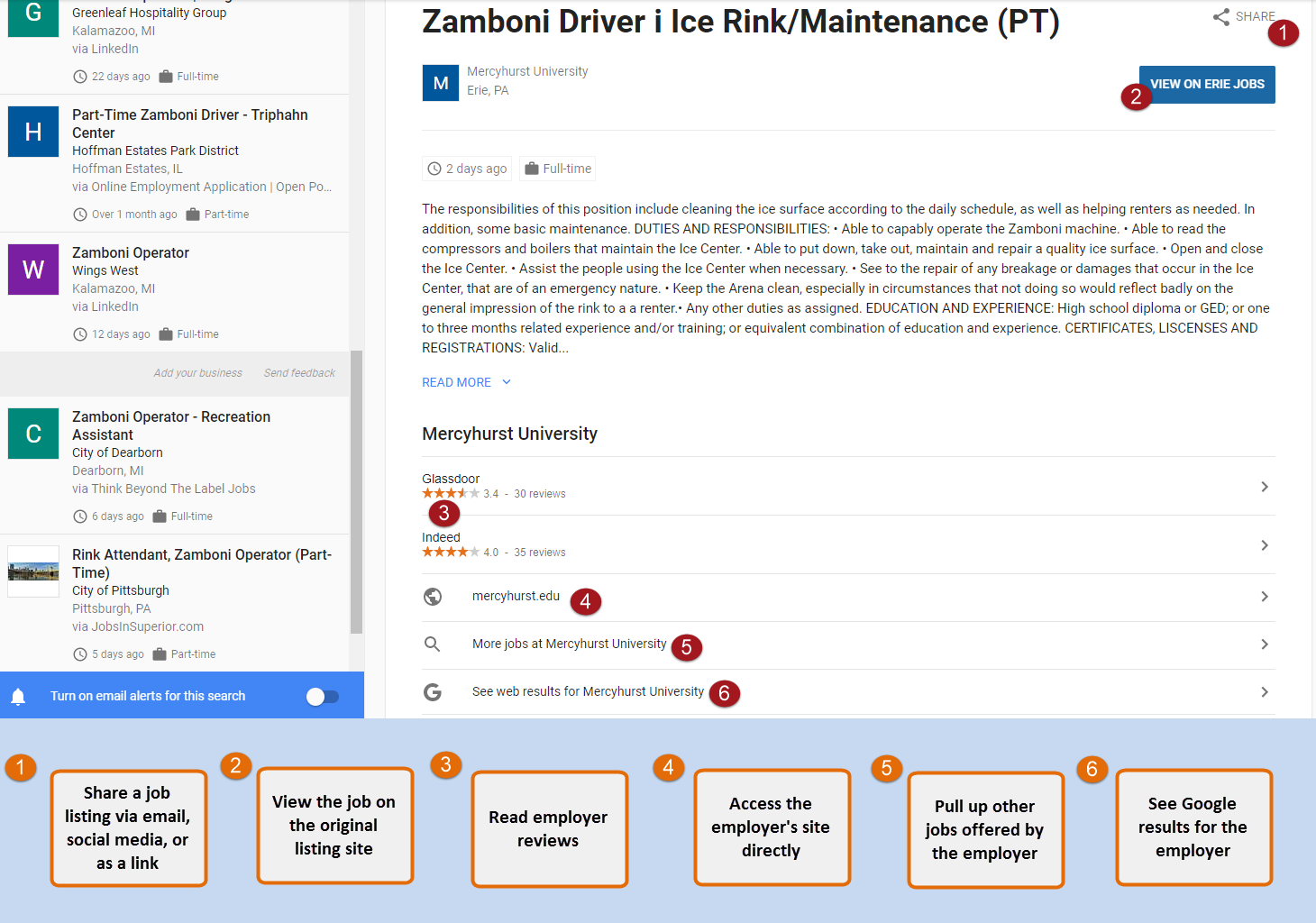 Here Google gives you the ability to:


In other instances, Google will provide a link to an online job application or even show a map of the job's location as well (see below), etc. Not too shabby. 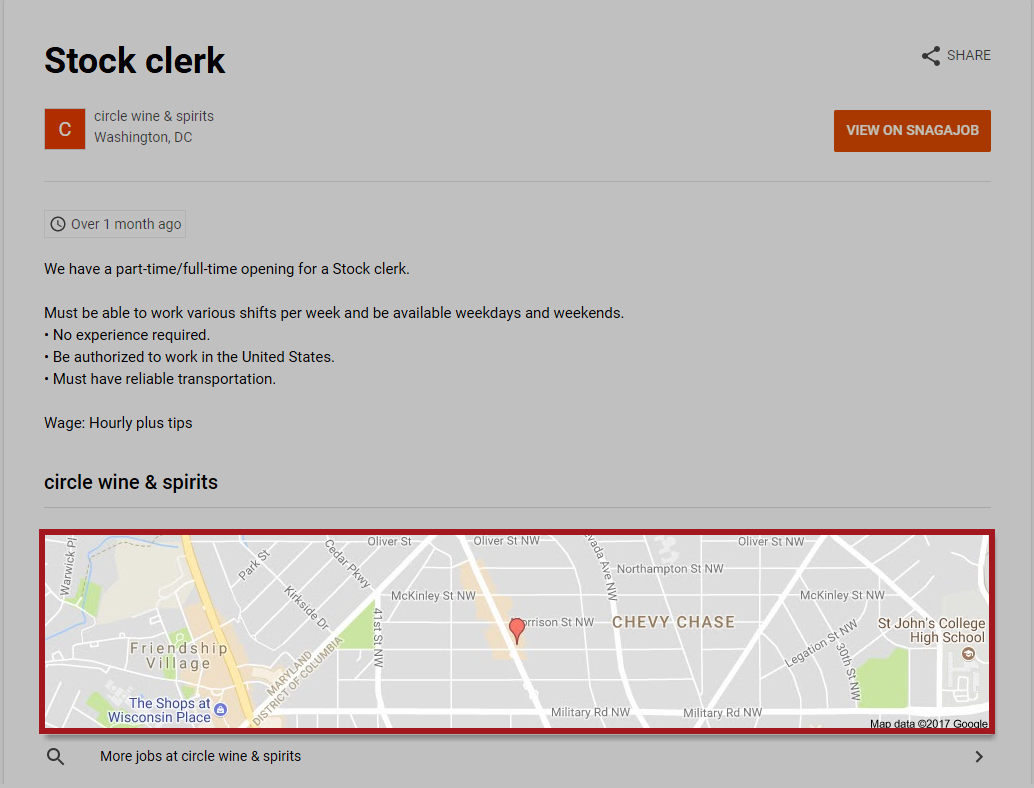 Why the Jobs Feature Works for Google

Aside for the obvious (i.e. user experience), what does Google get out of aggregating job listings? It's not like the search engine isn't crediting the original job listing sites. Why is Google going to such lengths to collect other people's content? In other words, why does Google want you inside their jobs ecosystem, and not on the SERP? What does it stand to gain by having you deep dive for a job within its own "Google" environment?

There are a lot of factors that surely are behind Google's job showing motivations. Of course offering users a novel job search tool is a big draw. Google also has consistently displayed a desire to be seen as a content provider. All of this is true, but I speculate that motivation runs a bit deeper in this case. With the Google for Jobs feature, the search engine is poised to strike an emotional chord with its users. Sure, the job was originally posted on whatever job site, but who got you the job? Who made it available to you? Who connected the two parties? Upon using the tool and landing a job, who would most users credit their job to? Why Google of course (so who cares where the listing first appeared).

What marketing technique is better than making your users feel indebted to you? Landing a job is no small thing, and with the Google for Jobs feature, users will develop a sense of loyalty to Google that is based on a strong sense of appreciation. That's something worth creating a SERP feature for.

Google's job feature is a practical tool for anyone in the hunt for a new job. It's quick, it's efficient, it's easy, and it's super comprehensive. For users, Google for Jobs is a total win. For sites that contain job listings, it's a bit more complicated. With the prominence of the Google job feature, users are sure to favor it over organic results. This throws a bit of a monkey wrench into a sites organic traffic strategy. What's more is that ranking takes on a new context as rising up the SERP is now less consequential than rising up the Google for Jobs feature. This is a formidable feature that has the potential to shake up the job listing industry. In 50 years from now we'll all hopefully be sitting in rocking chairs, whittling wood, and reflecting on how online job hunting has progressed thanks to Google.