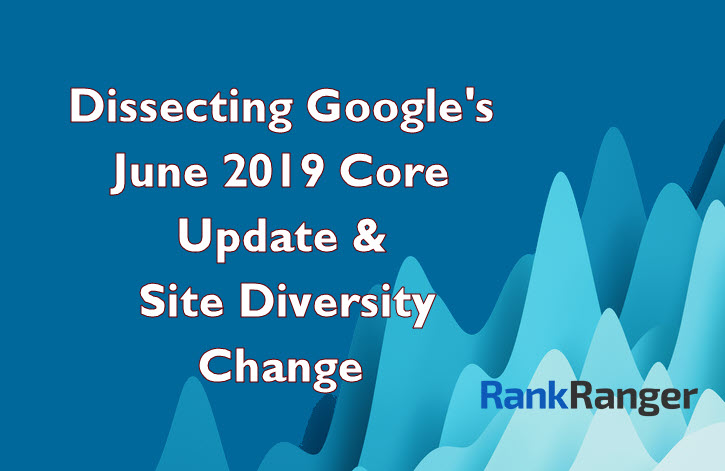 On June 4th, 2019, Google released its second official broad core algorithm of 2019 (which was appropriately dubbed the June 2019 Core Update). At the same time, and further complicating the ranking picture, Google made a significant change to the top of the SERP by increasing domain diversity. Combined, the two "changes" created quite the substantial "ranking event."

With that, let's have a look to see how the June 2019 Core Update impacted rankings and how to look for signs of top-of-the-SERP domain diversity within your rankings!

There are a lot of ways to break down the impact of any Google update. You could look at all sorts of sites, compile a list of winners and losers, and so forth. For our purposes, I'm going to go into a per niche breakdown, look at the most impacted industries, and see if there is anything to glean from the data.

Of course, and as is prudent to mention, no one data analysis can fully capture the extent, breadth, or even patterns of any given algorithm. It's important to remember that any data we see is really one small part of a very large picture that is impossible to truly define. That said, here's the data I collected on five niche industries: 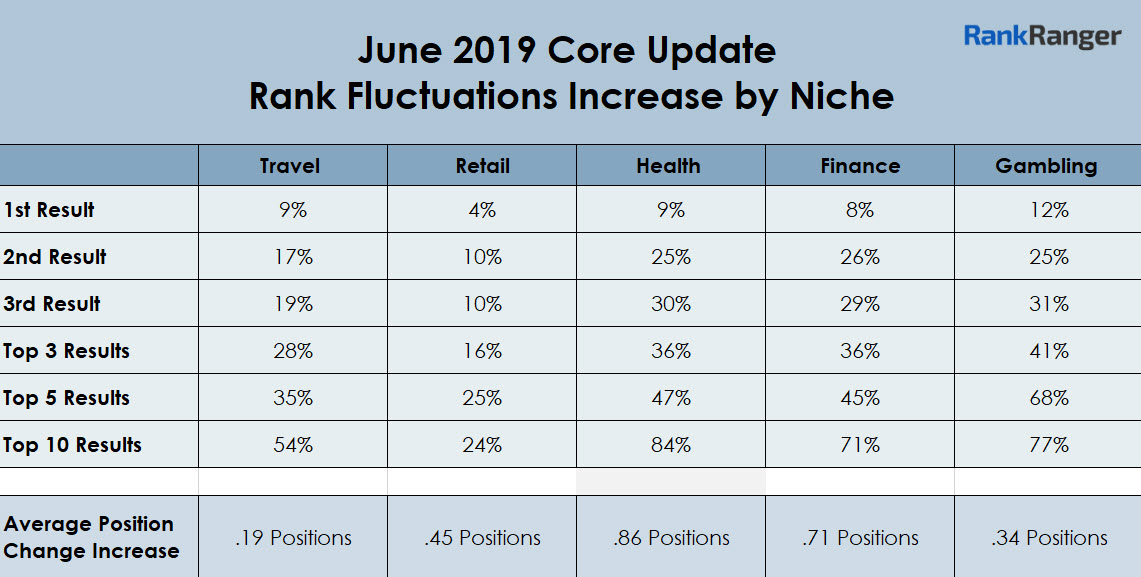 There are actually two groups of niches here, the Travel and Retail niche on the one side and the Health, Finance, and Gambling niches on the other. The reason for that is quite clear, the data clearly shows that the latter three niches were more heavily impacted by the June 2019 Core Update.

Specifically, once you move past the first ranking position there is a vivid demarcation between the level of rank fluctuations seen within each niche. For example, neither the Travel nor Retail niche showed more than a 20% rank fluctuation increase during the update. That stands in sharp contradistinction to the Health, Finance, and Gambling niches who all saw rank fluctuation increases of 25% or more during the update at the 2nd position on the SERP (which is pretty substantial being that we're talking about the 2nd position, not the 10th).

As you work your way down the SERP (i.e., when looking at the 3rd ranking position and then the top three, five, and 10 result ranges) the disparity between the niches continues. While, for example, the Travel niche showed a 54% increase in rank fluctuations in the top 10 results overall (significantly more than the Retail niche's 24%), it pales in comparison to the 84% instability increase within the Health niche.

However, looking at the fluctuations within the niches shows the June 2019 Core Update to be a more significant ranking event. That said, it is worth noting that just because Google confirms an update, does not mean it is any more potent than an unconfirmed update. With that caveat, the increased reach of the June update was not across the board. Rather, the Travel niche seems to have been impacted to the same relative extent during both the March and June core updates. 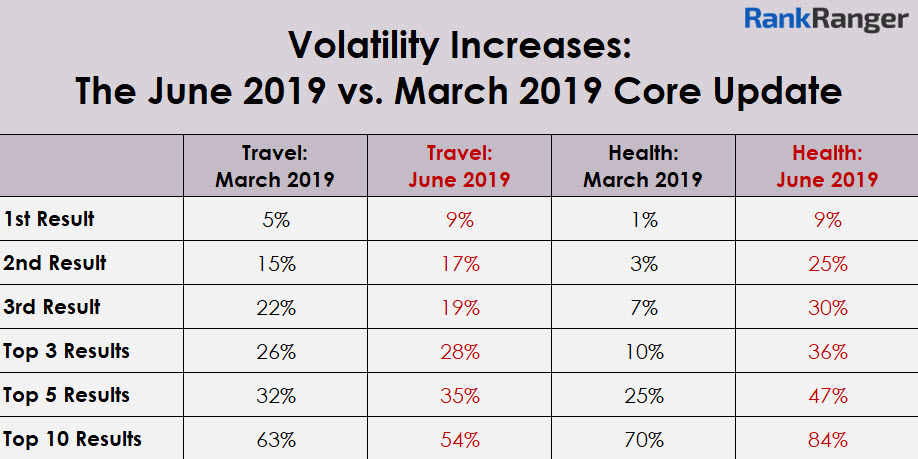 However, when you look at the Health niche the June Core Update was far more impactful than what we saw in March. This is most notably vivid at the top of the SERP as the fluctuations recorded during the June 2019 Core Update at the 1st, 2nd, and 3rd ranking positions were quite significant while those instability increases seen during the March update were what we typically see even during more minor updates.

It could then be argued that the June 2019 Core Update had a far greater tilt towards YMYL (Your Money Your Life) sites than the March update did. This does align with some of the renewed chatter about the algorithm vis-a-vis Google's quality rater guidelines. That said, I would not go so far as to say that Google was specifically targeting YMYL sites.

Of all the data shown above, the most intriguing, to me at least, is the Average Position Change metric. Google is always moving sites around. The question is to what extent? Does Google, when shifting the rankings around, move the average page up/down the SERP by one position or 100? Whatever that number is, the obvious expectation is that it increases during an update. And without fail, that is exactly what happens. For example, during the Medic Update, sites within the Health niche went from an average position change of 2.34 before the update to 4.03 during the update. Here, however, the average position change within the Health niche increased by less than a full position (.86 of a position to be exact).

This was a pattern across the board. During the Medic Update, the Gambling niche saw the average number of positions sites were moving jump by 1.31 positions. Here, during the June 2019 Core Update, that number was just .34 positions.

Now, understanding what might be behind these numbers is a bit difficult as concurrent to the June 2019 Core Update was an adjustment to site diversity at the top of the SERP. On June 6th, Google announced that they would be restricting the same domain from appearing no more than twice within the top search results (although, Google did indicate that there will be instances where this may not hold true). Google's new domain diversity hit the SERP at the same time as the June 2019 Core Update making it hard to see the full extent of either. So when we see the June update not showing a high position change average, it is possible that the data was significantly impacted by the domain diversity adjustment.


How to Find Occurrences of Domain Diversity within Your Keyword Dataset

Being that I try to be a good SEO citizen, I wanted to briefly offer some tips for finding possible instances of your pages being demoted due to Google's new domain diversity design.

Let me say right out the gate, there is more than one way to skin a cat. I'm merely using a few ranking reports from inside Rank Ranger to highlight some signs that might point to a page having been impacted by Google's renewed top-of-the-SERP diversity concerns.

I know this is simple, but it's easy to forget that the new call for domain diversity is "at the top of the SERP." Now, does that mean positions 1-5, 1-7, or even 1-10? That has not been laid out for us exactly. What is certain is that anything off page one is not part of this equation. Don't forget this when sifting through your rank data. Whether you see large shifts or on what would be page three or movement of a position or two, this is not part of the new diversity paradigm. Again, this is obvious but easy to forget.


Step 2: Look for Gaps in Your Landing Page Rankings

Let's assume you're only tracking the top 100 results, or even just the top 10 results. If you are, then looking for a gap in your landing page rankings for a specific keyword is something that could point to your page being removed from the top of the SERP for the sake of diversity.


Obviously, there could be many reasons as to why you lost rank for the page. However, seeing a consistent gap in ranking when prior to that you ranked well consistently is a red flag.


If you see that you ranked multiple pages at the top of the SERP until early June with a sudden ranking loss to all but one or two pages thereafter...  there's a decent chance domain diversity has come to haunt you.

Can Google Better Profile Your Site and the Keywords Relevant to It? 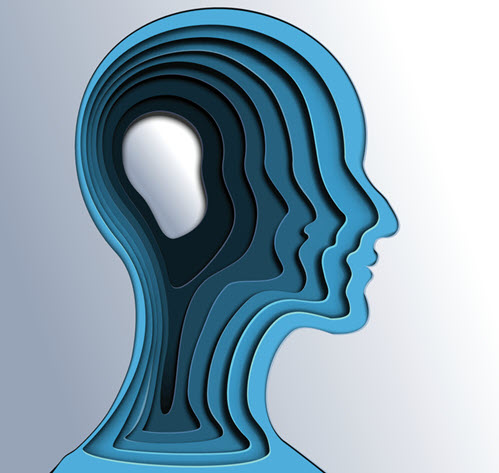 Having looked at my fair share of rankings for numerous sites and after speaking with Rank Ranger founder, Shay Harel, one theory that presents itself as a result of the June update is that Google is significantly better at knowing which keywords relate to your core profile. Meaning, it could be the case that Google has a far better grasp of knowing which keywords are actually highly relevant to your site and which slightly veer away from your site's core profile. In the case where the keyword hits on your site's profile you got a slight boost, in cases where they don't you saw a ranking demotion.

I happened to see that renowned SEO expert Gianluca Fiorelli indicated that he saw "...for core query sets, rankings are improving." Obviously, and as Gianluca noted, that is the goal of a core update. That said, there does seem to be a noticeable advancement in Google's ability to improve a site's rankings for those keywords that align to its core profile. It should be noted that these core updates seem to come with an increased ability to profile sites/pages.

Indeed, part of me wonders if the reason why the average number of positions sites changed was lower with this update is that Google has become far more nuanced in how it understands keywords in relation to a site's/page's "profile." - slightly adjusting rankings accordingly.

It's hard to know 100% with these things, but there does seem to be a pattern of Google having a better grasp of your site's "identity." In fact, some in the industry have speculated that Google now views a site as an entity.

An increased ability to align ranking boosts and demotions to a profile certainly supports this theory!