The mobile SERP is certainly richer today than it was previously as we have found Rich Cards undeclared by Google appearing in results. As you may know, we use a 500K keyword dataset in order to monitor SERP Features on desktop. What you may not know is that we also use a 100K dataset to track mobile SERP Features. As part of our daily mobile SERP foraging we came across two new forms of Rich Cards. 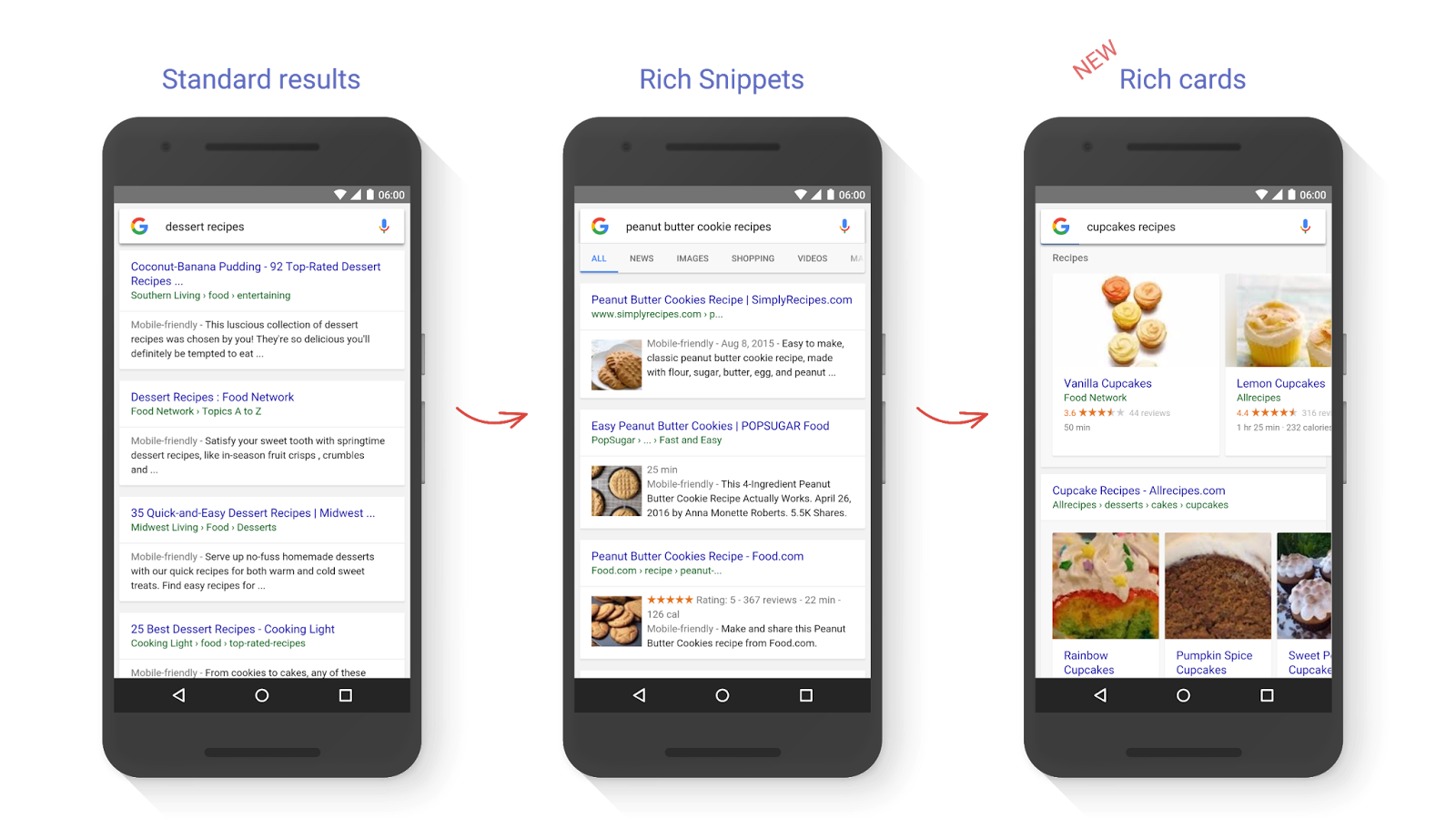 Fig 1. The evolution of Rich Cards as shown on Google Webmaster Central Blog

On May 17th Google announced the insertion of a new SERP Feature on mobile called Rich Cards. According to Google, Rich Cards are the evolution of Rich Snippets and as such (and in Google's own words) "display content in an even more engaging and visual format, with a focus on providing a better mobile user experience." In their release Google noted that Rich Cards are only currently showing for two content categories, recipes and movies.

As I mentioned, most of us have seen Rich Cards display for various recipes. Meaning to say, if you were on mobile and typed in a query related to a food or a recipe per se, the Rich Card feature would most likely appear and the heading of these Rich Cards would read Recipes. 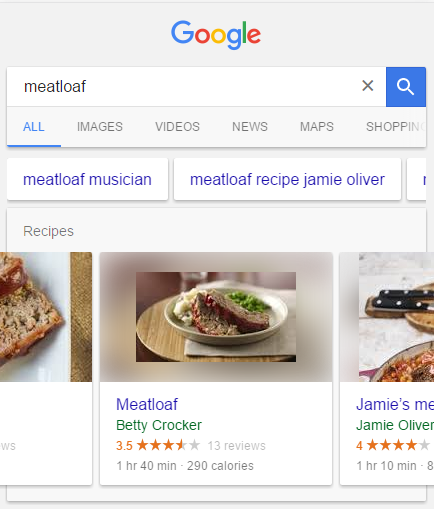 Fig 2. The Rich Card Feature displays for a recipe query and is headed by the word "Recipes."


However, when we did a search for "lychee coconut" we did see Rich Cards, but the heading was Top recipes, as opposed to just Recipes. 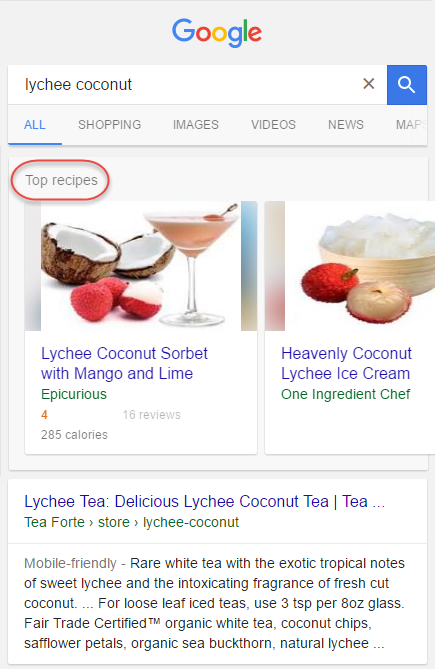 
In most ways, the contents of Rich Cards under the heading Recipes is exactly what we see here under the heading of Top recipes. Though, a closer look will show that the format for the Top recipes card is slightly different. In fact the Top recipes cards look a bit crude. You'll notice the review is lacking any star icons within the first card. The second card seems to lack a review altogether, and both show no posting time next to the caloric information.

Besides Rich Cards for Top recipes, we found the feature showing different academic course options with the heading Courses. The first form of Rich Cards displaying courses was a bit odd, it contained no images. One of the most notable aspects of a Rich Card is its image. This is especially true being that the origin of Rich Cards traces its way back to the Rich Snippet, which differentiated itself from standard results with the insertion of an image (among other qualities). Thus we found it odd when we searched for "online nursing degree programs" and saw Rich Cards absent of any image.


Rich Cards with No Image: Courses 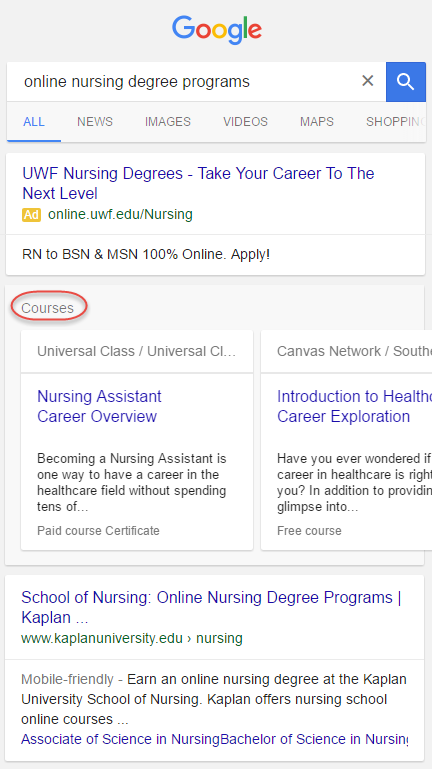 Fig 4. Rich Cards show with a heading reading "Courses," but without images within the cards


You can see in the above image that within the cards, to the right of the link, is an empty space, a space designated for a thumbnail image. In fact when we searched for "business courses courses" we also saw Rich Cards show, but this time with images. 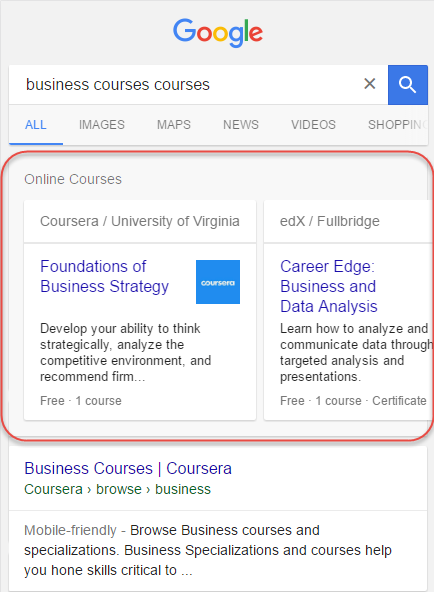 
What is intriguing to note is that the image associated with the card for Courses displays differently than those we have seen for Recipes. Here the image is not dominant, as it is with Recipes, and shows more like an Image Thumbnail would, presenting the icon of the institution/academic program. 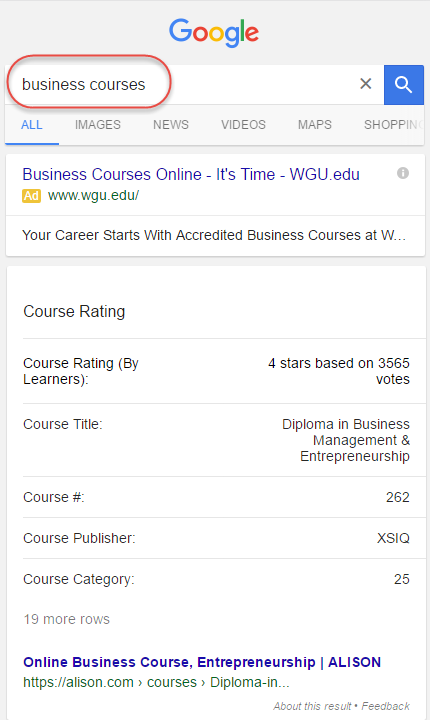 Fig 6. The more standard "business courses" query does not result in Rich Cards


The combination of this odd result, along with the "imageless" cards, makes me think that these results were some sort of hack or early form of testing of some kind, almost like a first release test still in its crude form. In fact, if you consider the unrefined form the of the Top recipe cards, lacking review and posting information, and the case for seeing this as an unrefined first testing of sorts is only bolstered.

I can only speculate, but there's a pretty good chance that Rich Cards will eventually evolve to include a variety of content categories. Keep your eyes out for any new testing that you see and of course let us know what you find along the way!

She also enjoys working with Rank Ranger's developers on ideas for new digital marketing reports and features that will make her job easier.