Facebook announced that as of February 24th 2014, they are introducing a new feature that will show Page posts tagging other brands to some fans of the brand tagged. This is a huge opportunity for brands to reach out to new audiences who are interested in their offerings.  When writing a post you should only tag relevant pages, brands and people and if they are relevant to your brand, they should also be interested in your content. Facebook says that when they tested this feature, people enjoyed seeing new and relevant content. With this new feature the post below should be seen by some fans of the App Store. 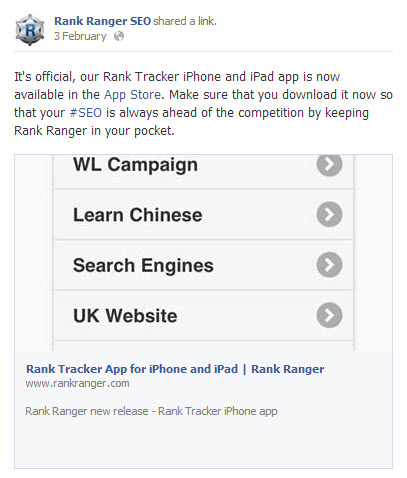 For those wondering (like us) how Facebook will stop people from taking advantage of this and simply tagging major brands with millions of fans, Facebook will be using their algorithm to check if the tags are actually relevant.
We look at many factors to make sure the most relevant stories appear in News Feed, including which posts are getting the most engagement (such as likes, comments, shares and clicks) across all of Facebook. We also consider which posts are getting the most engagement from people who like both the Page that posted and the Page that was tagged.
- Facebook