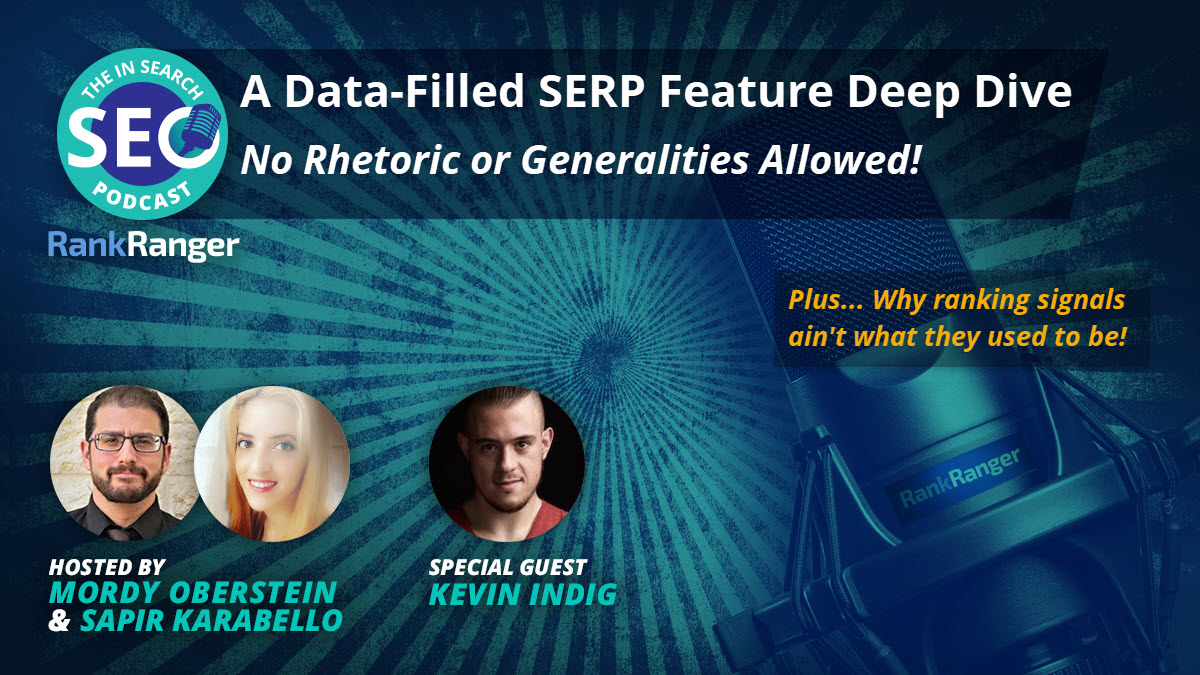 Kevin Indig is here to work your brains with a SERP feature deep dive!

Plus, we ask if the ranking signal is a thing of the past (relatively speaking)!

Google: That’s No Search Engine… That’s an Authority Engine
What is the Market Share of Featured Snippet URLs?
Improving Search for the Next 20 Years
Google Figures Out What Users Want & Like Based On Comparing Your Content To Others?
How Google Knows Good Content From Bad Content

What if we told you the idea of ranking signals as we’ve come to know them will be irrelevant. Okay, while this might be a little hyperbolic, Mordy doesn’t think Google uses ranking signals the way we think they do and they will become less relevant as time goes on.

For those who don’t know, ranking factors are these signals we believe Google uses (and that Google has said they use) to determine if a page should rank for a query. There are hundreds of them and they include things like links, HTTPS, meta tags, page speed, etc. It "works” like this. You enter a keyword, Google looks at a page and checks if it has the right links, it’s secure, it’s fast, the topic is long, the URL is right, it has an image, etc. If it checks off the boxes, Google will rank it perhaps at #5 because another page has more images or a video or better use of H2s, etc.

Take a query like ‘what is diabetes.’ Having an image of diabetes is not so important for the user intent but for the intent behind a query like ‘how to make a chocolate pie if you have diabetes,’ it would be like any other recipe page and the image would be really important. We’re not saying these ranking factors aren’t important, rather that Google looks at it all far more intrinsically.

After RankBrain, when there aren’t any universal factors but rather it’s query dependent, Google then got better at machine learning and understanding the content on the page. The issue here with the recipe page is if having an image is enough for Google to know that it’s good content or is it just a general correlation? If Google is good at understanding things intrinsically with machine learning, once Google understands the content, do you think Google needs ranking signals the same way it used to? Probably not.

This is what Google’s machine learning has been doing. Even John Mueller said that Google looks at content for a particular topic or vertical from reputable sources and it learns that this is how content should be. Then Google compares the reputable content to other content from non-super authorities and profiles them accordingly. Is that a ranking factor signal? No. So it doesn’t impact rank, right? Wrong, John Mueller said it does because of course it does.

Google is analyzing or "profiling” content in all sorts of ways to build that understanding. It’s looking at word choice and content structure to get an understanding of what you wrote and this precedes "signals.”

This doesn’t just mean understanding content per se, but to understand your intentions and motivations which then means an understanding of your authority, safety, and all that E-A-T stuff. As Google gets better and uses more machine learning it will rely less and less on "signals” as time goes on.