Some big news on the Google SERP in the month of April. The month saw some interesting SERP feature milestones that included HTTPS reaching new heights and AMP in organic results taking its first real dip. Of course, there were also a few SERP feature tests, and even a new character whose SERP personality is yet to be determined. Thus, despite the fact that Google seemed to have taken a break from major algorithm updates, we have much to talk about and talk we shall.

The big news this month was that HTTPS has leaped that tall building that is 50% of Page One results in a multitude of minute bounds over the course of an extended period of time (i.e. in a much less dramatic way than Superman, who of course likes to leap things in single bounds). Our SERP Feature tool showed that HTTPS broke the 98% mark on April 20th. Meaning, an astounding 98% of Page One SERPs contained at least one HTTPS result.


Just to give this behemoth data accomplishment some context, one year ago, only about 84% of Page One SERPs had a minimum of one HTTPS result. That's a yearly increase of 16%.


Similarly, the number of results on Page One that were HTTPS jumped from an average of 2.6 results to 4.5 during the same period. This is an enormous jump. In fact, it's about a 75% yearly increase.

Over the past year, the average number of HTTPS results on Page One increased by nearly 75%


For the record, this new HTTPS benchmark was consistent between all devices. Our Mobile SERP Features Tracker shows 97.5% of all mobile Page One SERPs have at least one HTTPS result, with an average of 4.3 HTTPS results on the page.

AMP Results Removed from the SERP in Recent Disappearing Act

Circa April 24th reports started circulating that Google was dropping the AMP logo from certain organic results. Concurrently, we had been tracking a significant AMP downtrend that constituted the first time organic AMP results displayed a substantial decrease. Between April 19th and 20th, our data indicated that organic AMP went from showing on approximately 18.5% of Page One SERPs on mobile to about 14%. 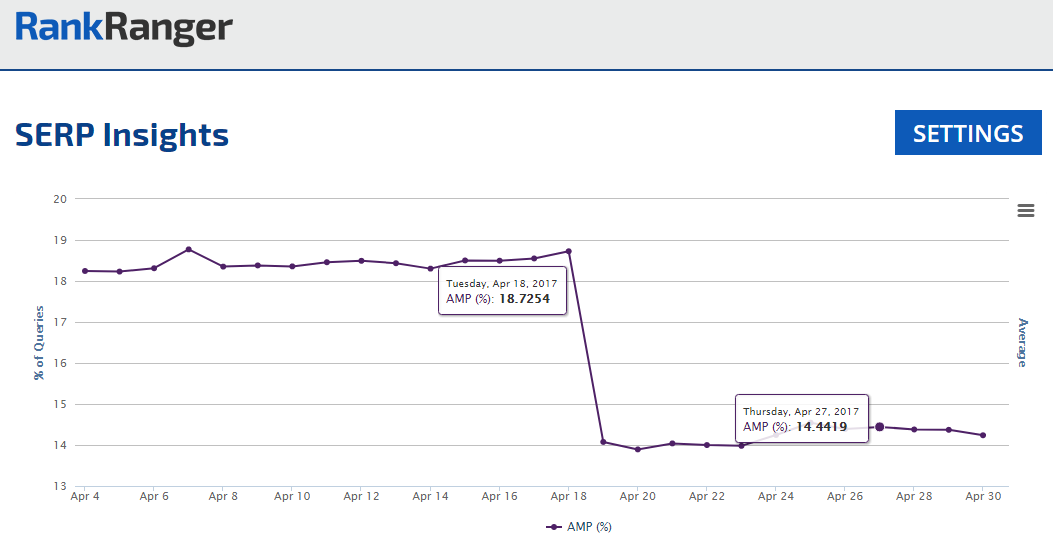 
Considering for a moment that since its organic roll-out in September 2016 AMP hadn't really dipped more than 1 to 1.5 percentage points, this drop-off becomes all the more striking.


It should also be noted that AMP within Google's News Box fell off as well, dropping roughly 20 percentage points between the 18th and 19th. 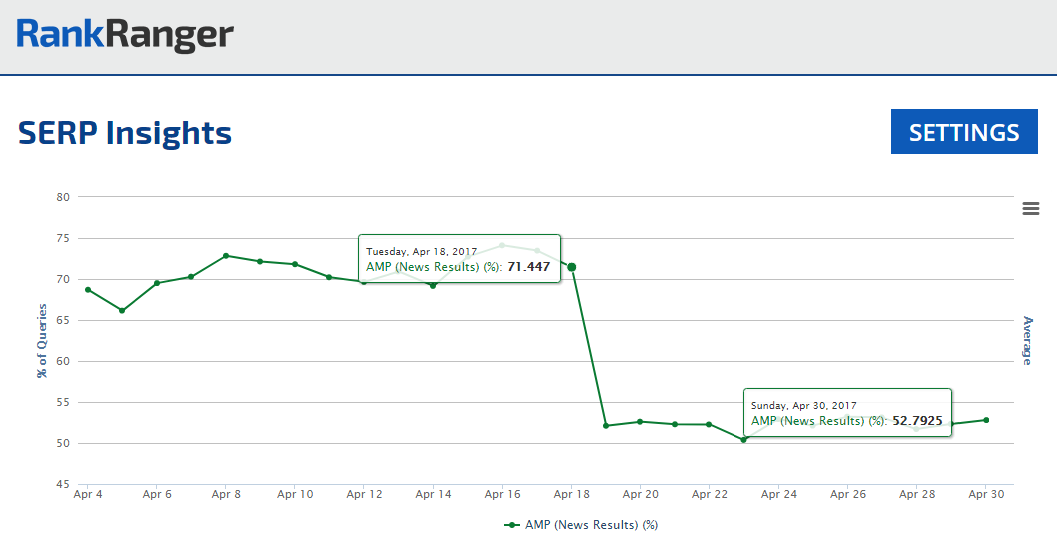 
That Google was simply removing AMP icons from organic results at the very same time that we saw AMP taking its first significant data dip seemed beyond coincidental to me, so I dug a little deeper.

I keep a SERP feature screenshot library of sorts. So back in early April I took the screenshot you see directly below, which clearly shows an organic AMP result. 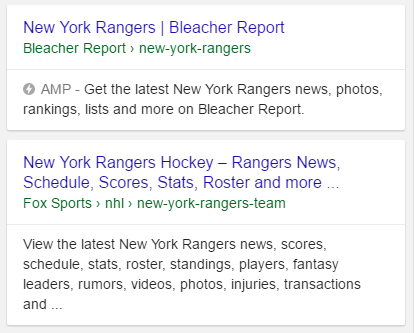 Seeing AMP undergoing a dip I brought the same result up on the SERP but three weeks later. This time, it was not AMP as evidenced by the HTML: 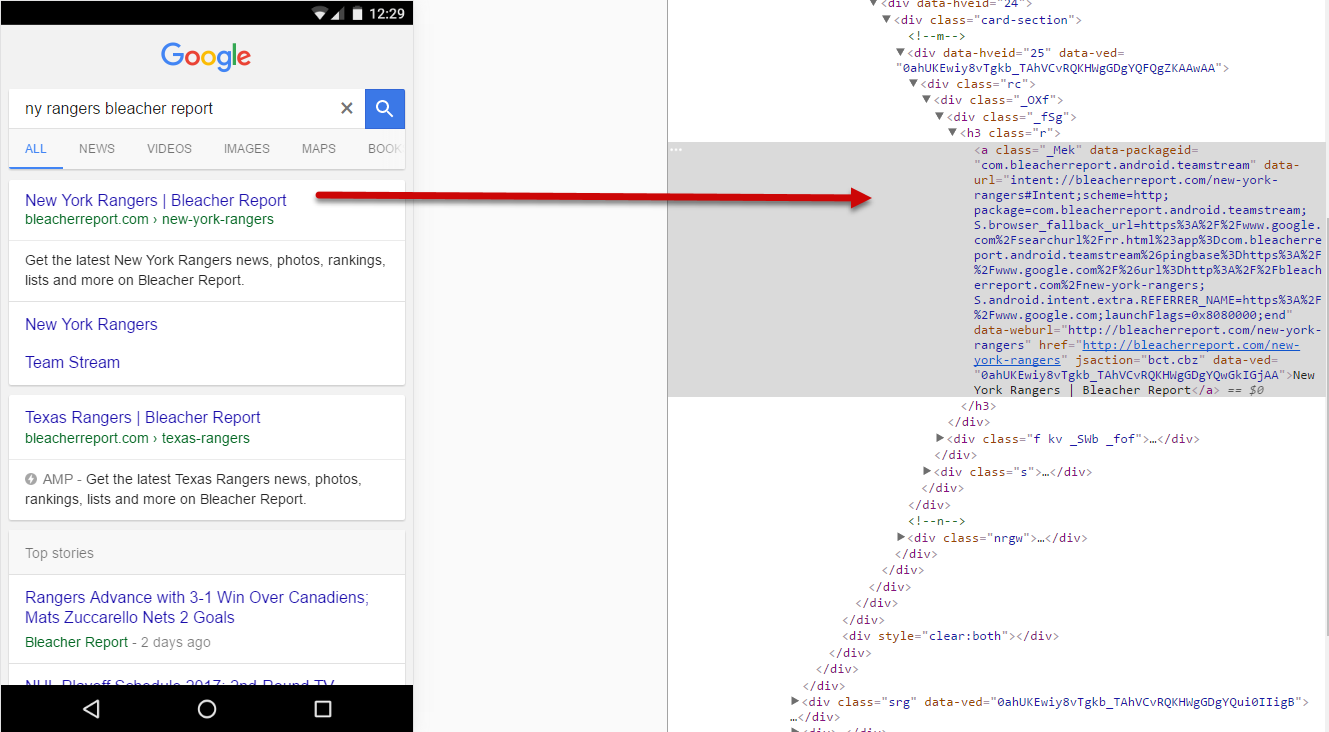 Thus, Google was/is not removing the AMP icon from organic results, they are removing the AMP page itself and replacing it with the original, non-AMP version (in certain instances of course). Which of course begs the question.... is this a bug or a test of some sorts? I personally lean away from saying it's a bug. This has been going on for over 10 days at this point. The last major SERP features bug was back in December when SiteLinks saw a sudden drop off. In that case, Google not only confirmed it was a bug (whereas here they have not), but patched things up in a matter of days.

I think this is some sort of test. Why would Google swap out the AMP version of certain pages for its non-optimized counterpart... that's a great question. It seems very odd that Google would want to diminish AMP as the search engine has only heavily promoted the format. The only hint I've seen is chatter about how AMP has been performing on the iPhone. Perhaps Google is working to resolve AMP's poor performance on the device and in doing so decided not to show certain AMP pages.

The other option I see is that Google is analyzing AMP results in some way, looking to gain insights. Why do I say that? Well, AMP for a while was sort of hovering around 14% - 15% ... which after the fall off is where the SERP feature currently stands. I don't think this is an accident. I think Google purposefully knocked AMP back to "traditional levels" in order to perform some sort of analysis....but that's just speculation as the behavior here is still quite odd no matter the proposed theory.

True to tradition, Google made a few interesting changes to its SERP features, in one instance testing a new feature altogether. What I've found is that recently, a lot of the changes are more than aesthetic, but represent something a bit more substantial. 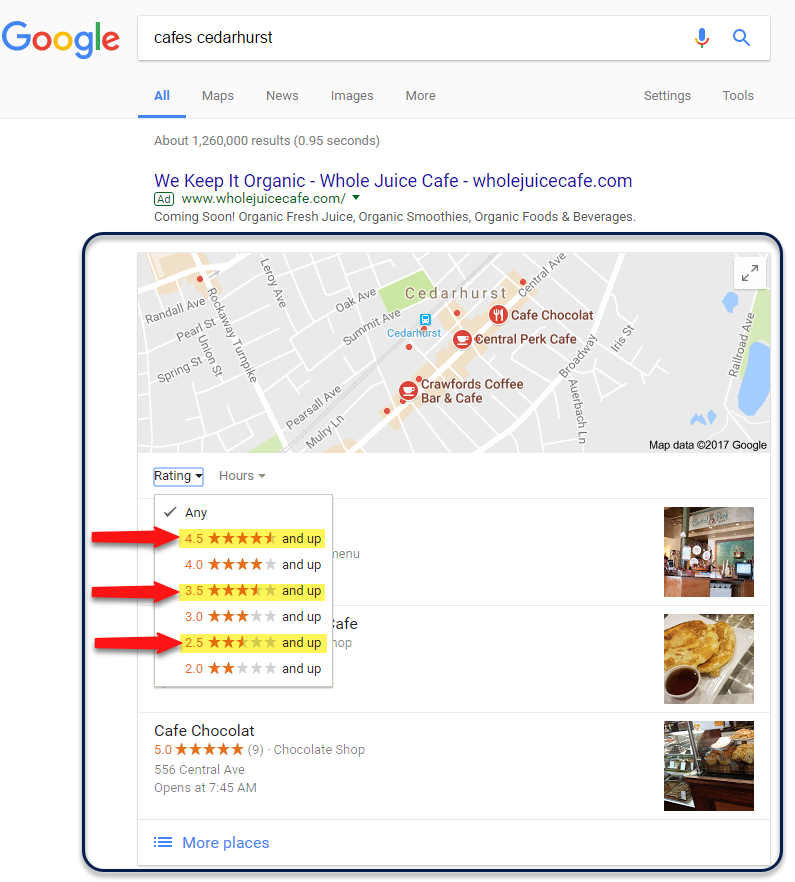 
OK, that's interesting, but beyond being fascinated by the evolution of SERP features, what's the big deal? Great question... I'm glad you asked. Interestingly enough, just as Local Packs received the more refined rating system, a report came out that Google was using the ratings to determine rank within Local Packs. If indeed Google is using the ratings to determine the order in which sites appear in a Local Pack, then this small and granular rating change goes from being interesting, to impactful.

How so? Think about it like this... say I used a company and want to leave a rating... and say I thought they were good, but not overly superb (i.e. not worth a 5 star rating)... I would give them a 4 (I'm nice like that). Say then a few weeks later I used one of their competitors for some work as well, and say I really liked them (but again not amazingly superb)... I would also give them a 4, that's the highest I could go if I didn't want to give them the ultimate 5 star rating. Now however, a company that really shines may get a 4.5 from me, whereas a a good company only a 4. If Google is using ratings as a ranking factor, this could be the difference between holding the 1 or 2 spot in a Local Pack.

Non-clickable Tags Come to the SERP in New Test

Way back in early April it appears that Google was (perhaps still is) running a test on tags within an organic result. This new "tag" feature was displaying between the URL and description and would indicate what sort of content you could expect to find. The tags, interestingly, were not clickable. Meaning, they did nothing but inform the user of what sort of topics they may expect to find. I believe this was (or is) a very limited test as I was not able to reproduce tags others had found, nor find any new ones. Nonetheless, it is interesting to see what Google is up to.

Last but not least, April saw the Local Knowledge Panel become more complete, at least on mobile. Traditionally speaking, should you search for a business' hours or address, etc., you may have seen an Answer Box offering the information. However, on mobile, quite often you will now see the hours of operation, etc. not within a separate Answer Box, but within a Local Knowledge Panel. By way of example, a desktop query related to the hours of operation of a former favorite of mine from my youth, Caffe Reggio, shows the West Village cafe's hours on top of results within a standalone box. 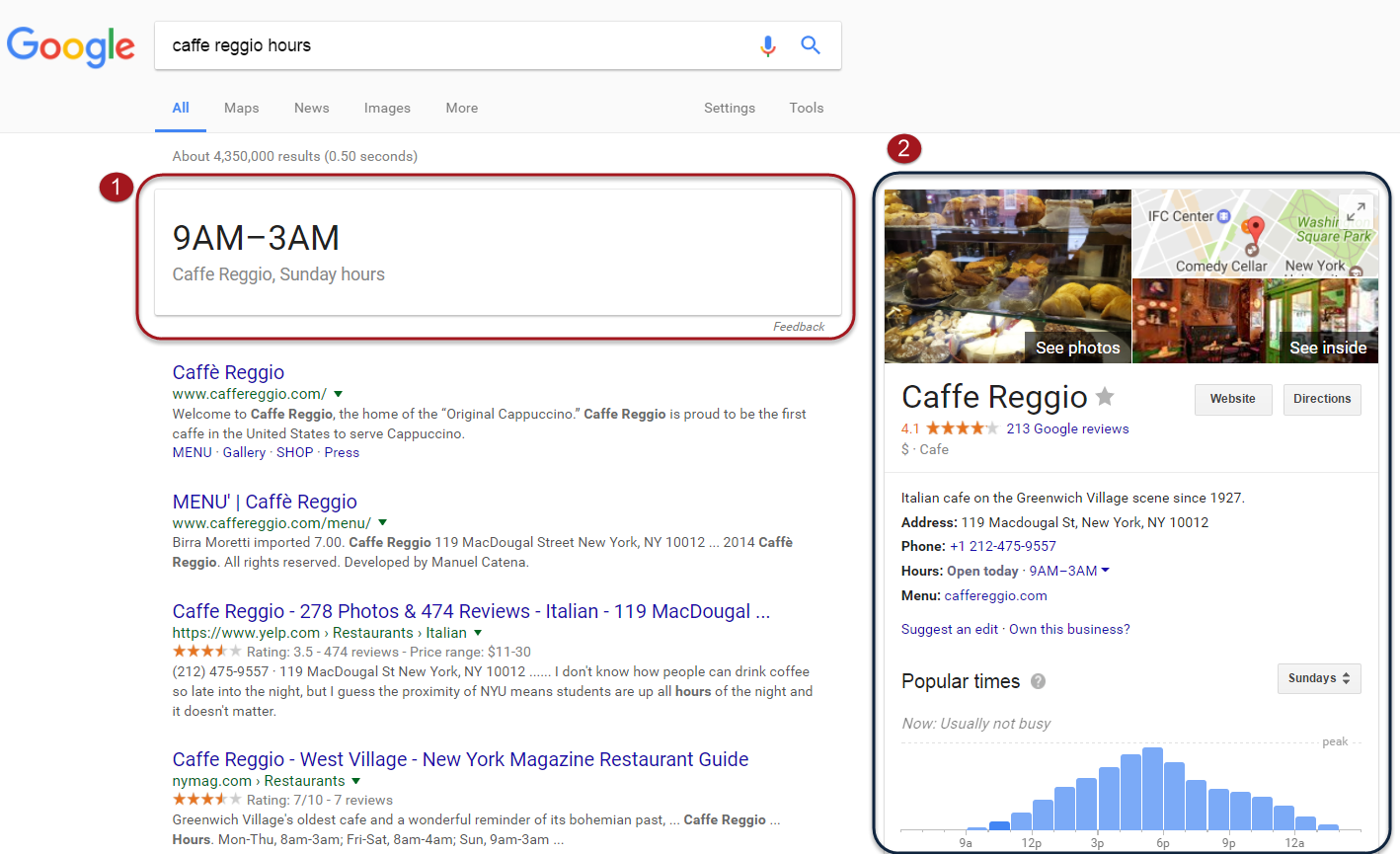 
In contradistinction, a search for the famous cafe on mobile shows the hours of operation within the Local Knowledge Panel. Which makes a lot of sense, as it helps keep the mobile SERP a bit simpler and more continuous as real estate is a bit harder to come by than on desktop (where having two SERP features doesn't crowd the page). 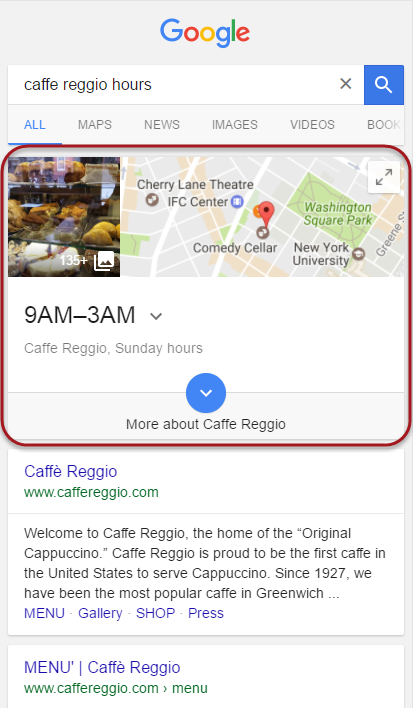 How High and How Long?

The April SERP has left me with two questions, how high and how long?! How high will HTTPS go? Can more than 98% of Page One SERPs contain at least one HTTPS result? I mean 98% is pretty high! (I personally think yes, I think you'll get pretty close to 100%). Also, how much of a majority will HTTPS have on any given Page One SERP? How far past 50% will we go?

When it comes to AMP, how long will Google's favorite child stay down? Will we see organic AMP results return to previous levels? I'd have to say yes in a big way, but how long will it take? Will we ever get a definitive answer as to why Google depreciated the lightning fast pages? Probably not... but one can always hope! Until then... tune in next month for another look at another month on the Google SERP.