August SERP Features: Out with the Old, In with the New, and Then out with New Again

August was a month with SERP news aplenty. In fact, last month had everything you could possibly want, hot summer days, the coming of the school year (a parent's best friend), and a multitude of SERP features coming and going.  At minimum it was everything a SERP Features Tracking Tool would want out of a SERP.  In any event, all of the news and happenings on the SERP last month made for quite a rich SERP experience, so without further adieu may I present to you the very much altered August 2016 SERP.

The SERP last month was like a revolving door, some features came only to leave, others seem here to stay, while others are gone for good. This is in fact what made last month so unique, as to see so many SERP  feature gains and losses is a bit unusual, it's certainly not par for the course.

Let's begin with the most recent SERP feature movement news, the removal of the Mobile-friendly label. On August 23rd Google announced that its Mobile-friendly label would be removed from the SERP. Google explained the move saying that they "recently found that 85% of all pages in the mobile search results now meet this criteria [of being mobile friendly]." and that the label's removal was part of an effort to tidy up the mobile SERP. True to their word, Rank Ranger's own Mobile SERP Features Tracker caught the disappearance of the label from the mobile SERP just as August was about to leave us.

If you're saddened by the departure of the Mobile-friendly label, take solace in knowing that your organic results will be gaining a new feature – AMP. While AMP has been limited essentially to publishers within the mobile SERP's News Box, on August 2nd, Google made public that a page's AMP status will now appear within organic results. Google has made it clear that AMP is not a ranking factor – as of now. While Google is saying that AMP per se is not a ranking factor, speed is, page speed that is. An AMP optimized page loads four times as fast as its "un-optimized" counterpart. I was never that great at math (though ironically I taught the subject, go figure), but I know enough to say that a + b = AMP indirectly impacts rank.

Google Adds Tic Tac Toe and Solitaire to the SERP

August saw Google playing games with us... literally. AMP was not the only thing Google announced would enter the SERP. On August 25th the search engine announced and indeed rolled-out the ability to play Tic Tac Toe and Solitaire right on the SERP. What am I talking about? OK, stop whatever you're doing (which is obviously reading this), go to Google and type in Tic Tac Toe and enter into 4th grade heaven once again... Now that you're back (I'm estimating a good 20 minutes later), you'll have noticed that yes, you can play Tic Tac Toe right on the results page (playtictactoe.org must be wondering why their traffic has fallen off a cliff since the 25th). 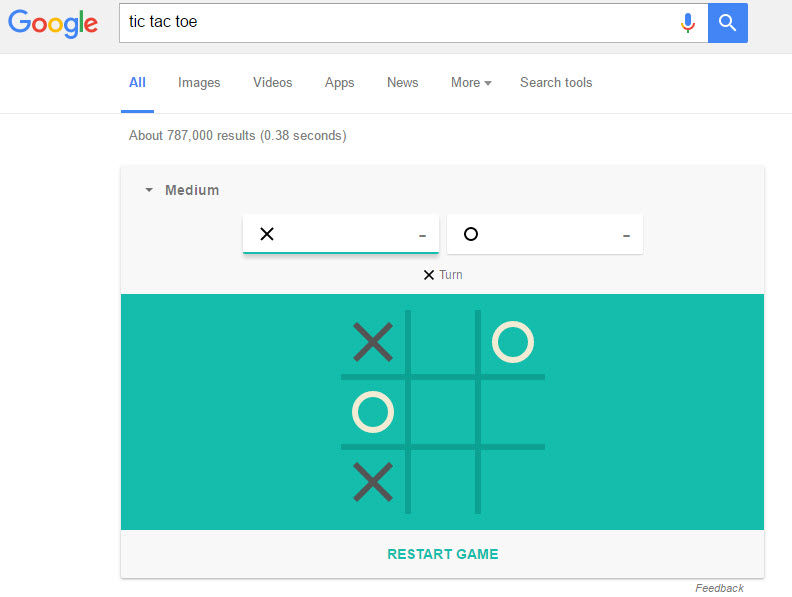 Figure 2. Google's SERP now offers the ability to play games such as Tic Tac Toe directly on the SERP


Phone Icon Moves Beyond the USA

Phone Icon, an exclusively mobile SERP feature entered a new market last month. The feature that allows you to call an establishment from within a mobile organic result via a gray phone icon was until now solely relegated to the United States. All of that changed between August 8 - 10 when the feature began to display in earnest in Canada as well (until then the feature would appear as part of a one or two day test, and even then only at the most minimal of levels).

Google went for the gold last month by introducing one of the most unique SERP features I've ever encountered. In order to help fans of the Games in Rio keep track of events, Google launched an impressive "new" Olympics SERP feature that tracked events, countries, athletes, sports, medal counts, etc. The feature was unique in that it functioned on desktop like a mobile Knowledge Panel, but with deeper information capabilities. 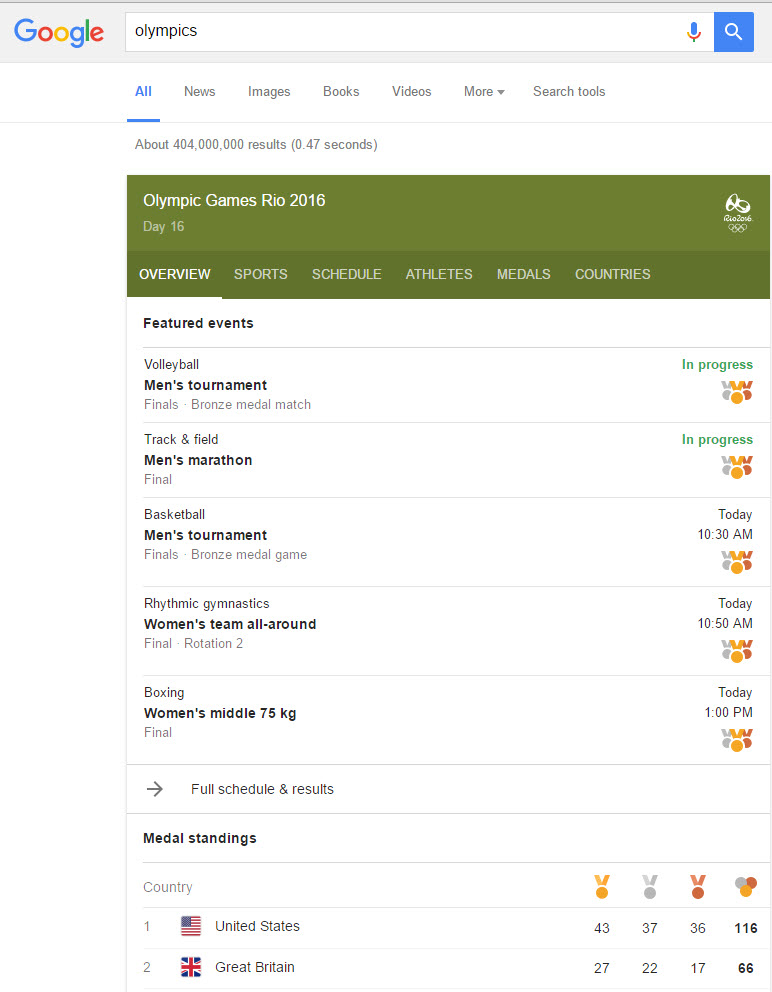 
Although the Olympics are over, the feature still appears when entering queries related to the 2016 Olympics, but does not contain live and continuously updated content. As such, we wrap up August's SERP additions and removals with the feature that was added, but removed for all intents and purposes. After all, what is an Olympic-sized SERP feature without the Olympics? I would go into more detail on the feature, as it is quite novel and presents interesting implications, but I have already discussed the feature in-depth upon its release and in the context of Knowledge Panel functionality.

With the SERP having undergone so many alterations via new and lost features it's easy to forget cold, hard SERP features data. While not as drastic as July's SERP data trends, August had its own share of SERP features data drama.

July saw some unprecedented SERP fluctuations that had some folks, myself included wondering if an undisclosed algorithm update had occurred. August, relatively speaking, was a quiet month for SERP fluctuations. Though quiet, the month did have a "fluctuation event" as the month rolled in.  In specific, the Rank Risk Index, measuring SERP fluctuations, saw an early month, multiple day, spike on both desktop and mobile. Some in the industry speculated that the fluctuations were a reversal of the "update" Google made in July. 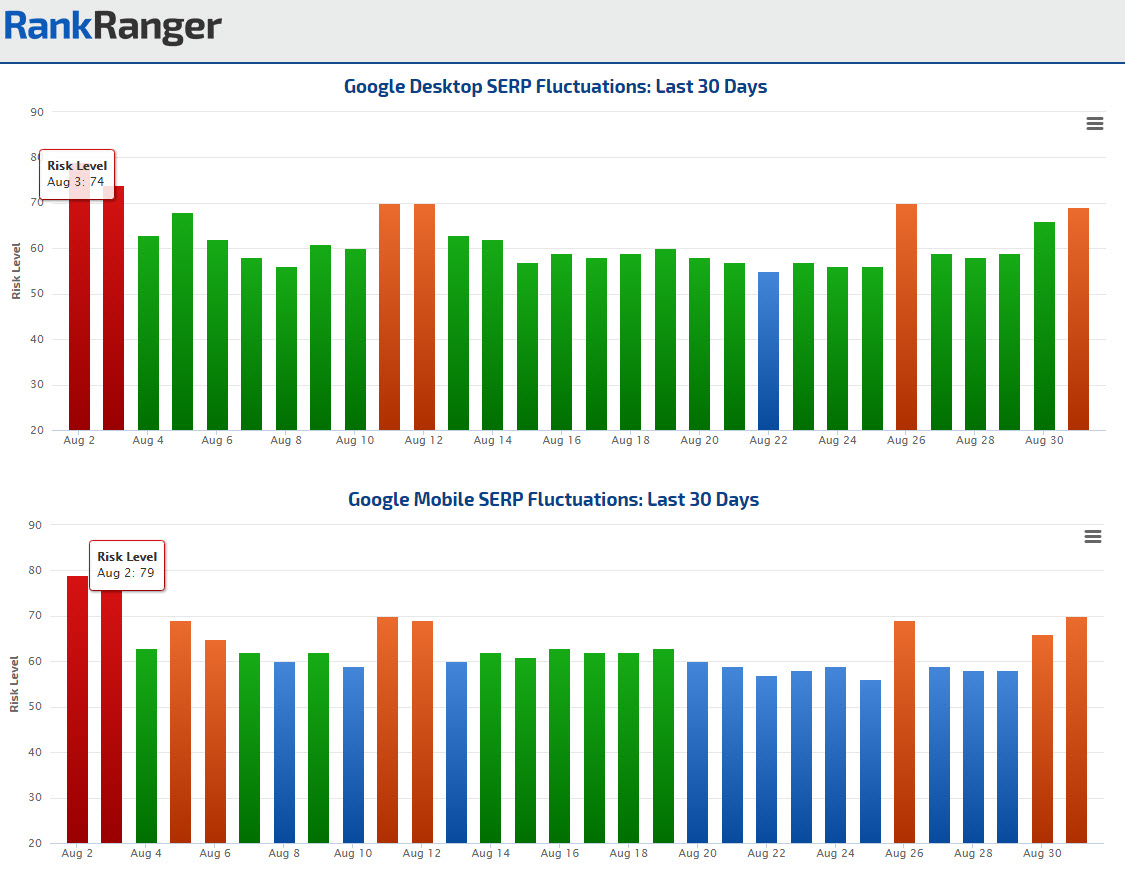 
Changes in Organic Results on Mobile

Though the fluctuations noted above seemed to be significant based on industry chatter, the SERP features themselves did not show much movement. The one noticeable exception were the number of organic results displaying on Page One of the mobile SERP.

No month would be complete without addressing at least one SERP feature data change on desktop. Though, to be honest, this one was on both desktop and mobile (it counts anyway). Starting on August 9th, the SERP Features Tool caught HTTPS taking a nice uptick, one far steeper than the feature usually sees. Between the 9th and 14th there was a solid two percentage point increase in the number of Page One results showing with at least one HTTPS site. The same held true on mobile, where the there was a roughly 2.5 percentage point increase.

Figure 7. HTTPS on both desktop and mobile show a significant uptick that began on August 9


You might say that this doesn't sound like much of an increase. Well, everything is relative and this increase had the SEO community asking Google if it boosted the ranking signal for HTTPS. As an aside, Google quickly laid the theory to rest when Gary Illyes responded with a simple "no" on Twitter.


Plenty of Changes on the SERP for Everyone

Whether you're a sports fan or just like to play cards, there was something on the August SERP for everyone. Which sporting event will Google show its deep Knowledge Panel for next? What card or childhood game will you be able to play right on the SERP next month?

On a more serious note, though your website's rankings may not have changed, with all of the organic shifts on mobile are you still on Page One? As the mobile SERP continues to show increased preference towards 7, 8, and 9 organic results how many of you ranking in position #10 in the organic results will still be listed on Page One?

As always, I look forward to hearing your insights and answers!