August made for quite the interesting month on the Google SERP. At first glance you might not think of August as being SERP spectacular. Don't be fooled however, amidst the multitude of SERP features tests and changes Google revealed a big card that gives us a nice look at what's in store for the future of Google's monetization strategy. Welcome to your ticket to the August SERP train. Hold onto your wallets because this is going to be a wild one! 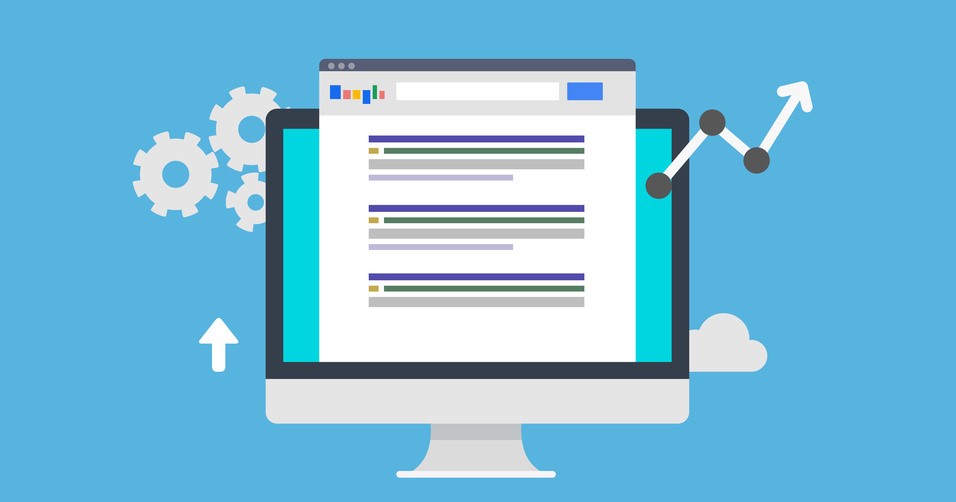 The Future of Google Monetization is Here

Let's just get right to it. This past month Google ran some tests and made some changes to its SERP features that on the surface might not seem all that extraordinary. From a functionality perspective, these feature upgrades are quite unique but not anything earth-shattering. But I'm not interested in functionality at the moment (not true, I am, I'm just trying to be dramatic). The real gem here is not some new feature (impressive as it may be), but the monetary implications that reside under the surface.

Google Flight Search Gets Its Wings

Google's Flight Box has long been helping users reach their destination (amid some controversy along the way). However, this past August Google took the feature into the hanger for a serious upgrade on mobile. The upgrade itself is exciting and appears upon clicking any of the items in the newly minted Flight Insights carousel: 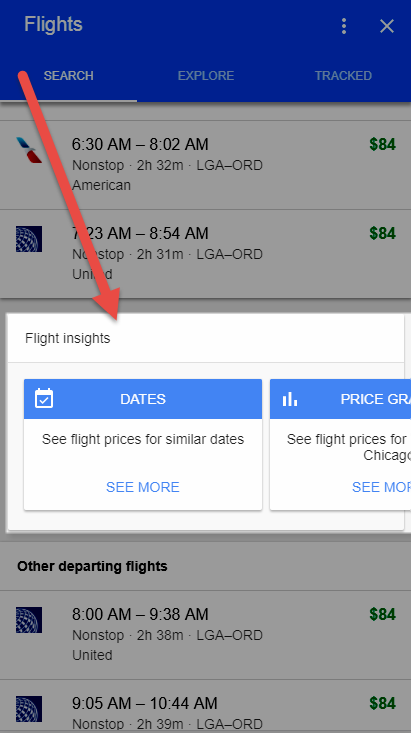 Via the carousel, you can now access a trip calendar that displays flight and return flight dates on an x and y axis that offers you the cheapest fare for each day on the calendar: 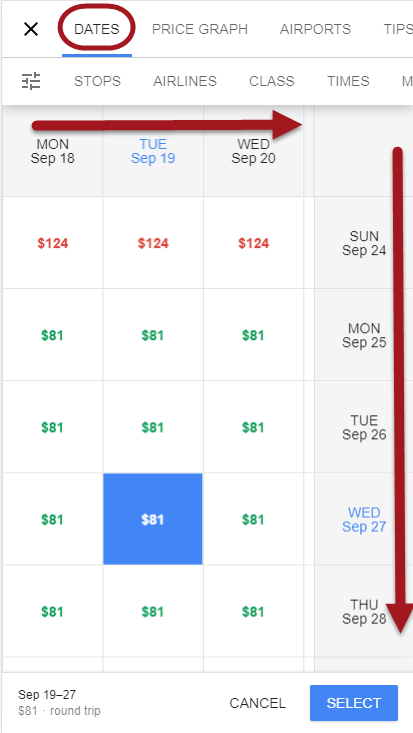 The fares shown on the calendar can of course be filtered by airline (so if you can't stand a particular carrier, you need not worry about seeing their fares): 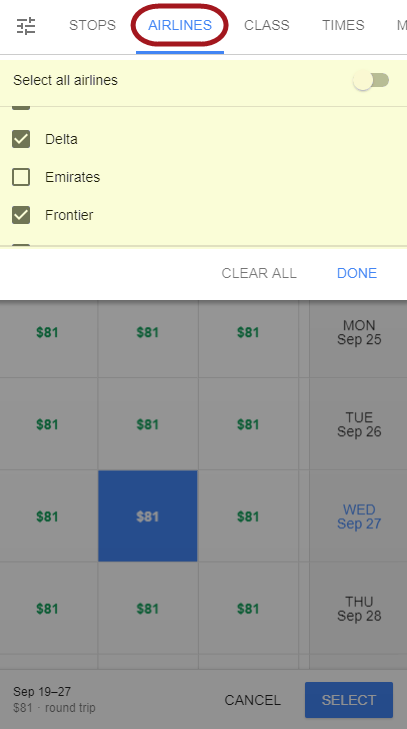 Might I add, you can also filter by the number of stops you wish to make during your journey: 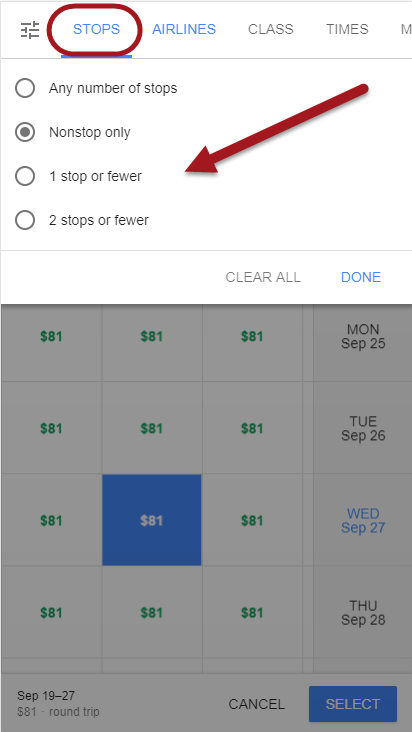 You can even choose which "class" you wish to fly: 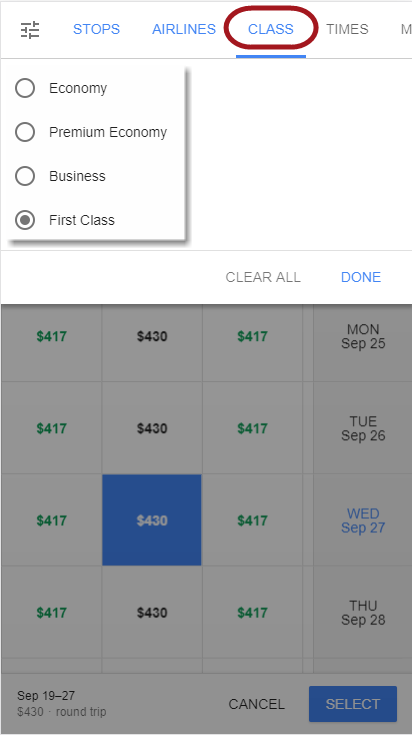 However, the coolest feature (obviously a subjective statement is going to follow) is that the feature allows you to filter flights according to the time of day you prefer to fly: 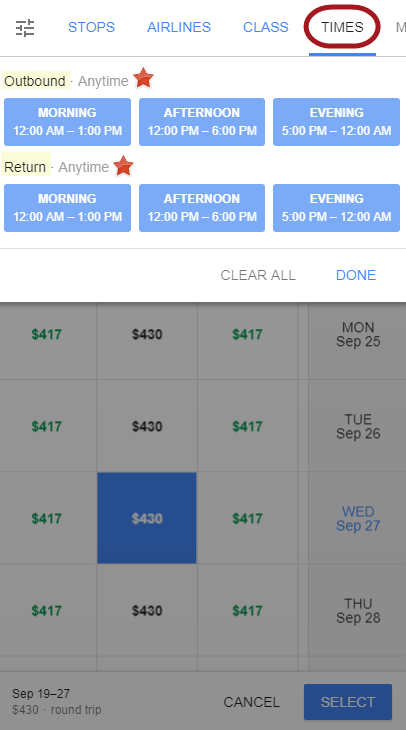 By the way, this is only one element of the new Google Flights upgrade. The new features allow you to also compare flight rates for nearby airports, scroll through a price trends graph, and even offers "flight tips" that often include a travel guide for your destination city. 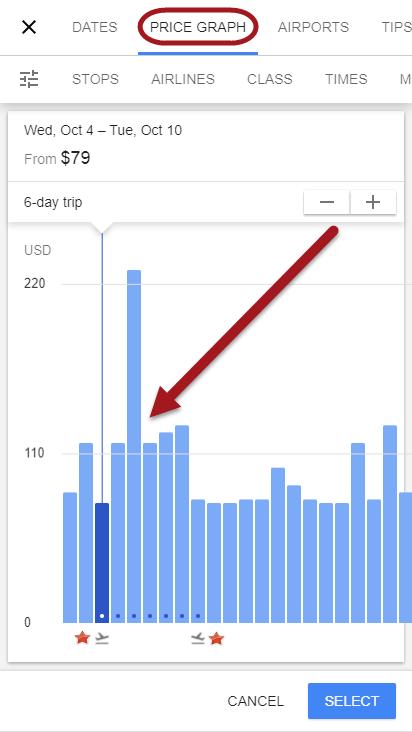 The Google Flights Box upgrade is downright amazing. However, it is crucial to remember that while Google's exact flight referral compensation details are not fully known, they do exist. Forgetting all of the issues about whether or not Google should offer such a feature or if such a feature is fair to other flight sites, Google's investment into this upgrade is quite telling. While we may think of Google's revenue strategy as being almost entirely relegated to ads, Google does not. In fact, I would be so bold as to say that subtle and veiled in-feature revenue sources are the very future of Google's monetization strategy as it's a whole new world of untapped revenue.

Concurrent with the flight search enhancements, Google released a similar upgrade for its mobile hotel searches. Like the Flight Box upgrade, hotel Local Panels are now equipped with a calendar that also indicates daily prices at the hotel: 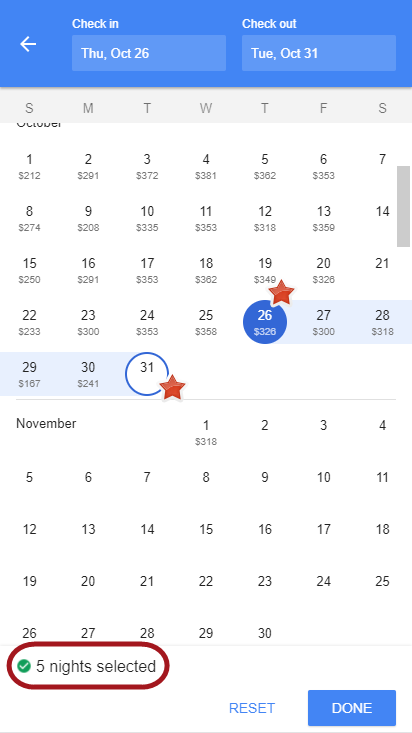 What is absolutely fascinating is that the prices listed now often include the price on the hotel’s actual site. Meaning, Google is now listing the hotel's site itself within its list of booking sites on a regular basis. I may be wrong, but this seems to be the first time that Google refers a user directly to a hotel in order to complete a specific transaction (being that this is not a domestic question the chances of me wrong are greatly reduced). In other words, Google seems to now be in the business of referring guests directly to hotels, much like it does travelers to airlines. 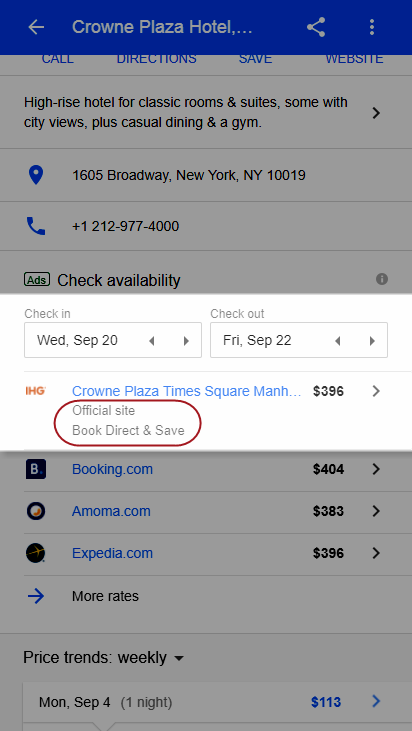 Is Google Getting Paid for Hotel Referrals?

With what seems to be a new hotel referral paradigm, Google seems to be duplicating its flight referral efforts. It's hard to imagine that each of the dozen or so hotels I saw this for are all advertising with Google. Rather, I would venture to say Google is obtaining a referral fee, much like it does via the Flight Box. I don't think this is a traditional advertising construct. The referral model makes much more sense in this context. At this point it is unclear if the referral program is still in development. While the direct referral is often offered, Google does not show the referral 100% of the time and excludes some major chains as well.

It is interesting though that unlike the Flight Box, Google does not explicitly disclose that it may obtain a referral fee. That is not say Google is trying to pull a fast one. You'll notice that the referral exists within a section of the panel that contains the Google ad label. Thus, Google is being upfront that this is not an organic element, but is holding back as to the exact relationship that exists between the hotel and the search engine.

To bolster the proposition that Google sees a new in-feature world ripe with revenue, August saw a fascinating little upgrade to the Knowledge Panel. Partnering with the business management software company, Mindbody, Google allows users to book an appointment at local yoga studios. That is, within a yoga studio's Local Panel, Google has placed a "Book" option right in the panel. Thus, if you are logged into Google, you can book an appointment at a local Yoga studio right from the Knowledge Panel. 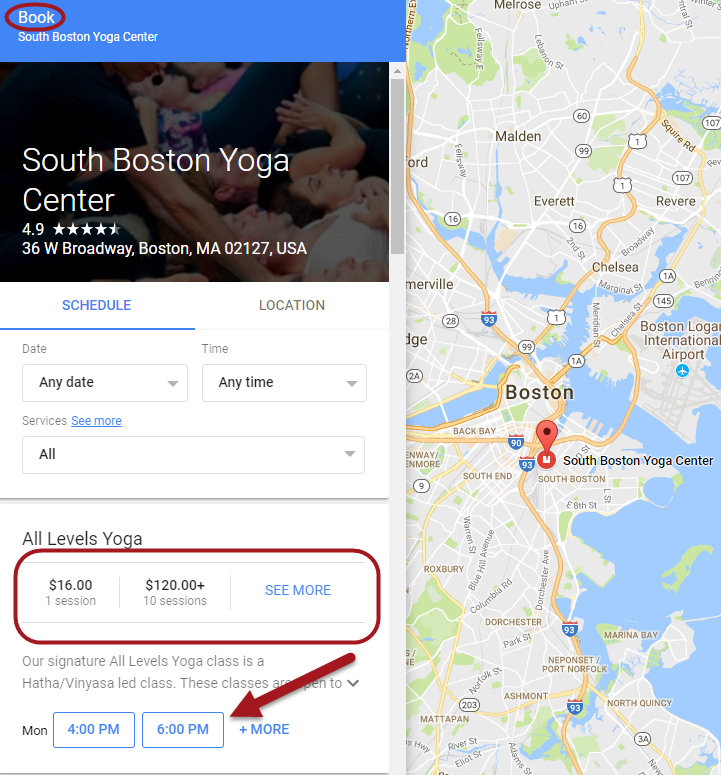 
Again, a very cool feature. I can image my yoga loving aunt in some weird position that hurts just looking at clicking on Google's new "Book" button. But let's think this one  through for a second. Isn't this another form of referral? Isn't Google again referring users to a site in the context of a business transaction? Now, I have no knowledge if Google is making money via its "Book" button as of yet. However, if Google is not drawing in a referral fee at this point, do you honestly think it will keep referring customers for free forever? Is a pattern starting to emerge? (Rhetorical question of course.)

Directs Ads on the August SERP

Along with revealing renewed zeal for the more covert forms of revenue generation, Google made a series of changes in how it goes about garnering direct ad revenue during the month of August. Google is of course constantly tweaking this process, but this past month saw increased ad activity both quantitatively as well as qualitatively.


Product Search in the Knowledge Panel 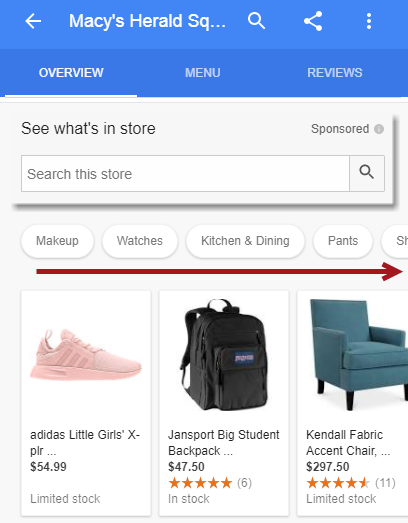 This is actually the perfect thing to transition away from the referral revenue methods discussed above to ads per se. The new See what's in store feature is not a PPC ad, nor does it appear with an ad label (though its status as sponsored content is indicated). Rather, the new feature exists within Google's Local Inventory Ads ecosystem.

August brought us a nice little upgrade to mobile SiteLinks within AdWords ads. Early in the month the SiteLinks AdWords extension was granted full mobile functionality by becoming tappable elements within a carousel. In real terms it means that users no longer have to deal with cut-off SiteLinks text. The upgrade to AdWords SiteLinks is of course natural. The carousel format not only allows for more page links, but the carousel format is consistent with Google's mobile functionality preferences. 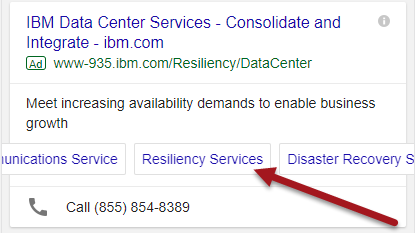 Rounding up our overview of AdWords changes in August are two tests within two of Google's most prominent SERP features, the Local Pack and Knowledge Panel.

Local Pack: Local Pack ads have always conjured up a heated debate. If Google goes with a test it ran during August, that debate may become hotter than ever. Ads in the Local Pack carry the traditional Google ad label in a prominent position. The label has traditionally be displayed right below the businesses name next to the vivid orange review stars. This past August Google ran a test that had the label pushed down a few lines with placement within the business address. The result was a very inconspicuous ad label (which is already organic green on white).

Knowledge Panel: Unlike the Local Pack, ads in Local Panels related to your friendly neighborhood local business would be a first. As the saying goes there is a first time for everything. August saw Google test the ad label in such a panel for the the first time, doubtful it will be the last.

In terms of the Knowledge Panel, Google already runs ads in panels such as those that show hotels. So while the idea of seeing ads in a Local Panel that relates to say a mom and pop store might seem odd, it really isn't. Personally, unless there is some sort of huge pushback, I expect more and more ads in the Knowledge Panel, especially on mobile.

Ad related features and ads themselves were not the only things to change on the August Google SERP. As per usual, Google rolled out a slew of changes to its SERP features last month. These changes included: 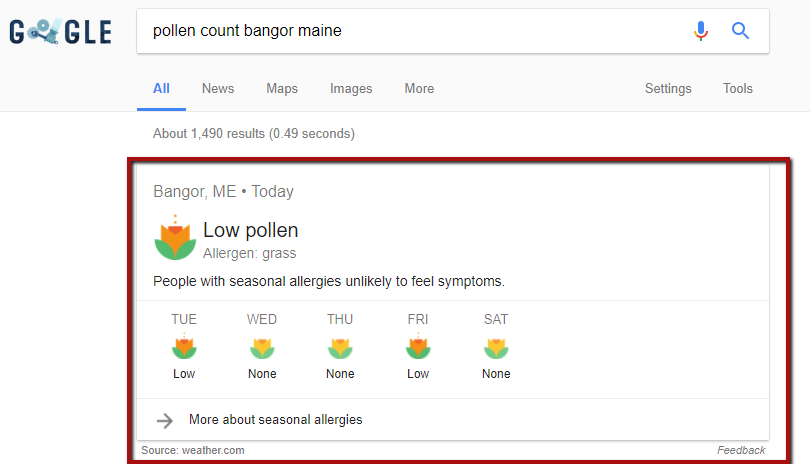 
Beyond these, there is one last SERP feature update I want to mention, Q&A in the mobile Knowledge Panel. Google has created what is essentially an FAQ section within the mobile Local Panel. Local businesses can add questions and answers, respond to user questions, and even flag incorrect information within the section. 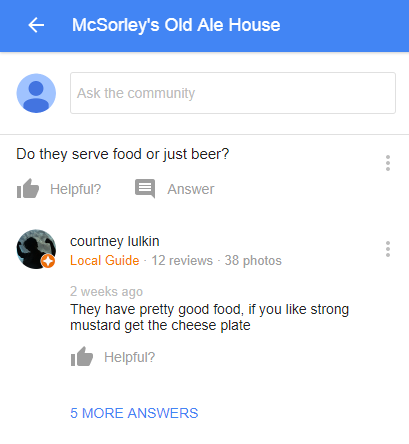 The feature is unique in a few ways. Firstly, it allows businesses to directly engage with the questions of their customers or potential customers. More than that it's another step in the evolution of the Knowledge Panel. Other than reviews, the content in the Knowledge Panel is aggregated. Meaning, it is not original content. You could find the information within a Knowledge Panel via other sources such as Wikipedia, or even a business's website. In this instance, we are talking about prominent and unique content. The content here, for the most part, is unlikely to exist anywhere else. Thus, the Local Panel is no longer ancillary to the query. Meaning, a user might specifically search for a local business on Google solely to produce the Local Panel that contains the potential answer to their question.

It wouldn't be the SERP News without a bit of Rank Ranger's unique SERP feature data. Circa mid-August our SERP Features Tool caught an increase in Local Pack that spanned numerous countries across the globe. Not relegated to a specific region (i.e. Eastern Europe), the spike most impacted Finland, Germany, Spain, South Africa, and the UK.


The percentage increases are as follows:

On the Money - Google's Path Down Revenue Road

The burning question off the August SERP is how will Google continue to expand its in-feature earnings and at what pace? Should things continue as I suspect, Google will teach us one thing; money doesn't grow on trees, it grows within SERP features. In a way, subtly earning revenue via referrals and the like may prove less controversial than doing so via ads. Let's not forget that Google subsidiary YouTube is still trying to recover from poor ad placement and that Google's upcoming Chrome ad blocker (due in October) has raised some eyebrows. Thus, as ironic and odd as it may sound, quietly earning money via referrals could be just what the doctor ordered. In any case, it just goes to show you how significant even the smallest change to Google's SERP features may be.