Google was firing on all cylinders last month. The February SERP was just brimming with new data trends and some major changes to both the SERP and the features found on it. Of course, Google threw in an algorithm update of some significance just for good measure. Join me as I explore the ins and outs of the Google SERP for the frigid month of February (unless you're in Australia and the like, where I would imagine February is quite warm). 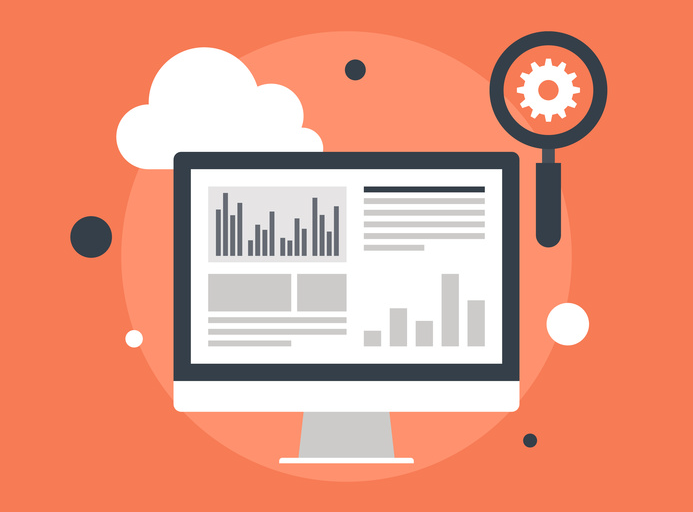 Yet Another Significant Google Update

Last month I reported that Google unleashed a 20-day update roll-out. On , the update that began on January 10th and seemingly ended on the 29th. Lo and behold, after a two-day respite, the roll-out continued, picking up on February 1st and ending on the 5th (albeit at lower rank fluctuation levels).


The mobile index further illustrated the continuity of the late January update as the platform saw one continuous roll-out that lasted through February 5th (i.e, without the two-day normalization shown on ).

There was some really fascinating data the February SERP. On the one hand, we had HTTPS soaring to new heights (which is to be expected), while on the other hand, Featured Snippets saw a significant slip (which is quite unexpected).

On February 7th we reported that Featured Snippets had undergone a substantial decrease in numerous markets, both on and on mobile. Specifically, we saw Featured Snippets shift from showing on roughly 13% of all page one SERPs to just over 10% in the US (desktop). That's about a 23% loss.

Here are some of the more notable desktop losses (as compared to the display levels shown at the end of January):


Truth be told, this data reflects what seems to be a return to the display levels of early January. Though, when compared to the data from early January, the recent trends are still a decrease in the feature's SERP presence. 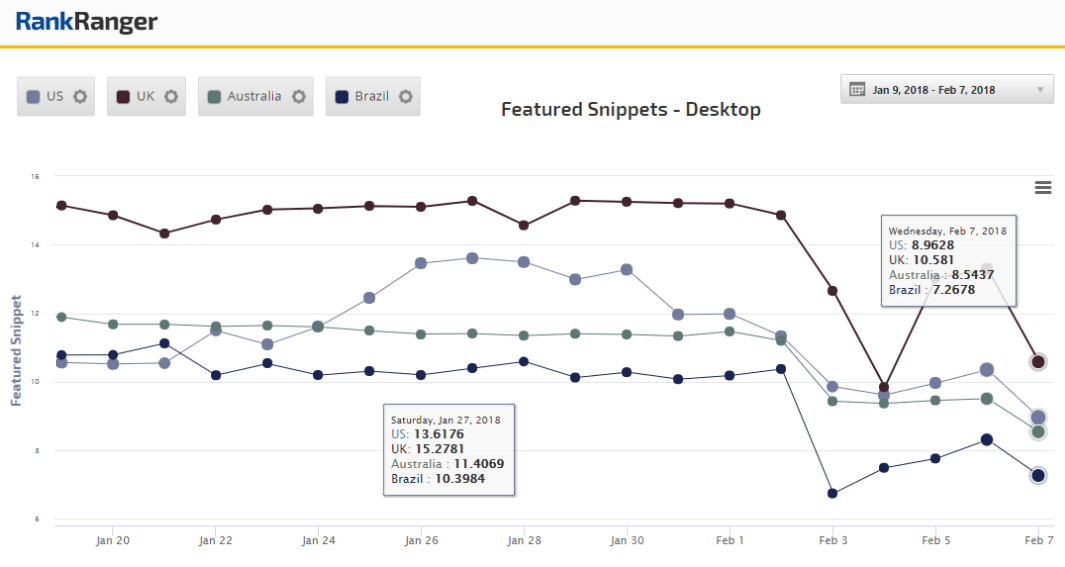 
The decline actually began on the 2nd. However, at the time, we had no way of knowing whether or not the dip was just that, a temporary dive (as opposed to a new data trend).

A similar pattern can also be seen on mobile:

Similar to , Featured Snippets on mobile underwent a decline in multiple markets


Is this a fall from Google grace? No. I would not conclude that Featured Snippets are any less significant in the eyes of Google. They certainly are still a major component of voice search and will only continue to gain prominence (in my opinion).

Google's announcement that Chrome 68 (expected July 2018) will mark all HTTP pages as "not secure," only makes HTTPS that much more important. At the time of the writing of this article, 99% of all page one SERPs contain at least one HTTPS result. However, what's perhaps more telling is that February saw the average number of HTTPS results on page jump to 7.

Meaning, 70% of all the results on page one are now HTTPS (with there being about 10 organic results on the average page, 7 out of 10 becomes 70%).


To accentuate the significance of this data, if we go back one year, only about 40% of the results on the first page of the SERP were HTTPS. This constitutes a 75% increase! With Google's aforementioned announcement, I would only think this number will climb at an even faster rate.

February was a big month for AMP. Looking back at the month, there definitely seems to have been focus on the speedy page format. With that, here's a look at what Google was up to last month in order to AMP up the mobile SERP (I know, I'm not supposed to use "AMP" that way - too bad).


AMP Stories Come to the SERP

The biggest AMP update for the month was certainly the new AMP Stories (though, AMP for Gmail is a close second in my book). What AMP Stories? Well, just think of Instagram Stories for the mobile SERP. As with the "Story" format that you may be familiar with from the wide world of social media, AMP Stories are visually orientated content that users can swipe through. 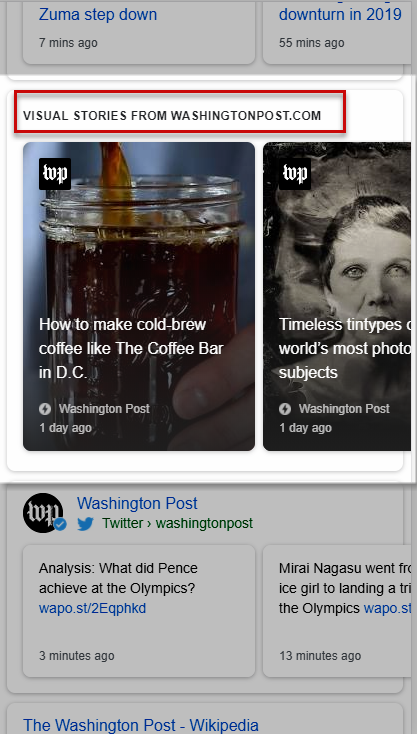 A carousel containing AMP Stories from the Washington Post

Currently, Google has partnered with select news publishers such as CNN and The Washington Post. However, the AMP Project has released a tutorial so that you can create your own AMP Story.

Early in the month of February, Google changed its image recommendations for AMP pages. Now if you want your page to show in an AMP carousel on the SERP you need to make sure your images are 1,200 pixels wide (the previous standard was 696 pixels). Thus, AMP images, at least how they appear within mobile SERP carousels, are going to be larger, and therefore more prominent. Simply, AMP page images within mobile carousels just got a visibility boost.

Some interesting AMP data became available in February as well. At the month's midway point, Google informed the world at large that 60% of AMP clicks from the SERP do not come from the Top Stories carousel. Meaning, the majority of AMP clicks, by a large number, are attributed to organic AMP results (or the carousels contained within these results). To be honest, the data is a bit unexpected. I for one would have thought that news results would dominate the "AMP click" market, especially since we are tracking organic AMP on under 25% of all page one SERPs.

There were some major changes to Google's SERP features as well as to the SERP itself in February. Also of ongoing consequence, Google's pattern of bolstering the Knowledge Panel only continued. Onwards shall we?

There was a major change to the "Image SERP" that saw a commonly used feature get cut out of the picture (OK, that was a horrible pun, I profusely apologize). The story begins with a 2016 quarrel between Getty Images and Google, with the former filing suit on the basis that Google forced its images onto the Image SERP. This dispute was recently settled by a "multi-year global licensing partnership" (as described by Getty). As part of the arrangement, the View Image button previously found within Google's Image Search has been removed. Also, Google now displays a far more visible copyright disclaimer beneath an enlarged image.


A Whole New 'People Also Search For' on Desktop

After some significant testing of multiple designs, Google has released an all new People Also Search For to the desktop SERP. There are a few things to note about this new version of the SERP Feature: 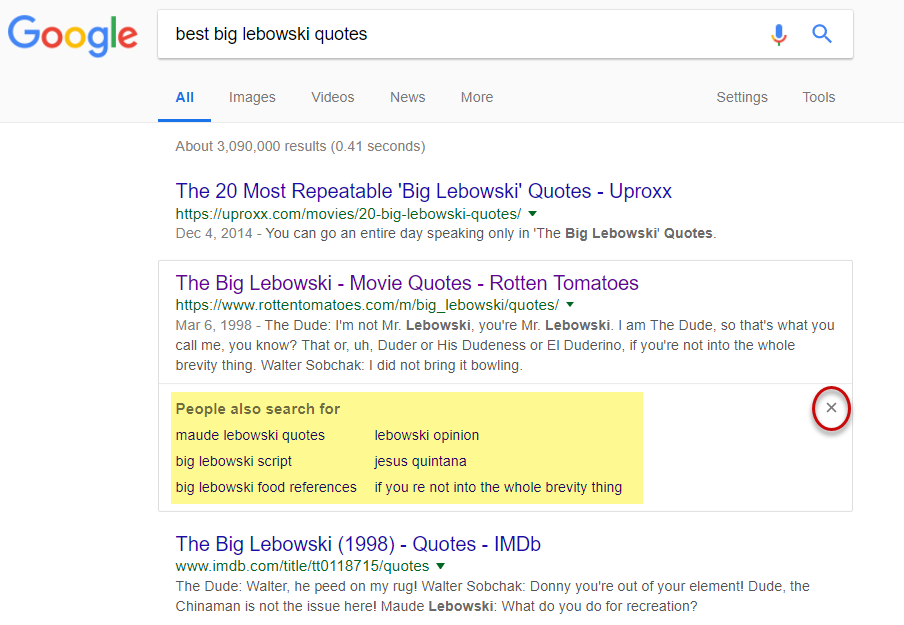 
When you dig into this a bit, there's actually a lot to chew on. For example, to what degree are the searches shown influenced by your query vs. the content on the site you visited (and they are certainly influenced by that site)? Also, does the feature negatively impact clicks/traffic to sites that appear beneath it? Meaning, when the feature appears, are users more prone to scroll down the SERP or hop to a new search via the feature, thereby bypassing the results further down the page? Is your organic power thereby limited by the feature's appearance?

Take notice of one last thing... the design of the feature. I for one am not impressed, are you? It looks relatively simple as if it belongs to 1998, not 2018. How peculiar. It's so out of place (considering Google's style sense when it comes to features like the mobile Knowledge Panel) that I'm not convinced the feature is really here to stay (at least in this format). I'm going to go out on a limb here, but after speaking with some colleagues, I'm of the opinion that Google has no intention of keeping this feature on the SERP (at least as it functions now). Rather, (I think) Google is showing these "other searches" quite prominently in order to collect user behavior data, specifically as it relates to behavior after being dissatisfied with a result (i.e., after hitting the Back button).

Not all of my analysis is spot on, but I have my moments. Way back in October (2017) Google bolstered its flight and hotel SERP features. At the time I was convinced that this "bolstering" was an indication of Google's overall revenue strategy. After a few more updates to the said features, I was all the more convinced. This past month, Google again upgraded its travel features, and with this one I have no doubt left, Google is going all-in trying to corner the market on flight and hotel referrals (ads as well, at least as hotel Knowledge Panels are concerned).

February saw Google truly reveal its hand and in a way admit that the two travel elements (flights and hotels), along with their subsequent features, are intrinsically linked (not that we did not know that by now). With the most recent changes, Google has linked flights to hotels. Now, when you search for a flight and expand the Flight Box to specify specific dates, Google is showing a new tab for... drum roll please... hotels. Meaning, you can now book a flight and hotel simultaneously on mobile, much like you can on top the travel sites such as Expedia or Travelocity. 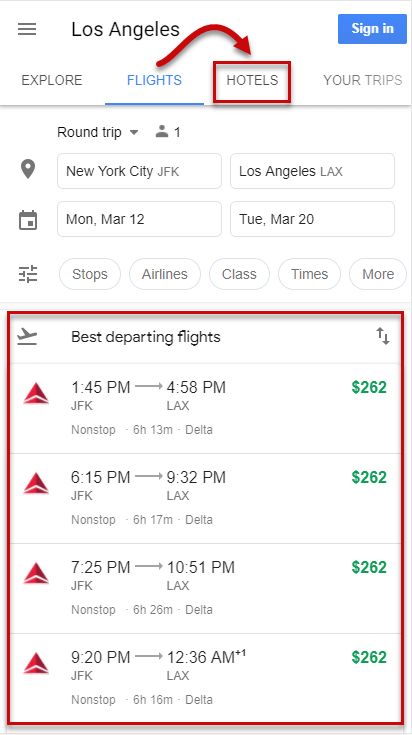 Other changes include improved pricing labels/filters and as Google says "the ability to book right from Google" - exactly!


The Booking Button Hits the Canadian SERP: For a variety of queries, and via numerous software partnerships, Google enables users in the US to book an appointment at a business via the Knowledge Panel. This past month the feature has reached America's northerly neighbor, Canada. The significance is not that one more market now has the feature, but that the feature is proliferating. In my mind, it's only a question of time before the "Booking Button" hits additional markets and is somehow monetized by Google. 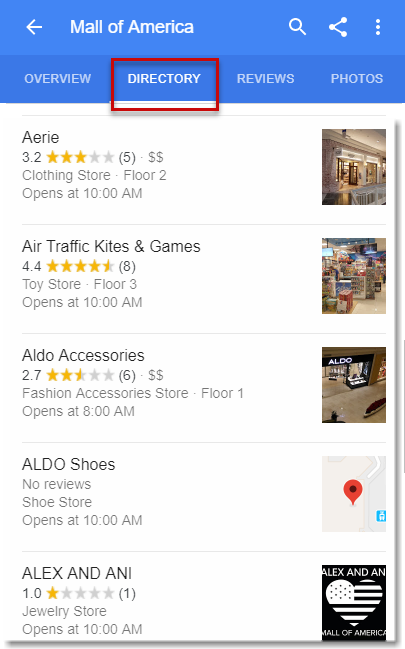 A store directory for the Mall of America, as seen within a mobile Local Knowledge Panel

Just as the month was set to close, Google snuck an entirely new feature onto the SERP. Appearing in non-US searches only, Google has begun showing what it calls the Word Coach beneath select Dictionary Boxes (mobile). Starting with words connected to the content displayed in the attached Dictionary Box, the new feature takes a user through an English learning drill.

The educational value of the tool is questionable (the complexity is not scaled nor targeted, some of the phraseology Google uses in their questioning per se might be too complex, etc.). In fact, some have indicated that this could be more Google gathering linguistic data from its users and less Google taking on the role of Sesame Street for non-English speakers around the world.

Sarcastically Signing Off the SERP

The February SERP has been brought to you by the word lexicon as well as by Getty images, appointment only Canadian businesses, and by malls across the world. Google would like to remind you to come fly the friendly skies by using the ever-growing Flight Box to conveniently book your passage through the atmosphere. Don't forget to enjoy a fine hotel (or a complete dump depending on your budget), which can conveniently be booked with Google along with your flight. Please secure your Featured Snippets, as Google takes no responsibility for their loss during the flight, nor during your stay at a hotel, nor during an you booked at a Canadian business via the Local Panel.... you get the point.

See anything odd on the SERP? Let me know!

Until next month, thank you for reading!