Beware of the Ides of March! First and foremost, thank you Google for me letting begin an SEO news blog post with Shakespeare! That being said, for sites that harbored low quality content, March 15th was something to be wary of. Due to a powerful Google algorithm update, March proved to be an eruption of SERP significant action. Combined with some interesting SERP feature shifts and tests, the March SERP has quite the story to tell. 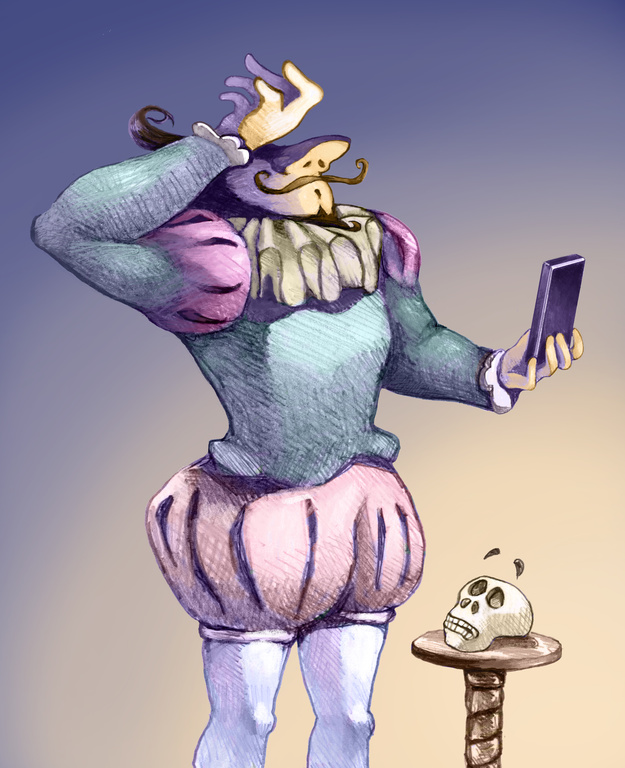 There was nothing comical about Google algorithm Fred, well except for its name. There also wasn't much typical about 'Fred' (sort of like my Uncle Fred). It all started on March 9th when the Rank Risk Index spiked to a risk level of 79 on desktop and industry chatter began to rev up. Algorithm update? Sure, it looked like Google undertook a one day roll-out of what appeared to be yet another unannounced update. At the time the industry speculated that this was perhaps Penguin rearing its cute and fuzzy head and that sites with poor linking practices would be hit.

Fast forward to March 13th. After three days of quiet all sorts of rank fluctuations heck (no bad words in this blog) broke loose! The Rank Risk index showed a two day spike, with a risk level high of 100 (that's hot) on March 14th. Thus was Fred part II. Indeed, this was not a one day update, nothing to look at, everyone go back to work. This was in fact a major Google algorithm event. Not only that, but it appears that the initial analysis of what the update targeted, while not wrong, was incomplete. After seeing Google ratchet things up, the prevailing wisdom was that the update was targeting sites that put revenue ahead of content. After the initial release, it would appear that Google was not satisfied and turned the heat up to hit additional sites and demote their rankings.


My analysis.... Since the start of 2017 Google has released a series of updates that have seemingly been part of its core algorithm, and have thus targeted spammy and poor content publishing practices. In my mind, Fred should be called Frankenstein. I speculate it was made of parts of other algorithms, stitched together, charged with lighting, and released into the wild. That is, Fred, is the evolution of previous spam/content targeting Google algorithms.

With a degree of peculiarity, top displaying Knowledge Graph SERP features underwent a late March spike. Both Answer Boxes and Featured Snippets took an end of the month dip (March 29 - 30) before showing sharp spikes (March 30 - 31). In conjunction with this, Related Questions (i.e. People Also Ask) showed the exact same behavior. Oddly enough, Related Questions, which is a form of Answer Box, utilizes what is for all intents and purposes, a Featured Snippet.


Now follow me here for a second. We track the various forms of Answer Boxes Google shows (i.e. Map Box, Info Box, Nutrition Box, Dictionary Box, etc.). None of the specific forms of Answer Boxes either fluctuated enough, or fluctuated during that period to impact the data for the overall category, i.e. "Answer Box." None except, Related Questions, which dipped and spiked at the exact same time as our data for the overall category, and had movements of significant proportion. In plain English, Google didn't increase the display percentage of "Answer Boxes" per se, but that of Related Questions, a specific form of Answer Box that parallels a Featured Snippet (this is a good example of why one should dig deep when discussing data).


Why is this of any importance? Well, there was some chatter out there about an end of month Google update. In no uncertain terms, there was no update, there were not even slight increases in rank fluctuations caught by our index. Let me explain what did happen, and why you might have thought there was an update. Google increased the number of Featured Snippets showing on Page One. Since the Related Question form of Answer Box utilizes Featured Snippets, this too increased. In other words, all that really changed, were Featured Snippets, which happens more often than you might think.

Is an increase in Featured Snippets an algorithm update? No, no, no and no. So where did the chatter come from? Well, imagine a page that previously did not have the Related Question feature or even a Featured Snippet. A site may show up on Page One. Enter an increase in these features, and this site may be bumped to page two. Take into account, if you don't parcel out the features, you might see a perceived change in rank, when all that happened was Google inserted a Featured Snippet or Related Question.

Every month has its changes to Google's SERP features. March being no different, had a few of its own. Besides for being interesting to observe, some of the changes have a real SEO or marketing impact, such was the case this month.

Home Service ads got a new addition (in certain cases), service area maps. The maps, which were also tested within Local Knowledge Panels, indicate the area where the vendor provides service. The maps are surprisingly detailed, and change from vendor to vendor within a Home Service ads box. As a user, I would say the feature is an added bonus. However, as a vendor, I'm not sure. Having such a detailed map could curtail potential customers who marginally fall outside the listed service area from pursuing services. 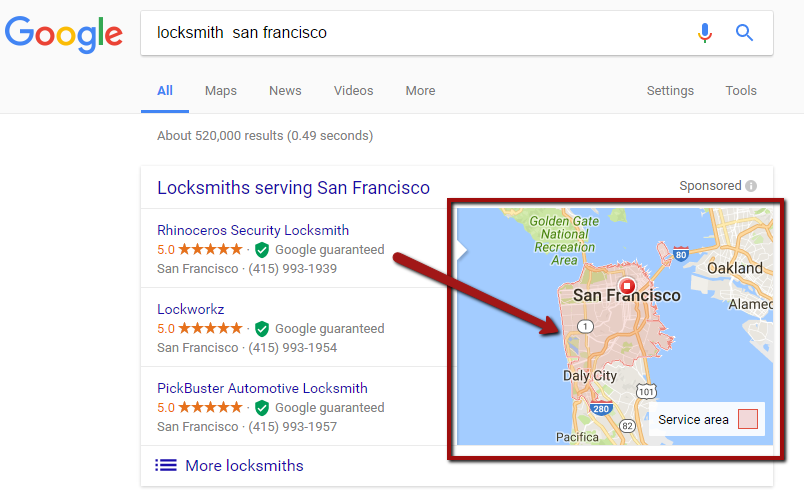 I recently released a case study indicating that even high profile sites that are not AMP won't show on the mobile SERP with a carousel, should Google have an AMP alternative available. (Keep in mind that Google recently increased the number of AMP results within its mobile News Box as well). Continuing with its mobile carousel domination, March had AMP carousels enter mobile's People Also Search For via hidden and subsequently expandable carousels. Just another place for a mobile carousel that features AMP content. Onward to AMP glory! 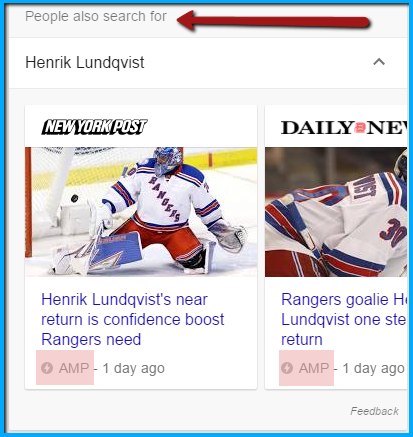 An AMP carousel as expanded within People Also Search For

Google Posts, which made news last month with GIF insertion, is in the news again. The feature, which some speculate is Google's attempt at another social media element, expanded to new categories such as museums, movies, etc. The feature also got pushed out in Brazil, so it appears Google wants to go global with the feature. 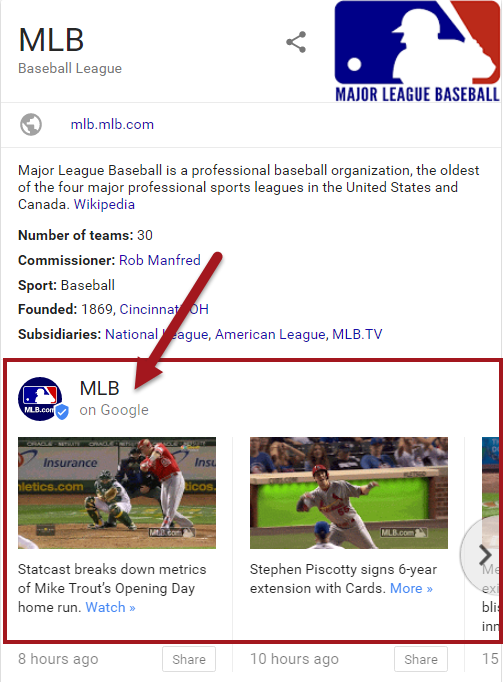 Last but not least is yet another test/change to Local Packs. In mid-March, reports came in that Google was substituting the directions buttons in some of its Local Packs for featured pictures. At the time it wasn't clear if this was a roll-out or a test. Two weeks later, I've been able to produce the directionless but pictured Local Packs for a variety of business. 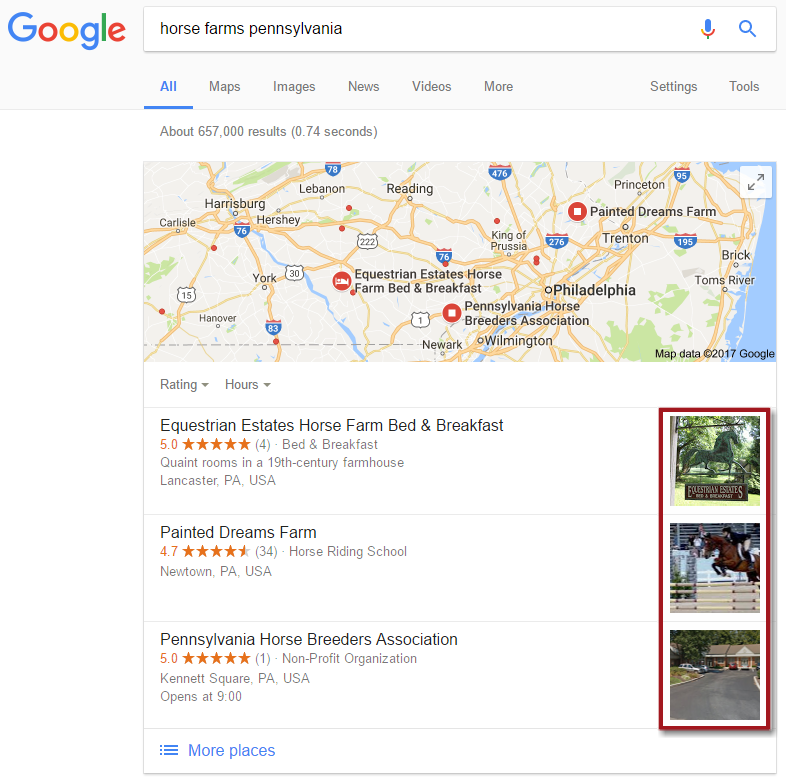 I'm not 100% sure what the thinking is here. Take the above example. I know what a horse farm looks like... it's horses... on a farm. What I don't know is where any of these horse farms are located. Truth is, the directions wouldn't have helped me anyway...

March Makes Its Mark on the SERP

March was an impactful month on the SERP, no doubt about it. Google's latest algorithm update, Fred, made quite the event and made an impression on the industry. It will certainly be interesting to see if the update pattern we've seen in 2017 thus far, continues. The same for Google's mighty morphin' SERP features, what's next to be tweaked, and how might it impact revenues, marketing, and SEO? As always, I'll keep an eye on the SERP for you... you'll be hearing from me next month!