Nothing says fun like tracking Google hit some big time retail sites as part of an algorithm update. Should such an endeavor sound like fun then this article is for you, because that's exactly what happened last month on the Google SERP. To be sure, that's not all of the SERP news that's fit to print. The month of May also saw the introduction of a whole new way to approach Google reviews that could be a "ratings" game changer. Of course, the month was filled with your usual parade of tests and changes to Google's rainbow of SERP features. This is the Google SERP News covering the entire month of May, my name is Mordy, and I'll be your guide.

My grandfather, being from the Lower East Side of New York City, was fond of illuminating his family as to how he often avoided paying retail. Evidently, Google has had a few of those long conversations with my grandfather over a bowl of fruit and sour cream (which to this day I find completely repulsive). On May 18th we tracked a moderate increase in rank fluctuations via the Rank Risk Index. The one day event brought with it a mass of speculation as to what was behind the rank changes. Oddly enough, the initial reports indicated that there was not a lot individual chatter within the SEO forums, which is unusual when it comes to Google algorithm changes.


Using a new tool we're developing, we took a look at how the May 18th update impacted various industries and the domains within them. As fate would have it, we found that a few big names in retail saw some substantial SERP/ranking losses that coincided with the May 18th update. Specifically, Amazon, as well as Best Buy and Overstock, took a slide down page one of the SERP.

In terms of the data per se, we saw Amazon lose 7% of its visibility, Best Buy's average rank slip half of a whole position, and Overstock watch as a whopping 10% of its visibility flew away. Not all of the news was bad for eCommerce sites, eBay ended up a big winner. Per the update, the auction site saw a 29% jump in visibility while its average rank increased more than a full position.

Early in May we saw Google run a test that gave hotels an interesting new format for local reviews. Lo and behold, by month's end Google had confirmed that the format is here to stay. The reviews, accessed by a few taps into a Local Knowledge Panel (I've only seen them on mobile thus far), are different in a few ways. One, they're simply more colorful and attention grabbing as they employ graphics. However, the real change, and subsequently the real upshot, is in the dissection of data you now have access to.

The new format gives an overall rating for the hotel right on the Local Knowledge Panel. However, this rating is now further segmented by Rooms, Location, and Service as shown below: 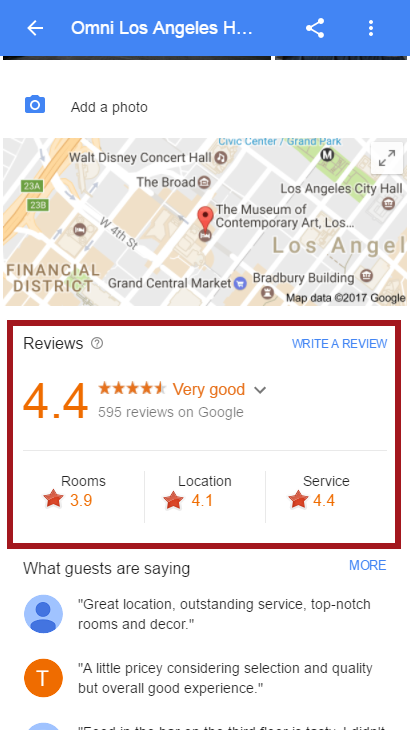 Tapping on any one of the subcategories (i.e. Rooms, Location, or Service), brings you to the overall rating for the criteria. Except, as you'll notice in the image below, the subcategory is further divided by the type of guest (i.e. Couples, Families, Business, and Solo) with each guest type receiving its own rating: 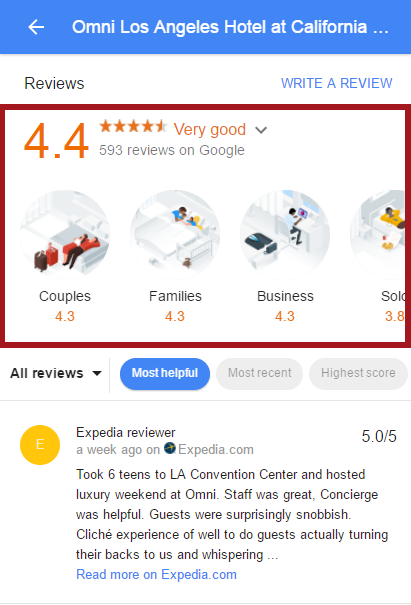 Now, tapping any one of these "guest type" icons gives you the full story on the hotel vis a vis that sort of guest. Meaning, if we say click on Families, we can see how the hotel performed in terms of Rooms, Location, and Services: 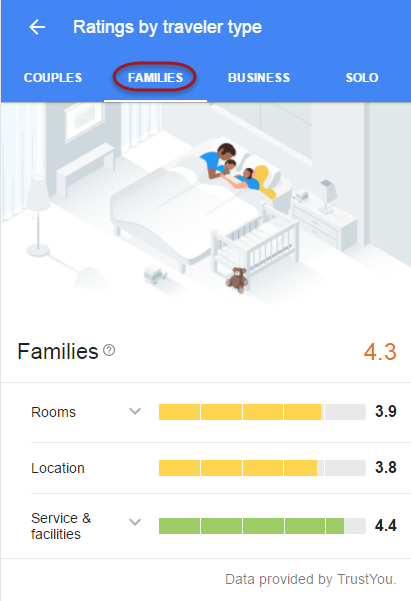 But wait, there's more! When applicable, Google enables you to see a list of items that qualify the rating. For example, in the image below couples gave the rooms at a hotel a 3.7 rating. By expanding the accompanying list you can see that couples "liked the large, clean rooms, though some commented maintenance could be improved." 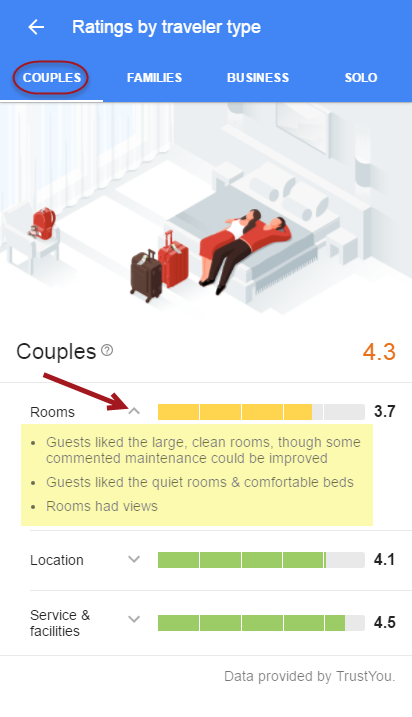 I, as a father of three young children that would wreak havoc on a hotel, care about these reviews. I really like seeing if a place is kid friendly or not. But outside of the detailed information and the nice layout, why does this matter? Let me ask you, if you were a betting man or woman, would you say that Google is going to confine this new and improved format to hotels and only hotels? Probably not right? So what you're looking at here could be the way Google goes about local reviews altogether, at least when it can since I would assume the format does not work for every category of business.

If indeed you're looking at the future of Google reviews here, that's a  big deal. It means that sites need not only concern themselves with ratings, but ratings from specific demographics. It means their product, service, and even website needs to sit well with different demographics, which is not always easy. Google already knows the age of many of its users, would you be surprised if at times ratings were broken down by age? What would it do for your reputation on the streets if those youngsters gave you a poor rating?

May Tests and Changes to Google's SERP and SERP Features

Obviously the change to how we see hotel ratings on mobile is an extensive one. Still, there were a series of other SERP and SERP feature tests and changes that were of notoriety.

Called Google for Jobs, the newly announced feature follows a test that was first spotted in early May. Though it appears that the new SERP feature has yet to launch, Google did officially confirm that it is forthcoming. The feature, from what I've seen so far, would present a list of local jobs related to a query (such as Long Island construction jobs). The question in my mind is what the impact will be to job sites such as Monster or Indeed. It would be interesting to see if Google has in fact partnered with such a site the way it did with the Mayo Clinic when it created its Health Panel.

Let's turn our focus to the way we can now go about image search. In early May Google made sorting through those endless series of images from around the web a bit easier with a new set of filters. You can now filter your image results to show the latest images, GIFs, or clip art. Perhaps most importantly, you can search for images according to color via a new color filter. 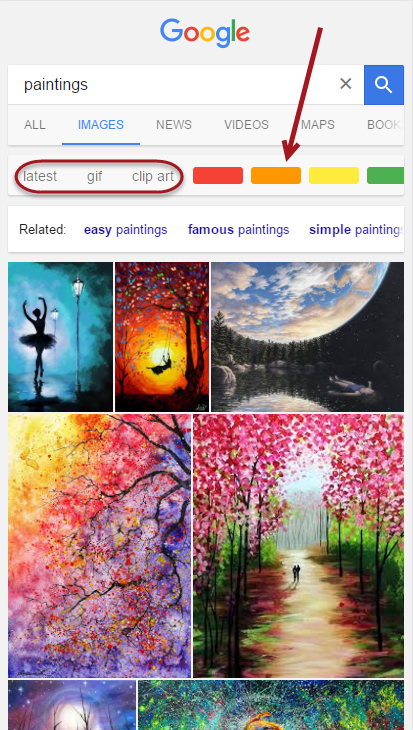 The new filters that are now part of Google's image search

The filters (which thus far I have only seen on mobile), while relatively straightforward perhaps indicate, when considered within a larger context, the role images play within the Google search scheme. Just consider that Google only recently announced that ads will start to appear within image search. It just goes to show you that small changes over at Google often exist within a much more substantial and impactful context. Enough said.

Last December we saw Google's Home Service Ads undergo dramatic change with a hyper-localized map and Google Guarantee status. Now it seems that Google has gone back on that expanded format, showing the ad type via horizontal cards at the top of the SERP. I personally speculate that Google finally saw the redundancy of having a box containing three local businesses along with a map sitting on top of another list of local businesses with a map, i.e. a Local Pack. That is, having Home Service ads appear in a format that was essentially mini Local Packs directly on top of an actual Local Pack always seemed not only redundant, but crowded. Google, you read my mind here. 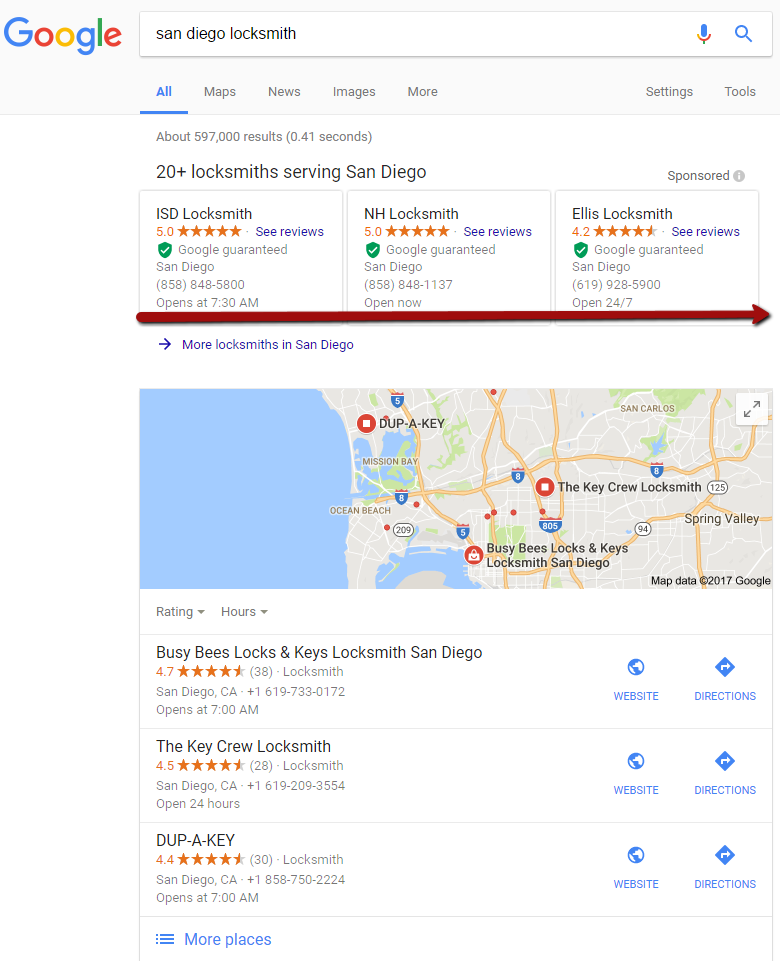 In mid-May we discovered that Google was showing some of its list information related to actors/actresses, not within top of the SERP carousels (as they always had) but via Featured Snippets.

For the record, you'll notice the query shown within the above Tweet is in the plural, i.e. actors, not actor. Still, Google is now showing a Featured Snippet related to the winners of the Best Actor Oscar award. Meaning, Google is taking the query to mean that I want to see a list of the winners of the Best Actor award when in truth the more likely intent is a desire to see a list of who is considered to be the best actors ever (this query does still produce a carousel as shown below).

I would venture to say that if someone wanted to see a list of the winners of the Best Actor Oscar award, most people would enter a query along the lines of best actor winners, one that specifies the award per se. Why? Well would you consider Whoopi Goldberg, Marisa Tomei, or Cuba Gooding Jr. to be some of the greatest actors/actresses ever (no matter how likable they may or not be)? No, and neither does Google when you look at their carousels for best actor ever  (see above) and best actress ever (see below), despite the fact the aforementioned movie stars have won an Oscar for either best lead or supporting actor/actress. All I can say is that this all is not just interesting, but a bit peculiar.

Rolling Along with Google's Algorithm Updates

We're not even half way through 2017 and already we've seen some really interesting Google algorithm behavior (cough cough Possum... Fred). Seeing some of the biggest names in retail commerce slip down the SERP just adds to the recent Google update drama. It all begs the question, what's next? If the current pattern holds true, there are sure to be more interesting SERP shake-ups (so stay tuned). You have to wonder, what is the larger behind the scenes strategy driving these updates over the past few months. For the moment, your guess is as good as mine.