Not too shabby. At least, that's my sentiment when looking back on the moves Google made on the May SERP. After analyzing the changes made to the Google SERP over the course of the month, I'm left wondering where we are heading and what is Google pushing towards? Not that most of us are not always concerned about those two questions, but there were quite a few tests that seem uniquely "interesting." Add on a major change to meta-descriptions and the continued push towards a mobile-first world, and we have ourselves quite the month for this, the latest edition of the SERP News. 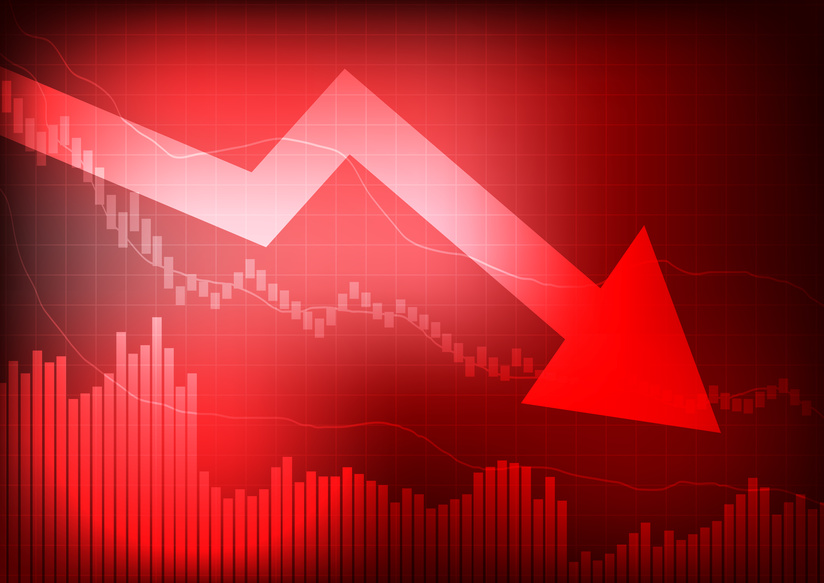 The Short of It - Google Reduces the Length of Descriptions

Circa mid-May, Twitter was set ablaze as site owners and managers the world over began noticing that meta-descriptions on the SERP were getting shorter and shorter. We actually tracked a reduction in description length a few days prior as the average character count dropped from around 230 characters to 195 between May 7th and 8th. I'll be honest, I initially thought this was a test or even a bug as description length climbed back up on May 9th. I was wrong. After 2-3 days of "length stability," Google threw description duration off a cliff as average length hit the floor at around 160 characters.

As May rolled in, Google announced that the second wave of mobile indexation was upon us. In fact, according to some accounts, a third and fourth wave was also released. Interestingly, as the floodgates of mobile indexation slowly opened, site owners, particularly those whose sites were not deemed mobile-friendly, were getting notices that their site moved over to the mobile-first index. Previously, Google had indicated that sites "not ready" for mobile indexation would not be moved over, at least not at this time. Upon seeing this, Barry Schwartz of SERoundtable.com inquired of Google as to the reasoning. Based on Google's response, it would seem, that being or not being mobile-friendly isn't a part of the mobile indexation readiness that I previously mentioned.

Later in the month, and as more sites moved over, I noticed that these sites, when looking at the cached page accessed via the SERP, resulted in a 404:

As chance would have it, literally five minutes after noticing this, I came upon a Tweet from Aleyda Solis, pointing out the same thing. Google's John Mueller replied to Aleyda saying that it's simply a matter of Google catching up with its caching of the sites as they now exist (i.e., on the mobile-first index).


May's Changes to the Google SERP

It's that time again... time to see what changes, updates, and tests Google made to the SERP during the course of the month. As with any month, there was no shortage of interesting "tidbits."


A Series of Featured Snippet Tests

There were three really interesting tests that Google ran for Featured Snippets last month. Of course, it being Featured Snippets, there are some fascinating implications that come with these tests.

Test 1 - Expandable Subtopics: Starting things off was a Featured Snippet where Google tested showing multiple subtopics accessed via expandable tabs. In the case found, a mobile Featured Snippet for the term garage conversion displayed on top of a set of tabs, each headed with a subtopic related to converting a garage into a genuine room. Expanding a given tab would produce a new snippet, with its own URL. 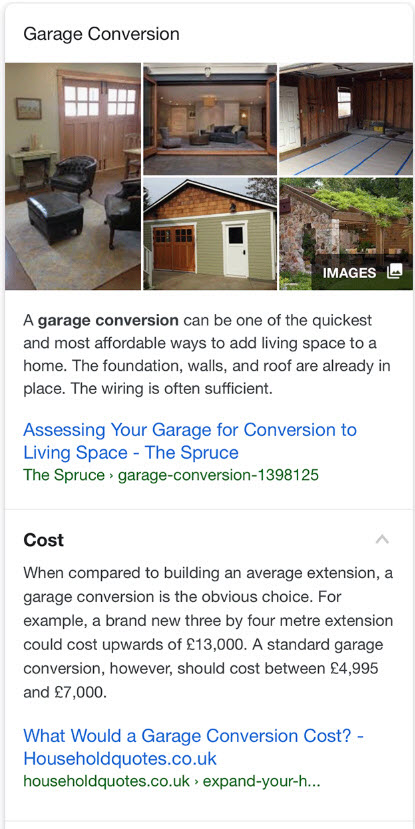 
Test 2 - Featured Snippet Feedback: For our second Featured Snippet test, Google asked for feedback from its users. Appearing under the snippet's URL, Google was testing a blue bar asking if the snippet was helpful and gave users the ability to select either yes or no. 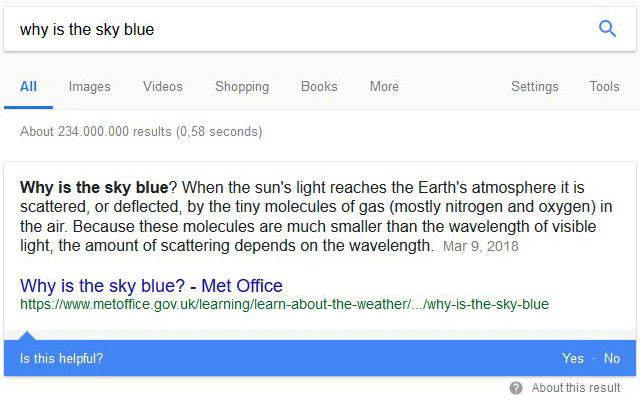 
If I were to ask you why Google ran this test, I would venture to say most people would speculate that it has to do with Google trying to offer more accurate and less scandalous Featured Snippets so as to bolster its voice search aspirations. While I would agree that this is probably a big part of it it, I wonder if there's more to it than just that. I asserted above that machine learning is playing a larger role in Featured Snippets. It would make sense then, that just as Google is increasing AI's Featured Snippet touch, to get some feedback to help that process evolve and learn. 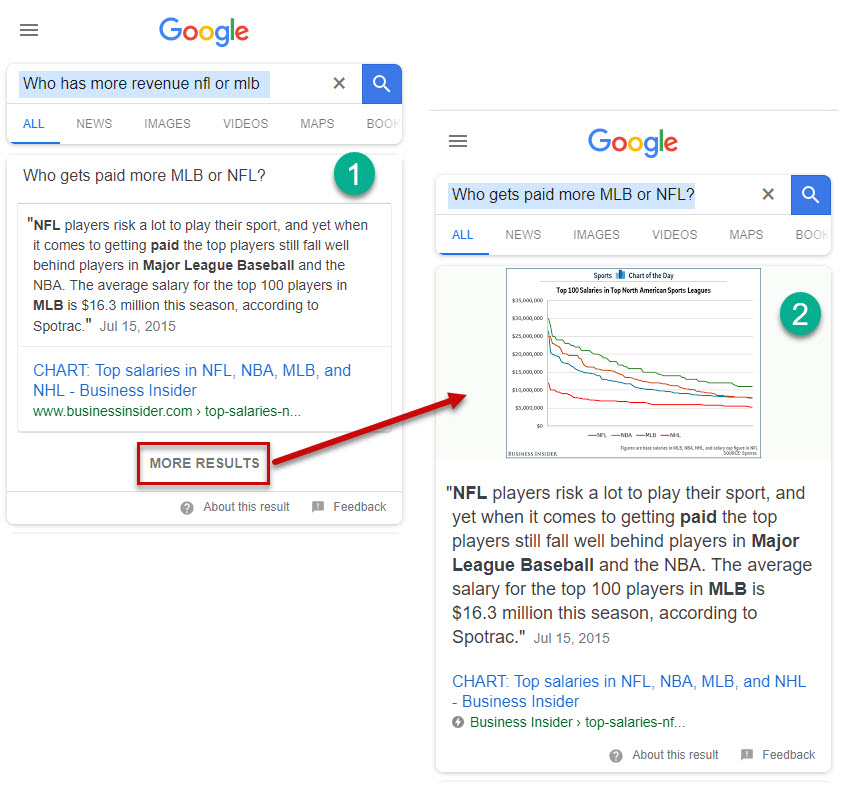 
Not only that, but I found the button showing in a more prominent blue (as opposed to gray) within Related Questions (i.e., People Also Ask): 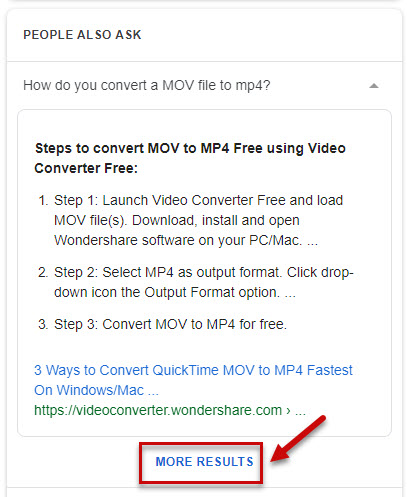 Within the 'People Also Ask' feature, the 'More Results' button shows in a more noticeable blue

Now, it would be one thing if Google showed you more information on the same topic via the button or something along those lines. Here though, Google offers you a related topic to the one shown in the initial Featured Snippet. Or, in other terms, Google yet again is offering you access to a sub-intent of sorts via the Featured Snippet. Let's not discuss what the button may mean for the organic results below the content containing box.

Featured Snippets aside, there were a number of changes made to the SERP and Google's SERP features in May. Again, and per usual, some interesting and downright odd items with their own implications. And away we go...

Submit a Question to Google

OK, so this one is bizarre. In early May, Google confirmed that it was testing a feature where users could manually submit a question to Google. The search engine may then turn the question over to a content team so that an answer can be drafted. The idea is that users, unsatisfied with the current content their query brings back, can have all new and satisfactory content drafted. Google can then index this content and serve it for similar searches. Which is why this feature was headed with "Get the answer that you're looking for added to the web." 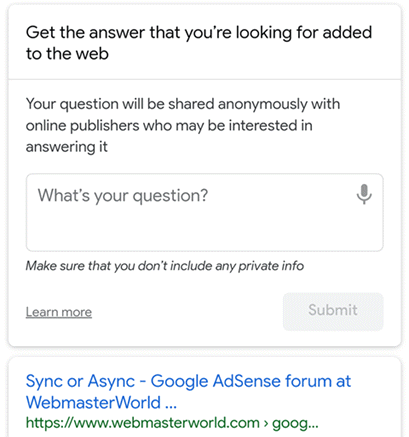 This peculiar test had Google asking users to manually submit questions to be answered by a content team and subsequently indexed on the web (Image source: SearchEngineLand.com)


I was not aware that there was a content shortage, but if there is, this seems like a very slow and inefficient way to bridge the content gap.


A 'Similar To' Carousel Above the Local Panel

In this test, a carousel of related businesses appeared above the Local Knowledge Panel on mobile. 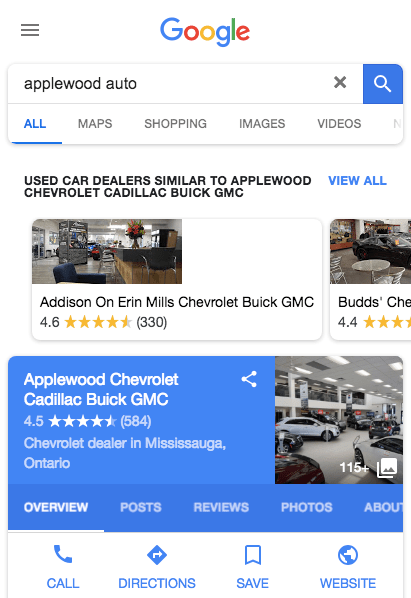 May saw Google test a carousel of related businesses above the Local Panel on mobile (Image source: SERoundtable.com)

Big deal, right? Wrong. Until this point, the top of the SERP for a local business was dominated by the said business's Local Panel. The only point where competitors came into the picture was the carousel(s) of related establishments that appears towards the bottom of the panel and only once it has been expanded. This test brought the competition front and center, or rather top and center.

Speaking of the Local Panel, you, as in local businesses, can now add video content to your Google Posts. 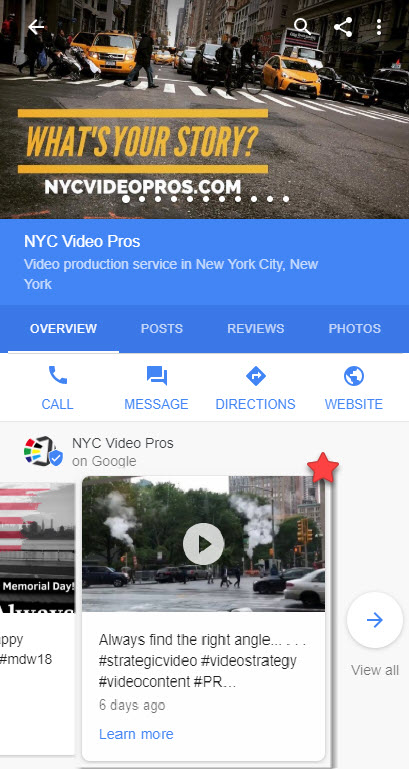 Google released some new markup recommendations for recipe sites. Among the new structured data options, are videos. Allow me to translate. People increasingly consume "recipe" content via video (such as those that are quite common on Facebook). Knowing this (probably through YouTube data), Google is saying, "if you want to rank well as a recipe site, throw a video onto the page."

Google announced that as of July 2018, bail bond ads will not be shown on the SERP. The AdWords ban is not the first of its kind. Google has previously banned payday loan ads and addiction treatment ads (though it now allows the latter via a verification process). Google says that bail bond ads are to be banned as they "make most of their revenue from communities of color and low-income neighborhoods when they are at their most vulnerable."

The World Beyond Mobile-First 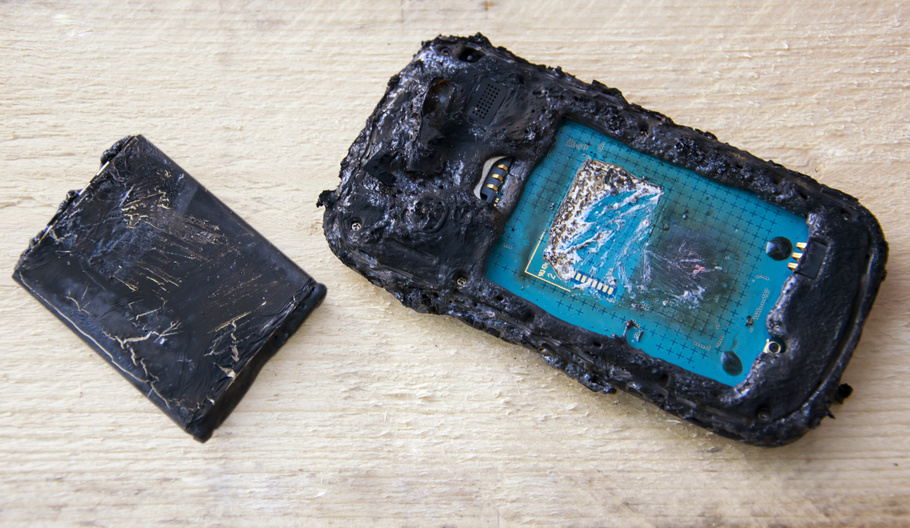 Obviously, the newest waves of mobile indexation are significant. The same goes for the significant decrease in description lengths on the SERP. That said, the real big-ticket news items as far as I am concerned is where Google seems to be headed when Featured Snippets are concerned. Featured Snippets, as opposed to being a self-contained SERP entity, are slowly (or perhaps quickly) becoming a dynamic ecosystem all unto themselves. Whether it's a continuous flow of Featured Snippets (as in the expandable snippet test), or whether it's the ability to move from one snippet to the next via the 'More Results' button, the SERP feature is becoming "sticky" by encouraging users to stay within its "environment." What's more, machine learning seems to be involved in matching user intent in all new ways, making the feature a potent force that seems to have more importance than ever over at the Googleplex.

And with that, we must part. I hope you've enjoyed the latest edition of the SERP News. As always, I would love to hear from you. Whether it be a comment, question, or just a random thought... reach out!