It seems that the cooler air (at least in my part of the world) brought with it a spirit of change over at Google. Big changes, little changes, accidental changes, and purposeful changes, November brought SERP changes of all kinds. (Has Dr. Seuss officially rubbed off on my writing style?) For a good part of the month it almost seemed that Google was making some sort of change to its SERP features with each passing day.

As I discussed in a recent series I did on Google's Knowledge Panel and Health Panel, this Google SERP feature is a powerhouse. Over the past month the SERP feature got a series of new additions to propel its ability to engage with users.


Google Providing Real-Time Reporting on How Busy Stores Are

Let's start with the coolest "Knowledge Panel addition" that surely raised Edward Snowden's eyebrow. For over a year now many retail outlets listed in the Knowledge Panel SERP feature are accompanied by a nifty little gadget called "Popular Times," which like it sounds lists what times during the day a store is more likely to be crowded. Then, this past July, Google began indicating how long people typically spent at a given store. Now, Google has gone all the way, offering live updates as to how busy a store is. I don't know how Google is pulling the data, and I'm not sure I want to, but this is a fascinating addition and I'm sure quite helpful (to those who don't loathe shopping such as myself). 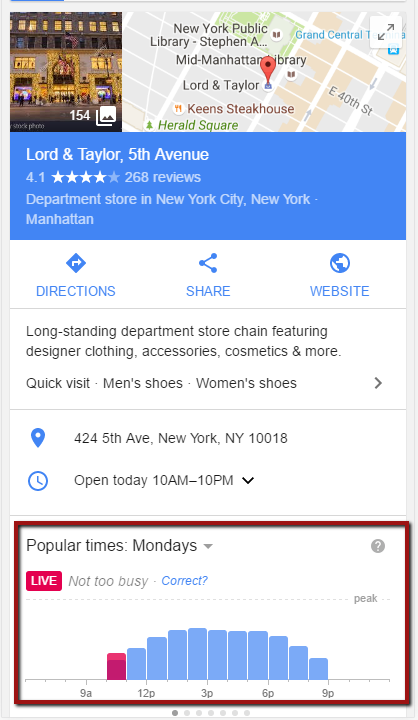 There are deep implications (theoretically) to Google showing this kind of data. Local SEO expert Mike Blumenthal put the new feature to quick use in an innovative way, comparing foot traffic at competing retail stores via the feature. It will be interesting to see if competing stores use the data the same way, tracking their competition's customer volume in real time. Certainly a savvy shopper could employ the use of real time data before heading out to the store, deciding which shop to visit based upon the current customer volume (and implied wait time at the checkout). As such, Google's new Knowledge Panel "trinket" has the potential to translate into real dollars and cents.

It seems as though Google had its eye on TV and movies last month. On November 16th Google added "on TV soon" to those Knowledge Panels related to a current TV series. The newly added table indicates when the next episode will air, the season/episode number, and on which network you can watch the show.

Two days after incorporating TV show air times into the SERP feature, Google added a "like" and "dislike" button to Knowledge Panels related to TV shows and movies. So now, after seeing when your favorite show will air via the SERP feature, you can rate it as well.

Lastly, sneaking in at the end of the month, reports came in that Google had started inserting video into certain Knowledge Panels under the heading "Videos from the web." What's a bit controversial is that the videos all appear to be from Google owned YouTube, not the "web" at-large as the heading would seem to imply. 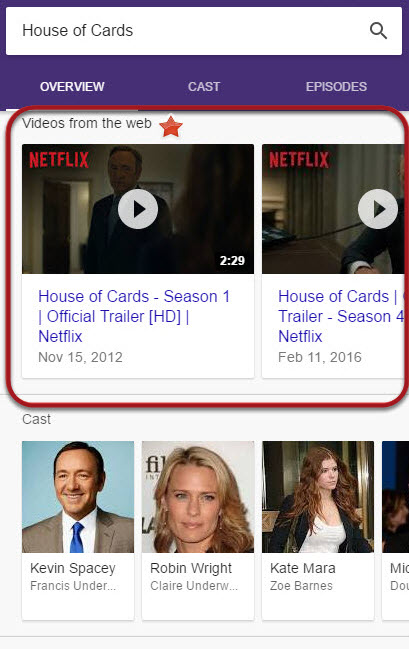 Changes to Ads on the SERP

November saw a slew of changes to ads on the SERP. Not limited specifically to AdWords, Google made some interesting adjustments and some peculiar tests to its "SERP ads" in the month of November.

Back in July, Google introduced price extensions to AdWords that allowed advertisers to indicate the costs of advertised goods. On November 14th, Google published a Tweet saying that the price extensions in AdWords received a tech upgrade that took them from showing as a boring old list to swipeable cards. Simultaneously, Google also said that the cards would now be available for use in 10 languages.

Price extensions will begin showing as swipeable cards, and will roll out in 10 additional languages. Learn more: https://t.co/6PhGOmz6ue pic.twitter.com/QlPyzsEASl

Prices weren't the only "extension" to get an overhaul. Just a week or so after its price extension update, reports came of Google testing swipeable SiteLink image extensions. The test essentially attached images to a scrollable carousel of SiteLinks within a mobile PPC ad. I haven't personally been able to replicate the results shown on Search Engine Land, but find the test interesting in any event. There is an obvious connection to the rollout of the swipeable price extensions and the image centered SiteLinks carousel. It's interesting to see how Google thinks, lumping two similar extensions together. What's fascinating to me is that Google decided to roll one extension out, and only tested the other, thus begging the question, why not just roll both out?

Last month I reported to you that Google was working on tightening up Local Pack results related to home services (i.e. plumbers, etc.) by running a test in San Diego that had plumbers and locksmiths go through additional verification. It seems as though Google has not only figured out how to vett local repair-persons, but how to monetize the process as well. 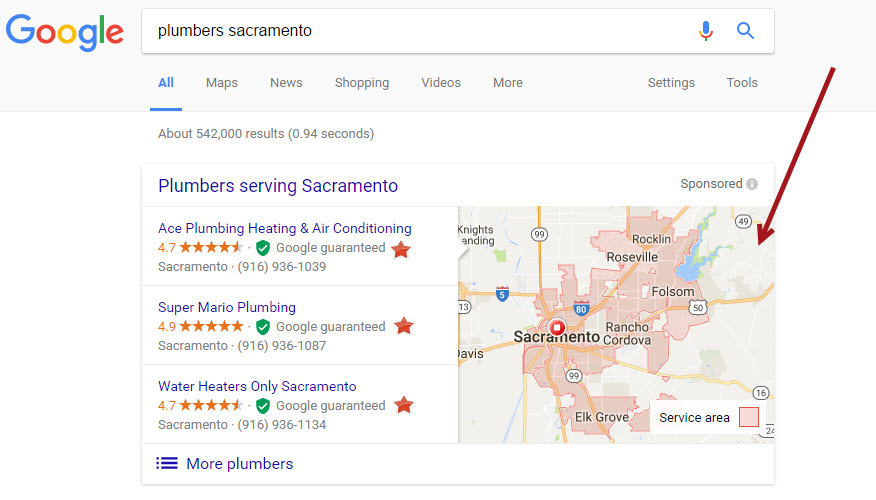 
Just as we saw a test to ads running with SiteLinks, Google put out quite the interesting ad. Showing up only in California, where Google had run its intense verification process, the search engine giant rolled out "mobile Home Services Ads." There was also a change to desktop where a service area map was inserted into the ad format. However, the biggest change to the format is the new "Google guaranteed" status. To become Google certified, vendors must go through an advanced vetting process, which aligns to Google's advanced verification aimed at refining Local Pack results. By booking such a vendor via Google, a customer could actually seek monetary claims from Google themselves should there be a real service issue.

It's noteworthy to point out that the newly enhanced (and enlarged) Home Service ad format, map and all, in a way overshadows the Local Pack (which appears under Home Service ads).

Did you ever wake up in the morning, half asleep and hair uncombed, only to sit down at the computer, type a search into Google and wonder which sites on the SERP have notoriety? .... Yeah, me neither. So, on November 3rd, our tech team discovered that Google had removed the Notable Online feature from the SERP.


For the many of you who simply did not use the feature, Notable Online was a snippet overlay that was attached to sites of renowned authority (think major news outlets, prominent universities, etc.). 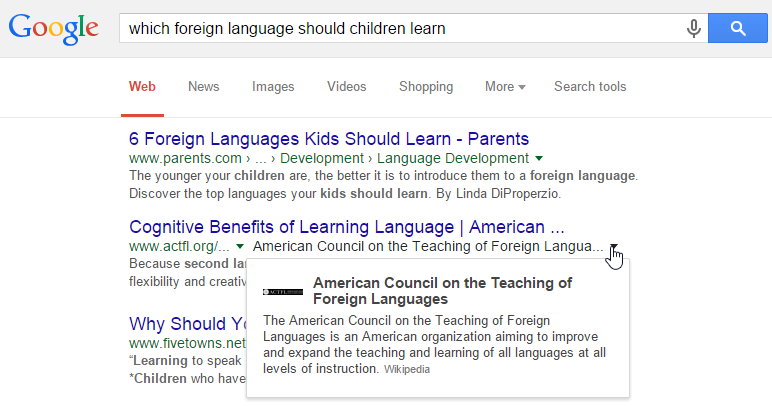 
A site deemed "notable" would appear with what was usually the name of the site in gray. Clicking on the down arrow would bring up an overlay that was, for all intents and purposes, a featured snippet that gave some background on the organization behind the website.

A few days after removing the feature, Google confirmed to Search Engine Land that Notable Online was removed from the SERP due to low user engagement, i.e. no one was really using it.

While Google had specific intent in removing Notable Online from the SERP, it had no such forethought behind what was almost a total erasure of SiteLinks from both the mobile and desktop SERPs. Between November 2nd and November 4th our SERP Features tool and Mobile SERP Feature Tracker tracked an approximate 75% drop-off in the number of Page One results showing at least one result with the SiteLinks feature. Not only was the drop-off on both desktop and mobile, but it spanned the globe with the feature falling to low levels across the board.

Two days after we broke the news of the SiteLinks drop-off on Twitter, Google confirmed that the lowered display levels were not intentional and had been a bug which the search engine said they had already fixed. True to their word, Page One SiteLinks picked up starting on November 9th as indicated in our Insight Graph.


By the time the month ended, SiteLinks had not only rebounded to pre-bug levels but exceeded them in many countries. In the US, SiteLinks showed a 7 point increase by month end on desktop, Canada (desktop) 10 points, the UK (desktop) 9 points, etc.

The mobile specific SERP feature, Rich Cards, which launched last May, is now showing for two new categories, restaurants and online courses. We actually found Google testing Rich Cards for the courses category on May 24th. Previously only "top recipes" appeared within the enhanced cards (although at its inception, Google did indicate they would appear for movies as well, not sure what happened there). 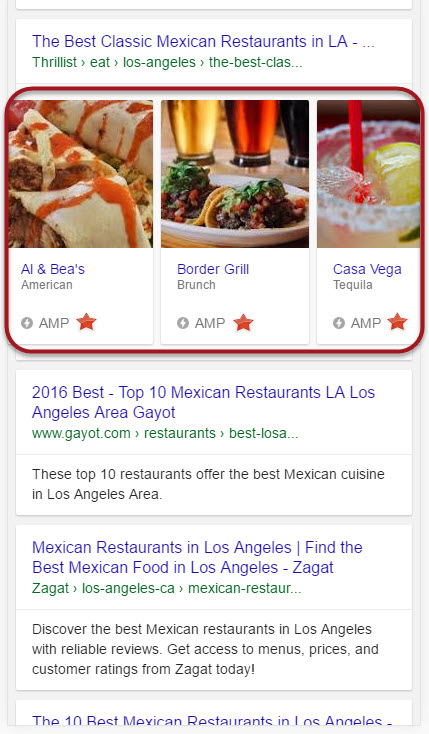 What's perhaps most interesting, Google has indicated that AMP pages can be attached to the cards. In fact, Google outright recommended that you use AMP pages for the cards. While going AMP here is not required, you have to wonder if Google will give preference to the speedier mobile format.

Reflecting on the November SERP

It's interesting to see Google hone in on a specific SERP feature in such a concentrated manner the way it did with Knowledge Panel (and even ads to a certain extent) this past month. Of course why now, why all of the renewed focus on the Knowledge Panel? Who knows! Couple all of the changes to ads and Knowledge Panel with the removal of Notable Online and the bug that decimated SiteLinks and you have yourself a really interesting month on the Google SERP.