It's hard to believe another month has passed, but here we are with October behind us and a lot of SERP "doings" to discuss. Though not as climactic as September's SERP, October had a "SERP characteristic" all of its own. While the month was not predominated with algorithm updates embedded within SERP feature alterations (i.e. September's Image Box drop-off), there were a few big ticket items nonetheless that made October another significant month on the Google SERP.

Let's start by orienting ourselves to what kind of month October was on the SERP. Was it one of those months that resembled stormy waves crashing against the coast and uprooting rankings along the way or was it more a subtle sort of SERP month? In all honesty, it looked like October was going to pick up right where September left off and present us with another wild ride for rankings. Like September, the beginning of October rolled in with rank volatility with the Rank Risk Index recording a five day fluctuation spike that began on October 3rd.


What is interesting, or perhaps ironic, is that Googler John Mueller indicated that Google releases many of its algorithm updates towards the end of a quarter. It's thus interesting to see that the end of the quarter, i.e. September, was relatively quiet, while the start of the new quarter showed a prolonged series of SERP fluctuations. When all was said and done though, October did not seem to present the same sort of fluctuation depth that September had. After the initial spike at the month's onset, the rest of the month was relatively quiet, with the initial fluctuations remaining a bit of a mystery and as such unqualified.

Now, just because October was not a momentous month for SERP fluctuations doesn't mean it wasn't special. SERPs are like children, they are all special (which sounds like something you would hear in a typical election, with this year's Presidential election not being typical). As is well known, AMP entered mobile organic results in September. What you may not have know was that only a very limited number of countries were seeing such results, that is until October rolled in.


Starting on October 7th, our Mobile SERP Feature Tracker recorded organic AMP results beginning to show in earnest throughout many European countries. In a sense, this is reminiscent of when Google rolled-out Featured Snippets throughout the European market. In fact, as with the expansion of Featured Snippets into Europe, most countries are showing a minimal percentage of Page Ones showing at least one AMP result. For example, at month's end, the Netherlands was only showing organic AMP results within just over 2% of its Page One SERPs, with Denmark showing just over .5%. However, as Figure 2 clearly indicates, AMP in organic results has been rolled out in these countries in a manner that constitutes a formal release of the SERP element/feature.

By the way, for those interested in following the advance of AMP, Rank Ranger has released a new tool to track AMP on the Google SERP. It allows industry professionals and website owners to stay informed and make decisions accordingly.

Changes to Page One Ads

One of the big areas where we saw a lot of "SERP activity" last month was ads. October actually presented some rather odd news related to ads on the SERP, some of which still needs to be qualified and explored further. 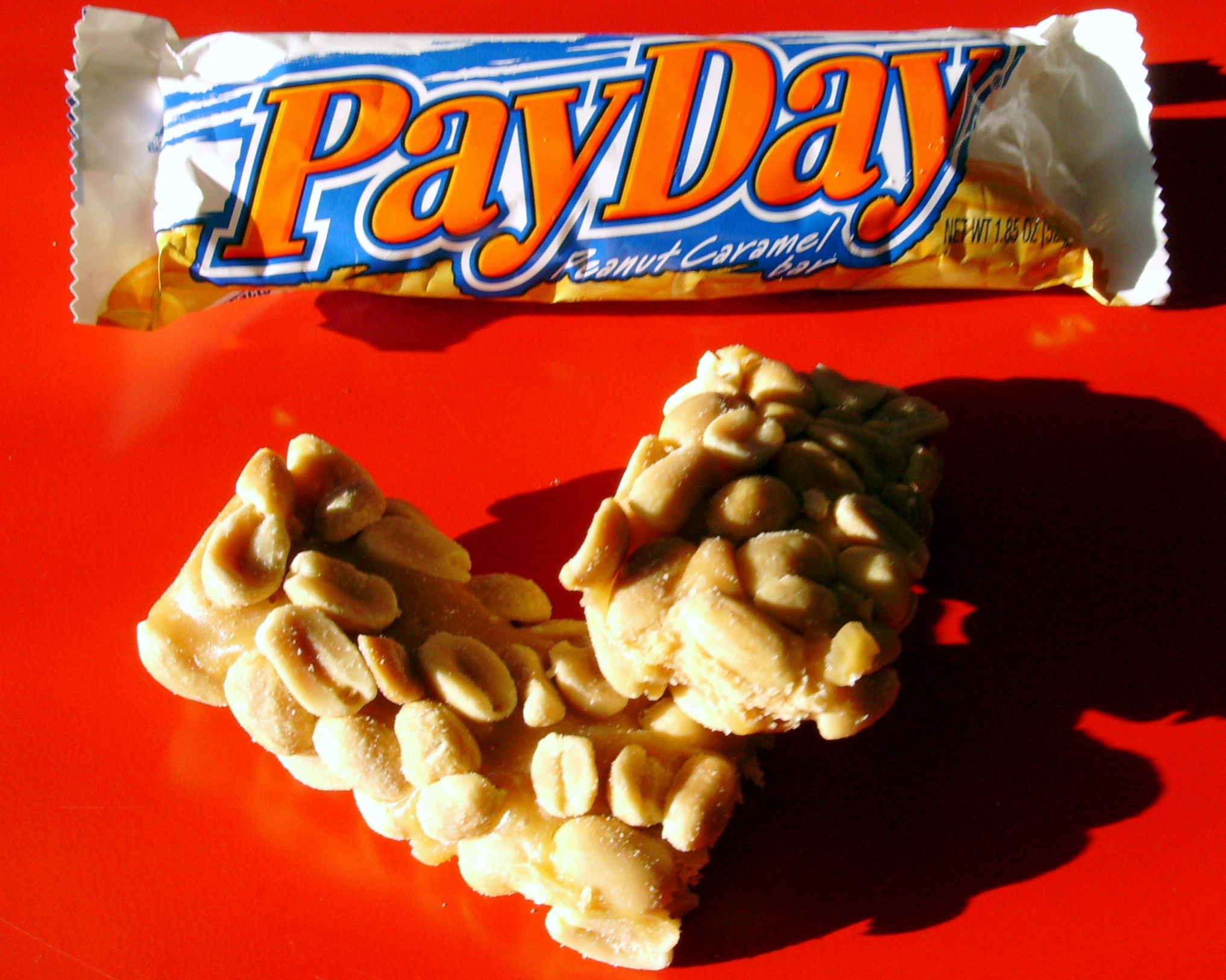 Way back in May Google announced it was banning payday loans. Well, as of last month they were still appearing on the SERP. On October 6th, Ginny Marvin from Marketing Land published an article that for all intents and purposes said, "Hey! Why is Google still running payday ads in October?". Coincidence or not, but the very next day, voila.... the SERP saw a hefty drop in the number of payday loan ads showing up.

Global Drop in Page One AdWords Ads on Desktop

One of the most interesting things, at least in my mind, to come off of last month's Google SERP was this sort of enigmatic drop in the number of Page One ads on desktop. Between October 2nd - 4th, desktop ads took a sizable dip on Page One of the SERP. Throughout the course of the month, desktop ads, though climbing at certain moments, continued their descent. What's undeniably interesting is that this trend was seen on the global level, with countries like Australia, UK, France, Japan, and many more seeing their Page One ads on desktop greatly disappear.


What's really curious is that the smaller shifts in the presence of ads that took place throughout the month displayed a global uniformity. By way of example, Figure 3 shows a Rank Ranger Insight Graph with all of the displaying countries taking a small spike in ads between October 11th - 14th. This pattern of concurrent shifts globally runs throughout the month. What's more is that numbers are a bit staggering, the US went from showing ads on 30% of Page One SERPs to just over 12% by month's end. Australia, the UK, France, and Japan all saw a 50% reduction in Page One ads as well.

You can't simply walk away from numbers like these. Currently, we are exploring various explanations for the drop-off with other industry experts and expect to have an in-depth post on the topic forthcoming.

Like any month, October saw changes to the SERP and SERP features that were on the more conspicuous side and those that were more subtle and nuanced. However, just because a change to the SERP and/or its features didn't move the needle on the Richter scale, doesn't mean it lacked significance.

Back in September, if you remember, Google rolled-out an algorithm update dubbed Possum in an effort to filter out spammy and duplicate results from the Local Pack and Google Maps. After the update was pushed out, it was apparent that there were still some quality issues within Google's Local Finder. In an effort to combat spammy local results, Google ran a test requiring locksmiths and plumbers (two searches that traditionally bring up spammy local results within Google Maps and Local Pack) to go through an "advanced verification" process.

Though the test seemed to be isolated to a specific location (San Diego), I think it speaks volumes in that it indicates that Google is aware of the problem and is working towards a solution. Also, the nature of the solution, in my estimation, seems to go right to the heart of the problem. That is, instead of trying to tweak the algorithm or make some other sort of "technical" adjustment, Google went to the source, illegitimate vendors trying to pass themselves as the real thing.

Local Knowledge Panel Gets Pictures from the Menu

Last but not least in our October SERP overview are "From the menu" pictures that are now part of Local Knowledge Panels related to restaurants. Like it sounds, Google is offering the ability to see what actual dishes at a restaurant look like. The reason this is significant is because it highlights not only how prolific Google's Knowledge Panels have become, but also the central role they play in providing Page One content to users. 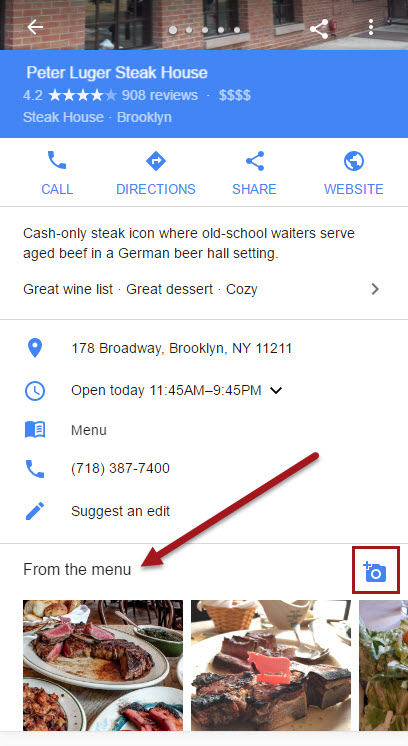 If October's SERP has one lesson for us, it's that SERP changes are not always relegated to gaudy algorithm updates with their flashy rank fluctuations. No, no, no, SERP updates can come in all sorts of shapes and sizes. Whether it be a little AMP lightening icon within European organic mobile results, a magical AdWords disappearing act, or even a picture of a mouthwatering steak within a Local Knowledge Panel. It just goes to show you that the SERP has become a living and ever-changing entity of sorts.

The question of course is as always, how will this entity known as "the SERP" continue to evolve? Will AMP successfully claim world domination (a question that I think is on the mind of many)? And of course, what's driving the sinking ship formerly known as Page One ads on desktop?