As the dust settles on this past week's SERP performance we've seen the rise and fall of some familiar SERP faces. In our quest to see who has appeared, who has has disappeared, and who disappeared only to reappear again (and so forth), let's begin with those who have fallen the hardest. Sadly, this past week we've had to say goodbye to an 'oldy but goody', In-Depth Articles, who in medical terms "coded" on April 10th (as is indicated on our Insight Graph).

Imagine a giant boulder being suddenly dropped into a large pool of water. Think about the waves it would cause, the massive crashing of water bouncing in every direction... because this is not that... not even close. You might have thought that the absence of In-Depth Articles would cause some sort of significant SERP fluctuations in some regard, but alas... not really. Being that In-Depth Articles were considered organic results, your SEO intuition might have told you that the number of organic results per page would change... you would think. Our data indicates pretty much the opposite. Looking at the average organic results per page, we don't see that sort of earth-shattering organic results change we were all secretly hoping for. (Search your feelings, you know it to be true!)

The demise of In-Depth Articles was not limited to just Google USA. The UK similarly showed the drop-off as well. Just in case you were hoping that at least the UK would show some sort of impact due to the absence of In-Depth Articles, we looked at the number of organic results here as well. Don't be disappointed when we tell you that the UK performed along the lines of its American counterpart.

So, the loss of In-Depth Articles didn't send quivering vibrations all throughout the organic results world... oh well. Not to fret, there is still another avenue to explore.... ads. Could it be that Google removed its In-Depth Articles to make space for the ads it now concentrates on the top and bottom of the SERP (as opposed to the side of course)? Think about it for a second... with 12 organic results, it's a bit much to squeeze in all of those ads on the top and bottom of the SERP. Could this be why the above data did not show wild and spectacular fluctuations in organic results? Is Google then trying to save room for revenue (i.e. ads)? Turns out our handy-dandy SERP Features tool corroborates this narrative by presenting a rise in ads appearing within queries (data shown for the United States). 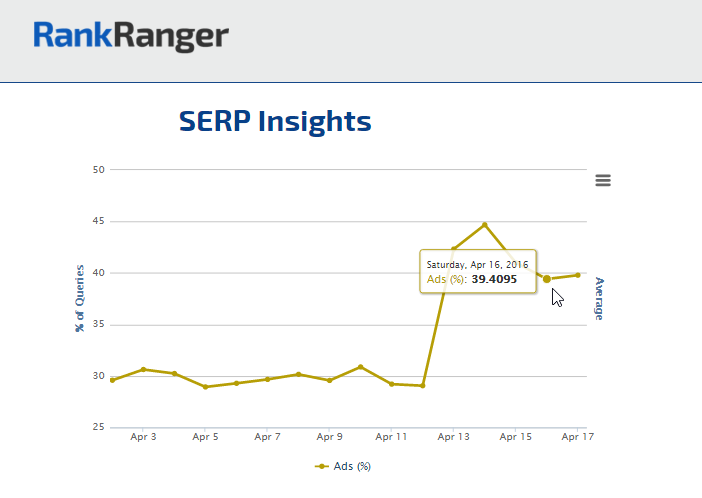 Based on this, it would appear that Google has possibly done away with In-Depth Articles in order to make the SERP more manageable considering the current ads format. We'll keep tracking the performance of ads on the SERP to see how this plays out going forward.

What would an update on the wide-world of SERPs be without a reference to our Rank Risk Index? With just one look it's easy to see that the Rank Risk Index was picking up something to talk about. It's hard to ignore the fact that Google was abound with life and movement. 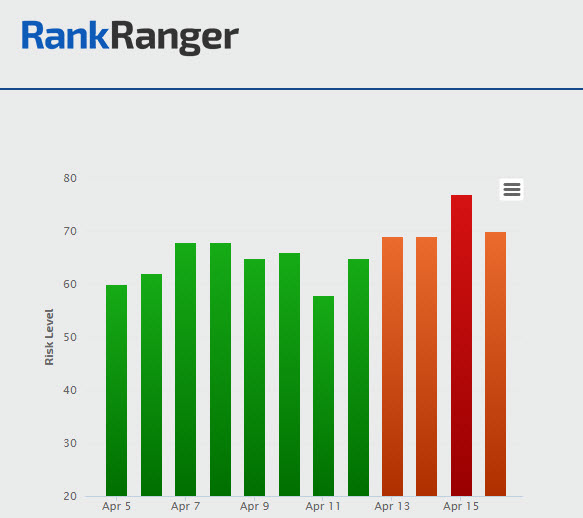 After an exhaustive search we found a plethora of movement from a variety of SERP Features corresponding to the fluctuations on the Rank Risk Index.

The symmetry of the data on this Insight Graph doesn't lie, there is a clear shift on the 12th that reached a pinnacle the next day. To varying degrees, Featured Snippets, Carousel (White), Carousel (Black), Answer Box, SiteLinks, HTTPS, and Notable Online all underwent a sharp dip between the 13th and 14th, with the exception of Knowledge Panel, which spiked and leveled-off.  This is after a sudden spike on the 12th in all of the features save Featured Snippets, which moderately moved upwards, and Knowledge Panel, which continued its downward decent. By the 15th the features either rebounded or continued on their new trajectory (more or less). All-in-all, and with absolute clarity, there was a distinct "Google event" that began on the 12th and continued all the way through the 14th.

Did you have your own SERP story last week? How many organic results appeared on the SERPs containing your ranking keywords? Did In-Depth Article absence increase your ad presence? Let us know, we' d love to hear from you and include your insights in our next post!