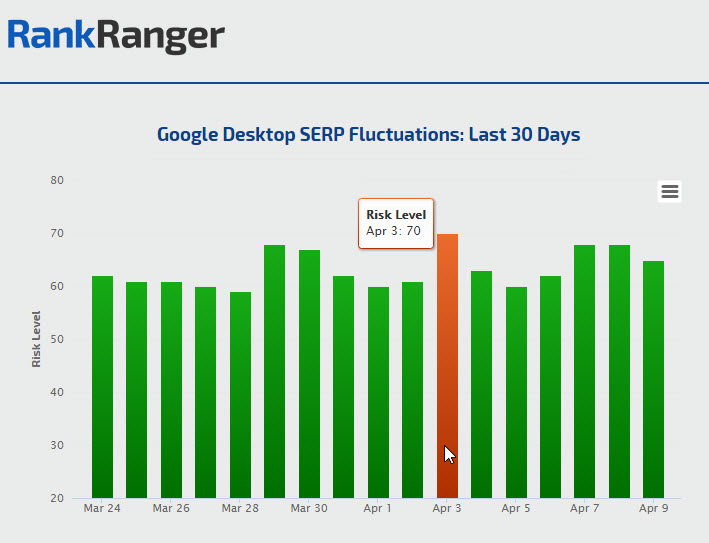 wild week for our SERP Features tool which pulled double shifts just to bring us the best data out of "Google SERP land." (Actually, it's a software program with no conception of time or work-shifts, but we'd like to think of it as a person anyway.)

With so many things to analyze, countries to mention, and SERP Features to discuss, let's dive right in by setting our sights on a SERP fluctuation picked up by our Rank Risk Index.

Considering that our Rank Risk Index measures fluctuations for over 10,000 domains, we take it seriously. So when it spiked on April 3rd, thereby indicating substantial SERP fluctuations, we knew Google was up to something of some sort. Concurrent to the fluctuation on the Rank Risk Index we noticed that Local Pack results in the United States took a sharp dip on our SERP Features tool, thus corroborating our hunch that something was amiss. Like the Rank Risk Index, the dip was a one shot deal. By the next day Local Pack results shot back up and leveled off to its previous range of display results.


Being the SEO sleuths that we are, we decided to dig a bit deeper and see just how dynamic and meaningful this dip really was. I mean, maybe the dip was just a fluke and had no real correspondence to what we saw on the Rank Risk Index? Maybe, maybe not. We decided to run the data on Local Pack over some of the top performing countries for the feature. Turns out that yet again our hunch was correct. Using our Insight Graph we picked up the same dip in the UK, Australia, Canada, and Mexico. As indicated below, each country took a slight dip only to rebound and level off the very next day. Coincidence? In the world of Google algorithms is there really any such thing?

Local Pack wasn't the only thing we saw taking a quick dive in the deep end. We saw an interesting trend in the US with regards to Carousels (Black), Images (Box), SiteLinks, and Related Search... they all went for a dip on April 6th. Like Local Pack, the features rebounded quickly, rising the very next day with each feature going in its own direction and on its own trajectory.

While the fluctuations weren't enough to set the Rank Risk Index off, we had our suspicions that something was yet again adrift. We set our sights on the UK to see if the 6th held any significant data there as well. What we found in return was undeniably interesting. Our Insight Graph showed up with two sets of data shifts appearing on the 6th. Like the US, there was a dip downwards when showing results for Ads, Events, and HTTPS. Conversely, SiteLinks, Carousel (Black), and Knowledge Panel shot upwards on the 6th.

While no one can possibly determine exactly what Google is up to, the performance of these features across two data dynamics (Google USA and Google UK) can't be dismissed and is indicative that there was some sort of occurrence at Google. It's interesting to note that a few folks over at WebMasterWorld also saw SERP changes that day, as was reported on Search Engine Roundtable.

We'd be remiss if we didn't end our SERP Snapshot by humbly mentioning the SERP Features discovery that we made last week. Like we said, our SERP Features tool was working overtime, and in doing so found that Featured Snippets were appearing in countries across Europe where they previously were not (as shown by the Insight Graph below).

See our blog post entitled Featured Snippets Come to Europe for a full report on the this SERP Features sighting.

Did you notice any odd SERP performance last week? Did any SERP in any country seem out of the ordinary to you? We'd love to hear what you saw. Share your thoughts with us, maybe they'll end up as part of our next SERP Snapshot!