As June faded away what enduring SERP legacy did it leave behind? What SERP significance did the first two days of July bring with them? As always the SERP Features Tool is ready, willing, and able to help decipher the latest SERP data coming out of Google.

Ironically, last week proved to be a relatively quiet week on the SERP (not to say that the month was quiet overall, it certainly was not, you'll just have to read on). Things were relatively stable across the usual SERP players, i.e., the US, UK, Australia, Canada, and so on. However, once I went down under, no not Australia but New Zealand, all of that seemed to change.

Some might assume that the New Zealand SERP behaves in accordance with its larger neighbor, Australia. However, I've seen the New Zealand SERP  do some crazy things before and have learned not to make that assumption. New Zealand's SERP is as independent as its sovereignty, it acts alone and it sure showed its autonomy last week with some bizarre SERP fluctuations. 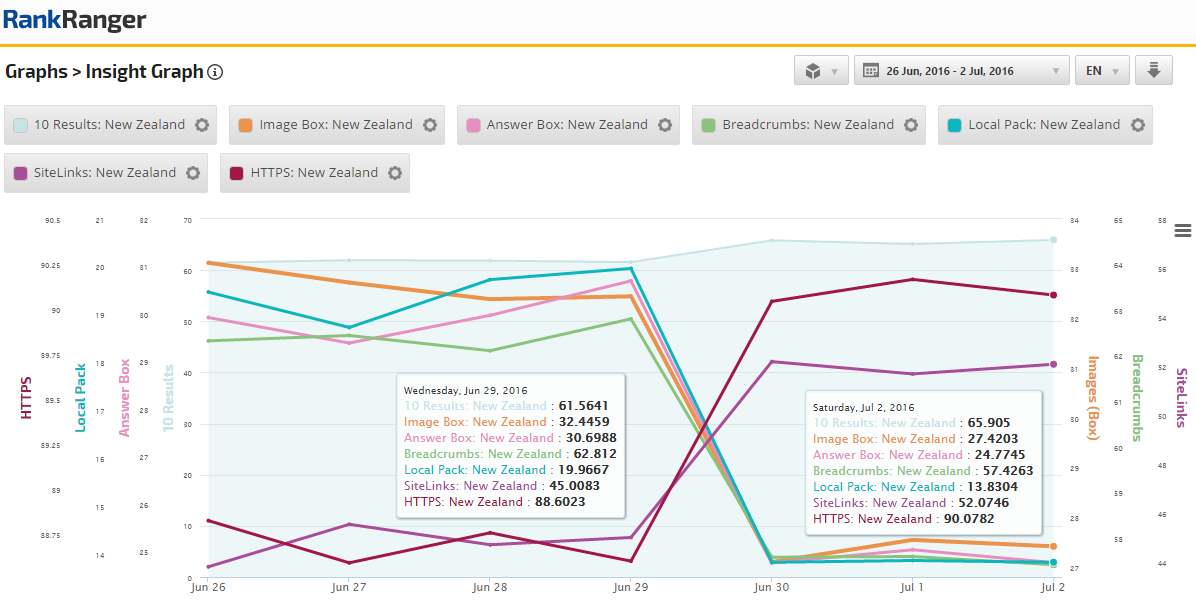 
What's surprising about the SERP data that came out the country last week is that the features that shifted were those that are generally more stable in New Zealand, and globally as well. For features such as HTTPS, Breadcrumbs, Local Pack, etc., shifting 2% would be an aberration. Here however, after the shift between the 29th and 30th, and by the time the week ended on July 2, the percentage of 10 organic results spiked over 4%, SiteLinks over 7%, and HTTPS around 1.5%  (which for the feature is simply enormous, considering that over the previous 27 days the feature rose a total of 3.5%).

With big increases came large losses as well. Again, shifting between the 29th and 30th, Image (Box), Answer Box, and Breadcrumbs all showed over 5% losses by July 2, while Local Pack saw an over 6% loss as well. In other words, concurrently big numbers from a seemingly unexpected place, from unexpected features, all point to a SERP shift in New Zealand. I'll keep my eyes on it to see if this data trajectory continues, or if the numbers return to previous levels... my bet is on the former.


A Month of SERP Trajectory Shifts

Let's start with the SERP in the US, where there were two sets of SERP shifts, an early month and mid-month data transition.

Fig 2. Map Box in the US takes an early month loss while Related Questions and HTTPS rise and take on a new data trajectory


Map Box started the shifting trend by beginning a data dive on June 8 (showing a roughly 3% loss by the 9th), from which it never recovered. By month's end the feature went from accounting for 71.44% of all Answer Boxes to taking up 67.05% of Answer Box real estate.

Coming off a slight downtrend, HTTPS also began an early month data climb that started on June 9. Unlike its Answer Box counterparts, the percentage of Page One results that presented HTTPS didn't reach a new plateau in a single bound. Instead, the feature climbed at a steep rate until June 15 and ended the month with an over 3% net gain.


As promised, mid-June presented a second SERP shift bonanza. As mentioned in the June 14th edition of the SERP Snapshot, Featured Snippets broke the 5% mark in countries around the world. What we did not know then, but can certainly see now, is that the feature in the US (among other countries), took on a new data trajectory at even higher levels, via a June 14 - 15 spike.

A day later, following the Featured Snippets spike, the average Description Length of results in the US began a bump that resulted in a full percentage point increase from its June 1 start. Beginning the month with an average of 156 characters per result, the average length of result descriptions was 157.1 by June 30, an unusual increase that has thus far displayed some lasting power.

Lastly, and frankly peculiarly, Landing Pages within Page One results went topsy turvy displaying at a low the SERP Features Tool had yet to record. Interestingly, by the 25th the percentage of Landing Pages returned back to previous levels.


Adding fuel to the shifting SERP trajectory fire, the feature vacillation indicated in Figures 2 and 3 were not isolated to only the US. Indeed, the June SERP shifts indicated in the US were prevalent throughout the English speaking world. Just by way of example, South Africa showed a similar decline in Map Box, Australia displayed an analogous shift in Related Questions, the UK also saw HTTPS take on a sharper data incline after a slight drop off, while Canada took on a mid-month Description Length spike.

Of course, as the old saying goes, timing is everything, and the timing here is perfectly aligned to the data shown in the US. Just as in the US, Related Questions in Australia started to rise on June 8, HTTPS in the UK on the 9th, while Canada's Description Length took off on the 16th.

Fig 5. Related Questions, HTTPS, and Featured Snippet data for the first half of 2016 in the US


The month of June not only presents the opportunity to analyze monthly SERP data, but with its conclusion comes the chance to analyze SERP performance for the first half of 2016. What better way to do so than by looking at the data over the past six months for some of June's trajectory shifting SERP features.

Related Questions, which as indicated in Figure 2 took an over 3% increase in June, showed an impressive 8% increase since January 2016. If you look at the data trend for the feature as presented within Figure 5, you'll see just how significant the one day spike in June was compared to its day-to-day movement.

Seeing just how steep HTTP's data incline (which began on June 9) actually was puts the data within Figure 2 into perspective. Other than a dip and subsequent rise back in February, the feature has not moved up that sharply in six months. Overall, since January 2016, the percentage of Page One results that present at least one HTTPS result has risen nearly 13%.

Overall, these three features have not only been continuing to rise in the US over the last six months, but have uniquely taken on multiple trajectory shifts, with the latest occurring this past June.

The desktop SERP was not the only one to undergo significant trajectory shifts. Our soon to be released Mobile SERP Features Tracker caught a few of its own "data fish." Actually it caught the very same SERP features that shifted on desktop!


Like its desktop counterpart, Map Box on mobile showed an overall downtrend as June progressed. However, the percentage of Answer Boxes that consisted of Map Box altogether were nominal, unlike on desktop.

Mobile data trajectories that coincide with desktop performance does not preclude the mobile SERP from having its own identity. One of the most significant trajectory shifts unique to mobile was the mid-month upswing of 9 organic results when compared to the percentage of 10 organic results displaying. 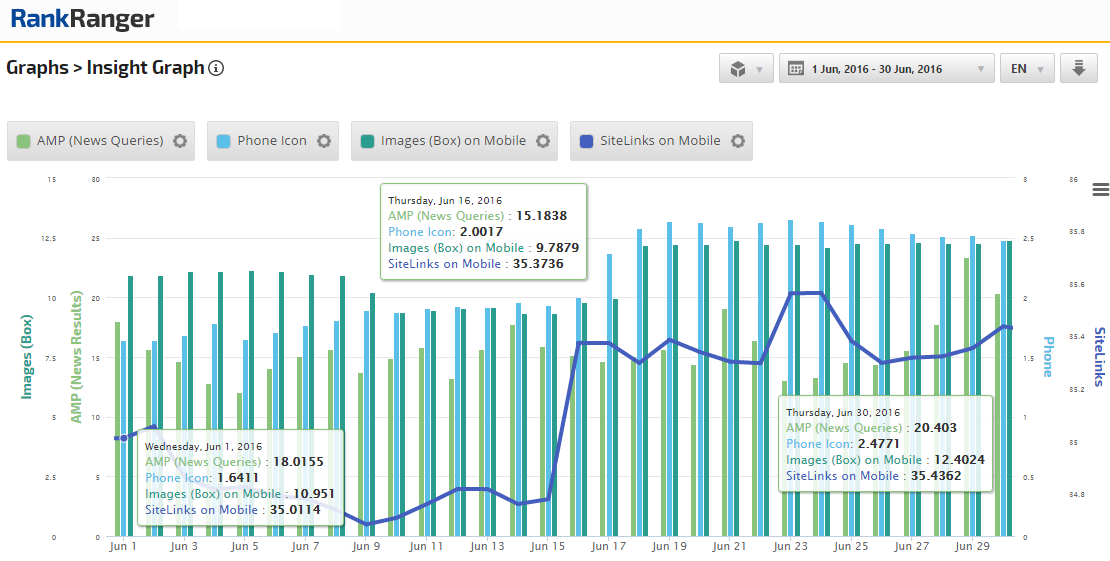 
To start things off, AMP (News Queries) had a pretty volatile month on the mobile SERP in the US, even considering that the feature does follow the news cycle to an extent (i.e. with less news on the weekends, there are subsequently less AMP pages showing on the SERP). In fact, June 29 saw AMP history with a new high of  AMP showing within 23.42% all new queries in the US.

What is even more fascinating is that Phone Icon is on the move and in one direction only, up. Still not appearing in a huge amount of Page One results on mobile, the feature did break the 2% threshold by mid-June and ended the month with an almost full percentage point increase.

In regards to the features that both desktop and mobile share, Image (Box) and SiteLinks displayed uniquely significant data on mobile. Image (Box) ended the month with an almost 1.5% increase. However, between June 16 - 30, the feature underwent an over 2.5% increase. SiteLinks on the other hand did not even garner that much of a percentage increase. Although, as Figure 8 clearly indicates, the feature underwent a spike that for all intents and purposes constituted yet another SERP trajectory shift in the month of June!

A little spike here, a small SERP trajectory shift there, why is this data on mobile so significant? Three words, mobile... SERP... fluctuations.

Fig 9. Risk levels on mobile show at elevated levels for nearly half the month


For 12 out of June's short 30 days, the Rank Risk Index for mobile showed elevated fluctuation levels. If this were May, when Google rolled-out a mobile algorithm update, I would say these levels make some sense... but that was May and this is June.

Consider then not only the quantity of days with increased risk levels, but the quality as well. Half of those days showed only moderate risk levels. In other words, yes there were fluctuations, no, they were not always seismic sort of shifts.

Thus, when you see features like Phone Icon taking small steps forward, or SiteLinks taking a new data trend upon itself, in conjunction with shifts in organic results,  HTTPS, Featured Snippet, AMP (News Queries), and Image (Box), the concept of the mobile SERP being in a constant state of flux emerges. A state of flux that is perhaps indicated by a series of moderate to sharp risk levels on the Rank Risk Index throughout June.

With so many SERP data changes in June is there anything July can do to top it? What new trends and changes will the new month bring to Google's SERP on desktop and mobile? What will the next six months of SERP data look like?

Have any predictions? Forecasts? SERP prophecy? I'll take all comers!