As July began to truly set in with the passing of its first full week, Google SERPs around the world displayed some odd data patterns. Join me as I employ the ever potent SERP Features Tool to pull in last week's Google SERP features data from around the world in an effort to reveal the latest Google SERP fluctuation patterns. These fluctuations are a reflection of the minor, and not so minor, Google algorithm updates which take place hundreds of times per year.

Let's ease on into last week's SERP data with a good old fashioned global downtrend. Ads saw a global data downtrend last week from which it has yet to rebound.

Fig 1. The percentage of ads appearing on Page One of the SERP decreases globally between July 3 - 9


Between July 3rd and 4th, there was a global fall off in the percentage of ads appearing on Page One of the Google SERP. The data in Figure 1 represents a sample of countries that showed a drop off last week, and represent regions from all over the world.

Some of the world's most ad concentrated SERPs saw a significant decline in their appearance on the SERP last week. Within a one day period Canada and Australia each saw ads on Page One of the SERP drop just over 7 points, while India recorded an almost 9 percentage point loss.

Other lower performing countries such as Sweden, Japan, and France each saw a roughly 7 point decrease in Page One ads. Even the UK saw an advertisement decline, sporting a modest 4.6 percentage point decrease between the 3rd and 4th.

Over the course of the week the data leveled-out as ads in the listed countries plateaued at their new and lower numbers. Though, countries such as India, Sweden, and Japan saw additional loses of 2 points or more between the 4th and the 9th as well.

What is of course apparent (I speculate) is the evident impact of some sort of Google update to the SERP in regards to ads. That so many unrelated and diverse countries showed a downtrend that began and ended simultaneously, and that was within the same percentage range, cannot (most likely) be taken as coincidence (again, I speculate).


To quote Shakespeare, "Cry havoc!, and let slip the dogs of war." In all honesty, I don't have a better word for what occurred on the SERP in Ireland other than havoc. There was just so many SERP feature data changes on the Irish SERP that it could be a bit chaotic to look at and analyze. With that disclaimer out of the way, let me take a shot at it! 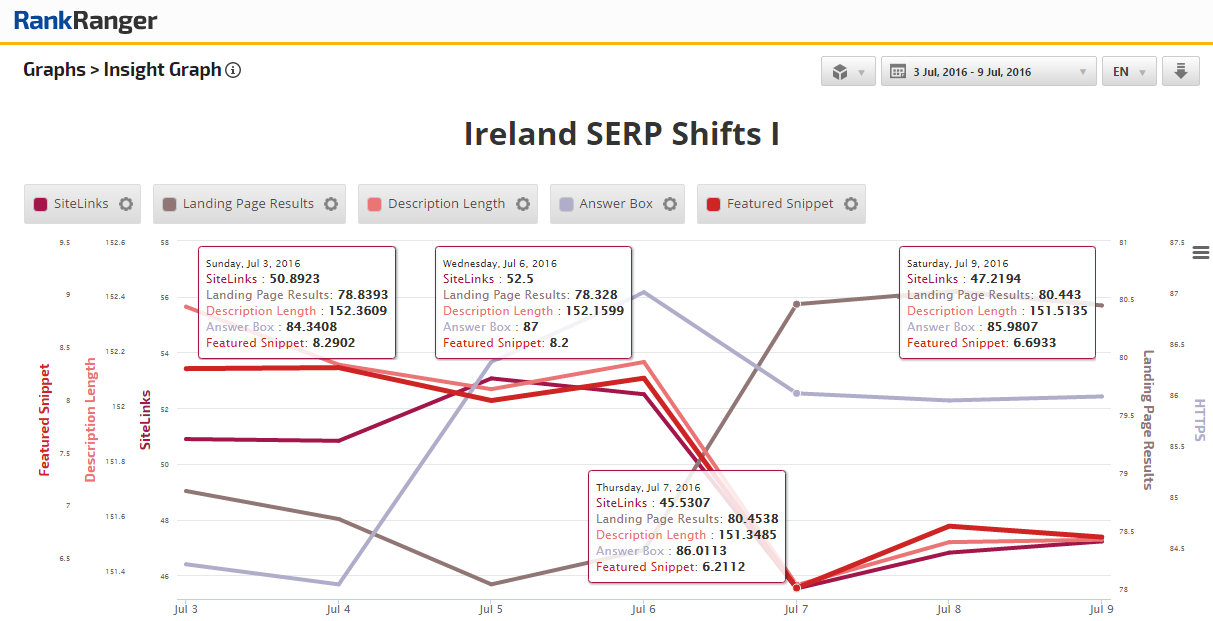 
This first set of data out of Ireland (yes, I said first, as in, there is more, much more....) is unique in that it presents a continuation of last week's data. Though not displayed within Figure 2, SiteLinks, Landing Page Results, Description Length, and Featured Snippet all came into the week in the midst of a significant data decline, while Answer Box walked into the week smack in the middle of a data spike.

As you can see however, last week on its own presented quite the set of SERP features data. After rising 2.5 percentage points between the 3rd and 6th, SiteLinks dropped off nearly 7.5 points by July 7. Conversely, Landing Page Results shot up around 2 percentage points between the 6th and 7th as Description Length fell off almost a full character during the same period (not bad for a SERP element that barely fluctuates a tenth of a percentage).

Answer Box had quite the interesting data path, rising just under 3 points between July 4 - July 6, but falling just over a single percentage point by week's end. Though, of all the features presented in Figure 2, Featured Snippet is perhaps the most interesting. Why you ask? Because although it seems to have performed much like SiteLinks and the Average Description Length, looks can be deceiving. On July 6, I reported to you that Featured Snippets in Ireland had nearly tripled between May 23rd and 24th. As such, what occurred last week was essentially a return of the feature to its more traditional levels. 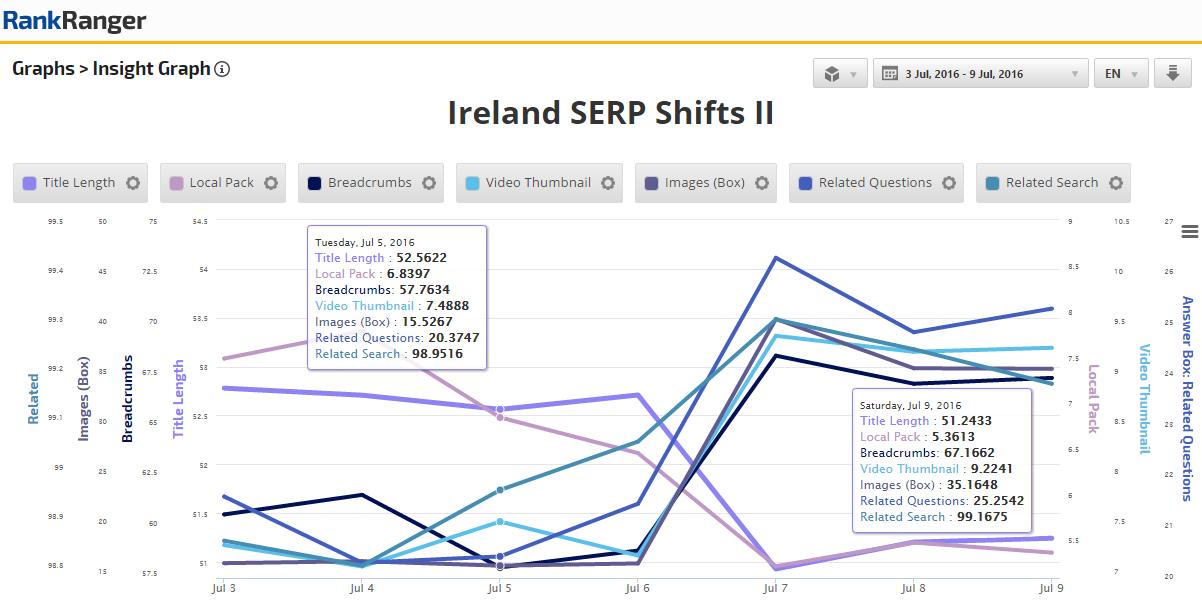 
As indicated quite clearly in Figure 3, a staggering seven additional features (for a grand total of 12 features) showed considerable fluctuations on the Irish SERP last week.

Title Length, which likes its counterpart Average Description Length, is not a big SERP mover and shaker (i.e. its fluctuations are relatively minimal), dropped just under 2 whole characters between July 6th and 7th. Local Pack was another big loser (hey, no name calling!), though unlike Title Length it suffered a more gradual decline losing a tad over 2 percentage points for the week.

Breadcrumbs had quite the week in Ireland last week, as after a small decline in numbers between July 4th - 5th, the feature showed an 8.5 percentage point net gain with the majority of it coming between July 6th and 7th. Breadcrumbs however was not the only feature to show strong gains between the 6th and 7th, as Video Thumbnail, Images (Box), Related Questions, and Related Search all saw a spike during the same period. Images (Box) in fact saw an astounding 24 point increase between the 6th and 7th!


Organic Results on the Irish SERP 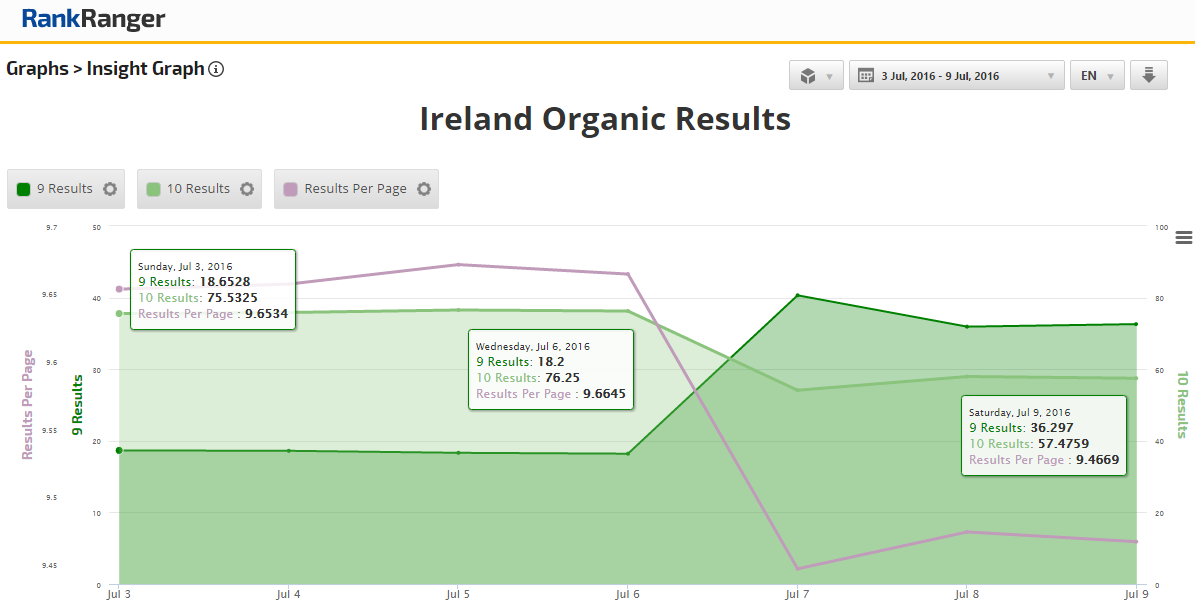 Fig 4. Results per Page, along with 10 Results dip in Ireland as 9 Results nearly doubled last week


If you thought I was done reporting on all of the SERP feature data changes off of last week's Irish SERP, think again, as crazy as that might sound! Indeed, Results per Page fell between the 6th and, you guessed it, the 7th, dropping from an average of 9.66 organic results to an average of 9.45 (which as indicated by Figure 4, is a big deal relatively speaking).  In fact, you'll notice that along with what might seem to be a small decrease in the average number of  Results per Page, the percentage of 10 Organic Results fell over 20 percentage points, while 9 Organic Results more than doubled!

I don't think I need to say much more here, the data speaks for itself.  I simply can't see any way out of saying that there was some sort of Google update/shift that caused this peculiar SERP features data behavior to transpire, but then again I have been wrong from time to time.

AMP Expands in a Variety of Directions

There is not a week that goes by that I don't see some sort of news about AMP. Whether it be someone at Google reaffirming its importance, or a new way to confirm AMP pages, the feature is constantly being discussed. Last week in fact provided some interesting international data in regards to AMP (News Results).


One of the most interesting sets of data related to AMP (that I've seen) came out of Italy last week. The Italian mobile SERP started the week showing AMP in 22.22% of news results. Two days later, on July 5th, the percentage of news results that consisted of AMP pages jumped massively to 35.3%, an increase of 13.1 percentage points. Quite amazingly however, by week's end AMP (New Results) in Italy was at a meager 9.38%, a drop of 22.9 percentage points! Like I side... an interesting set of AMP data out of Italy.

While AMP (News Results) in Italy may have started the week showing a decent percentage of AMP within news results, nothing compares to you "O Canada!" Like Canada's national anthem, when it comes to AMP (News Results) "with glowing hearts we see thee rise."

Fig 6. AMP pages within news results in Canada hit a voluminous high of 43.79% on July 3


Though ending the week at an impressive 36.26% of all news results, AMP (News Results) in Canada began the week at an unprecedented 43.79%! As you can see in the Single Metric Widget  that comprises Figure 6, even when showing two weeks of data, nothing comes close to 43.79%!

Just to put this number into perspective, the highest the very soon to be released Mobile SERP Features Tracker has seen AMP (News Results) in the US was 25%, while in the UK the tracker recorded a high of 29.5%. Oddly enough, the only country that has come even close to 43.79% is Spain, which on July 4th showed AMP pages within 32.26% of news results. In other words, the number seen last week in Canada was over 11 percentage points higher than any other AMP (News Results) recorded on the Mobile SERP Features Tracker.

AMP: A Series of Peaks and Valleys

Fig 7. AMP (News Results) in the US shows a series of data peaks within a 30 day reporting period


The idea of AMP in news results spiking and dropping is really not a new occurrence per se. In fact, if you look at the data over the past month in the US, you'll notice that the percentage of AMP pages within news results tends to show a pattern of peaks and valleys. You'll also notice that the peaks keep getting higher and higher. Just by way of example, on June 14th, AMP (News Results) peaked at 17.78%, while less than a month later the data presented a peak of close to 25%.

My personal prediction, this pattern is going to only continue and AMP data is going to climb exponentially. It will increase because I'm of the opinion, one that John Muller himself hinted at a while back, that AMP is a general formatting construct that is universally applicable. Just take a look at eBay. Recently, eBay, with full encouragement from Google, has created 8 million AMP pages. Remember, eBay is not a publishing site, it's an eCommerce company. Also remember however, that AMP pages load four times faster than pages which are not AMP optimized. Thus, the true benefit to AMP, outside of Google's publication push, is its speed, which of course is not industry specific (and nor will AMP pages be much longer).  With this AMP update we see our last example of how Google's tinkering (i.e. founding of the AMP Project) can reshape the web, quite profoundly!

No Time Left with Which to Tinker

What SERP feature will be next to fluctuate and in which country? How will future SERP feature data adjustments impact you? How have they already impacted you?

Share your SERP data fluctuation experiences with us. You never know, your SERP experiences could end up in the next edition of the SERP Snapshot.