At Rank Ranger we like to think of ourselves as "inventors" who are constantly creating new ways to make our SEO software that much better. In addition to the completely new tools we roll out, we are continuously developing enhancements to our existing ones. As such, we are quite pleased to introduce our Target Rank feature, a new feature that we have added to our popular Rank Tracker.

One of the things we realize and carefully consider when updating our software is that tracking the rank of a multitude of keywords is not as simple as it sounds. In fact, it can be downright difficult to keep track of where you were, where you are, and where you want to be with your keyword rankings. We all obviously want to rank #1 on the SERP, but we also realize that it doesn't happen overnight. Crawling up the SERP gives the age-old adage of 'slow and steady wins the race' renewed meaning. Of course then, setting reasonable and measured goals is important to your overall success. To allow you to set realistic and reachable ranking goals for yourself in a visible and easily tracked manner , we have added Target Rank to the Rank Tracker Dashboard.

Set a Target for Each Keyword

Taking a keyword from position 100 to the top of the SERP is certainly different than trying to move a keyword that is already ranking in the top ten. Setting ranking goals for your keywords is important, and you should be able to do so in a tangible way, but it's not a one size fits all process either. That's why we created the new Target Rank feature that lets you set keyword rank targets that work for you.

Simply set the Rank Tracker Dashboard to display the Target Rank column and type in your rank target for a specific keyword. Once you or a team member have met the target rank, simply set a new Target Rank until your ultimate ranking goal is achieved. In this way, you've set yourself and your team up for success with realistic and segmented goals that you can work with until you're ranking within the "SERP elite."

Setting reachable goals is an important practice for real and long term success, but you should also have the ability to monitor whether the target rank has been reached at the glance of an eye. This why we created a separate column on the Rank Tracker Dashboard for your Target Rank that offers an easy to see, yet subtle, "green flag" telling you that the goal you set has been met. When designing this feature, our aim was to keep the rank targeting process as simple and easy as possible.

As with all the other metrics, we understand that marketing professionals prefer to show results graphically so we also integrated the Target Rank feature within our Insight Graph tool.  Now you can track a keyword's ranking performance over time in relation to a ranking goal that you've set. 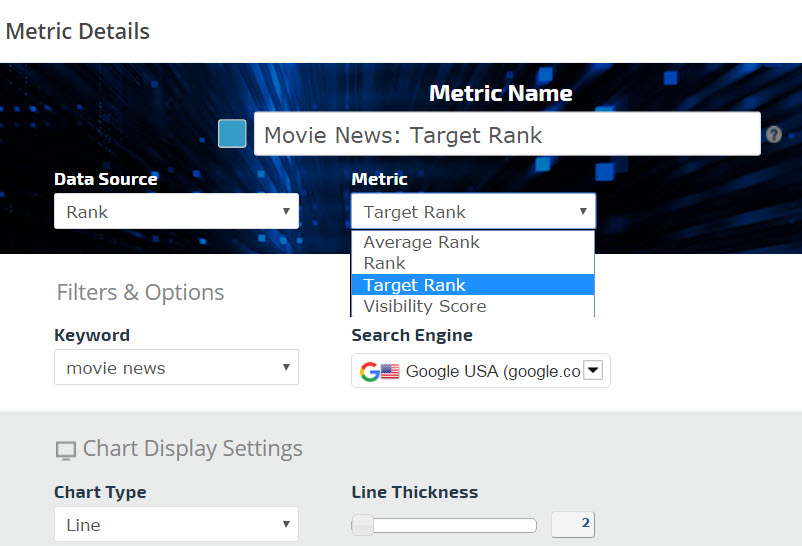 
Perhaps you've hit your target, but are you hitting it consistently or is the ranking volatile? By tracking the rank performance for a keyword on the Insight Graph while simultaneously plotting the Target Rank for that same keyword, you can graphically (and such easily) track your "target trends."

At Rank Ranger, we're constantly re-evaluating how we can make our software more user-friendly and empowering for our users. We know that improvement is a constant process and are always looking for new ways to expand on what we have built thus far. That's why you'll see us undertake a continuing process of new development and updates. It's also why the smaller changes that give you that extra feature or make using our software that much easier are just as important to us a major overhaul or the introduction of some sort of new tool. We know that the manner in which users engage with our software on a day-to-day basis is just as significant as introducing the next best thing in SEO reporting!

Please, of course, let us know what updates you would like to see and how we can make your daily rank tracking that much easier.

Mordy Oberstein
Follow @MordyOberstein
​Mordy is the CMO of Rank Ranger as well as the host of The In Search SEO Podcast. Despite his numerous and far-reaching marketing duties, Mordy still considers himself an SEO educator first and foremost. That's why you’ll find him ​regularly releasing all sorts of original SEO research and analysis!