Try as they may to hide it, but on September 8th, Google rolled out an algorithm update that had a serious impact on Page One rankings. The algorithm was broken into two phases over the course of a week and correlated to the drop off in Page One Image Boxes.

As the first week of September passed, the SEO community was replete with chatter that Google had rolled-out an algorithm update. Between September 8th and 14th, there were five days with elevated SERP fluctuations. While it was evident to us that something was being rolled out, we still had yet to identify exactly what was going on and how deep of an impact there was. 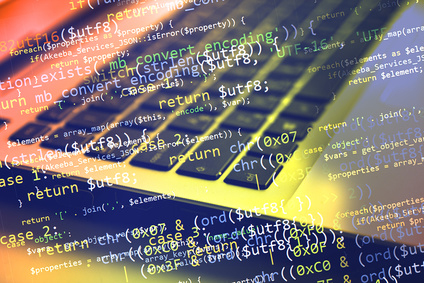 At the time, Google would not officially say if indeed there was an algorithm update altogether. In fact, reports came out that Google was even downplaying the notion that there was a significant update. However, with some grit, determination, and bit of elbow grease the Rank Ranger development team and I gained clarity as to the nature of an important part of September's algorithm updates. I say "part" and "updates" in the plural because in the first half of September Google released several updates – one was a Local Search update nicknamed Possum by the SEO community and another was an update to Google's Penguin algorithm.

A Quick Summary of Our Algorithm Discovery

The data below is based exclusively on those keywords that previously triggered an Image Box on the Page One SERP.

A Prolonged Set of Rank Fluctuations

One of the most effective tools we have in tracking Google's updates is measuring rank fluctuations. Our tool in this process is the Rank Risk Index, which tracks SERP fluctuations across over more than 10,000 domains and keywords. Between September 8th through the 11th the index showed elevated levels that paralleled some of the talk within the SEO world. On the surface, it would appear that indeed some sort of algorithm was being released. At this point however, while we knew something was going on (courtesy of the Rank Risk Index), we still needed to qualify it (which is of course the tricky part).

One of the major shifts on the SERP recently was the removal of more than 50% of Page One Image Boxes. Between September 13th and 14th our SERP Feature Tool showed a steep drop-off in the percentage of Page One SERPs that displayed an Image Box. This in and of itself stood out like an elephant wearing a clown wig at an official State dinner. However, when we compared Image Boxes' September performance to the average number of organic results on desktop during the same period, we saw an incredible inverse correlation between the two metrics:

First it would appear that the update to Image Box really began between September 8th and 9th with a much smaller dip relative to its second drop off. Not only that, but there was an inverse relationship between Image Box and organic results which followed throughout the algorithm's roll-out. As you can see, just as Image Box leveled off so did the number of organic results per page. That is until Image Box spiked between September 12th and 13th before falling off a cliff by the 14th. Notice that the average number of organic results per page did the exact opposite, deceasing as Image Box increased and spiking exactly when Image Box dropped-off.

Most importantly, this simultaneous data shift of the two metrics directly corresponds to the increase in SERP volatility shown on the Rank Risk Index. As such, we saw that there was an intrinsic relationship between the data shifts that Image Box and results per page underwent and the actual ranking fluctuations caught on the index.

The Relationship Between Image Box and Rank Changes

Fantastic, so there's some sort of correlation between ranking fluctuations and Image Box falling off of Page One, but what is it? How does this story play itself out? What exactly happened?

When we first saw that Image Box was being taken off Page One of the SERP we did a deep data dive as to why did Google remove 50% of image boxes From Page One. What we found was that in a large number of cases, results that had previously brought up both a Page One Knowledge Panel and Image Box were now displaying with the Image Box on page two.  The natural assumption of course is that with Image Box off of Page One, Google would take the top one or two results from the SERP's second page and place them on Page One. In such a scenario, a site might now be showing on page One, but without seeing any change in numerical rank because the number of Page One results increased with the removal of the Image Box. 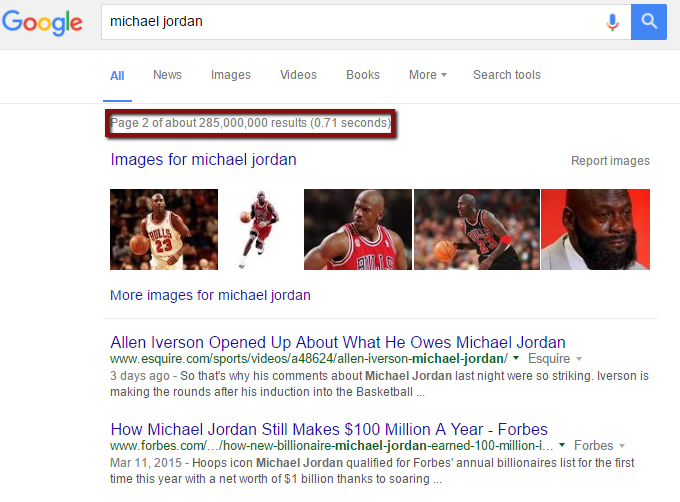 
This would make a great deal of sense except that we were seeing a prolonged series of rank fluctuations that ran simultaneous to the Image Box shifts. In plain English, it seemed that Google was not simply taking the top results from page two and placing them on the now more spacious Page One. Rather, we theorized that Google was using the opportunity of a less filled Page One to update rankings altogether. A theory that turned out to be true.

A Serious Shift in the Rankings

We took a random set of keywords whose only commonality was that prior to the decrease of Page One Image Boxes, each keyword resulted in the display of an Image Box on Page One of the SERP. What we found was that there was a significant number of results that were removed from Page One and replaced with new organic results, many of which had not even ranked in the top 200 results previously. 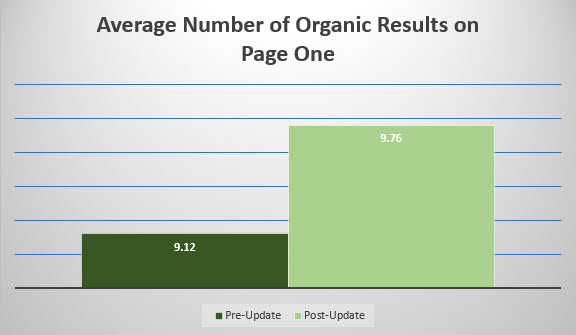 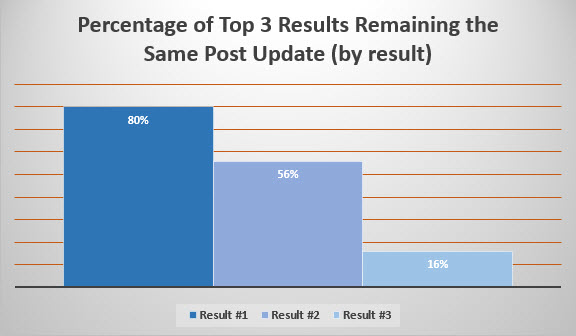 Only 16% of results that previously had an Image Box on Page One of the SERP, appeared in position three before, as well as after, the algorithm update. 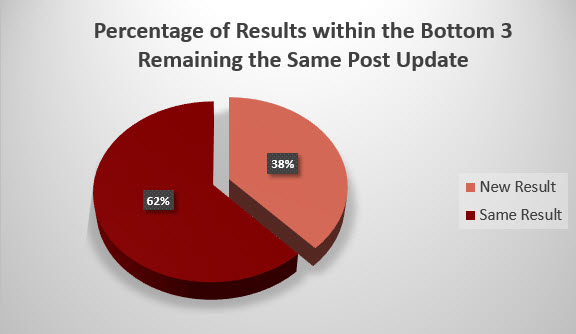 Post-algorithm, 38% of the bottom three results on Page One did not appear as such prior to the update (when an Image Box previously appeared on Page One)

On to the heart of the issue: our data shows that 36% of results currently displaying on Page One were not present prior to the algorithm update that removed Images Boxes from the first page of results. 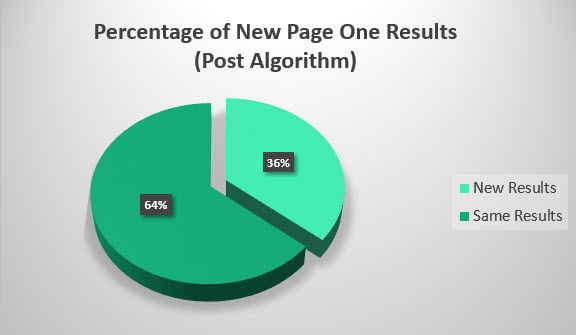 
Here's where it gets a little interesting. Of those results that are now, but were previously not on Page One:


Now here's what's really surprising, a whopping 48% of the results that now appear on Page One, but did not when Image Box was present, either previously ranked beyond page 10 or did not rank in the top 500 search engine results.

Interestingly enough, about 35% of the keywords we ran displayed with either 11 or 12 results on Page One, i.e. with in-depth articles, which we consider and count as organic results, as they for all intents and purposes appear as such. Thus, some of the new Page One results come from far-fetched and previously uncharted Google territory. 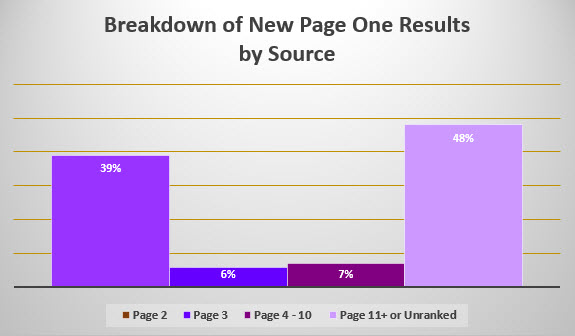 While 39% of the new Page One results came from Page Two of the SERP, 48% either were previously not ranked or were ranked beyond page 10


A Change in Related Search Listings 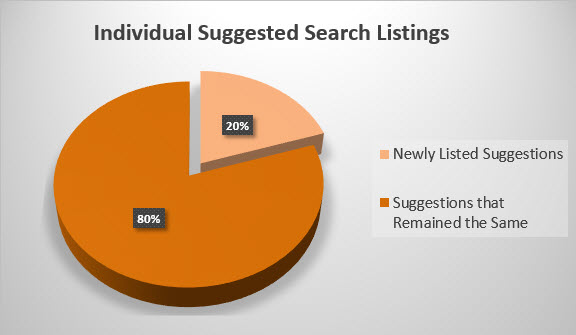 Google essentially admitted there was an update, but were evasive. The update consisted of two segments spread out over the course of a week. The algorithm update brought about a simultaneous drop off in Page One Image Boxes and an overall increase in the average number of Page One organic results. The first segment of the algorithm roll-out was smaller than the second, as indicated by the grade of Image Boxes' downward slope. The second phase, which started on September 13th, was when the algorithm update went into full effect, after having stabilized for roughly four days. 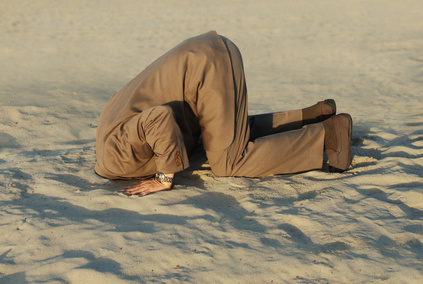 The effects of the algorithm update on Page One ranking was significant. On Page One SERPs that displayed an Image Box prior to the update, 36% of the current results were not ranked on Page One previously. An astounding 48% of these results were not even listed on the first 10 result pages prior to the update. In fact, while 80% of the results in the first position on the SERP stayed the same, only 16% of those in the third spot remained consistent pre- and post-update.

Bottom line, the removal of Image Box from Page One of the SERP was not merely cosmetic, there were deep ranking shifts as well. Contrary to the intuitive belief, when Image Box migrated, the top results from Page Two did not replace the SERP feature. Instead, a ranking shakeup took place with deep results brought forward to the top of the Page One SERP.