Google is Replacing Video Thumbnails with a Desktop Carousel

In what was all but one fell swoop, Google has largely done away with Video Thumbnails on the desktop SERP. In its place, the search engine is favoring a video carousel that has until this point been mainly relegated to mobile. Perfectly merging two worlds, the move over to the carousel not only offers a new look for the desktop but brings a whole host of implications for both sites and YouTube creators alike.

Let's have a look at what exactly is going on.

Desktop Video Thumbnails have historically been a relatively stable feature on the Google SERP. Even when there was either a reduction or increase, the new trends tended to last for months upon months with little volatility in between. As of June 15th, we can throw that paradigm out the window as Video Thumbnails have all but disappeared from the desktop SERP according to our SERP Feature Tracker:

The initial decline began on June 14th as the SERP feature began to slightly taper off moving from showing on 10% of all page one SERPs to just over 8%. By the 15th, however, Video Thumbnails had fallen to the point where they appeared on just .8% of all page one SERPS, a mighty 92% loss.

The dropoff becomes even more pronounced when looking at the number of keywords in the dataset that scored the feature since the beginning of June: 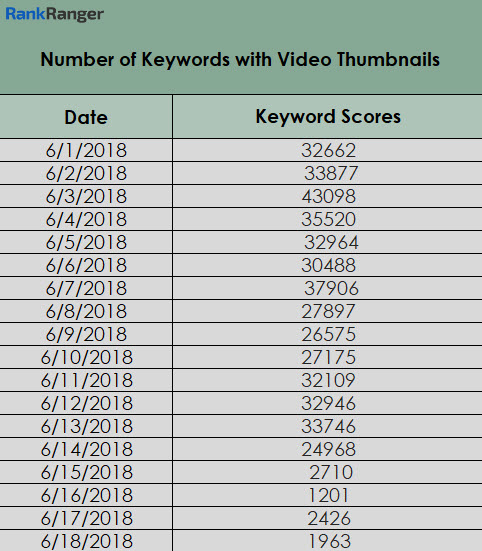 As is obvious, there was a marked reduction in the number of scoring keywords recorded on June 15th. That level has remained fairly stable to date.

The data here is a bit deceiving, as it would appear that when it does still show the Video Thumbnail, is purposefully showing more of them on the page. I pulled 450 keywords at random from our 500K SERP feature keyword dataset and found that this is most likely not the case at all. Instead, it appears that many of the keywords that still score the feature tend to be those that contain a large number of Video Thumbnails. Meaning, the average has increased not because Google is adding more thumbnails to scoring pages, but because lower volume hits have been removed from the data pool.

Here's a look at 100 of the keywords I pulled on June 12th (before the removal) and on the 19th (after the removal), you'll notice that there are far more keywords scoring larger amounts of thumbnails on the 18th than on the 12th:

As I mentioned earlier, Google has not simply removed the vast majority of Video Thumbnails, rather it has replaced them with a video carousel. We've been tracking the new format since just June 18th, but the data is already telling. Here's the number of keywords scoring the new video carousel as well as the percentage of page one SERPs they appear on within our dataset:

Across the two-day period, an average of 8.5 appeared in the video carousel.

When comparing the data on the new carousels to Video Thumbnails, the former appears on 40% more and is applicable to roughly 25K more keywords within the dataset. Meaning, the video carousel has not only all but replaced Video Thumbnails, but is bringing "video" to all new SERPs for all new keywords.

That Google is swapping thumbnails for carousels makes a great deal of contextual sense as news that Google was testing the video carousel on desktop recently broke in early June.


Breaking Down the Video Thumbnail Drop-off

In order to better understand the above data, I pulled a series of keywords that have lost their Video Thumbnails only to have them replaced with the carousel format. Below you can see that there were sporadic losses since at least June 10th that become fixed on the 15th for the majority of keywords:

Below is a general sample of some of the keywords that have had their Video Thumbnails replaced with the video carousel:


At the same time, Google has not removed every instance of a keyword producing Video Thumbnails. Below are some keywords that at the time of this writing still produced the SERP feature:

When looking at the data on the new video carousels, I was curious how the new format impacted the SERP feature bidding system. That is, do the new carousels compete with other SERP features for real estate on the page?

According to my findings, there seems to be absolutely no competition between the carousel and any of the other SERP features. The video carousels solely compete with organic results for SERP space and can appear next to any combination of other features. 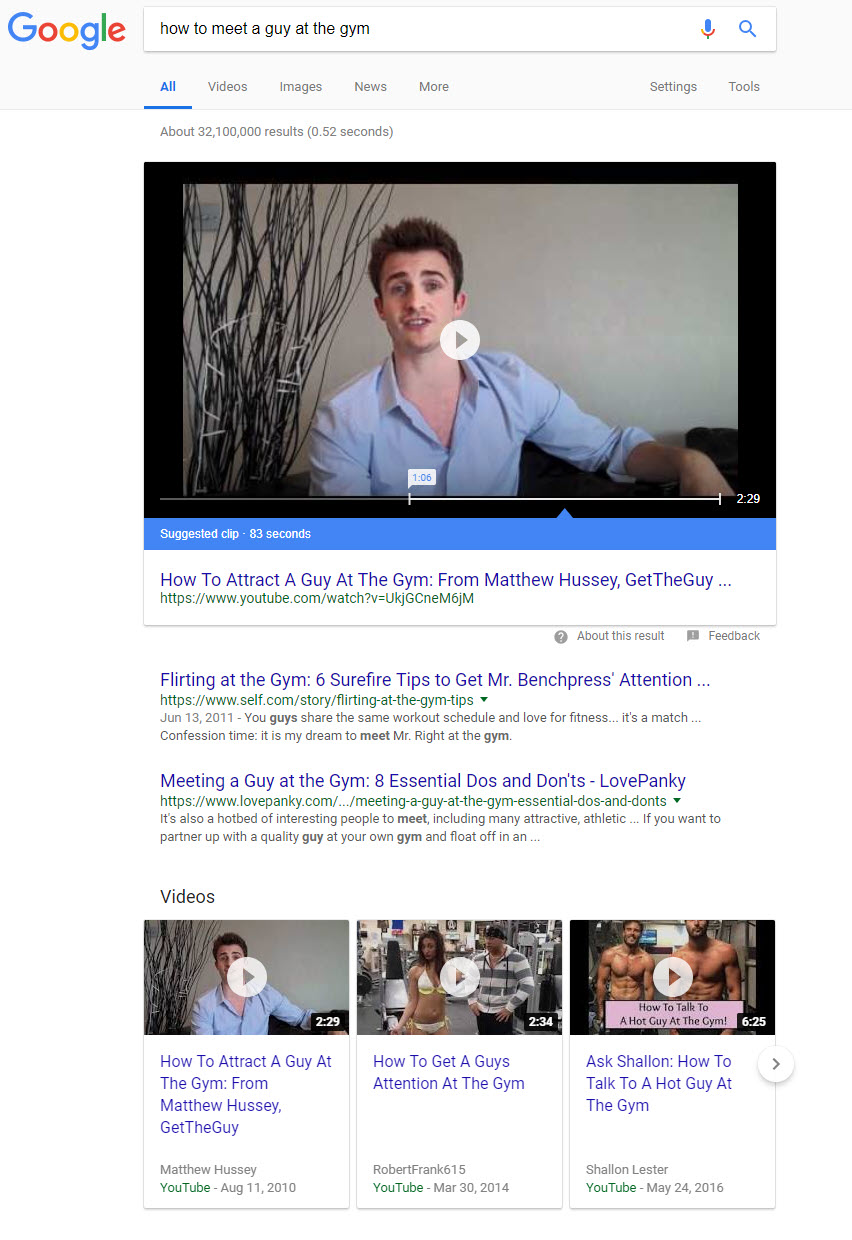 Other keywords that produce both video carousels and Featured Snippets are: 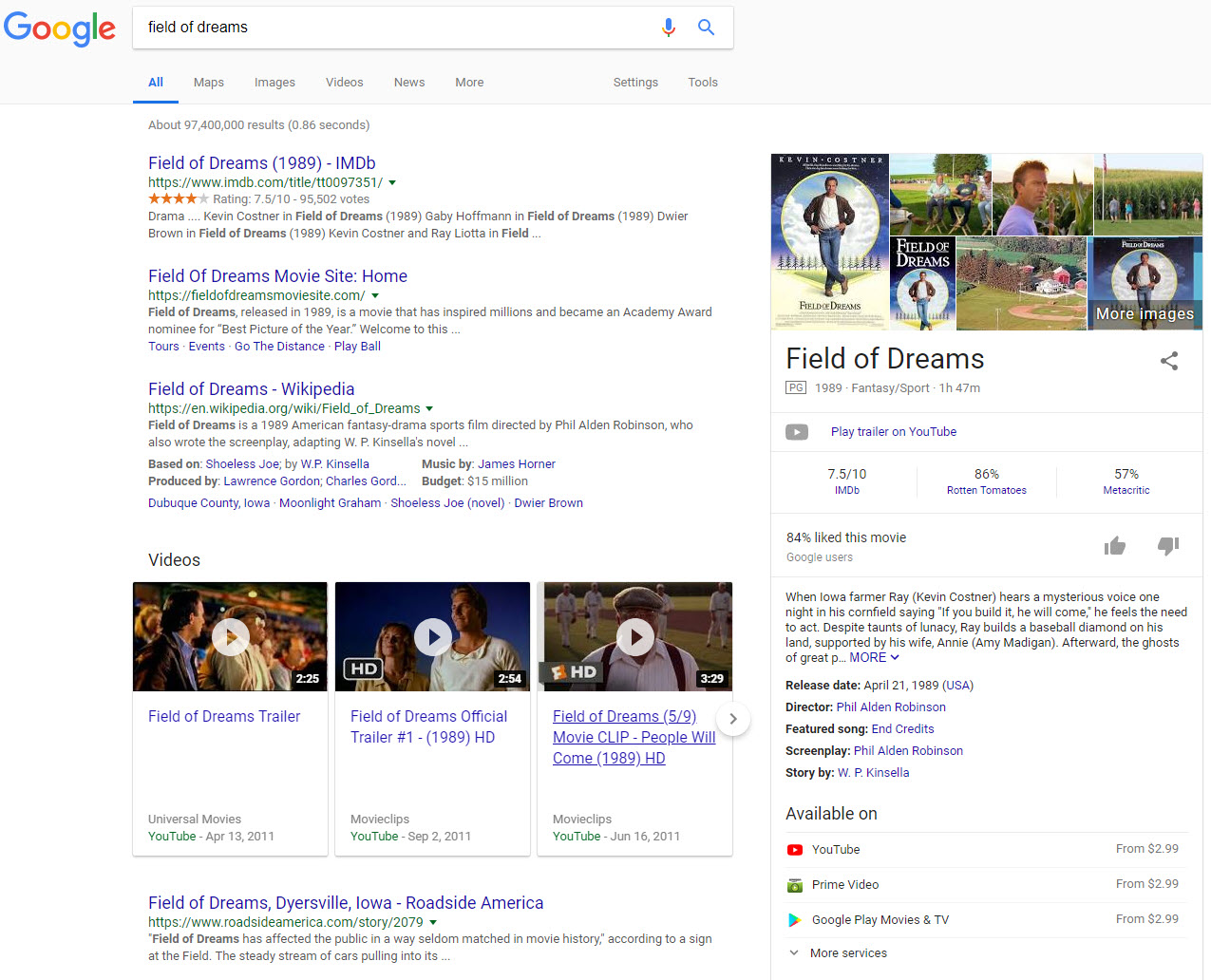 With a top carousel: 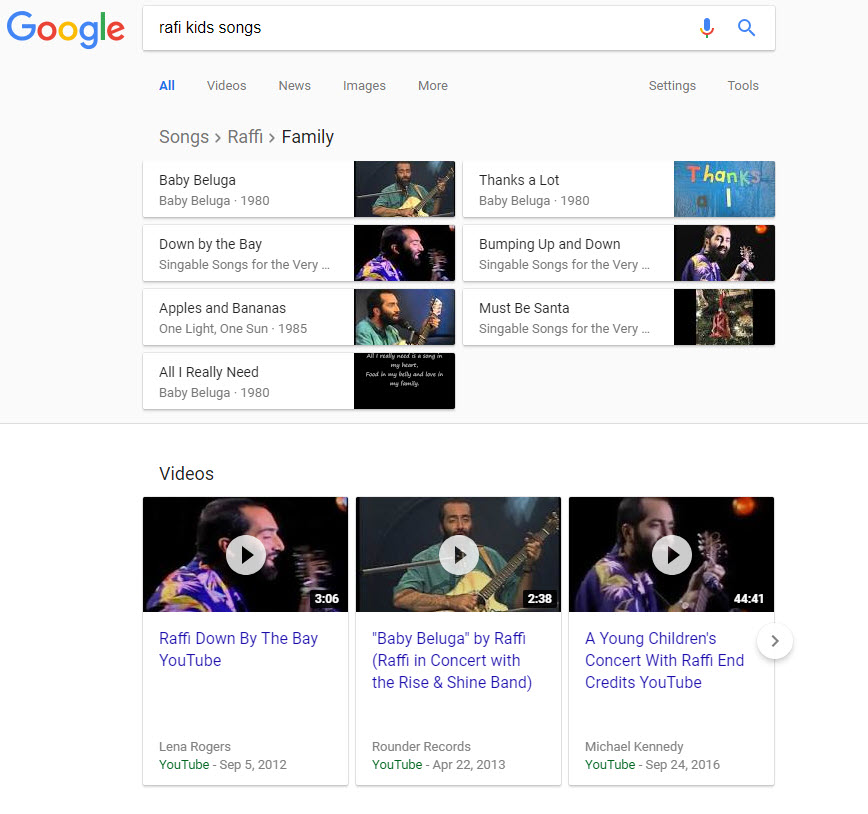 With both a Knowledge Panel and Top Carousel: 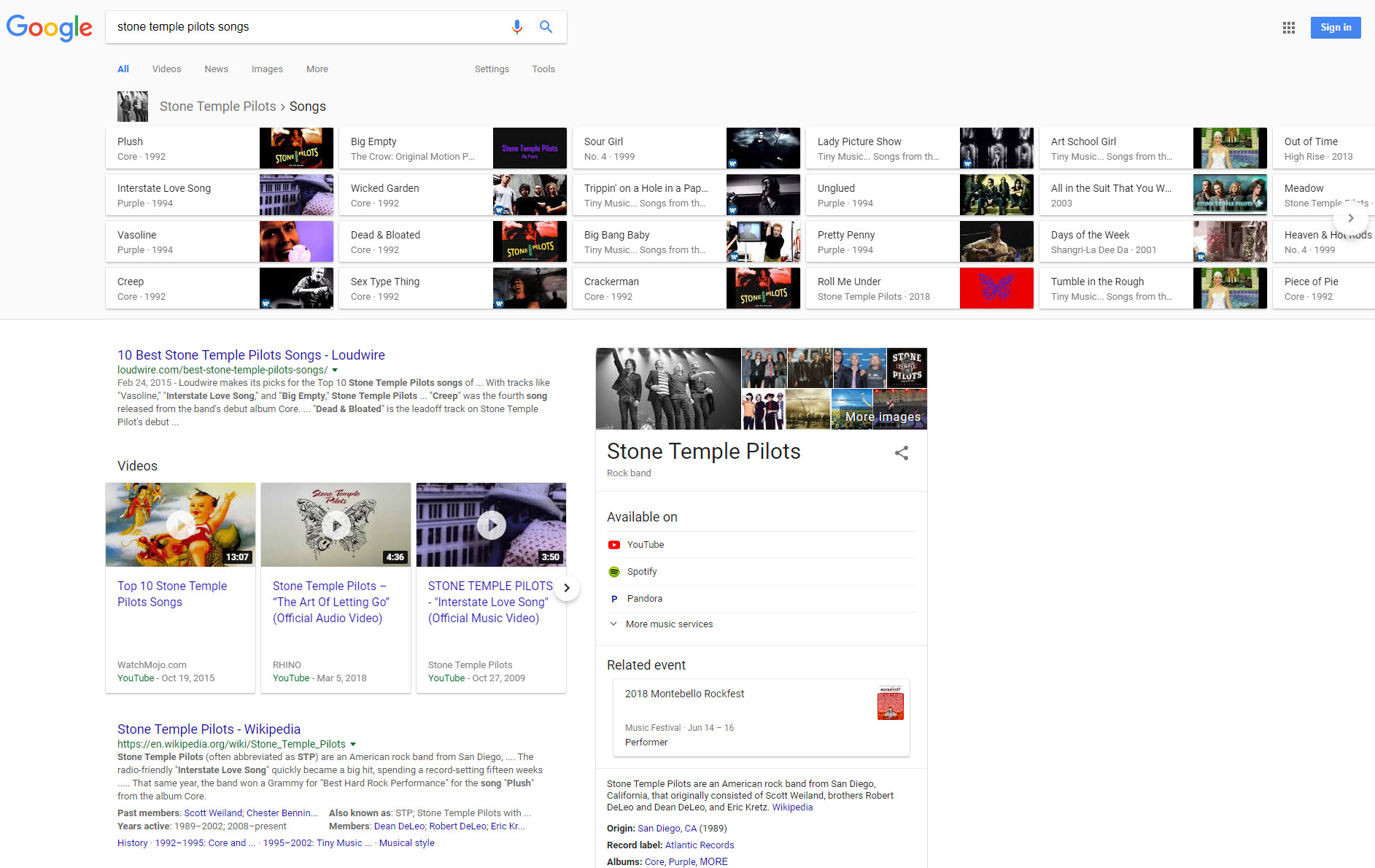 You can even find the video carousel on the same SERP as a Local Pack: 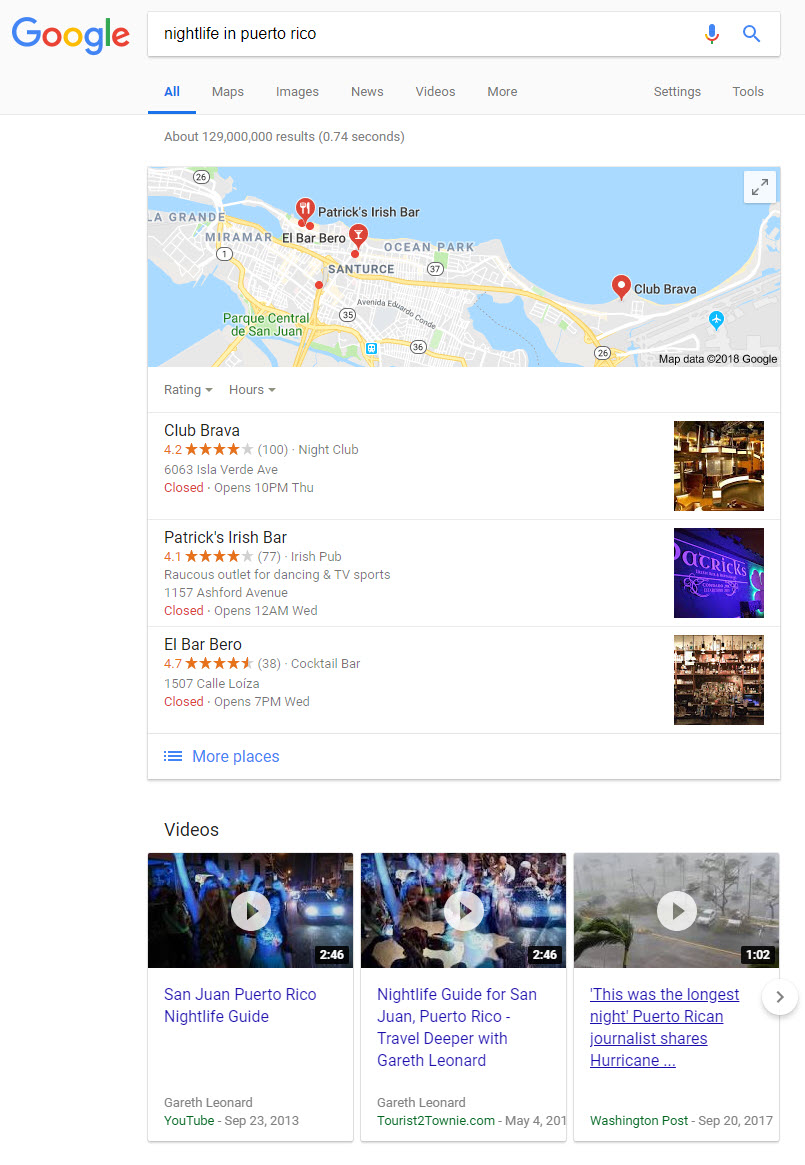 Which URLs Appear in the Video Carousel?

When it came to the vast majority of Video Thumbnails, the accompanying URL was from YouTube. The same holds true for the new desktop video carousel, though it is not a rule that is set in stone. When undertaking the research for this post, I came across multiple instances of carousels that contained links to sites other than YouTube, even within the initial three cards.

Some search queries are: 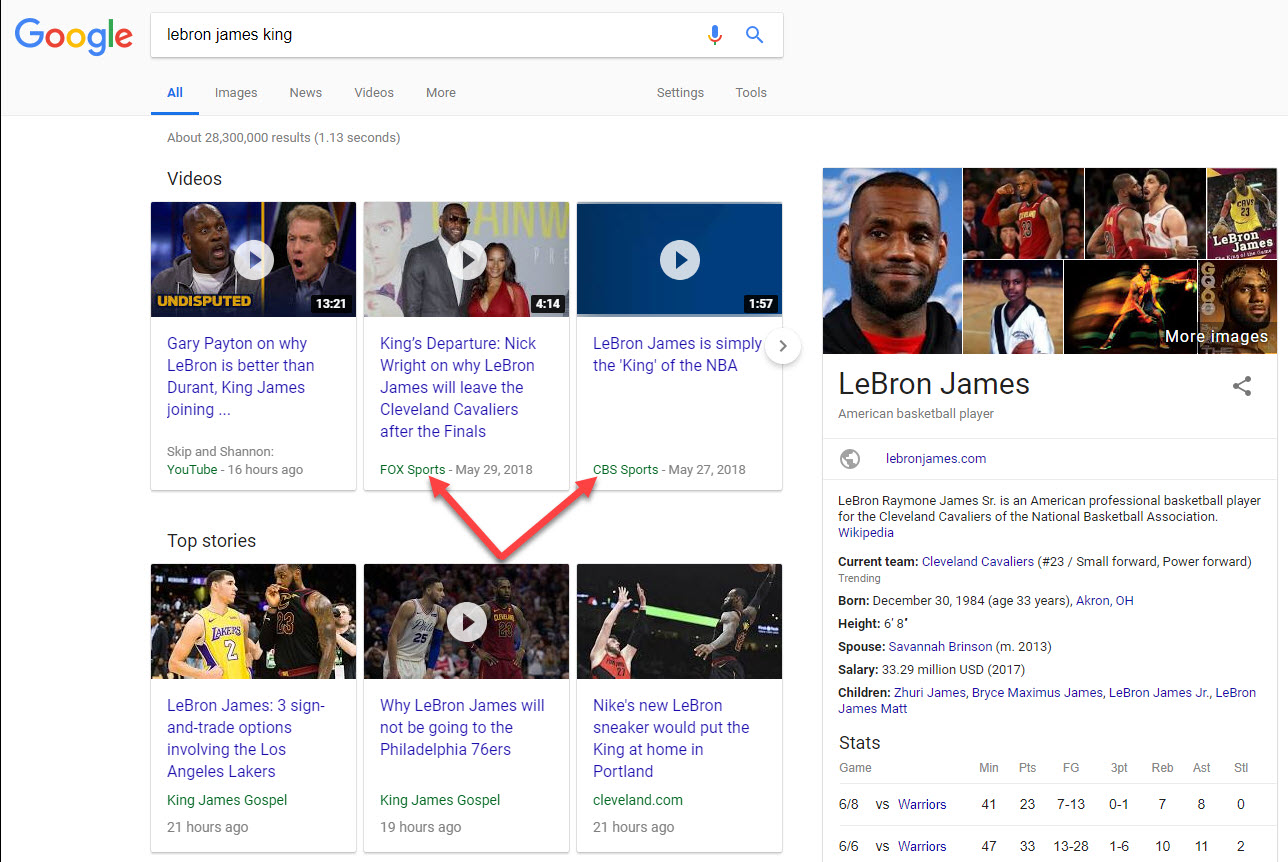 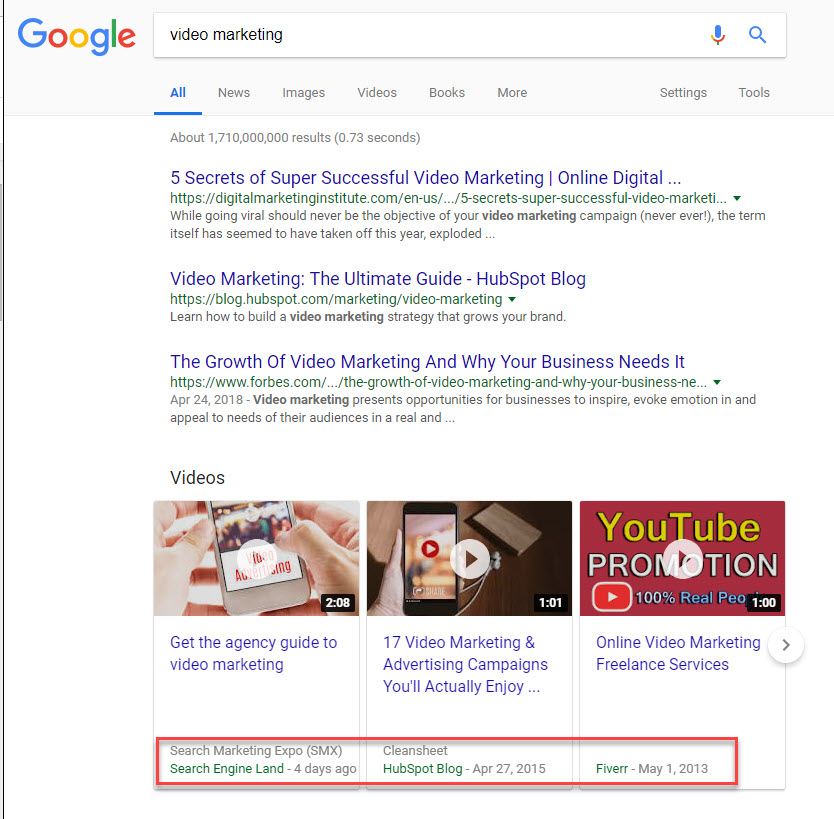 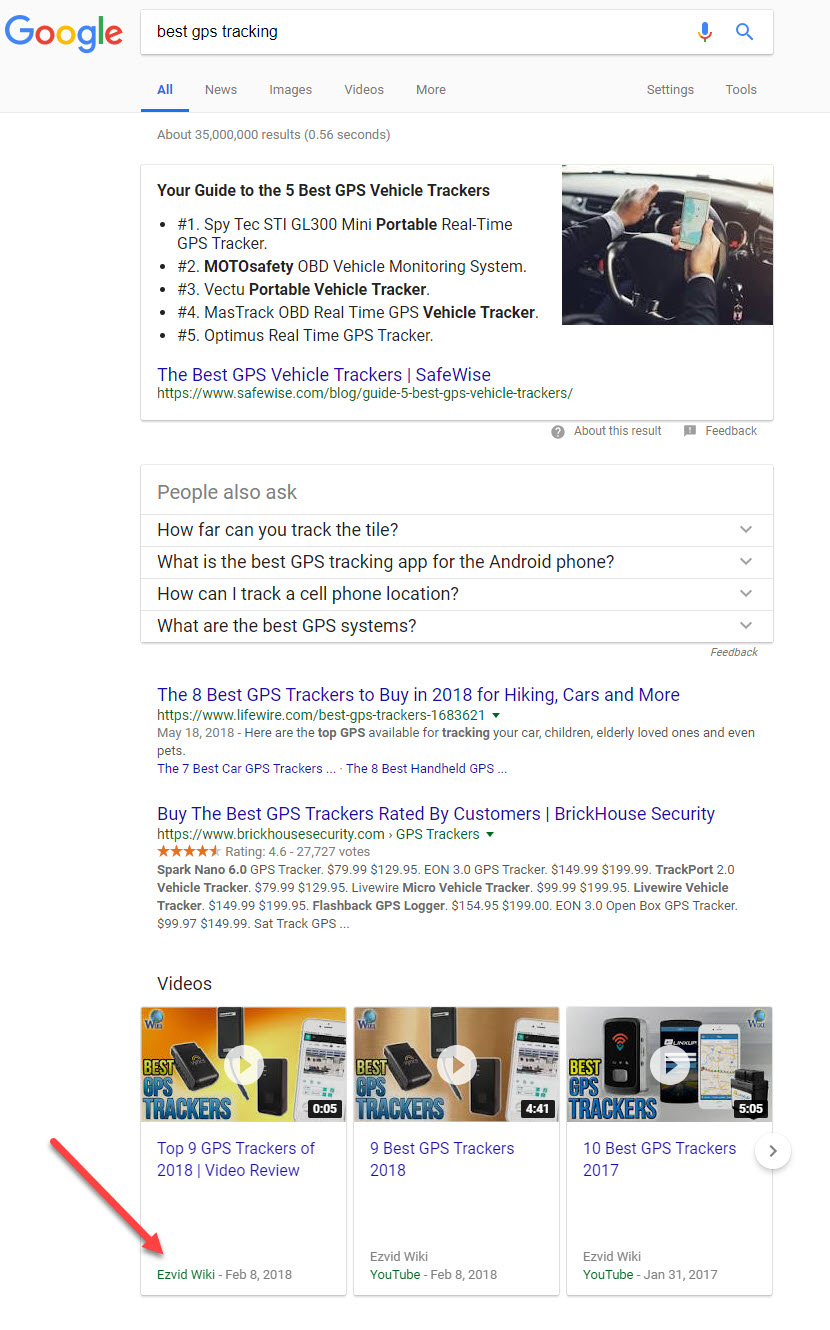 When Video Thumbnails Do Appear

As mentioned, there are still instances where video Thumbnails do appear. Oddly enough, and in line with my earlier point around SERP feature bids, the video carousel does not preclude the thumbnails from appearing on the same SERP.

In fact, I found multiple cases where the two features appeared together: 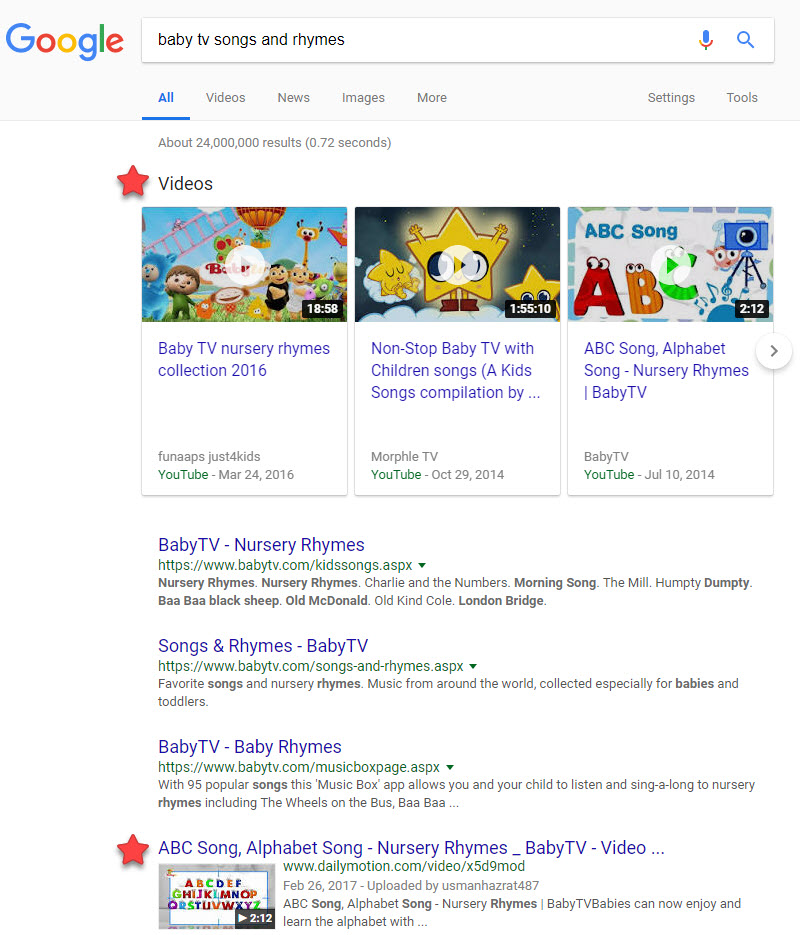 That said, there were keywords that showed both Video Thumbnails and the video carousel on June 18th that now only show the carousel, so I am not sure if these keywords are simply on their way towards losing the thumbnails altogether. Still, the point remains true, both SERP features can appear simultaneously, which is interesting.

When Video Thumbnails do present themselves on the SERP, YouTube URLs are still present. Meaning, the video carousel is not a complete migration of YouTube out of the Video Thumbnail: 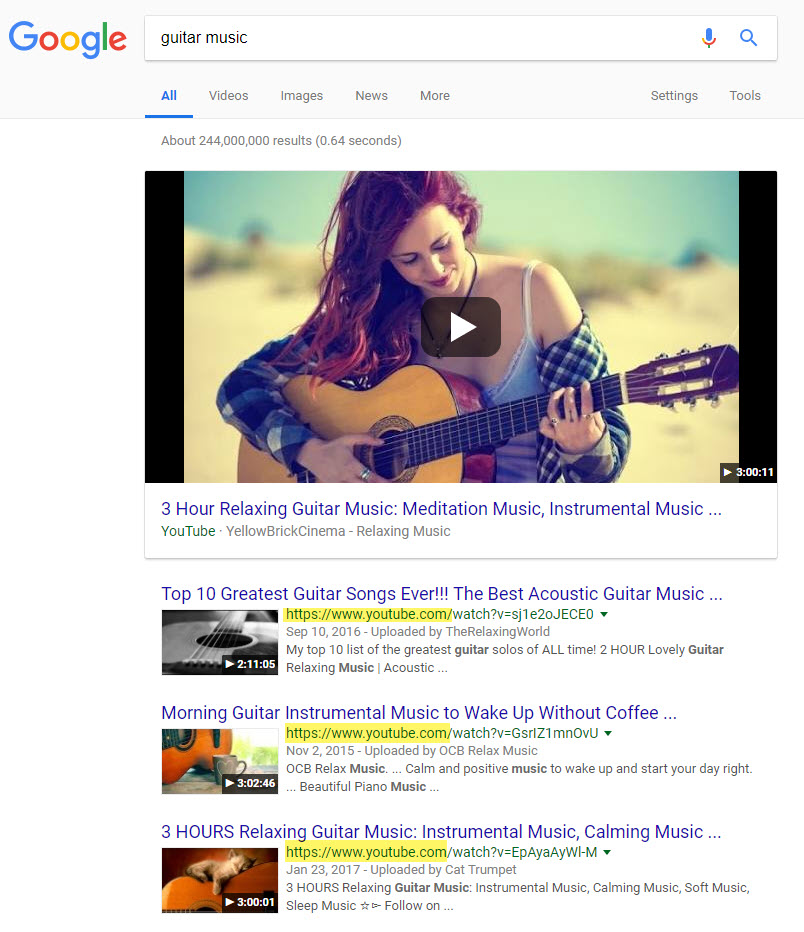 My initial sense, however, is that when a keyword does produce Video Thumbnails, there is an increased opportunity for sites other than YouTube to score the feature (as opposed to previously when YouTube entirely dominated the field): 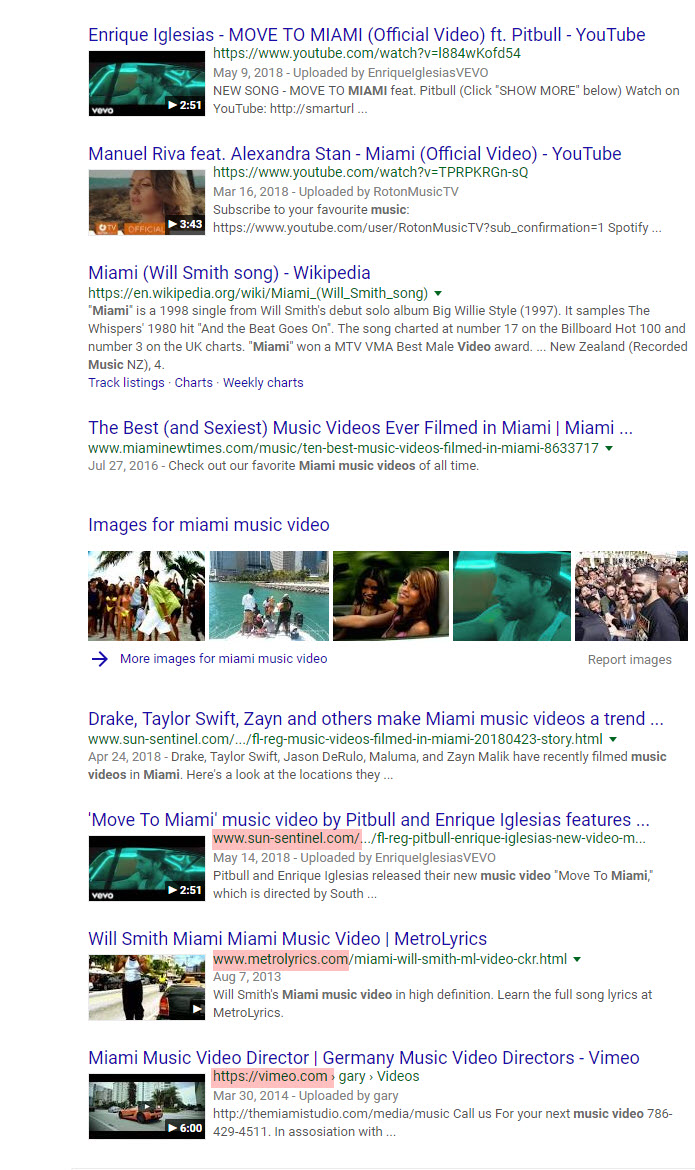 That said, I've noticed that YouTube's Video Thumbnails predominately show towards the top of the SERP, whereas other sites tend to appear on the bottom half of the page: 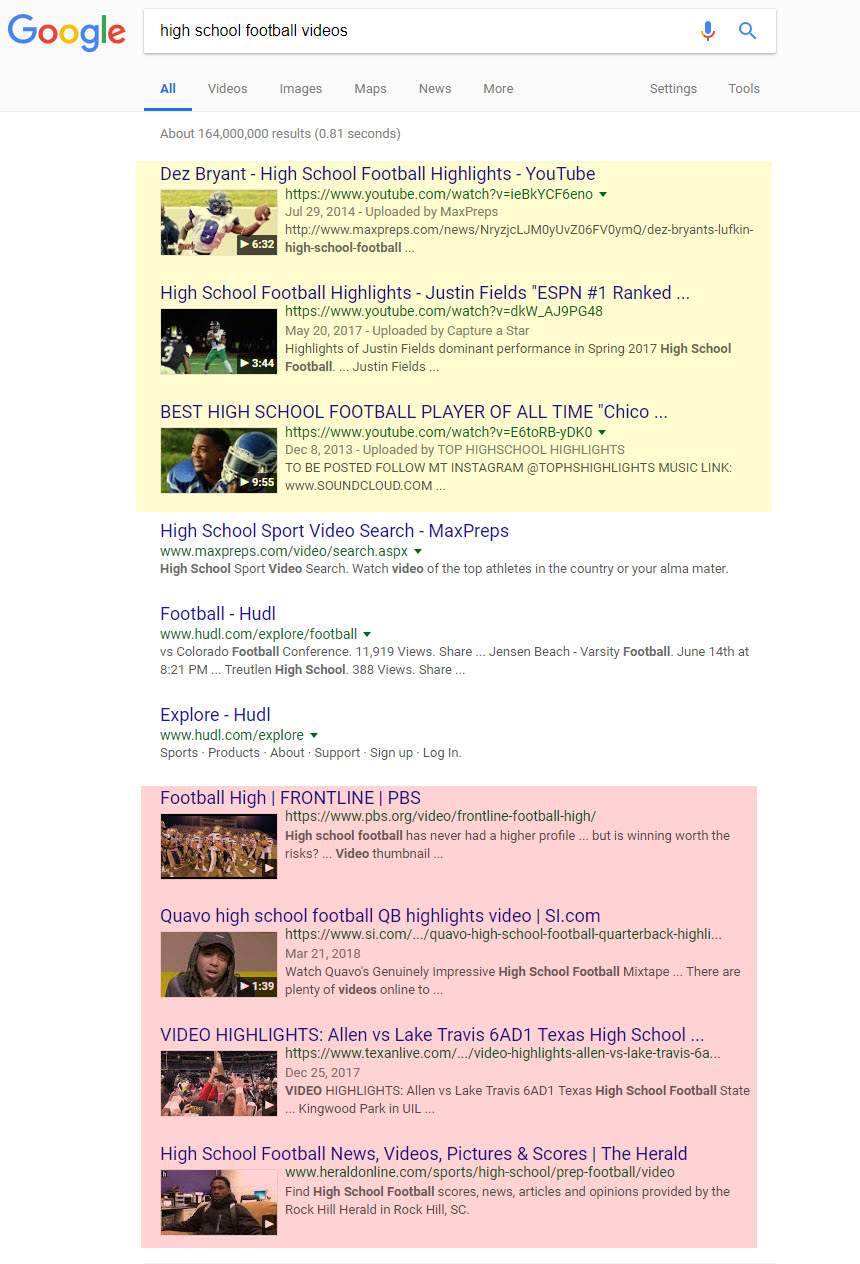 Who Wins and Who Loses with the Video Carousel?

Essentially doing away with Video Thumbnails in favor of the carousel is a self-evident "bid deal." That said, who stands to gain the most and who faces some possible tough times ahead as a result of the change?

I ran some data on YouTube's visibility and average rank pre and post carousel. What I found was an enormous visibility reduction of roughly 2,000 points across 10 niches, a 62% visibility loss.

At the same time, the average rank of a YouTube URL did not change significantly, down just a position or so after the carousel started to appear on the SERP.

What this means is, when YouTube does show an organic URL, its rank is generally the same, rather what has changed is the number of instances where a YouTube URL ranks on page one.

As such, the biggest losers are those YouTube channels/creators who previously ranked on page one, most likely with a Video Thumbnail, but now do not appear within the first three cards of the new video carousel.

In other words, let's assume that the first three cards in the new video carousel rank as such since they are the most relevant videos available. If so, what are the chances of a user scrolling through the carousel versus simply choosing to view one of the first three options? The result is a major loss for those video creators whose content previously ranked well on the SERP, but are now relegated to card 4 and beyond in the carousel.

At the same time, while the video carousel, like the many other SERP features like it, is highly visible and will likely garner a high percentage of clicks on the SERPS on which they appear, does create new opportunities for sites other than YouTube to rank among the top organic results.

Consider that previously the first page of the SERP was literally filled with pretty much only YouTube URLs. With the new carousel that is not the case, as these URLs have in a sense been "transferred" to the new carousel. The result is space that must be filled on the SERP, which gives new opportunity to sites that were precluded from the top organic results as a result of YouTube URLs. Of course, this opportunity is limited by the carousel itself, which as I mentioned is the most visible video element on the page. Still, some chance is better than no chance.

With the advent of the video carousel and the subsequent dramatic Video Thumbnail reduction, how have you been impacted? If you're a YouTube video creator, has the change meant more views or limited exposure? For those of you hoping to rank organically, has the carousel's appearance produced a bump in some of your rankings? If so, has it actually meant more traffic, or is the impact left on the SERP and relegated just to a jolt in your site's visibility?

I'd love to hear how the new carousel has impacted you! Let me know!