Throughout the year Google is constantly making updates to their algorithms, and that causes rank fluctuations in the search results. So far In 2019, Google has already rolled out several confirmed core algorithm updates.

Below you’ll find an up-to-date summary of the confirmed and unconfirmed updates with additional resources and links to help you better understand the nature and impact of these changes.

Unconfirmed Update
On August 13th the Rank Risk Index picked up massive fluctuations on both mobile and desktop which continued the following day.

Confirmed Update
On July 26th, Google announced that they began rolling out the Link Spam update. The update is designed to broadly identify and nullify spam across multiple languages.

The Rank Risk Index only reported an increase in fluctuations on the 29th which disappeared the next day.

Confirmed Update
On June 28th, Google announced on Twitter, that they had released part two of the spam update. Google also confirmed that the update took one day to complete.

The Rank Risk Index did not report any unusual ranking fluctuations.

On the same day, Google announced on Twitter that a spam update had been released and confirmed that it was completed that day.

Confirmed Update
On June 15th, Google announced on Twitter that the Page Experience update begun slowly rolling out. Google stated in the tweet that the update would be completed by the end of August.

In keeping with the slow nature of the update, the Rank Risk Index showed a record low level of fluctuations on the 15th.

On May 23rd Barry Schwartz of Search Engine Roundtable reported massive fluctuations that occurred on May 22nd and noted that the industry chatter did not match the levels of fluctuations.
Rank Risk Index - Desktop Version
April 2021

Unconfirmed Update
On April 30th the Rank Risk Index reported a large spike in rank fluctuations. The fluctuations peaked the next day and fluctuations returned to normal on May 2nd.

On May 3rd, while reporting industry chatter, Barry Schwartz of Search Engine Roundtable speculated that the update had an impact on the Product Reviews Update.

Unconfirmed Update
On April 23rd, the Rank Risk Index began tracking a moderate increase in rank fluctuations which carried through to the 24th. The update affected both global web search results and local search results.

Confirmed Update
On April 8th Google announced the launching of the Product Review update which is specifically focused on product review content.

Fluctuations resumed on April 15th and died down on April 18th on both Desktop and mobile.

Unconfirmed Update
On March 10th, the Rank Risk Index reported an increase in Google SERP fluctuations on both mobile and desktop. The fluctuations peaked on March 13th and concluded on March 14th on desktop and March 15th on mobile.

Confirmed Update
Starting on February 9th, the Rank Risk Index began tracking a massive spike in rank fluctuations on both desktop and mobile that carried over to February 10th. Google confirmed on Twitter that Passage Ranking went live on February 10th for queries in the US in English.

On February 12th Barry Schwartz of Search Engine Roundtable reported that Passage Ranking went live in the US and that surprisingly chatter was low after February 10th.

Confirmed Update
Starting on December 1st the Rank Risk Index began tracking an increase in rank fluctuations on both desktop and mobile. This carried on until December 4th where there was a massive spike in SERP volatility. Fluctuations returned to normal on December 5th.

On December 3rd, Google announced that there would be a core update later that day. The announcement corresponds with the sudden spike in fluctuations that happened on December 4th.

Unconfirmed Update
On August 15th, the Rank Risk Index reported a dramatic increase in rank fluctuations on both desktop and mobile. Fluctuations reached an unprecedented risk level of 130 on August 15th and 119 on August 16th. By the time the update was complete, the dramatic rank changes were generally reverted.

Confirmed Update
On May 4th, 2020, Google’s Danny Sullivan announced that the search engine had started to roll out its second core algorithm update of the year.

Dubbed the May 2020 Core Update, the bulk of the release spanned just two days with the initial roll-out being tempered. As shown on our Rank Risk Index, the second day of the update’s roll-out produced far more rank volatility than first day of the update.

Per our data analysis, the update was unique in that it produced a rather uniform amount of rank volatility across all niches. 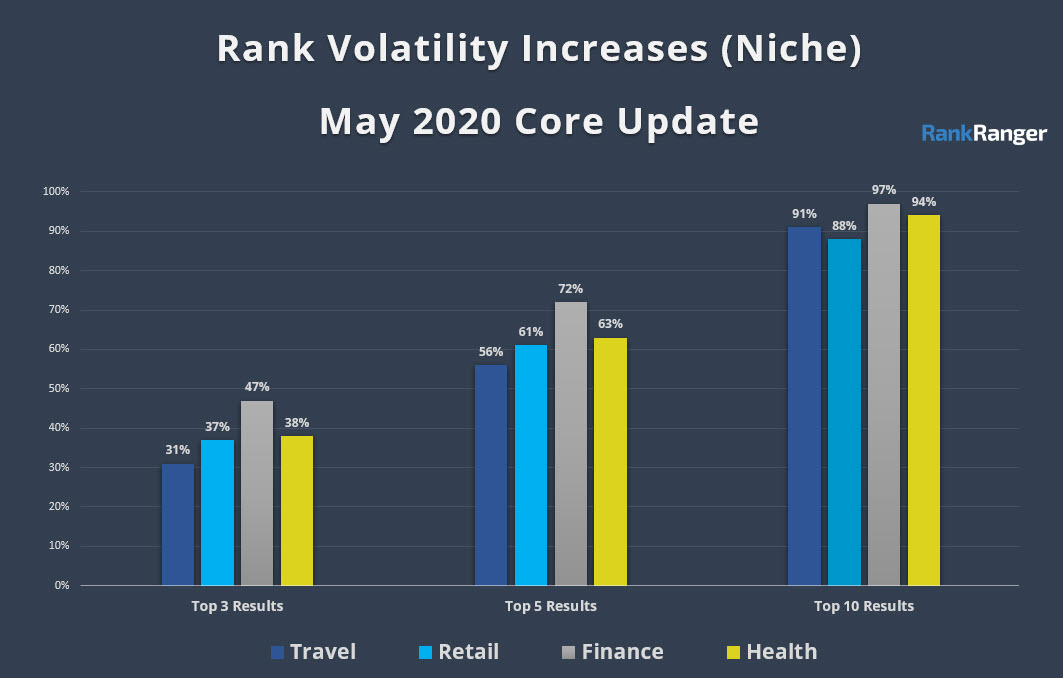 Further, the update was large in scope and size as the levels of rank volatility slightly edged out the January 2020 Core Update which was known for its large impact on the SERP.
Rank Risk Index - Desktop Version
March 2020

The timing of the increases seems to correlate to COVID-19 becoming an official pandemic. In fact, our research indicates that on March 11th, the day that COVID-19 was labeled a pandemic by the WHO, Google made significant ranking changes to COVID-19-related keywords. Further, there was a clear and noticeable pattern vis-a-vis "COVID-19 keywords" that paralleled the various updates during this period. The same pattern was not evident within other keywords subsets.

Search Engine Land hosted a panel of experts on the issue of COVID-19's impact on search behavior and potential affect this may have had on Google's algorithm. As our own Mordy Oberstein noted during the panel, "[COVID-19] is a developing story that Google has not really seen before and it keeps spreading in all sorts of directions... and because Google is so good at making connections it (COVID-19) impacts so many different areas.... Google is trying to figure out how far does COVID-19 reach and how accurate are we (i.e., Google) based upon what's going on."
Rank Risk Index - Desktop Version
February 2020

Unconfirmed Update
On February 8th, the Rank Risk Index began recording significant increases in rank fluctuations that lasted for a total of six days. At their peak, the fluctuation increases hit a level of 94/120.

Along with the increases tracked by our SERP weather tool, a significant amount of industry chatter pointing to a powerful update was reported by Barry Schwartz of SERoundtable.

An initial investigation into the update showed numerous "reversal patterns." To that, many sites who were hit by the update initially saw a quick return to normal while some sites hit by the January 2020 Core Update underwent a reversal.

Along with the change, Google has also announced that the Explore Panel, a hybrid between a Featured Snippet and a Knowledge Panel, will start to appear within the SERP's main column, not to the right of the results as they were placed previously. This change specifically addresses concerns from within the SEO industry that the CTR of Explore Panel links will dwindle with the removal of said links from the organic results.

These alterations to the SERP have resulted in the industry considering Featured Snippets to be "position 1" and no longer "position 0." Such a construct has far-reaching consequences, among them how to properly track rank for the top position on the Google SERP.

Confirmed Update
On January 14th, and per Google's advanced notice, the January 2020 Core Update began to roll-out. The initial levels of rank fluctuations caught on the Rank Risk Index presented extreme levels of rank volatility on both desktop and mobile.

As the update continued to roll-out over the coming days, rank slowly began to stabilize before finally returning to normal levels on January 19th.

Per a data analysis, and consistent with almost all other core updates to this point, Your Money Your Life niches were significantly impacted, more so than other industries (as can be seen in the below graph): 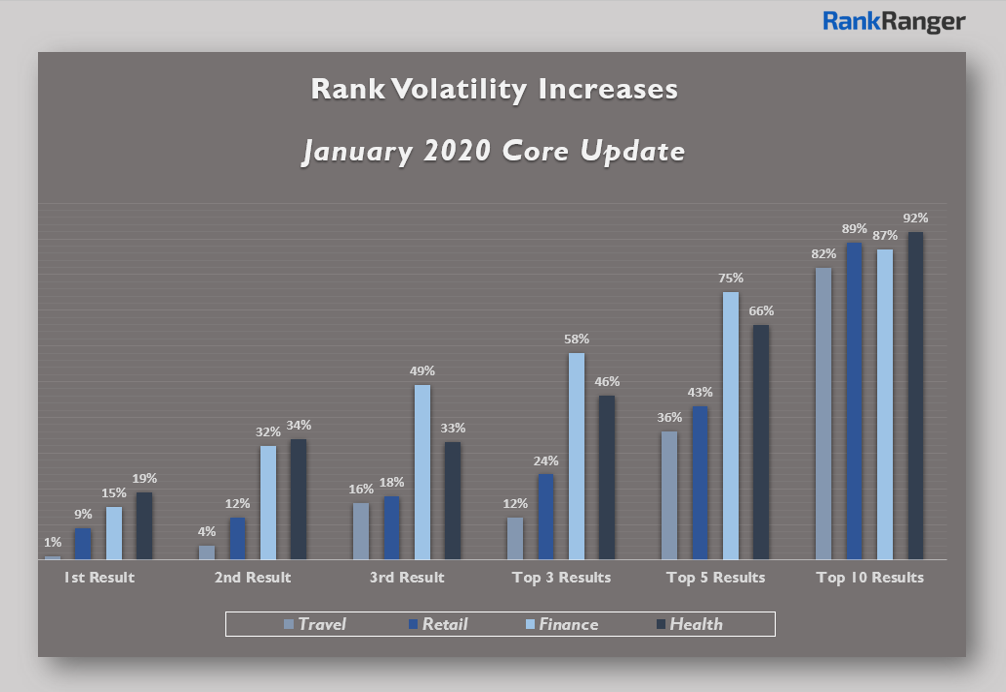 Read our full analysis for more data on the January 2020 Core Update.

Confirmed Update
On December 2, 2019 Google's Danny Sullivan confirmed what the search community had already suspected, the roll-out of a local algorithm update. Officially named the November 2019 Local Update, Sullivan indicated that the update began rolling out in early November 2019.

In specific, the November 2019 Local Update introduced neural matching to the local algorithm. As a result, businesses with titles and descriptions that vaguely related to a vertical may now appear within the top organic results as well as within the Local Pack.

Confirmed Update
On October 25th, Google announced that it had begun to implement its BERT (Bidirectional Encoder Representations from Transformers) algorithm. Per Google, BERT is said to impact 10% of all queries and is the search engine's "biggest leap forward in the past five years."

The algorithm was birthed out of an open-sourced project aimed at using neural networks to advance contextual understanding of content via natural language processing (NLP).

In simple terms, BERT is meant to help better interpret a query by using a contextual understanding of the phraseology employed. This is done as the entire phrase is analyzed at once which lets BERT understand a keyword term according to all of the words used within it. This stands in contrast to models that look at language from left-to-right thereby pinning a word's understanding to that which preceded it.

Practically speaking, BERT helps Google to better understand the use of prepositions within a search query as well as to better comprehend words that have double meanings by using contextual understanding.

Note, there were not large waves of rank fluctuation increases due to BERT's roll-out.

As shown on the Rank Risk Index the update rolled out over the course of two days with rank fluctuation levels reaching a high of 79 on desktop (78 on mobile).

Both the length and level of fluctuations recorded by the index were on the "low side" in comparison to previous core updates. This is evidenced when comparing the rank volatility increases of the September update to the June 2019 Core Update. 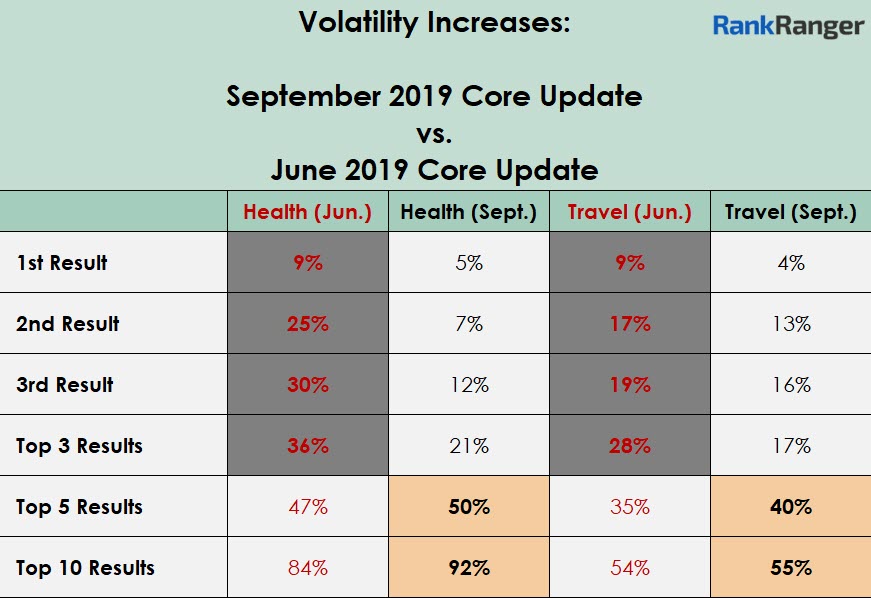 Confirmed Update
On September 16th, 2019, Google made a significant update to its practice of showing reviews within organic results. Per the update, Google no longer allows what it calls "self-serving reviews" to appear on the SERP. This means that sites can no longer use schema markup to place reviews shown on its own website within rich results on the SERP. This applies even to reviews placed on the brand's site via a third-party integration.

As a result, our SERP Feature Tracker indicates a 5 point drop in the number of page one SERPs that contain a review within the organic results.

Google also indicated that the 'name' property must be indicated within the structured data. That is, you must name the product being reviewed.

Lastly, Google released a list of the schema formats that are eligible to produce a review within a rich result.

[You can use our Schema Markup Generator to easily create the code that produces rich results.]

Note, the algorithm was not updated on September 12th itself. Google indicated that it had been implementing and improving on the adjustment throughout the months leading up to the official announcement.

Unconfirmed Update
On July 18th, the Rank Risk Index tracked extremely high levels of rank fluctuations, recording a peak rank fluctuation level of 113. In doing so, the index presented us with one of the largest ranking shake-ups in years.

The update began on July 16th with moderate levels of rank fluctuations being recorded. Those levels jumped slightly on the 17th before reaching an extremely unusual high on July 18th.

The increases shown on the Rank Risk Index coincided with industry chatter that indicated a "massive" amount of rank movement, as was reported by Barry Schwartz on SERoundtable.

An initial look at the data shows that no one niche type was impacted more than another. Unlike some of Google's confirmed core updates, Your Money Your Life sites (YMYL) were not impacted by the update any more than other site types. 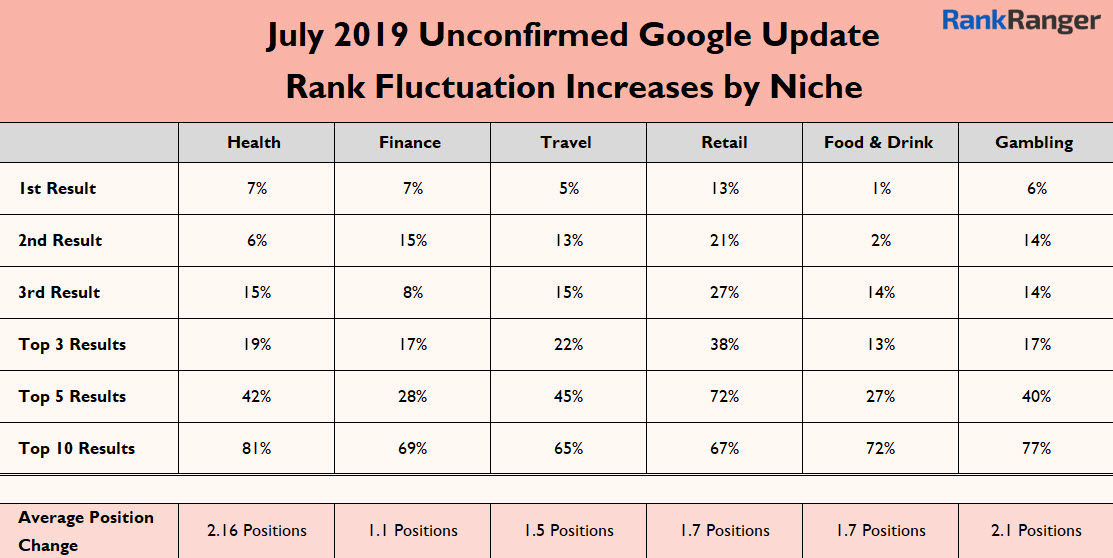